A bride slammed one of her guests’ thank you hamper, saying it was not good enough after she spent $200 on the guest and their date’s dinner.

The bride, only identified as Laura and hailing from near Hamilton, in Canada, chastised the guest for sending the gift instead of a cash envelope after she had spent $34,000 to host 210 guests.

The row, which was reported by the Hamilton Spectator, saw the guest, named Kathy, stand her ground, saying the bride had ‘the etiquette of a twig.’

People agreed with Kathy after the story resurfaced on Reddit, where many said Laura was being entitled and should have stuck to a wedding she could actually afford. 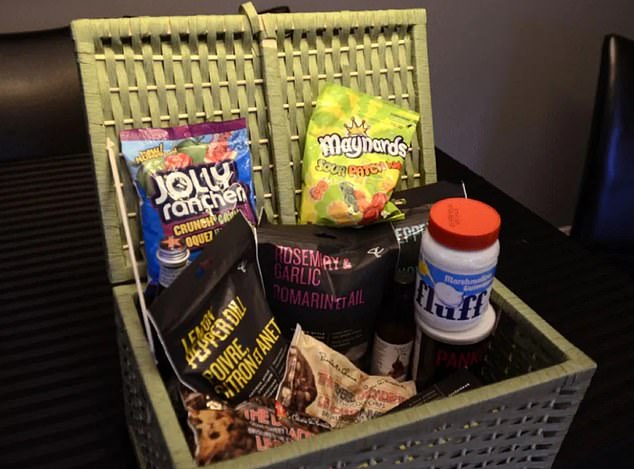 A bride slammed one of her guests’ thank you hamper, saying it was not good enough after she spent £118 on the guest and their date’s dinner. The bride, only identified as Laura and hailing from near Hamilton, in Canada, chastised the guest for sending the gift (pictured) instead of an envelope after she had spent CA$34,000 (£19,805) to host 210 guests

The argument was sparked by Laura’s cold ‘thank you’-text to Kathy after she received the hamper, which contains different types of sweets and biscuits.

It read: ‘I want to thank you for coming to the wedding Friday.

‘I’m not sure if it’s the first wedding you have been to, but for your next wedding … people give envelopes,’ it went on.

‘I lost out on $200 covering you and your date’s plate.… and got fluffy whip and Sour Patch Kids in return,’ the bride added.

When Kathy said she disagreed and thought her gift was thoughtful, Laura said it did not quite measure up to the food, drinks and venue her guests enjoyed during her reception.

She added: ‘Weddings are to make money for your future … not to pay for people’s meals.’

But Kathy hit back at Laura, saying: ‘It’s obvious you have the etiquette of a twig, I couldn’t care less of what you think about the gift you received.

‘”Normal” people would welcome anything given, you wanna have a party, you pay for it, DON’T expect me to,’ she snapped.

Laura told the Spectator that Kathy was one of only two guests who did not give the happy couple money.

Others pointed that some brides had accepted the gifts their guests had brought, assuming they didn’t have money for more

She said her loved ones and friends had made fun of the hamper, which was still on display in her house days after the wedding.

When the row, which took place over the summer, resurfaced on Reddit, many people thought Laura was being entitled.

‘What planet is this horrible bride living on?’ one said. ‘If you don’t like or want the gift, then re-gift the damn thing and move on with your life, you rude hag.

‘You do not write a snarky email to the guest informing them that they should have been aware that they were costing the bride X amount of money and their gift didn’t measure up,’ they added.

‘The part where the bride displayed the gift basket so that others can mock it really made my blood boil. WTF happened to basic manners and respect? This family sucks,’ they went on.

Another person pointed out not every wedding guest could afford to splash on pricey thank you gifts or cash.

‘”Weddings are to make money for your future”???? If you’re that desperate for money don’t blow $200 per person on a fancy wedding you don’t need,’ said another.

‘What a j***. I remember not all my guests gave a card, and you know what, I loved that they were there to dance and laugh and eat with me.

‘I had friends decline to come to my wedding because they couldn’t afford a gift, and I was so confused because I wasn’t inviting them for money. I was really hurt; I’d rather have had them there,’ they added.

Meanwhile, someone pointed out that it’s inevitable to receive a few unusual wedding presents, and that most people are gracious about it. 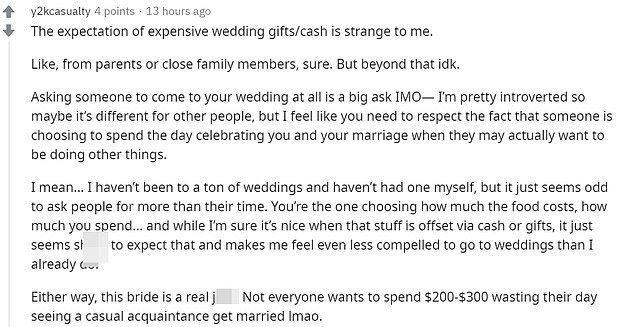 One person said they felt the expectation of expensive gifts or cash was ‘strange’ to them, and pointed out couples should not expect more from guests who had already taken the time to be there for their special day

‘My sister ended up with about six cheeseboards after her wedding, and didn’t complain. She found it pretty funny actually,’ one wrote.

‘Have the wedding you can afford, period,’ one said.

‘What an absolutely heinous person,’ said another.

One person said they thought the expectation guests should splash on gifts was ‘strange.’

‘The expectation of expensive wedding gifts/cash is strange to me,’ they wrote. ‘Like, from parents or close family members, sure. But beyond that I don’t know.’