An anti-vaxxer mother with two autistic children has sparked outrage after going on a foul-mouthed rant in front of her young daughter.

Sarah Mills, 33, from NSW’s Mid North Coast, filmed the expletive-laden rant while waiting in a laundry room with her seven-year-old daughter Monroe.

The single mother said she and her three young kids had been homeless for three weeks before revealing she was due to get her period during the piece to camera. 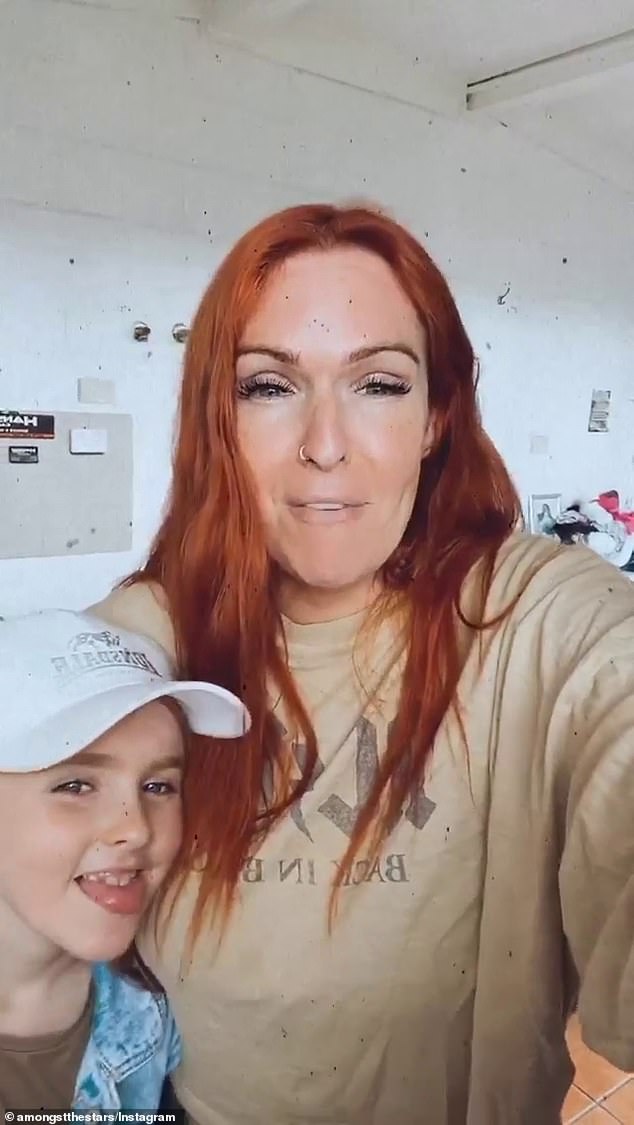 Sarah Mills (right), 33, from NSW’s Mid North Coast, went on an extraordinary rant and swore in front of her seven-year-old daughter Monroe (left)

Ms Mills then lashed out at the viewers who called her out for swearing in front of her daughter.

‘Somebody messaged me so concerned swearing in front of the kids, like I’m pretty sure that’s the least of our f**king worries is a f**king swear word.’

Earlier in her rant, Ms Mills said she was ‘exhausted’ after hitting the three week mark of homelessness with her children.

The single mother slammed those telling her to ‘just move’, saying it was not that easy moving with her three kids who have special needs.

Two of her three children – Hendrix, 10, Monroe, seven, and Morrison, three – have been diagnosed with autism. 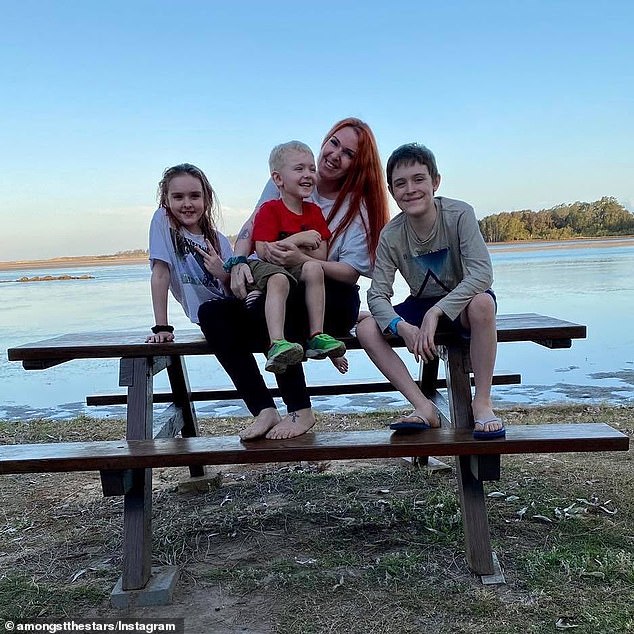 Sarah Mills, 33, (pictured with her children Hendrix, 10, Monroe, seven, and Morrison, three) have been homeless for three weeks 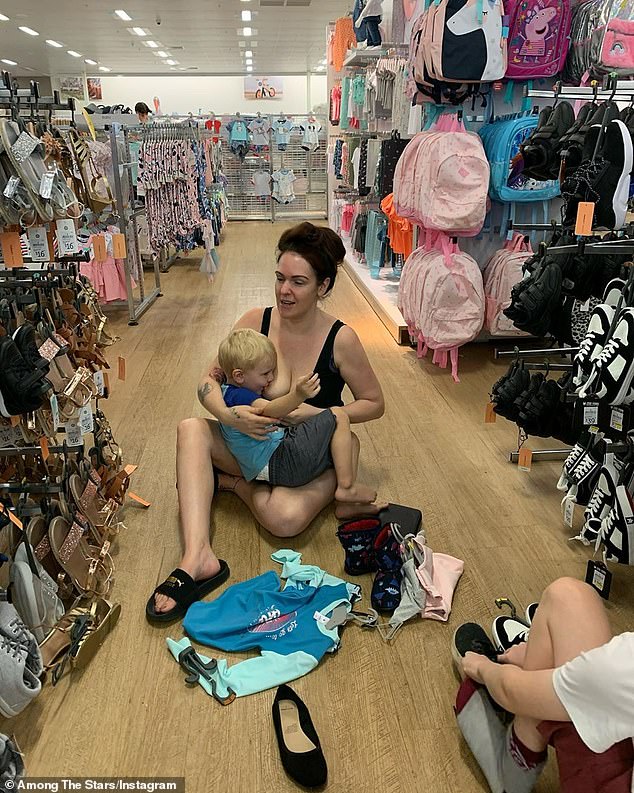 Ms Mills was earlier this year ridiculed online after posting a photo of herself breastfeeding her son Morrison on the floor of a Target store.

She said she suffered an anxiety attack and sat down to calm herself, before her son asked for some milk.

‘I am too deep into single parenting to give a sh** about what others might think and only do what’s “socially acceptable”,’ Ms Mills posted.

‘Morrison came to sit with me asking for a drink, relieved he’d be sitting still for a minute I happily obliged.

‘I had a woman look at me in disgust, I don’t know if it’s because I was on the ground with no f***s to give, because I was breastfeeding in public, or because I was feeding a giant toddler – but in that moment nothing could bother me.’

After sharing the post, Ms Mills was slammed and called a ‘paedophile’ with ‘special needs’ and a ‘filthy lazy mutt.’ 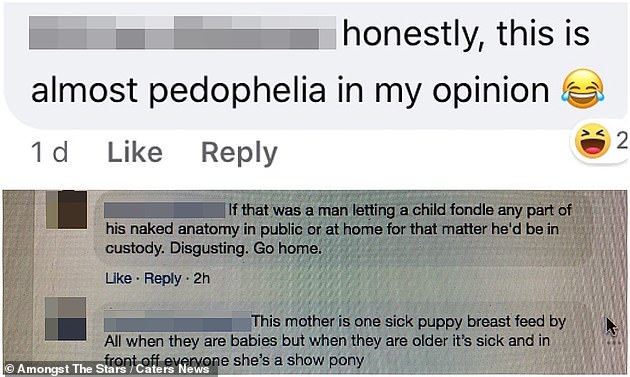 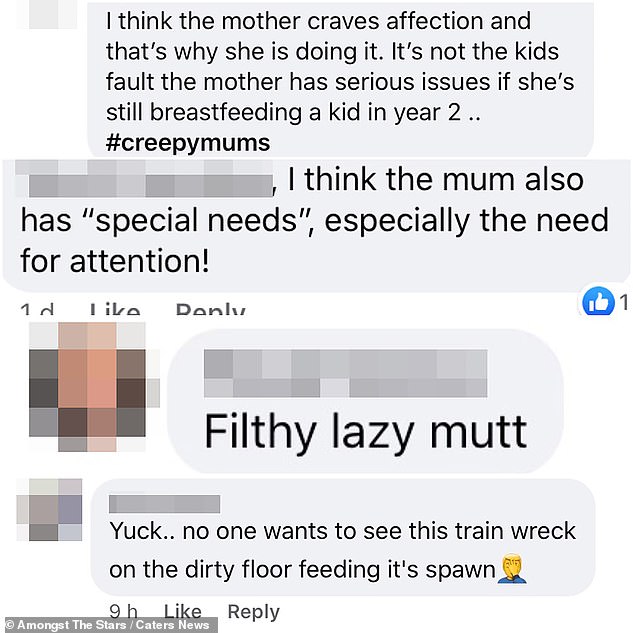 She hit back at the vicious comments in another Instagram post calling for support for breastfeeding in public.

‘What should’ve been an uplifting post (and actually was for so many) promptly turned into a public argument on 1. Breastfeeding in public. 2. Breastfeeding toddlers,’ she posted.

‘I have been labelled a pedophile, whore, child abuser and the list goes on. Society telling me he’s too old or I should feed in private. I had no idea public opinion on this was so nasty.’

Ms Mills was also received a barrage of vile death threats after saying she ‘hates autism’ and wishes her children didn’t have the condition.

She claims to have even been called a ‘child abuser’ and was spammed with hateful messages from people who believe her children should be taken off her. 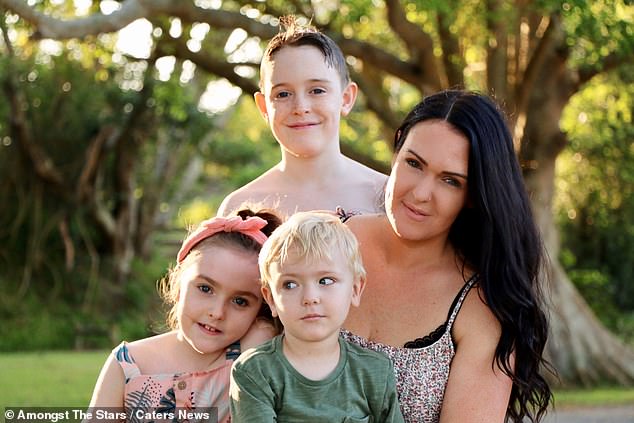 Sarah Mills, 33, (pictured with her children Hendrix, 10, Monroe, seven, and Morrison, three) says she has received death threats after saying she ‘hates autism’. Two of her children have the condition

‘Die in a ditch, you don’t deserve kids you ungrateful ‘b***h,’ one comment said.

‘You’re a narcissistic child abuser and you know it. Some people shouldn’t be allowed to have children and you are definitely one of those people,’ said one troll.

She once again hit out at the disgusting trolls saying all their nasty comments just make her stronger.

‘There have been quite a lot of nasty messages coming in telling me I should die, I should adopt my children out, I don’t deserve to be a mother, threatening to report me to child protection, telling me I’m worthless and self-absorbed and that my children will hate me,’ she said.

‘The nasty messages and comments don’t upset me so much. My life experiences have given me pretty thick skin.’

Kitten rescued after paws get frozen stuck to semi-trailer