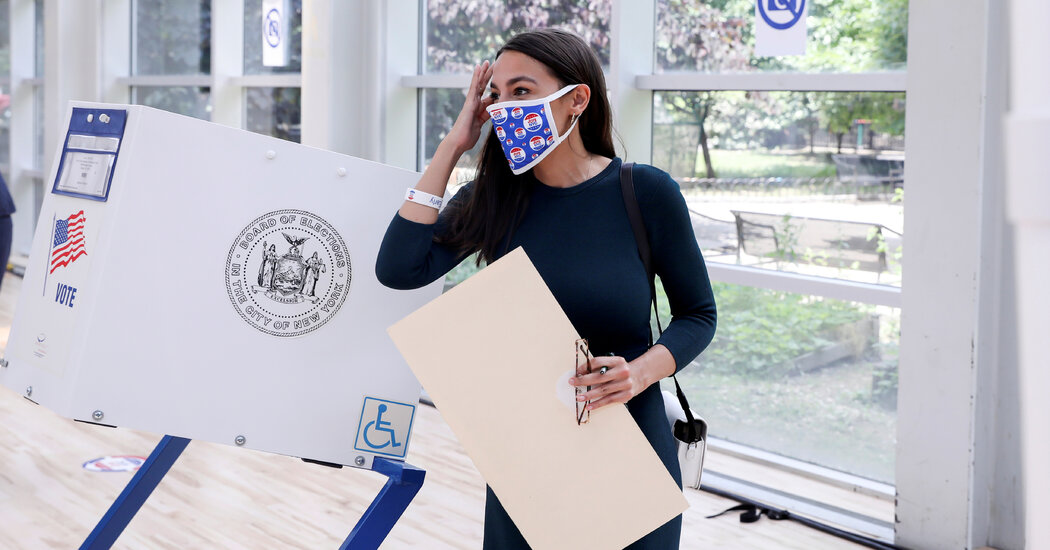 WASHINGTON — Representative Alexandria Ocasio-Cortez forcefully rejected a Republican colleague’s words of contrition on Wednesday after he declined to apologize for referring to her with a vulgar and sexist expletive, denying he had uttered the words.

Representative Ted Yoho, Republican of Florida, appeared on the House floor on Wednesday to express regret for injecting “strife” into Congress and being “abrupt” in a confrontation this week with Ms. Ocasio-Cortez, Democrat of New York.

“I rise today to apologize for the abrupt manner of the conversation I had with my colleague from New York,” Mr. Yoho said. “It is true that we disagree on policies and visions for America, but that does not mean we should be disrespectful.”

But a short time later, he added, “The offensive name-calling words attributed to me by the press were never spoken to my colleagues, and if they were construed that way, I apologize for their misunderstanding.”

Ms. Ocasio-Cortez lashed out at Mr. Yoho on Twitter after his speech, saying that he was refusing to take responsibility for his actions.

“I will not teach my nieces and young people watching that this an apology, and what they should learn to accept,” Ms. Ocasio-Cortez wrote. She said Mr. Yoho was lying when he described their interaction as a “conversation.”

“It was verbal assault,” she wrote. “This is not an apology.”

Ms. Ocasio-Cortez, a favorite of the progressive left and frequent target of Republicans, said on Tuesday that she had been the victim of “virulent harassment.”

In a confrontation on Monday reported by The Hill newspaper, Mr. Yoho approached Ms. Ocasio-Cortez on the Capitol steps and told her she was “disgusting” for suggesting that poverty was driving crime in New York City.

After a brief but tense exchange, the newspaper said in an account later shared by Ms. Ocasio-Cortez on Twitter, Mr. Yoho walked away from her, uttering a vulgar phrase, including an expletive often used to denigrate women.

In the tweet, Ms. Ocasio-Cortez embraced the insult, remarking, “But hey, ‘b*tches’ get stuff done.”

In his comments on Wednesday, Mr. Yoho sought to explain the episode by saying he was passionate about how Americans can rise out of poverty without resorting to lawbreaking, because he had experienced poverty himself.

“I cannot apologize for my passion or for loving my God, my family and my country,” Mr. Yoho said.

“Mr. Yoho needed no apology for his passion about poverty and for the downtrodden,” Mr. Hoyer said. “But he ought to remember and acknowledge that the person to whom he spoke so inappropriately to was one of the strongest fighters in this Congress for those with the least.”

Mr. Yoho’s spokesman said that the congressman acknowledged using profanity during the exchange, but that he had not uttered the words attributed to him, which were heard by the reporter who wrote the story. Instead, the spokesman said, Mr. Yoho had used a barnyard epithet to describe what he thought of Ms. Ocasio-Cortez’s policies.

Ms. Ocasio-Cortez had cheerfully embraced the insult on Tuesday, posting a clip on Instagram from the Doja Cat song “Boss Bitch.”

“You know what we say when fragile men call us b*tches because we stand up for ourselves and other human beings?” she wrote. “Shine on, fight for others, and let the haters stay mad.”

But after Mr. Yoho’s speech on Wednesday, she vented her indignation, noting that the Republican had not apologized to her directly.

“He didn’t even say my name,” Ms. Ocasio-Cortez wrote.

Journalist Natalie Morales: 25 Things You Don’t Know About Me!

Nicolle Flint driven out of politics by ‘bullying and harassment’, says Finance Minister