The U.S. Capitol Police issued an actual permit for Trump supporters to demonstrate on the U.S. Capitol Grounds on January 6, 2021, evidence is now showing, but they are refusing media inquiries for details. This is what newly-analyzed evidence obtained by National File reveals.

This new evidence shows that:

(2) demonstrators arrested for being on Capitol grounds (not for entering the Capitol) are innocent and should be acquitted,

(3) demonstrators did not go from the Ellipse area of the Washington Mall near the White House to the U.S. Capitol at then President Donald Trump’s suggestion and

(4) former President Donald Trump is innocent of inciting anyone to go from the Ellipse to the U.S. Capitol, because the 1:00 PM demonstration at the Capitol was already planned independently,

(5) the U.S. Capitol Plan had weeks of advance notice that enormous crowds were planning to gather on the grounds of the Capitol at 1:00 PM., but failed to prepare

National File has reviewed again video taken from that spot in the Northeast corner of Capitol grounds across 2nd Street, N.E., from the U.S. Supreme Court. The video was obtained by National File on January 6, 2021.

This previously-overlooked detail — a line of Trump protestors waiting in front of the porta-potties shown in the video as this reporter videotaped the entire scene — is confirmation that the U.S. Capitol Police issued a permit for the January 6 pro-Trump demonstration. It is also confirmation that the U.S. Capitol Police knew the demonstration would be very large.

This writer, as Executive Director of the White House Defense Fund, led an event on September 23, 2020, on the Southeast corner of the U.S. Capitol Grounds to present 250,000 petitions to sanction Nancy Pelosi and Adam Schiff for their dishonest handling of their first impeachment of President Donald Trump. We had a permit from the U.S. Capitol Police. But our event was not large enough to require porta-potties. Only a very large demonstration crowd would require that accommodation — paid for by the organization.

Furthermore, on January 6, 2021, a church choir was also set up and singing Christian praises on U.S. Capitol Grounds halfway between the Capitol and the Library of Congress original building to the Southeast, across 2nd Street, S.E.  Video taken for National File contrasts back and forth the choir on one side and the rowdy demonstrations on the other as a curious aspect of the January 6 demonstrations.

However, further analysis of the contrast between a church choir praising God across from demonstrators shouting outside of the Capitol revealed a further detail: The church choir was set up with chairs and sound equipment that again would require a (probably different) permit from the U.S. Capitol Police.

In the experience of the White House Defense Fund, every detail had to be disclosed and confirmed. The U.S. Capitol Police would not allow us to put anything on the grass for fear of harming the grass without a previous approval. We were required to hire qualified movers to place and install our risers (portable stage) and set up the sound equipment, subject to strict details and requirements. Therefore, the church choir’s bank of chairs and sound equipment indicate a permit issued by the U.S. Capitol Police in the Southeast corner of the Capitol grounds. And they indicate that a company had to set up the choir’s location at the U.S. Capitol Police’s direction.

However, unlike the U.S. Park Police. which was very cooperative and answered National File immediately, the U.S. Capitol Police is refusing to answer media inquiries about such permits being issued. This author went back to our contact who had issued the permit for the White House Defense Fund on September 23, 2020. She responded immediately, referring National File’s inquiry to the media office. National File has repeatedly renewed its request for information to that public information office, including leaving phone messages, but has been ignored. National File cannot find any other reporting on the existence of a permit for the January 6, demonstrations at the Capitol.

As late as December 23, 2020, if not earlier, the demonstration at the U.S. Capitol was independently planned: 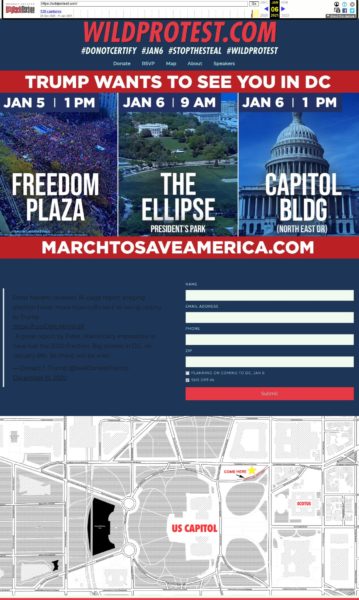 Thus, when Donald Trump mentioned saying that “I know…” people will be heading to the Capitol, he was referring to the previously-planned demonstration on the U.S. Capitol Grounds at 1:00 p.m. Trump was not telling anyone to do anything that they weren’t already planning to do.

It is also uncertain who could hear Trump’s speech on that windy morning to crowds estimated at between 500,000 and 1 million stretching as much as 1.7 miles from the White House.

This reporter at the Ellipse found that the sponsoring organization had set up two banks of massive speakers. However, the left-hand bank of speakers (looking towards the White House) and the right-hand bank of speakers were out of sync, and were conflicting with each other. Therefore, it was very difficult to understand what anyone was saying, including Donald Trump. This author had to shuffle through the crowd to find a place where he could listen to the left-hand bank of speakers without interference from the other bank. It is unknown if anyone who went to the U.S. Capitol could hear what Trump was saying, as Trump’s accusers assume.

Only those wearing ear buds might have been listening on a portable radio or smart phone. (Trump critics claim that a Proud Boys member was seen wearing an earpiece, suggesting something sinister rather than simply listening to the radio to monitor the progress of news events.)

Although no one affiliated with National File entered the Capitol or crossed police lines on January 6, 2021, reporters and volunteers for National File respectfully observed the demonstrations at the Ellipse and outside the U.S. Capitol building, feeding news back to this publication as events were unfolding or shortly after. (Alerts on cellphones through the emergency network ordered a curfew for 6 blocks around the Capitol announced around 4:00 PM to start at a time after that. National File reporters complied and left the area of the Capitol at that time.) National File did break the news of Ashli Babbitt’s murder (in this author’s attorney opinion) by skilled reporting, obtaining video from a source who had been there inside the building.

National File requested from the U.S. Park Police copies of all permits applied for and/or issued for demonstrations on January 5 and 6. The Park Police responded to our media inquiries with copies of the permits (the complete file) for the events at “Black Lives Matter Plaza” on January 5, and at the Ellipse on January 6 at 9:00 AM.

As an additional note of curiosity, this author also encountered the so-called Q Shaman outside of the Capitol, apparently before he entered the Capitol. Jake Angeli, who showed absolutely nothing concerning Q, came to the January 6 demonstration shirtless, wearing a viking helmet with horns and long fur tails, strange symbolic patterns on his chest, and apparently a necklace of bones. When Angeli was wandering around outside the Capitol, he stopped abruptly and cat-called a group of three young, attractive Trump supporters, yelling “Trump, baby!” and then wagged his tongue in an obvious lewd, sexually suggestive gesture. Even though Angeli clearly infiltrated Trump protests starting over a year ago, this author from observing his behavior, dress, and speech is seems likely that he was likely not a typical Trump supporter, and may have been a counter protester attending to discredit those who supported President Trump.

Molly Bernard Shares A Special Message To ‘Younger’ Fans Ahead Of Final Season: ‘Our Fans Are Why We Exist, We Will Miss You’