A man has found a 4.39-carat diamond while sifting through gravel at an Arkansas state park.

Steven McCool, 34, was sifting through his eleventh bucket of dirt – 30 minutes before the Crater of Diamonds State Park was due to close – when he unearthed the  yellow jewel.

‘As my eyes were panning to it, I was thinking it could be an amber piece of glass like an old Coke bottle,’ McCool said. 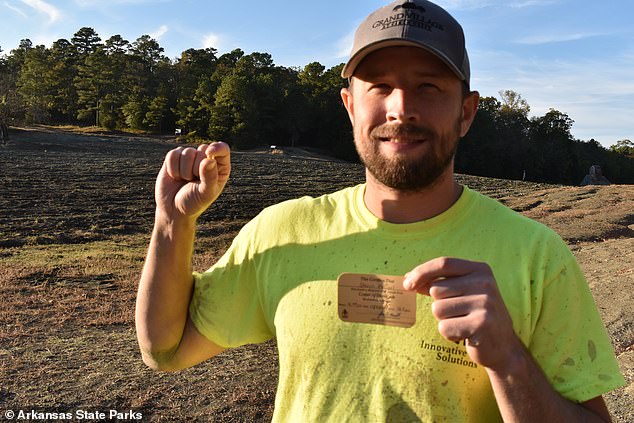 Steven McCool, 34, is pictured holding up his $32,000 diamond at the Crater of Diamonds State Park in Arkansas 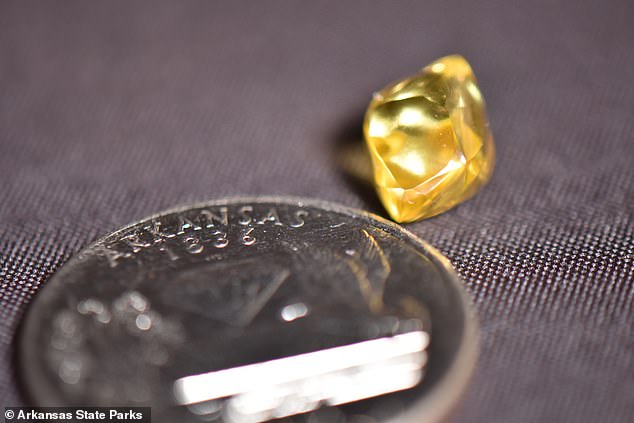 McCool had found a ‘4.49-carat, sparkling, canary yellow diamond’ around ‘the size of a jelly bean’ which seems to have great clarity, Crater of Diamonds State Park Assistant Superintendent Meghan Moore said.

McCool named the stone BamMam, using the initials of his children’s names.

‘What’s more precious than a precious gem? My children. So, I named it after my children and the name will stay with the diamond forever,’ McCool said.

He has not decided whether to keep it or sell it, Fox13 reported. 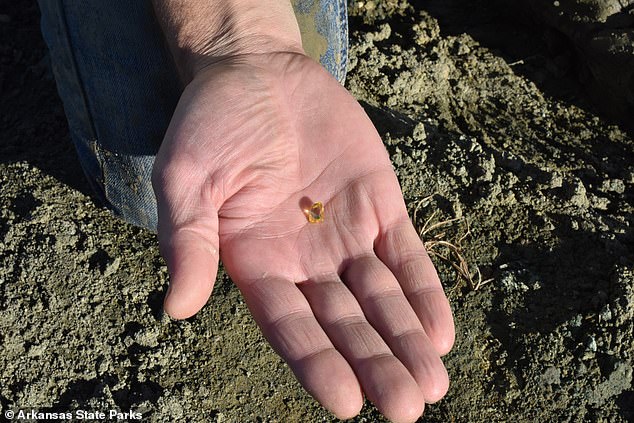 ‘It’s hard to wrap my head around it. I am blown away by the clarity, the beauty, how rare it is. I’m definitely blessed, not lucky. It was the Lord’s work.’

The park is the only diamond mine accessible to the public.  The largest stone found there, dubbed ‘Uncle Sam’, weighed 40.23 carats.

One-hundred-and-seventy-one stones have been registered at the park by diamond hunters in 2020 alone, six of them weighing at least one carat each.

‘Arkansas is the only state in the country that has a diamond mine open to the public,’ said Department of Parks, Heritage and Tourism Secretary Stacy Hurst.

‘While many diamonds are found every year, it never ceases to be exciting! I hope Mr. McCool’s story inspires even more people to visit Crater of Diamonds State Park.’

Kazakh doctors put newborn in freezer to cover up negligence in declaring him stillborn, trial hears