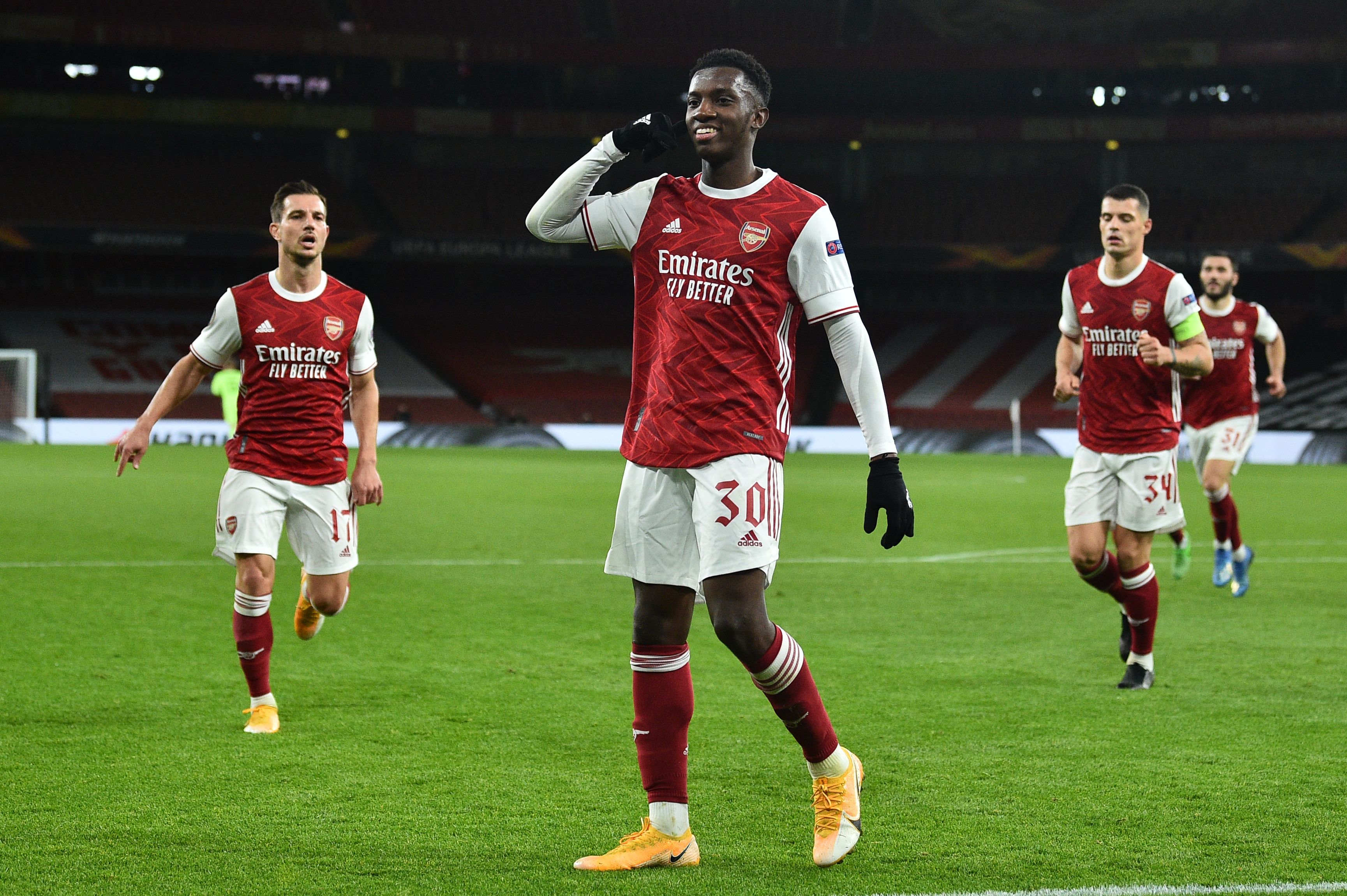 The Gunners had to work hard to open the scoring against their determined visitors, but Eddie Nketiah eventually broke the deadlock on 42 minutes after a mistake by goalkeeper Gary Rogers.

Joe Willock doubled the lead just two minutes later with an excellent touch and finish after Nicolas Pepe’s shot deflected into his path.

Pepe then added a third himself, finding the top corner with a terrific right-footed shot less than minute into the second half.

With a Premier League trip to Manchester United on Sunday, Arteta made 11 alterations from the weekend loss to Leicester, but his team here were still far too strong for the Irish champions.

Alex Runarsson, making his debut in the Arsenal goal, was called into action early on as he dived low to turn a long-range Patrick McEleney effort behind. Arteta opted to play Granit Xhaka in a back three, with his defensive options severely limited through injury and unavailability.

Dundalk’s experienced goalkeeper Gary Rogers was not called into meaningful action until after the half-hour as he tipped a Sead Kolasinac header over the crossbar following smart work from Willock.

Nketiah should have done better when a deflected Pepe shot fell to his feet just seven yards out, but he could only steer the ball wide. But England’s record goalscorer at Under-21 level would make no mistake soon after as Rogers came to punch a corner and got nowhere near the ball, which richocheted off a defender and down to Nketiah, who tucked away his chance.

The lead was doubled moments later as Dundalk again played a part in their downfall, Nketiah gifted possession before picking out Pepe, whose shot was blocked into the feet of Willock, who finished well.

Arsenal needed less than a minute of the second half to move further clear, Pepe finishing superbly from the edge of the box. The rest of the evening was fairly straightforward for the hosts, with Arteta able to wrap Pepe, Xhaka and Shkodran Mustafi in cotton wool for the game at Manchester United in three days’ time.

He also handed a debut to highly-rated young striker Folarin Balogun, while Dani Ceballos and Willian were introduced to increase their respective fitness levels.

The win maintains Arsenal’s perfect start to Group B after the 2-1 victory at Rapid Vienna last week, with Molde travelling to north London next week.

There She Is! Pregnant Chelsea Houska Shares Video of Baby No. 4 Kicking

Jupiter Icy Moons Explorer: What is the 2022 mission searching for?

So Sweet! Shawn Mendes Gets a Tattoo Dedicated to Sister Aaliyah Mendes