A Western Australian woman who suffered a rare blood clot after receiving the AstraZeneca coronavirus vaccine remains in a stable condition following a short stint in intensive care.

The woman in her 40s presented at the emergency department of a regional hospital about a fortnight after receiving the jab in mid-March.

She was flown to Royal Darwin Hospital where she was admitted to intensive care.

She is now in a stable condition.

‘Her family has authorised us to say that her progress has been very positive and that she is recovering well,’ WA health minister Roger Cook told reporters on Tuesday. 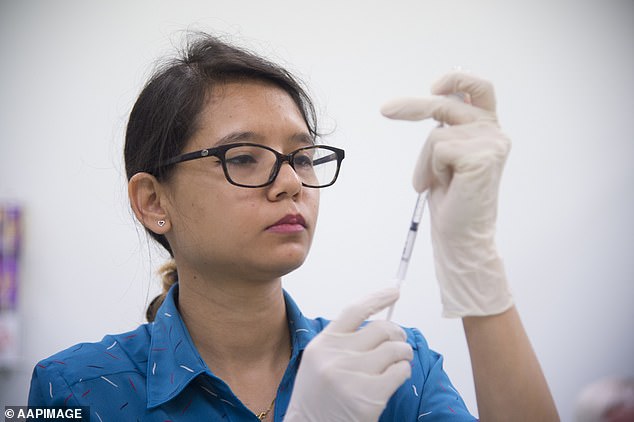 Two Australians have developed blood clots after receiving their first dose of the AstraZeneca vaccine. Pictured is a Darwin nurse preparing a AstraZeneca dose for a patient

People who have received the vaccine have been asked to look out for symptoms including severe or persistent headaches, blurred vision, shortness of breath, chest pain, leg swelling, abdominal pain or unusual bruising.

About 700,000 doses of AstraZeneca vaccines have been administered in Australia, so the two cases equate to a frequency of one in every 350,000 people.

The Pfizer jab is now the preferred option for people under the age of 50.

But Mr Cook said anyone under 50 in WA will still be able to request the more widely available AstraZeneca vaccine once informed consent arrangements are finalised.

‘We can’t continue to believe that we are immune from this global pandemic,’ he said.

‘We have to make sure that we can step forward in this vaccination program as part of a global effort to make everyone safe. Otherwise we’re just sitting ducks.’ 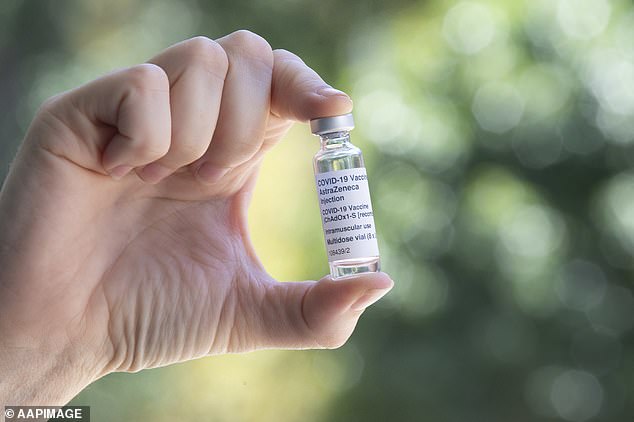 A Western Australian woman developed blood clots two weeks after receiving AstraZeneca Covid-19 vaccine. Pictured is a dose of the vaccine in Perth

A crew member from a bulk iron ore carrier docked off the coast of WA is meanwhile in a stable condition after being hospitalised in Perth.

The man in his 50s became unwell last week while aboard the AquaGenie vessel in Commonwealth waters off the coast of Karratha.

A boat was sent to retrieve the man, who is now in a negative pressure room at Royal Perth Hospital after initially being taken to Karratha Health Campus.

Mr Cook said there were no reports of illness among the remaining 23 crew.

A legal direction has been issued blocking the ship from entering WA waters and it is expected to return to the Philippines in coming days. 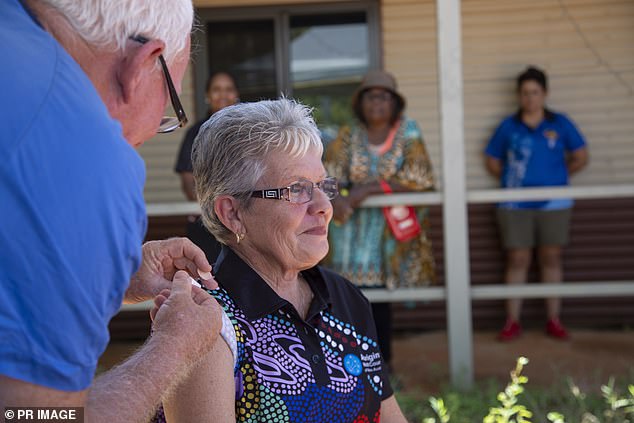 The use of the Pfizer vaccine is now preferred over AstraZeneca in Australians aged under-50s. Pictured is a woman receives a coronavirus vaccine in a remote Aboriginal community in Western Australia’s Kimberley region

* Australians who have had their first dose of the AstraZeneca vaccine without any serious adverse events can safely be given their second dose, including those under 50

HOW WILL THIS AFFECT AUSTRALIA’S COVID-19 VACCINATION ROLLOUT?

* Rollout plan will be recalibrated and re-evaluated

William’s tribute to Philip was not a dig at Harry, says friend Omid Scobie