Now former Attorney General Bill Barr told President Donald Trump in December that his widespread voter fraud claims were ‘bulls**t’ and the legal team he was assembling was ‘clownish.’

Axios reported Monday on the fallout between Trump and Barr, who resigned from his perch at the Justice Department on December 23.

The relationship began to fray over the summer when the president wanted to use military force against Black Lives Matter demonstrators in cities like Portland, an inclination Barr pushed back on. 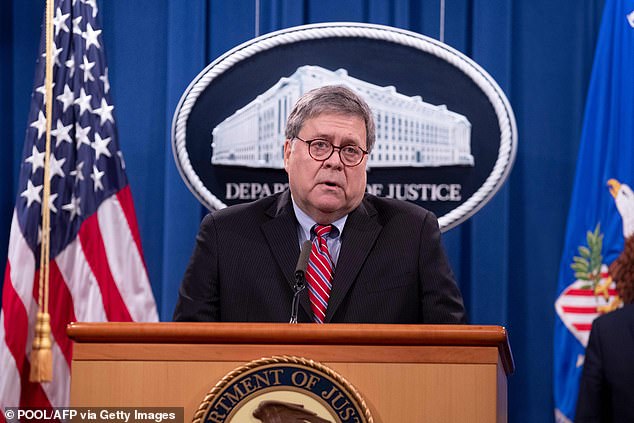 Barr, according to Axios’ reporting, thought Trump’s ideas were too aggressive and likened their conversations to the movie ‘Groundhog Day,’ as the same arguments happened over and over again.

Trump would throw tantrums when Barr questioned what he would do with troops in major U.S. cities.

Barr pointed out that the troops could be stranded in Portland and other cities indefinitly.

‘No one supports me,’ Trump yelled at one point. ‘No one gives me any f***ing support.’

Axios said that Barr acted like a ‘heat shield’ between the president and the chairman of the Joint Chiefs of Staff Mark Milley and Defense Secretary Mark Esper.

Milley and Esper, like Barr, believed deploying troops to Portland was a bad idea.

After a summer of fighting, Barr tried to avoid Trump through the fall.

And the attorney general was largely successful because the president was on the campaign trail so much.

But after the November 3 election, Trump needed Barr to push his election fraud narrative.

Barr had asked the DOJ to speed up federal investigations of election fraud allegations, but that wasn’t enough for Trump – as the evidence investigators sought didn’t exist.

In turn, Barr gave an interview to an Associated Press reporter, Michael Balsamo, where he said publicly there was no widespread election fraud.

Barr knew the story could go live as he was going into a White House meeting on December 1.

And Trump did confront him over the AP headline: ‘Disputing Trump, Barrs says no widespread election fraud.’

Barr responded that, ‘these things aren’t panning out.’

‘The stuff that these people are filling your ear with just isn’t true,’ he said, according to Axios.

Barr explained that the DOJ had looked into these fraud allegations that Trump’s lawyers like Rudy Giuliani and Sidney Powell were peddling.

‘I’m a pretty informed legal observer and I can’t fucking figure out what the theory is here,’ Barr continued. ‘It’s just scattershot. It’s all over the hill and gone.’

Trump responded with a, ‘maybe.’

On December 14, Barr met with Trump and argued that it was best for him to step aside.

Fossils: 98 million-year-old dino unearthed in Argentina may have been the largest land animal ever

Mother makes a huge blunder while cleaning her kitchen hob – so can YOU spot what’s wrong?