Bernie Sanders vowed to push for an increased minimum wage to be included the COVID package after the Senate parliamentarian ruled the $15 per hour hike cannot be a part of the $1.9 trillion relief plan.

Sanders slammed the decision. He is one of many progressives pressuring Democratic leadership to find a way around the ruling so the wage increase can become law.

He said he’d propose an amendment that would pair the wage increase with a tax penalties on corporations that don’t pay a higher minimum wage – a move that could change whether it meets the parliamentarian’s criteria for inclusion.

‘I will be working with my colleagues in the Senate to move forward with an amendment to take tax deductions away from large, profitable corporations that don’t pay workers at least $15 an hour and to provide small businesses with the incentives they need to raise wages,’ he said in a statement Thursday night.

‘That amendment must be included in this reconciliation bill,’ he added. 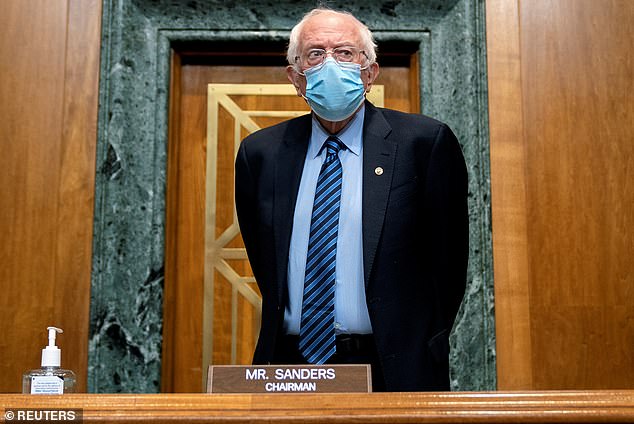 He said there is support to make a $15 minimum wage the law of thd land.

‘I’m confident that we have a majority in the United States Senate including the Vice President that would vote to increase the minimum wage to $15 an hour as part of President Biden’s American Rescue Plan,’ Sanders said.

‘Yet because of the archaic and undemocratic rules of the Senate we are unable to move forward to end starvation wages in this country and raise the income of 32 million struggling Americans. That fight continues,’ he said.

Senate parliamentarian Elizabeth MacDonough dealt a potentially lethal blow to Democrats’ call for a $15 per hour wage when she ruled Thursday night that the provision was not compliant with the rules governing the budget process that Congress is using to pass the bill with simple majorities.

Democrats pushed to have the COVID relief bill passed through a process called reconciliation, which would keep the GOP from filibustering it and allow it to pass with a simple majority. 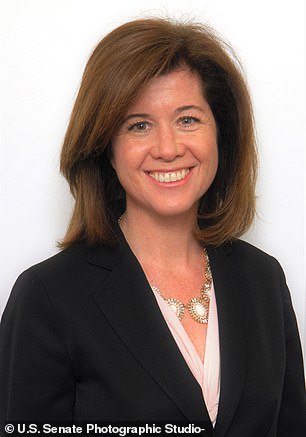 Senate parliamentarian Elizabeth MacDonough (pictured) dealt a huge blow to Democrats when she ruled their $15 minimu wage could not be included in the $1.9trillion COVID-19 relief bill

But, by invoking reconciliation, they also invoked what is called the ‘Byrd rule’ –  which limits acceptable provisions in the reconciliation process to taxing and spending.

MacDonough, the Senate’s nonpartisan arbiter of its rules, ruled the wage hike does not meet those standards.

Her ruling was not a surprise. Even President Joe Biden predicted the wage hike was likely not to meet the reconciliation requirements for inclusion.

But, given the opposition to the wage hike from some moderate Democrats and many Republicans, the COVID relief package was seen as the strongest chance for making it the law.

‘I strongly disagree with tonight’s decision by the Senate Parliamentarian,’ Sanders said.

The Vermont senator pointed to a nonpartisan Congressional Budget Office study out earlier this month that found the $15 wage proposal would cost jobs but would also lift nearly one million out of poverty.

Sanders and other progressives argued the findings showed a monetary impact, meaning the minimum wage hike could be included in the COVID relief plan.

‘The CBO made it absolutely clear that raising the minimum wage to $15 an hour had a substantial budgetary impact and should be allowed under reconciliation,’ Sanders said Thursday night.

MacDonough’s ruling already is causing fractions in the Democratic Party as progressives push for leadership to find away around her decision to get the wage increased passed.

Some liberals have argued that Vice President Kamala Harris, in her role as president of the Senate, can overrule the parliamentarian.

‘I’m sorry – an unelected parliamentarian does not get to deprive 32 million Americans the raise they deserve,’ Democratic Representative Ro Khanna wrote on Twitter. ‘This is an advisory, not a ruling. VP Harris needs to disregard and rule a $15 minimum wage in order. We were elected to deliver for the people. It’s time we do our job.’

But White House chief of staff Ron Klain said earlier this week that would not happen.

‘Certainly, that’s not something we would do,’ he told MSNBC host Joy Reid. ‘We´re going to honor the rules of the Senate and work within that system to get this bill passed.’

And Rep. Ilham Omar of Minnesota took things a step further when she called for MacDonough to be fired.

‘Replace the parliamentarian. What’s a Democratic majority if we can’t pass our priority bills? This is unacceptable,’ she tweeted.

Given the 50-50 breakdown on the Senate, Democrats need every one of their members to vote with them.

Republicans solidly oppose the $15 minimum wage target as an expense that would hurt businesses and cost jobs. They also oppose the overall relief bill, saying it’s too expensive.

The House is set to vote on the $1.9 trillion COVID relief plan on Friday. Their version includes the $15 minimum wage hike.

‘House Democrats believe that the minimum-wage hike is necessary,’ Speaker Nancy Pelosi said in a statement. ‘Therefore this provision will remain in the American Rescue Plan on the floor tomorrow. Democrats in the House are determined to pursue every possible path in the Fight for 15.’ 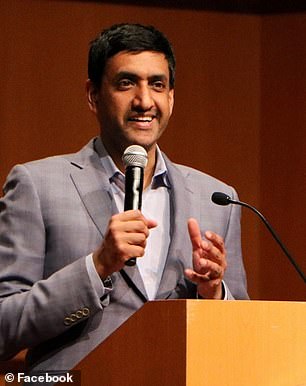 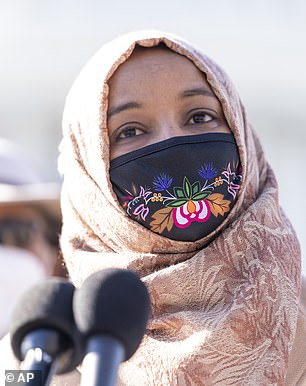 Progressives are furious at Senate parliamentarian Elizabeth MacDonough’s ruling: Representative Ro Khanna called for Democratic leadership to overturn it while Congresswoman Ilhan Omar called for MacDonough to be fired 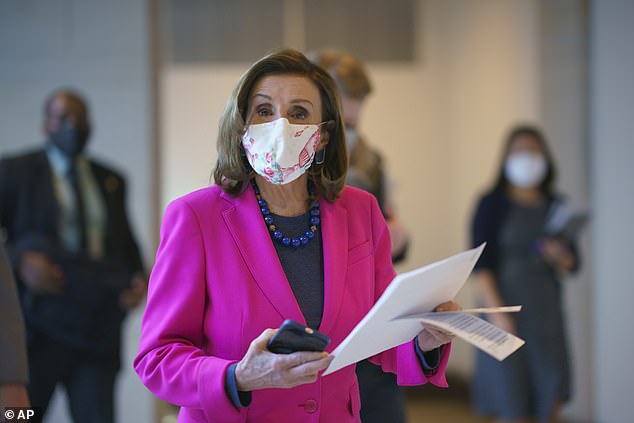 The House is set to vote on the $1.9 trillion COVID relief plan on Friday and Speaker Nancy Pelosi said their legislation would include the $15 minimum wage

The White House expressed its disappointment in MacDonough’s ruling.

White House press secretary Jen Psaki released a statement saying: ‘President Biden is disappointed in this outcome, as he proposed having the $15 minimum wage as part of the American Rescue Plan.

‘He respects the parliamentarian’s decision and the Senate’s process. He will work with leaders in Congress to determine the best path forward because no one in this country should work full time and live in poverty.’

Senate Majority Leader Chuck Schumer also voiced his frustration: ‘We are deeply disappointed in this decision. We are not going to give up the fight to raise the minimum wage to $15 to help millions of struggling American workers and their families.’

He vowed to find a way to make the wage hike law.

‘The American people deserve it, and we are committed to making it a reality.’

Deja McClendon On Athletes Unlimited Volleyball: ‘We Really Want To See This Grow’

Another 100 migrants are set to arrive on UK shores today