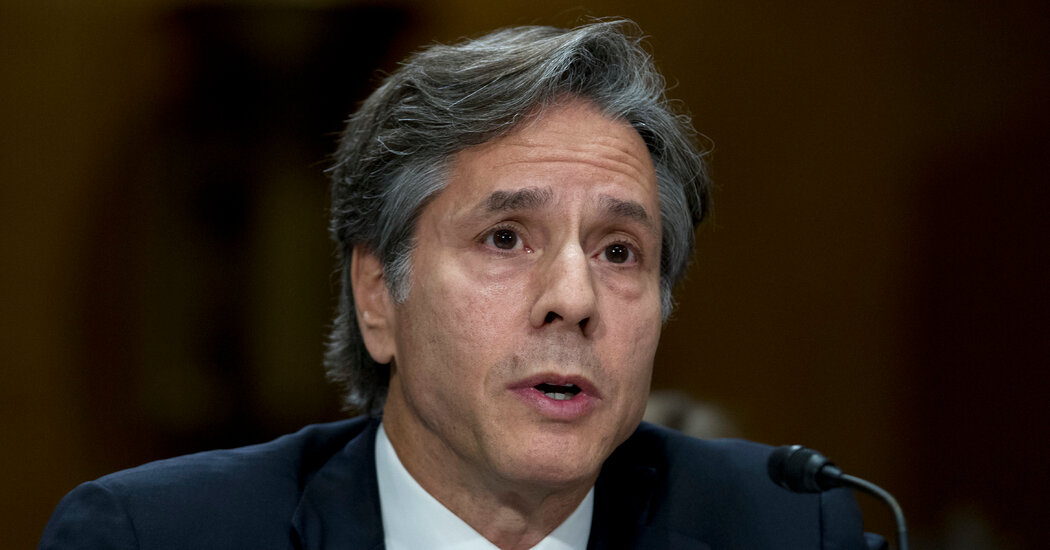 WASHINGTON — Antony J. Blinken, a defender of global alliances and one of President-elect Joseph R. Biden Jr.’s closest foreign policy advisers, is expected to be nominated for secretary of state, a job in which he will attempt to coalesce skeptical international partners into a new competition with China, according to people close to the process

Mr. Blinken, 58, a former deputy secretary of state under President Barack Obama and a guitar aficionado, began his career at the State Department during the Clinton administration. His extensive foreign policy credentials are expected to help calm American diplomats and global leaders alike after four years of the Trump administration’s ricocheting strategies and nationalist swaggering.

He has been at Mr. Biden’s side for nearly 20 years, including as his top aide on the Senate Foreign Relations Committee and later as Mr. Biden’s national security adviser when he was vice president. In that role, Mr. Blinken helped develop the American response to political upheaval and ensuing instability across the Middle East, with mixed results in Egypt, Iraq, Syria and Libya.

But chief among his new priorities will be to re-establish the United States as a trusted ally that is ready to rejoin global agreements and institutions — including the Paris climate accord, the Iran nuclear deal and the World Health Organization — that were jettisoned by President Trump.

“Simply put, the big problems that we face as a country and as a planet, whether it’s climate change, whether it’s a pandemic, whether it’s the spread of bad weapons — to state the obvious, none of these have unilateral solutions,” Mr. Blinken said this past summer. “Even a country as powerful as the United States can’t handle them alone.”

Working with other countries, Mr. Blinken said in the same July forum at the Hudson Institute, could have the added benefit of confronting another top diplomatic challenge: competing with China by choosing multilateral efforts to advance trade, technology investments and human rights — instead of forcing individual nations to choose between the two superpowers’ economies.

That likely means diplomatic time spent forging stronger ties with India and across the Indo-Pacific region, where 14 nations recently signed one of the world’s largest free trade agreements with China. It will also could bring an effort to deepen engagement across Africa, where China has made inroads with technology and infrastructure investments, and recognize Europe as a partner of “first resort, not last resort, when it comes to contending with the challenges we face,” he said at the Hudson Institute.

Described by some as a centrist with a streak of interventionism, Mr. Blinken has also sought to lessen refugee crises and migration. On the last day of the Obama administration, the State Department set a cap of 110,000 refugees who would be allowed to resettle in the United States in the 2017 fiscal year. That number has since dwindled to 15,000 in the 2021 fiscal year.

He has said he will look to further assist Guatemala, Honduras and El Salvador — the Northern Triangle countries of Central America — to convince migrants that they will be safer and better off by remaining home.

That all will likely leave less time and resources for the Middle East, he has said, although that was the policy area that consumed Mr. Blinken in the years after the terror attacks of Sept. 11, 2001, and the 2003 invasion of Iraq.

He helped craft Mr. Biden’s proposal in the Senate to create three autonomous regions in Iraq, partitioned by ethnic or sectarian identity, which was widely rejected by the country’s prime minister. During the Obama administration, Mr. Blinken was a key player in diplomatic efforts to harness more than 60 countries to counter the Islamic State in Iraq and Syria.

In contrast to some of his pricklier colleagues in the Obama administration, Mr. Blinken chatted up journalists in Baghdad in 2012 for insights beyond what soldiers, diplomats and intelligence officers were hemmed inside the embassy compound could provide.

Before taking a job at the State Department’s bureau for European policy in 1993, Mr. Blinken had aspired to be a journalist or film producer. He honed media skills by becoming a foreign policy speechwriter for President Bill Clinton and, later, oversaw European and Canadian policy on the White House National Security Council.

Mr. Blinken grew up in New York and in Paris, graduating from Harvard and Columbia Law School. He is also the stepson of a Holocaust survivor and has often spoken of the moral example the United States sets for the rest of the world.

“In times of crisis or calamity, it is the United States that the world turns to first and always,” Mr. Blinken said at a 2015 speech at the Center for a New American Security.

“We are not the leader of first choice because we’re always right or because we’re universally liked or because we can dictate outcomes,” he said. “It’s because we strive to the best of our ability to align our actions with our principles, and because American leadership has a unique ability to mobilize others and to make a difference.”