Biden Urges Unity: ‘We’re at War With the Virus, Not With One Another’ 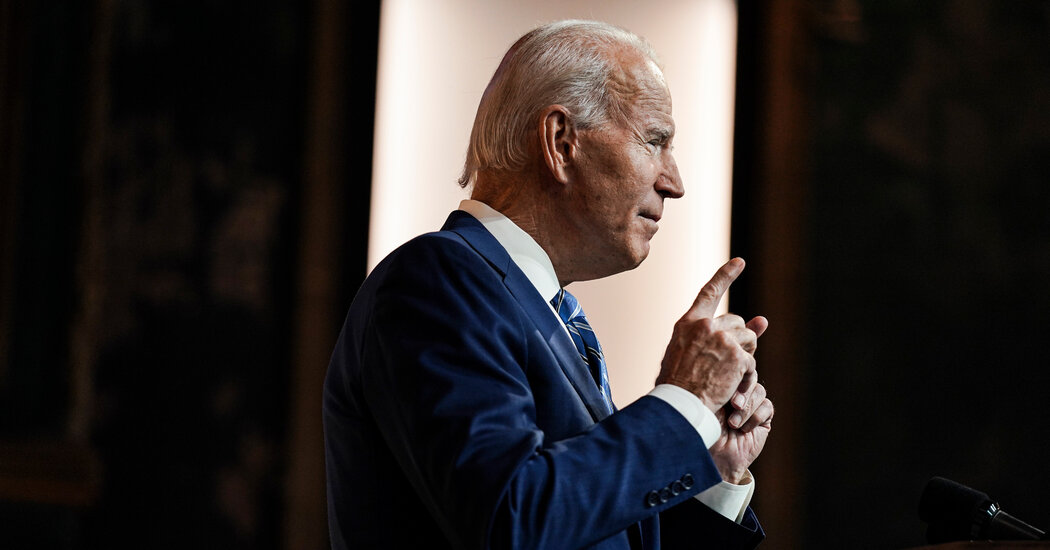 WASHINGTON — President-elect Joseph R. Biden Jr. on Wednesday delivered a raw but optimistic address to Americans in his first nonpolitical speech since winning the election, pleading with the nation to “hang on” and have hope even with the number of coronavirus cases spiking across the country and a hard winter on the horizon.

“Looking back over our history, you see that it’s been in the most difficult circumstances that the soul of our nation has been forged,” Mr. Biden said, speaking directly to the camera from a stage at the Queen, a historic theater in Wilmington, Del., where he stepped into a void left for him by President Trump, who has been rarely seen since the election.

In an implicit repudiation of Mr. Trump, who has dismissed the coronavirus as the flu and mocked people who wear masks, Mr. Biden urged Americans to see it as their patriotic duty to fight the pandemic together by taking the proper precautions. “I know the country has grown weary of the fight,” he said. “We need to remember we’re at war with the virus, not with one another, not with each other.”

As he urged Americans to wear face masks, practice social distancing and limit the size of group gatherings, especially around the holidays, he noted: “None of these steps we’re asking people to take are political statements. Every one of them is based on science, real science.”

He said he hoped the good news about effective vaccines would “serve as an incentive to every American to take these simple steps to get control of the virus. There’s real hope, tangible hope. So hang on.”

In the two and a half weeks since Mr. Biden won the election, he has been spreading a message of unity in an effort to reach the nearly 74 million Americans who voted for Mr. Trump. On the eve of Thanksgiving, he also addressed the pandemic head on with a mix of realism and hope.

“Many local health systems are at risk of being overwhelmed,” he said. “That’s the plain and simple truth. Nothing made up, it’s real. I believe you always deserve to hear the truth, hear the truth from your president.” He added, “Each of us has a responsibility in our own lives to do what we can do to slow the virus.”

Mr. Biden, aides said, decided about 10 days ago to give a Thanksgiving address as he watched coronavirus cases spiking across the country and thought about how his own typically large family gathering was going to be scaled down this year. (In his speech, he said he would be celebrating at home with his wife, Jill, their daughter, Ashley, and her husband.)

Mr. Biden spoke minutes after Mr. Trump called into a hotel gathering of Republican state lawmakers in Gettysburg, Pa., to discuss with them and his personal lawyer, Rudolph W. Giuliani, baseless allegations of voting irregularities in the state. Mr. Trump again claimed he won the election he had lost and demanded that the election results be “turned” in his favor.

The president had intended to appear there in person, but he abruptly canceled those plans after a campaign adviser who had been near Mr. Giuliani tested positive for the coronavirus. Later in the day, Mr. Trump invited some of the Pennsylvania lawmakers to the White House to discuss what a person familiar with the situation said were voting irregularities. Mr. Trump did the same thing with a group of Michigan lawmakers — he pressured them to not certify Michigan’s 2020 election vote, which went for Mr. Biden — but it failed to work.

In contrast to Mr. Trump’s feckless efforts to overturn the election results, Mr. Biden praised the sanctity of the vote in his speech and commended Americans for casting their ballots in record numbers despite the pandemic. “Our democracy was tested this year,” he said. “What we learned is this: The people of this nation are up to the task. In America, we have full and fair and free elections. And then we honor the results.”

He called voting “the noblest instrument of nonviolent protests ever conceived.”

Mr. Trump, in the early days of the pandemic, had tried to brand himself a “wartime president,” before claiming, inaccurately, that the country had “rounded the curve.” Mr. Biden on Wednesday appeared to pick up the wartime mantle, describing the coronavirus pandemic as “a nearly yearlong battle” that has “devastated this nation.”

“America is not going to lose this war,” he said, reminding people, “Don’t let yourself surrender to the fatigue.”

Mr. Biden also tried to paint an optimistic vision of the future, despite the current crisis, and asked Americans to “dream again.”

Mr. Biden’s speech was infused with his own experience of devastating loss, which he often cites when he speaks to a nation that has so far lost more than 260,000 lives to the virus.

“I remember that first Thanksgiving, the empty chair, the silence,” he said, referring to the death of his son Beau Biden in 2015. “It takes your breath away. It’s really hard to care. It’s hard to give thanks. It’s hard to even think of looking forward. It’s so hard to hope. I understand.”

Mr. Trump had no plans to deliver any holiday message of his own. On Tuesday, he took part in the annual turkey pardon, a White House tradition that counted as one of his only public appearances since the election.

On Wednesday, after Mr. Biden’s address, the president announced on Twitter that he had pardoned the first of his four national security advisers, Michael T. Flynn, who had twice pleaded guilty to lying to the F.B.I. about his conversations with a Russian diplomat and whose prosecution Attorney General William P. Barr tried to shut down.

Mr. Biden and his aides were trying to treat the last gasps of Mr. Trump’s presidency as a side show. In a conference call with reporters on Wednesday morning, transition officials said the president-elect did not need Mr. Trump to concede in order to carry on with the necessary business before them that began this week after the head of the General Services Administration formally acknowledged the election results.

“We do not feel that it is necessary for President-elect Biden to speak with President Trump,” Kate Bedingfield, a deputy campaign manager for Mr. Biden, said on a conference call with reporters. “We believe we’re getting the information our teams need.”

Employers CAN make the coronavirus vaccine mandatory at the workplace

Democrats Rush to Turn Out Black Voters in Georgia, Looking Beyond Atlanta

More Than 100 Flights Canceled At O’Hare Amid Snowstorm

PAUL THOMAS on… quarantine for travellers