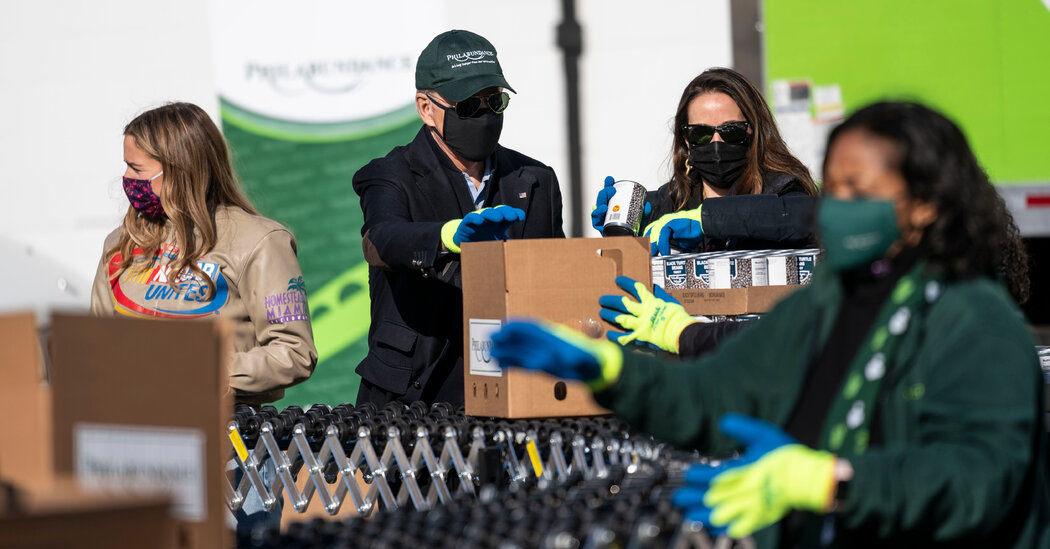 WASHINGTON — President-elect Joseph R. Biden Jr. will arrive in the nation’s capital on Tuesday evening for an inauguration eve ceremony at the Lincoln Memorial Reflecting Pool honoring the nearly 400,000 people who have died during the coronavirus pandemic that will be his first priority after he is sworn in the next day.

The somber remembrance will kick off two days of in-person and virtual events as Mr. Biden takes the oath of office on Jan. 20, becoming the 46th president of the United States at a time of economic struggle and cultural upheaval in the wake of President Trump’s four years in the White House.

Mr. Biden has planned a mix of celebratory, upbeat events to mark the occasion — the singer Garth Brooks was the most recent addition to the list of those performing at his swearing-in ceremony — along with more serious moments aimed at marking the grim times that many Americans are facing as he takes office.

Instead of an in-person parade along Pennsylvania Avenue, Mr. Biden’s inaugural committee on Monday provided details about a virtual “Parade Across America” that will start at 3:15 Wednesday afternoon after Mr. Biden’s swearing-in.

The parade will be kicked off with Mr. Biden and Vice President-elect Kamala Harris walking to the White House escorted by drum lines from the University of Delaware and Howard University, their alma maters. The virtual “parade” will include performances by the United States Coast Guard Band and the U.S. Marine Corps Silent Drill Platoon as well as marching bands, drill teams, scout troops, dancers and drummers from around the country.

The events will be live-streamed on multiple platforms, officials said.

On Tuesday, Mr. Biden and Ms. Harris, along with their families, will be present as 400 lights are turned on to illuminate the perimeter of the Reflecting Pool. Each light is meant to represent approximately 1,000 Americans who will have perished from the virus at the time of his swearing-in.

That event will kick off “a national moment of unity” at 5:30 p.m. Eastern that will include similar memorials at the Empire State Building, the Space Needle in Seattle and other landmarks across the country, with events also planned for Mr. Biden’s hometowns, Scranton, Pa., and Wilmington, Del.

The inauguration “represents the beginning of a new national journey — one that renews its commitment to honor its fallen and rise toward greater heights in their honor,” the inaugural committee’s chief executive, Tony Allen, the president of Delaware State University, said in a statement.

Cardinal Wilton Gregory, the archbishop of Washington, will deliver the invocation at the Lincoln Memorial event. Two acclaimed gospel singers, Yolanda Adams and Lori Marie Key, will perform at the commemoration.

In recent days, the committee’s staff has reached out to church and civic leaders around the country to participate in the memorial, with a particular focus on involving Black and Latino communities, which have been disproportionately hit by the pandemic.

Mr. Biden has said reaching out to people who opposed his candidacy will be a central theme of his inaugural address as he urges a divided America to come together to confront the pandemic and other challenges.

On Monday, officials announced that Mr. Brooks would perform on Wednesday afternoon, adding to a growing list of celebrities who will be on hand to usher in the Biden era. In a briefing with reporters, Mr. Brooks said he was honored to be part of the peaceful transfer of power.

“I just feel lucky to get to be part of this,” Mr. Brooks said. “And what the administration right now is pushing, the main message is unity. Right down my alley, because I think if we’re going to get anywhere, we’re going to get there together.”

Joseph R. Biden Jr. will become president of the United States at noon on Jan. 20 in a scaled-back inauguration ceremony. While key elements will remain traditional, many events will be downsized and “reimagined” to better adapt the celebration to a nation battling the coronavirus. Mr. Biden will be sworn in by Chief Justice John G. Roberts Jr. on the Capitol’s West Front sometime before noon. The new president is then expected give his inaugural address and conduct a review of military troops, as is tradition. But instead of a traditional parade before cheering spectators along Pennsylvania Avenue as the new president, vice president and their families make their way to the White House over a mile away, there will be an official escort with representatives from every branch of the military for one city block.

President Trump announced Friday that he would not attend Mr. Biden’s inauguration. Mr. Biden called that decision “one of the few things he and I have ever agreed on. Still, it is a major break with tradition for a president to skip the ceremonial heart of the country’s democracy: the peaceful transfer of power.

George W. Bush, has confirmed he would travel to Washington for Inauguration Day, along with Laura Bush, the former first lady. Barack Obama and Bill Clinton are also expected to attend, along with former first ladies Michelle Obama and Hillary Clinton. This year, tickets are not available to members of the public. Planners are urging people to stay home and participate in virtual inaugural events to prevent large crowds that could easily spread the coronavirus. Events will be live streamed by the Presidential Inaugural Committee and by The New York Times.

The 20th Amendment to the Constitution requires that the term of each elected president and vice president begin at noon Jan. 20 of the year after the election. Every president has taken the oath of office, and they cannot assume their positions without doing so. Symbolically, it marks the peaceful transfer of power from the current president to the next. Inauguration Day will be all the more important this year, as Mr. Biden ascends to the presidency at a time when political division has threatened the nation’s democratic institutions and his predecessor has gone to extreme lengths to stay in power.

Mr. Brooks declined to say what he will be singing at the inauguration, but said he would most likely not repeat his rendition of “We Shall Be Free,” which he sang at President Barack Obama’s inauguration 12 years ago.

“There are plenty of songs of love and unity that you can choose from, from the greatest writers, you know around the world,” he said. “Because we’re all humans. We live within the border of the United States, but the truth is, the message that goes out goes out to all of us around the world.”

Mr. Biden spent about 45 minutes on Monday morning volunteering at a Philadelphia food bank to mark the national day of service and Martin Luther King’s Birthday.

The president-elect worked a conveyor belt assembling food boxes at Philabundance, an organization founded in 1984 that distributes food to pantries and emergency shelters across nine counties in Pennsylvania, according to Mr. Biden’s transition team.

Wearing a black face mask, a Philabundance baseball cap and his trademark aviator sunglasses, Mr. Biden placed canned goods, two at a time, into each food box. And Jill Biden, who will become the first lady on Wednesday, added packages of rice to the boxes while disco music played over loudspeakers.

Mr. Biden’s decision to volunteer at the food bank on Monday was consistent with many of his predecessors in both parties who frequently engaged in a public service event on the holiday. Mr. Trump largely ignored the service component of the holiday. In 2018, he drew criticism for going to play golf instead.

Mr. Trump’s public schedule for Monday indicated, as it has on most days for the last several weeks, that he planned to “work from early in the morning until late in the evening” and “make many calls and have many meetings.”

Rishi Sunak’s mini-budget will be the most leftwing in years. Can Labour capitalise? | Larry Elliott

Biden’s aides were furious that Cuomo made a self-serving video for the 2020 DNC, new book says

BREAKING NEWS: Covid-19 test centre is hit by explosion in Dutch town that has seen surge in cases