Dozens of bank robbers armed with assault rifles invaded a city in southern Brazil and left cash strewn across the streets to aid their getaway as residents rushed to pick up the money.

The attackers took control of the streets of Criciúma, in the state of Santa Catarina, overnight as they launched an assault against a local bank branch.

Shots rang out across the city and at least two people were shot – including a police officer, according to police. 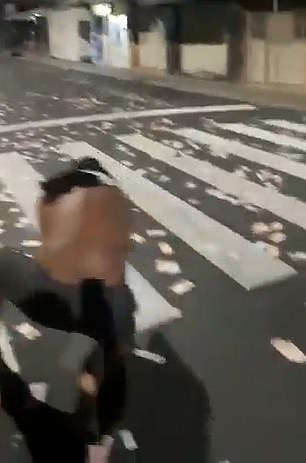 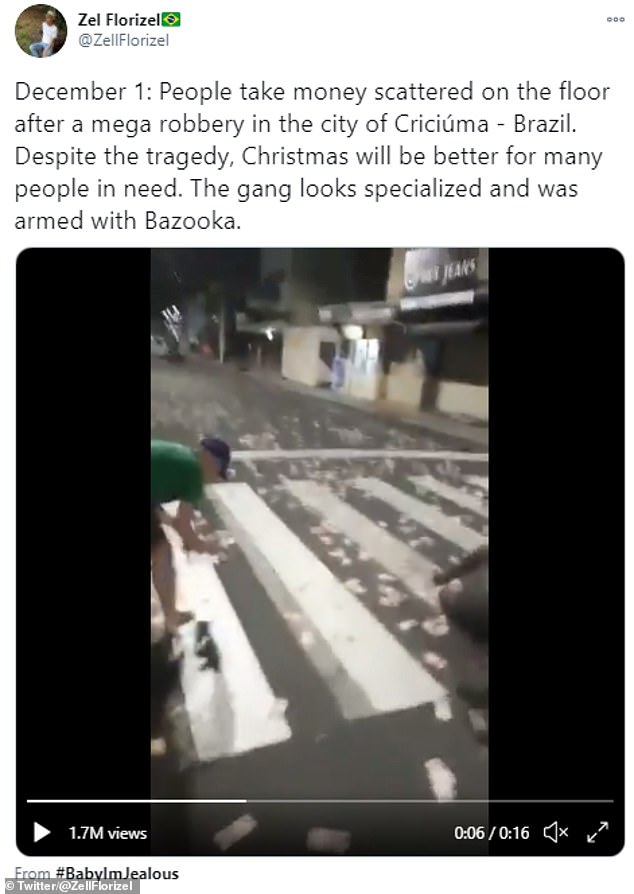 Zel Florizel, a Brazilian singer and songwriter posting footage on Twitter showing local residents rushing to pick up the money

There were about 30 criminals in roughly ten cars, and they blocked access points to the city to prevent police reinforcements from responding quickly, according to the Globo television network.

The takeover began around midnight and lasted roughly two hours. Images on Globo showed a bank vault with a square-shaped hole in it and a convoy of criminals’ vehicles as they made their escape.

Cash was scattered across the ground in one area of the city. Zel Florizel, a Brazilian singer and songwriter posting footage on Twitter showing local residents rushing to pick up the money.

He tweeted: ‘People taking money scattered on the floor after a mega robbery in the city of Criciúma, Brazil. Despite the tragedy, Christmas will be better for many people in need. The gang looks specialized and was armed with Bazooka.’ 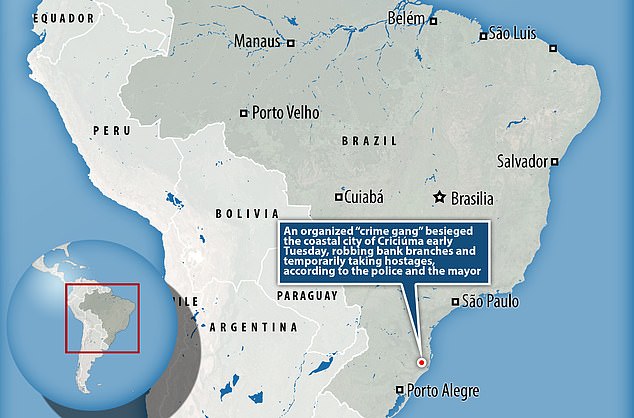 The criminals took control of the streets of Criciúma, in the state of Santa Catarina, overnight as they launched an assault against a local bank branch

Mayor Clesio Salvaro took to Twitter while the terror was still unfolding to warn locals of the ‘robbery of great proportions, by very well-prepared thieves’.

‘As mayor of Criciuma, I ask that you stay home, don’t leave home, exercise all precaution,’ Mr Salvaro said in a video he posted just before 2 a.m. local time. ‘Tell your friends and families. Let the police do their job.’

Alongside the video, he posted: ‘Criciúma is the target of a major assault. Together with the military authorities and security forces, we continue to monitor and follow the facts. Stay at home.’

Local residents described the unfolding carnage as being like a ‘movie scene’ and claimed the armed robbers had bombs.

‘My God. The entire city of Criciúma is being attacked. The guys have Bazookas, Bombs and set fire to PM bases,’ said Levi Kaique Ferreira. ‘It looks like a movie scene, scary.’ 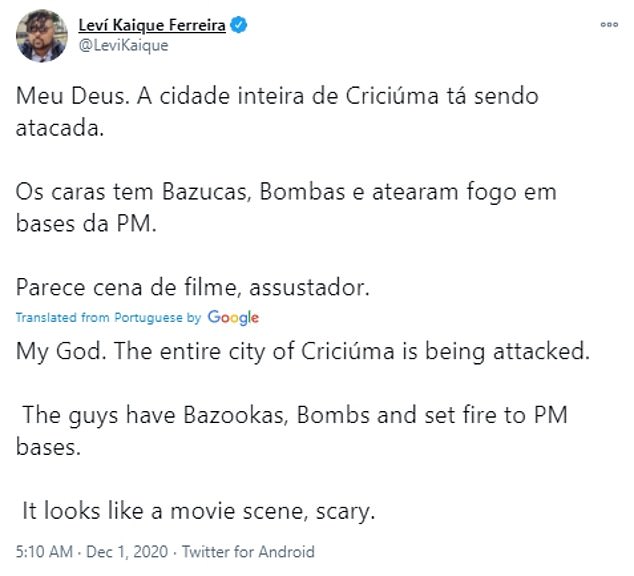 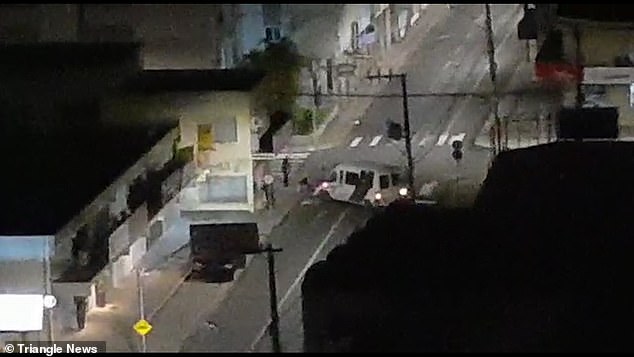 Video footage shows the bank robbers park a white vehicle as two wait outside during the siege.

Three or four sites had been looted by the armed robbers, Mr Salvaro told Radio Gaúcha.

‘I have no idea where they are from, but they are specialised,’ he said. ‘We have never experienced this in the history of the city.’

He added that at least six people had been taken hostage, but they were later released.

‘I talked to them. They are well. The information we have is that everyone was released,’ Mr Salvaro told GloboNews. 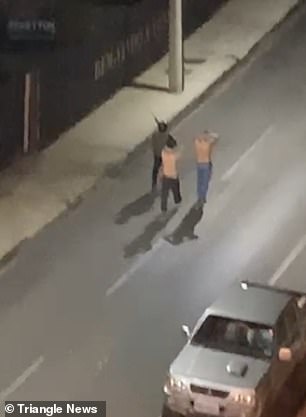 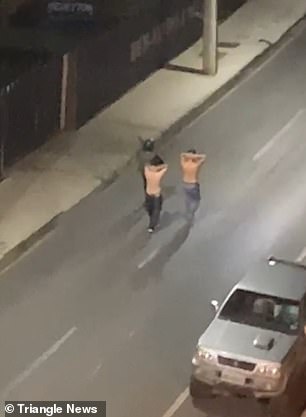 Two bare-chested men have their hands behind their heads as they are marched down the road by an armed robber, reports said

The mayor said that the city’s protocol with armed gangs is to not shoot back at the attackers in order to protect the public.

Cristian Dimitri Andrade, a Military Police commander in Criciúma, said the attackers were ‘several men with rifles, long weapons’, describing them as ‘an organised crime gang, which specialises in bank robbery’.

‘We are receiving information from residents who send us photos and videos,’ he told Engeplus, a local news outlet.

Mr Salvaro did not say how much money had been taken during the robbery, but said the police are investigating and they aim to retrieve the money.

Four people believed to be involved in the armed robbery have been arrested, and the police have recovered some of the money stolen, according to local media.

The city of Criciúma has a population of about 220,000. Local media have described the raid as part of a phenomenon they call ‘New Cangaço’, which is a term used to describe the robberies that plagued Brazil in the 1920s and 1930s.

In 2017, the Brazilian police found a tunnel fitted with electrical lighting and ventilation, thwarting a planned robbery of a São Paulo bank. Sixteen suspects were arrested.

In 2019, there were 21 bank robberies in the state of São Paulo alone, according to official figures. In the first half of 2020, there had already been 14.

The ‘Sweet’ Character That Got Cut From Pixar’s Soul