A newlywed couple held an impromptu photo shoot for their special day after becoming stranded at the side of a road for hours when a truck rolled.

The couple were travelling on Megalong Road near the Blue Mountains, west of Sydney, when a truck’s brakes failed, causing it to roll across the rural road at about 12.30pm on Friday last week.

As emergency crews cleared the debris that was left strewn across the road, a kind highway patrol officer stepped up to act as photographer for the couple. 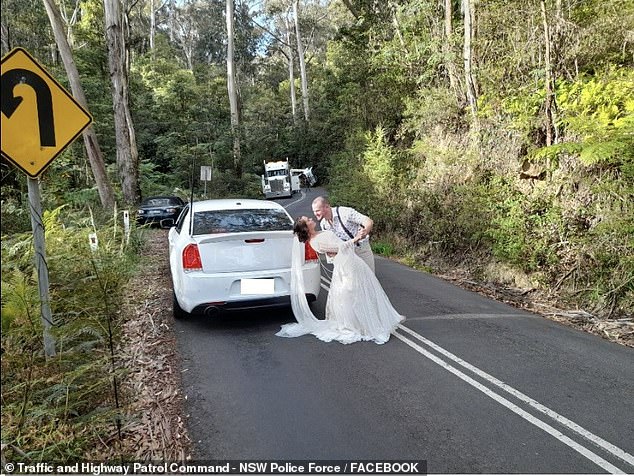 The bride and groom posed in front of the white highway patrol car as the road was cleared.

NSW Police posted the picture on Facebook, with the caption: ‘A wedding party waiting at the roll over was delayed during the recovery process, the Highway Patrol Sergeant at the scene thought to make the best of the incident and helped them take a special memory.

‘Luckily the highway patrol vehicle was the perfect colour for the occasion.’

Social media users were impressed by the stunning image, with many commenting how nice it was for the officer to help the couple out.

‘Making lemonade from lemons right there,’ one person wrote.

‘Awesome to see something cool come out of a crappy year,’ another wrote.

‘Well done to the officer for helping make a memory for the couple,’ wrote another.

Another wrote: ‘And probably the first time someone is so happy to be photographed by a police, particularly a traffic police.’

Social media users were impressed by the stunning image, with many commenting how nice it was for the officer to help the couple out

ALISON BOSHOFF:I’m a Celebrity… get me my thermals!

Covid in Scotland: Business owners ‘in tears’ over cafe status