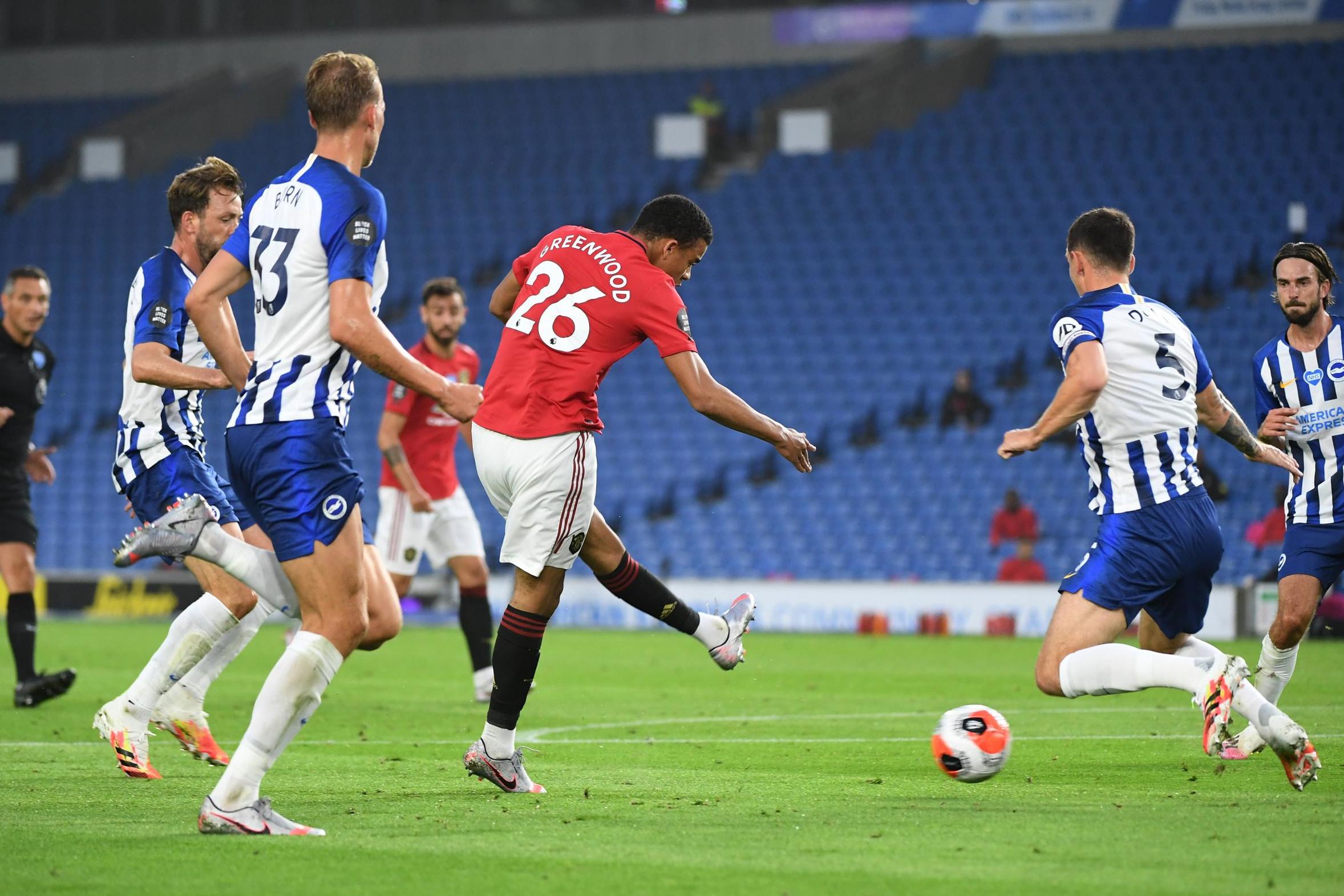 Victory for Ole Gunnar Solskjaer’s side tonight will them leapfrog Wolves into fifth place in the Premier League table.

With rivals Man City facing a suspension from European, finishing fifth could guarantee United a place in next season’s Champions League.

With kick-off at 8:15pm BST, James Robson will bring you all the action and analysis tonight.

That’s another really well worked team goal. In the end it was Pogba who laid off to Fernandes, whose effort takes a deflection on the way in.

28mins: Pogba has been really bright so far. He’s constantly getting on the ball and looking for ways to break Brighton down.

He’s also putting in a shift, winning it back. He looks re-energised.

22mins: Neville says Greenwood reminds him so much of Robin van Persie. He certainly has the same devastating finishing ability – but it’s his ability to carry the ball at pace and shift onto either foot that defenders find so terrifying. In that sense, he’s like Ronaldo.

What a terrific goal from the teenager. He bursts into the box, then it’s a double step over before firing low into the bottom corner. Dunk was mesmerised by his feet.

13mins: Rashford then goes down in the box under a challenge from Burn – but no penalty.

12mins: CHANCE! Bruno Fernandes hits the post from 20 yards after Pogba’s set up. Pogba then sees his rebound deflected over.

10mins: Gary Neville says United might have to pay “a little bit more than that” when discussing reports of a £50million move for Jadon Sancho.

He also says the Borussia Dortmund winger has blazed a trail for other emerging talent who refuse to be “hoarded” by clubs – Angel Gomes being one such example.

4mins: A dangerous looking cross from Fernandes seems destined to find Martial in the six-yard box – but Duffy clears.

1min: Right from the start we can see that understanding between Martial and Rashford with some nice link up play.
It was fascinating to hear Solskjaer trying to keep them on their toes though beforehand.

He insists he will continue to look for a to class striker to provide competition for places.

KICK OFF! We’re under way.

The teams are out at the Amex!

So, Solskjaer reverts to a strong starting XI – and by the looks of it, he is going to try and take the game to Brighton in the same manner by which the Red Devils brushed aside Sheffield United 3-0.

The United squad has arrived at the Amex, and we’re expected confirmed lineups in just under 20 minutes…

Solskjaer has no fresh injury concerns. The Norwegian made eight changes for Saturday’s FA Cup quarter-final win at Norwich and looks set to make a similar number of alterations after the match went to extra-time.

Axel Tuanzebe and Phil Jones remain absent for United, who will surely not call upon Angel Gomes after Solskjaer said the teenage midfielder looks set to leave when his contract expires on Tuesday.

How to watch Brighton vs Manchester United

TV channel: The match will be shown live on Sky Sports’ Premier League and Main Event channels, and is available via Now TV with a day pass for £9.99, or a three-month pass on offer for £25.

Live stream: Sky Sports subscribers can stream the match online via SkyGo and the SkyGo app, with a mobile month pass available for £5.99.

Brighton have picked up two excellent results since the restart to boost their survival hopes, beating Arsenal at home before securing a point at Leicester.

United will have to be wary, particularly given the manner in which the Seagulls fought back from behind to beat the Gunners – but Solskjaer will be confident of a win if his side take the game to their opponents as they did to Sheffield United.

The two sides have met five times in the Premier League, with United winning three times and Brighton twice.

The Red Devils beat the Seagulls 3-1 at Old Trafford earlier this season, but the teams’ last meeting at the Amex – back in August 2018 – ended 3-2 to Brighton.

Seven arrested after racist abuse of black family in Oregon