A burn survivor has accused TikTok of ‘ableism’ after more than a dozen of her videos featuring the scars that cover 95 per cent of her body were taken down for ‘violating community guidelines.’

Kyazsha Davis, 24, who is known as @kyauchiha on the platform, has amassed nearly 350,000 followers thanks to her body-positive clips, but she has grown increasingly frustrated with the constant removal of her posts.

‘TikTok is ableist as f**k,’ the Florida resident captioned a video of herself scrolling through the notifications of her violations last month. 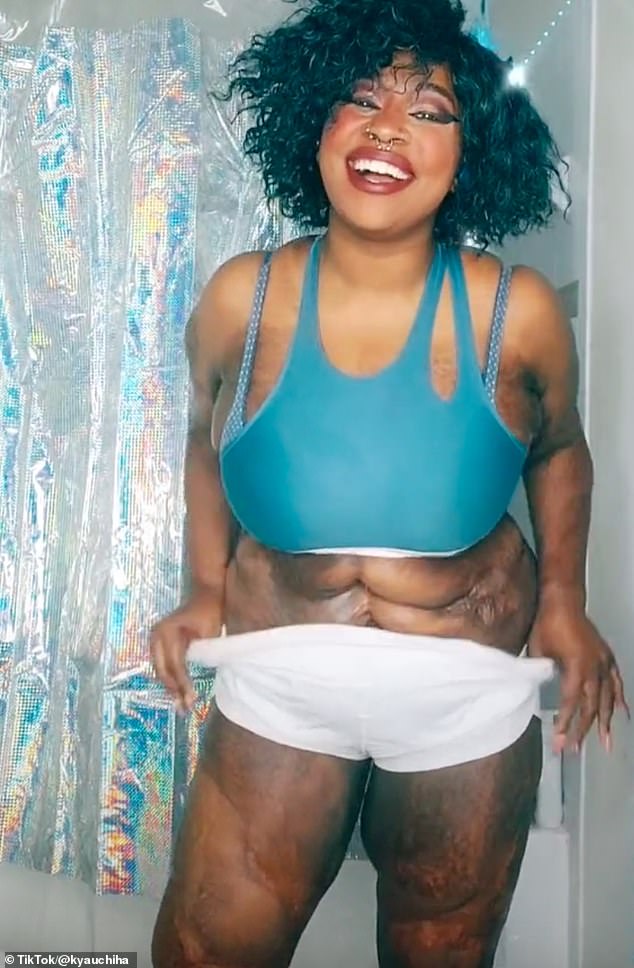 Role model: Kyazsha Davis, who is known as @kyauchiha account on TikTok, has amassed nearly 350,000 followers thanks to her body-positive videos featuring her burn scars

Call out: Kyazsha has accused TikTok of ‘ableism’ after having over a dozen of her videos removed for ‘violating community guidelines’

‘This is my only big platform,’ she continued. ‘I really wanna keep making content but they take down [the] majority of my videos bc of my skin. I have so many violations I’m scared I’m going to get banned.’

The video in question shows Kyazsha reacting to Aleema flipping her hair after putting makeup on. Both of them were fully clothed and filmed from the chest up.

In the caption, she said ‘it’s heartbreaking’ to see TikTok censoring other burn survivors like herself.

Just a few days before Christmas, Kyazsha alleged that TikTok had removed 11 of her videos in the past week, once again sharing footage of herself scrolling through her notifications.

‘At this point, I’m trying not to cry. Like, I literally cannot take it on this f**king app. This is why I need a break,’ she said.

‘This s exactly why I’m going to look for a f**king lawyer. This s**t is so f**king appalling,’ she added, noting that other TikTokers wear thongs and two-piece swimsuits in their clips, but when she does it, it gets taken down.

‘I think you can sue them for discrimination,’ one person commented, while others started calling out the platform in her defense. 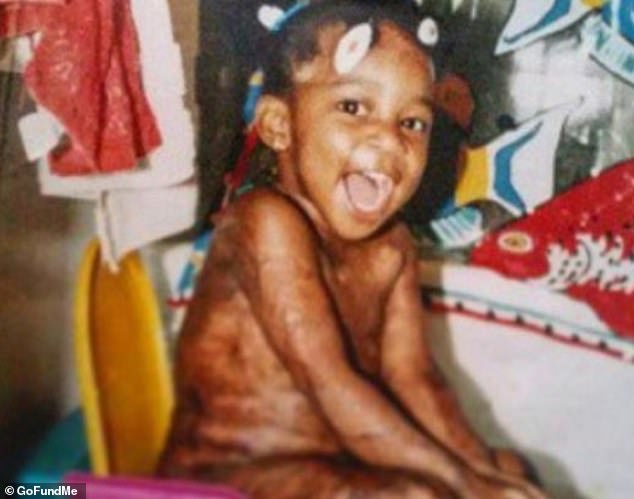 Life-changing moment: The Florida resident was in a gas heater explosion when she was 13 months old and 95 per cent of her body was covered in third and fourth-degree burns 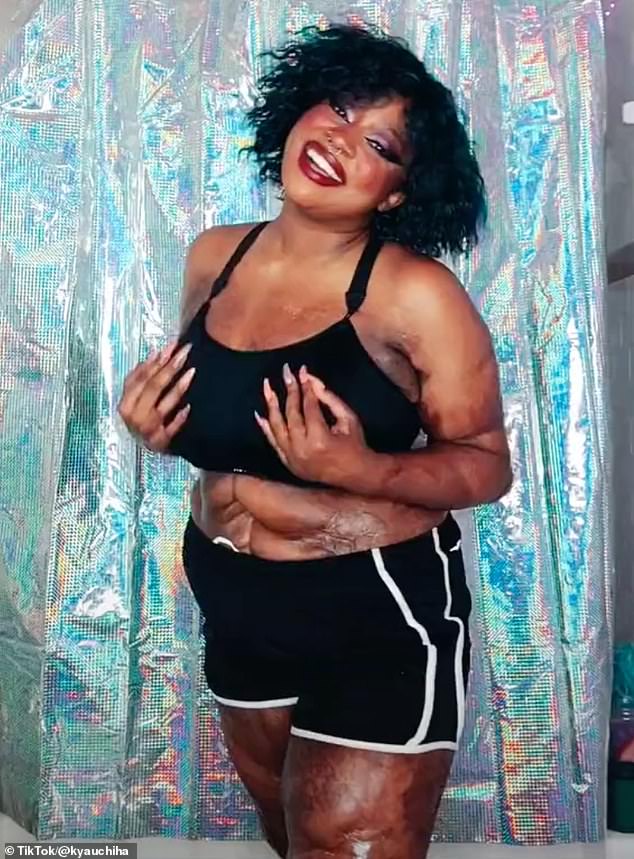 Body positive: Many of her videos show her playfully dancing while showing off her scars 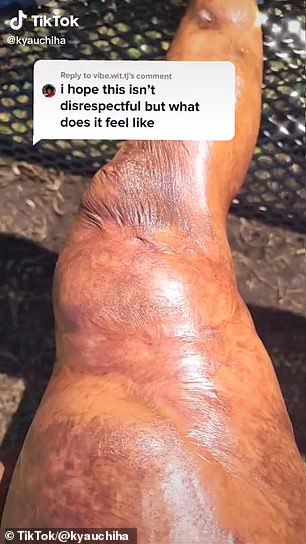 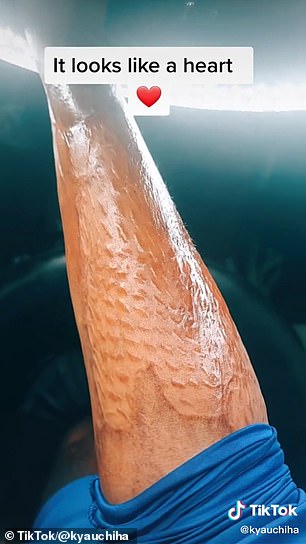 ‘@tiktok are you ever going to address this? Why do you keep removing these videos,’ one user wrote.

‘@tiktok enjoy the lawsuit from her and her lawyer,’ another added.

Many of Kyazsha’s videos show her playfully dancing while hitting back at online trolls who claim she should hide the burn scars she has had nearly her entire life.

She was in a gas heater explosion when she was 13 months old and 95 per cent of her body was covered in third and fourth-degree burns.

‘Ever since my life has been changed permanently, mentally and physically,’ she wrote on her GoFundMe page, where she is trying to raise $10,000 for skin graft surgery. 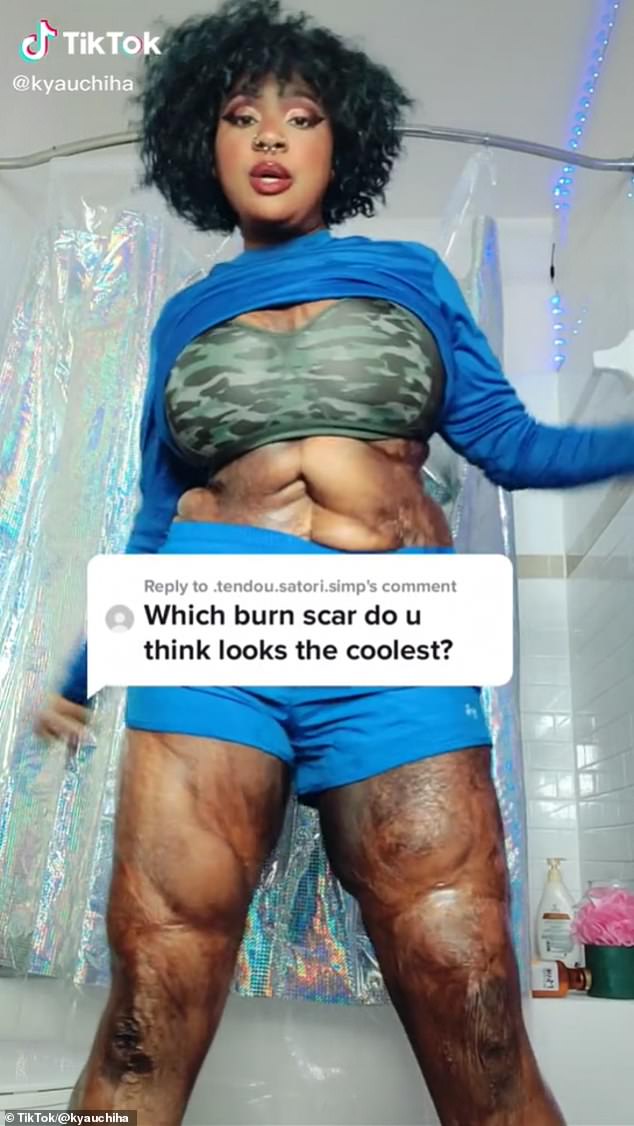 Hard to handle: Kyazsha said she’s had over 32 procedures, including open heart surgery and skin grafts, but she still lacks flexibility and elasticity in certain areas on her body 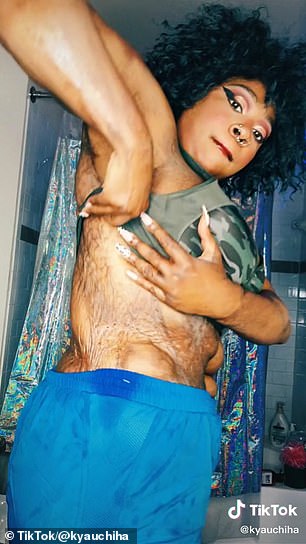 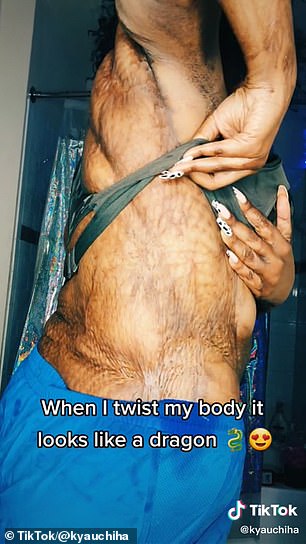 Last resort? Kyazsha has threatened to get a lawyer to take legal action against TikTok, prompting some commenters to encourage her to sue the app for ‘discrimination’ 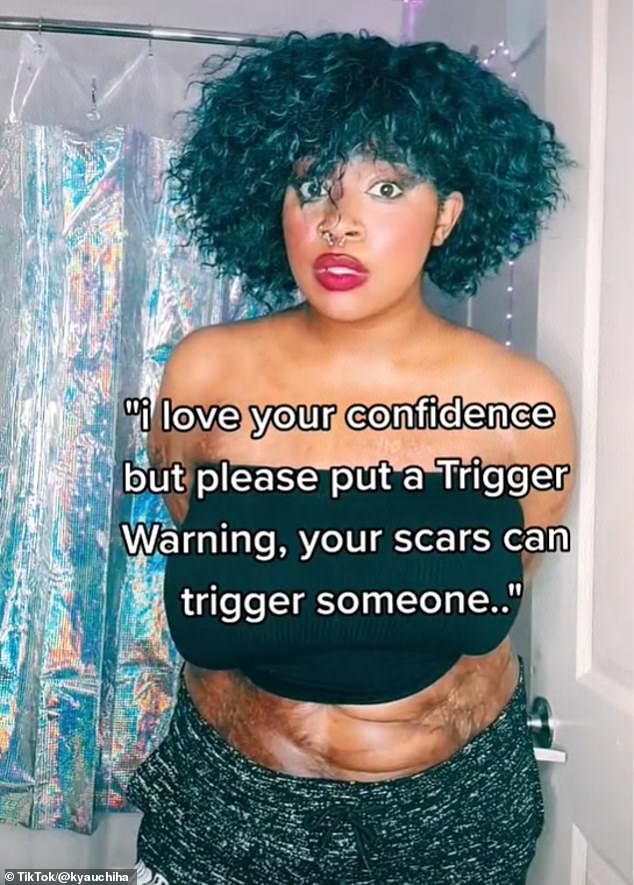 No way: In many of her videos, she hits back at commenters who claim she should hid the scars she has had nearly her entire life

Kyazsha said she’s had over 32 procedures, including open heart surgery and skin grafts, but she still lacks flexibility and elasticity in certain areas on her body, which restricts her from a number of activities and makes her feel insecure.

‘I am diagnosed with depression and severe anxiety and it’s just really hard to keep up with my medical bills and [mental] stability going through life like this along with trying to afford college,’ she added.

‘I just want to feel beautiful and not be in pain with this anymore.’

In a statement made to DailyMail.com, a spokesperson for TikTok explained that several of Kyazsha’s videos have been ‘restored’ after being reviewed by the app’s moderators.

‘Content that depicts scars and burn wounds is allowed on the platform and [the videos have] been restored,’ the spokesperson said.

‘Our community’s feedback is important to us and if someone thinks we’ve removed content by mistake, we invite them to submit an appeal.’