CDC projects another 92,000 Americans will die from COVID-19 in the next THREE weeks

With COVID-19 fatalities rising as high as 4,000 in a day, CDC scientists predict the death toll could increase by nearly 25 percent – more than 92,000 – in the next three weeks.

By the end of the week ending in February 6, the agency estimates the US death toll could rise as high as 477,000 total COVID-19 fatalities.

As of Thursday, the US death toll stands at 384,784. The CDC projects deaths rising by 16,000 to 29,600 deaths in the coming weeks,but its estimate for how high the total death toll could climb suggests a much deadlier January.

Wednesday arguably saw the third day in a row that daily deaths surpassed 4,000 in the US, according to data from the COVID Tracking Project. Johns Hopkins data puts that figure just slightly lower, at 3,848.

Daily deaths had never hit 4,000 before this month – not even in the spring, when New York City became the global epicenter of the pandemic.

The US recorded 4,327 fatalities on Tuesday – which was the deadliest day of the pandemic thus far.

And fatalities are on track to rise even higher, with daily fatalities rising in 33 states and up by more than 10 percent in more than 25 states.

Post-holiday case surges and ‘super-covid’ variants are on track to push the death toll even higher. Another 232,943 new infections were reported in the US on Tuesday. Daily new cases have stayed above 200,000 all but two days of this month.

‘Things are as bad now as they have ever been,’ Louisiana assistant state health officer Dr Joe Kanter told 4WWL.

‘We do anticipate they’re going to get worse.’

Highly-infectious new variants are threatening to drive case rates up exponentially. At least 88 people in 12 states have contracted the more infectious variant first found in the UK. The family of a Texas woman who died of COVID-19 says that she had the UK variant, making hers the fist US fatality from B117.

At least two homegrown variants that appear more infectious were identified in Ohio. Yet another homegrown variant of coronavirus may be more contagious and may already be dominant in the US, Illinois scientists revealed Thursday.

Vaccines will likely still work against any of the growing number of new variants, scientists believe – but the rollout of those shots is going painstakingly slow in the US, where just 10.8 million Americans have received their first doses since the first jab was given on December 14. 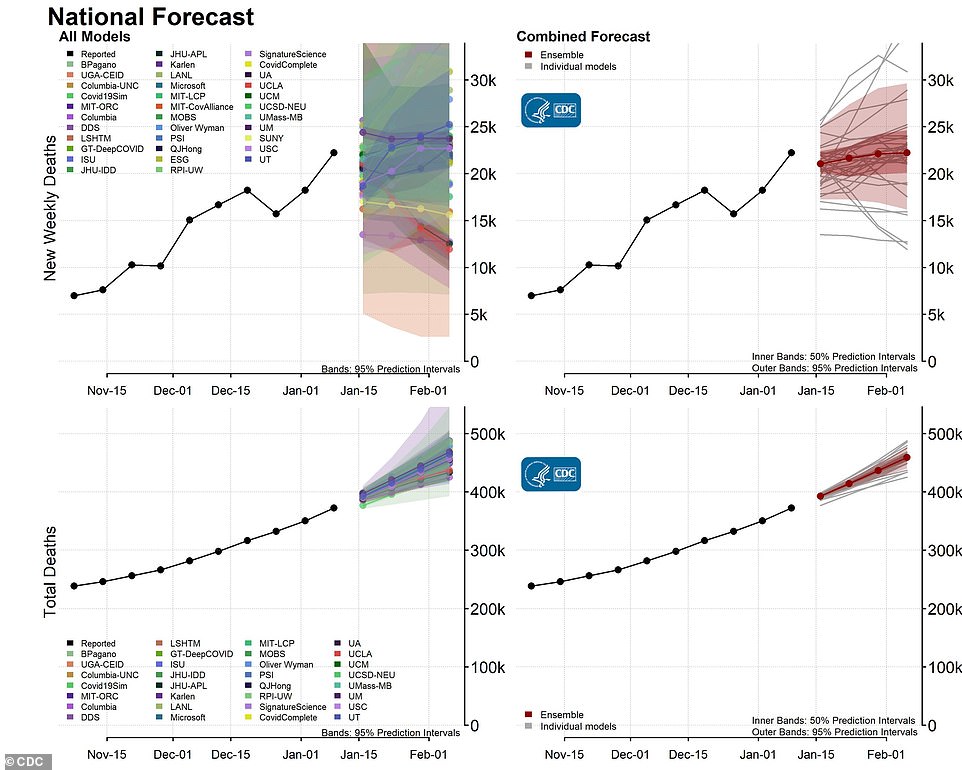 CDC’s aggregated prediction models estimate that the US COVID-19 death toll could rise as high as 477,000 by February 6 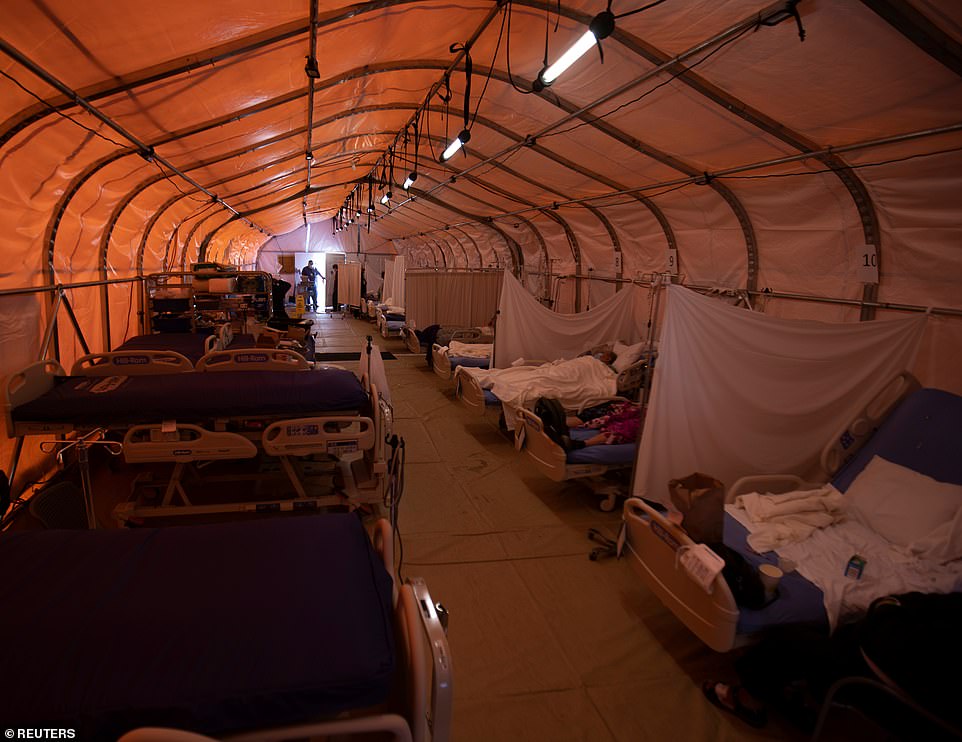 California has once again become one of the hardest hit parts of the country, resorting to tents and field hospitals to hold the overflow of COVID-19 patients (pictured) 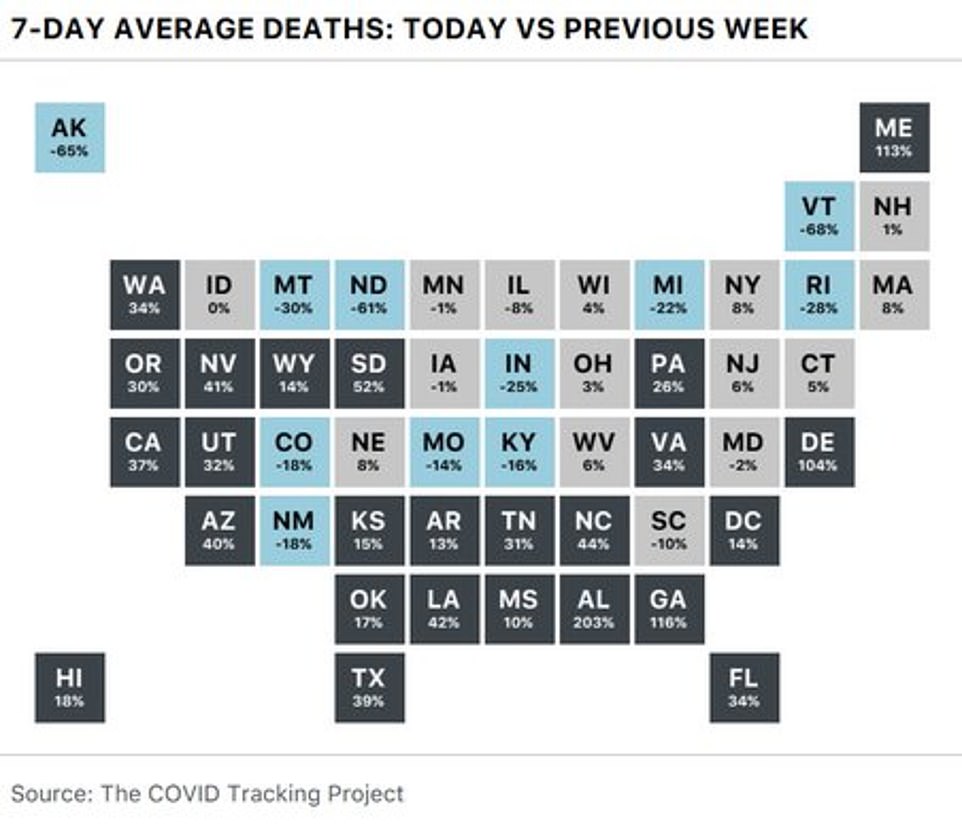 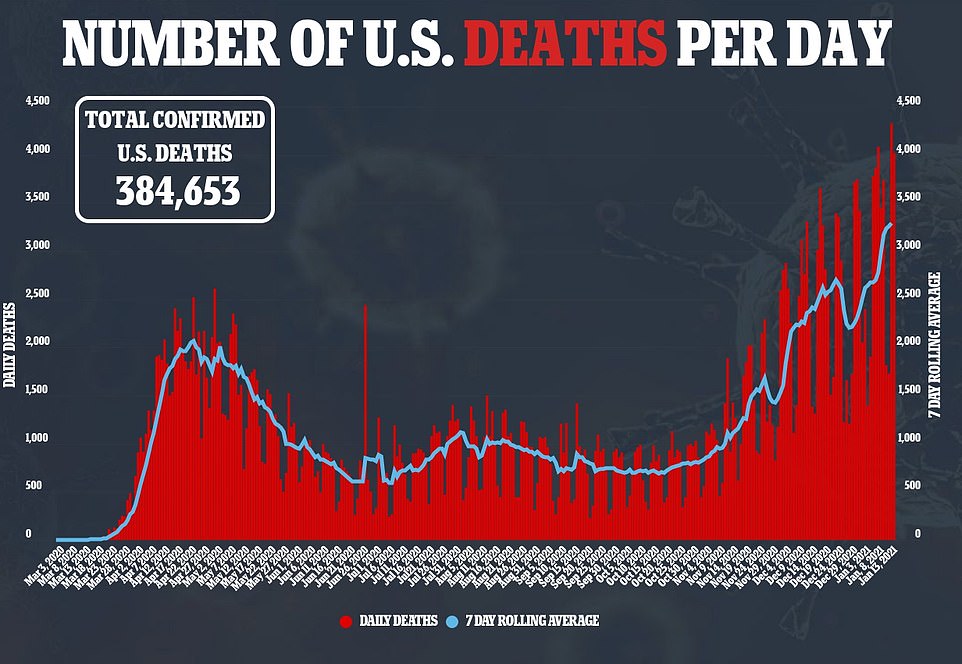 Wednesday saw nearly 4,000 more COVID-19 deaths. The US has already passed that grim benchmark for daily fatalities twice in January 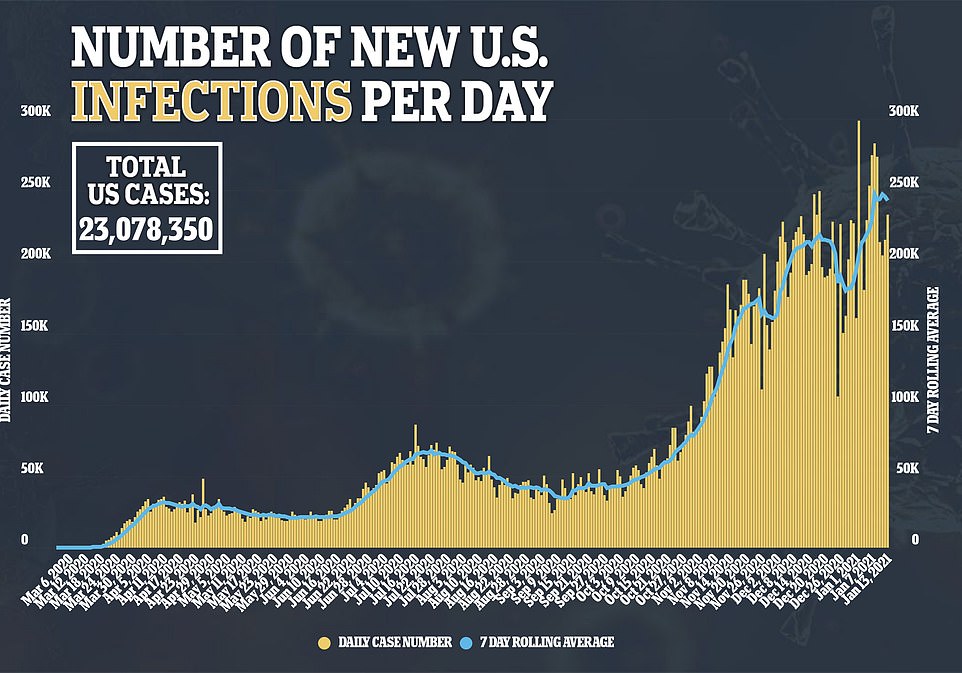 Nearly 1.7 million coronavirus cases have been diagnosed in the US in the past week, including more than 232,000 Wednesday

The US now has its own homegrown ‘super-covid’ variants that are more infectious than the most common coronavirus types in the US – and the new variants are spreading like wildfire in at least one state, Ohio scientists revealed Wednesday.

This unique US variant has three mutations not seen in the others from the UK, Brazil and South Africa.

It does have a spike protein mutation, and is thought to be more infectious than normal coronavirus.

There is no evidence that either of the new variants will be immune to vaccines so far.

Scientists warn the emergency of these two variants could signal that the virus is mutating in similar ways  -but totally independently – in many locations across the world.

‘It’s definitely home-grown and widespread, and we’re the first to characterize it.’

The variant, dubbed 20C-US, was first seen in Texas in May. Viruses are constantly evolving and mutating. Most anomalous mutants crop up and die out, and are no cause for concern.

Dr Gagnon says that’s not the case with 20C-US.

‘We predict that 20C-US may already be the most dominant variant of SARS-CoV-2 in the US,’ he said in a Thursday press release.

‘There are hundreds of variants floating around, so for this one to rise to prominence suggests it might be more transmissible.’

Dr Deborah Birx suggested last week that the surge in US cases suggests a 50 percent more transmissible, homegrown coronavirus variant could already be fueling the spread.

In the past week alone, nearly 1.7 million new infections were recorded in the US. The 7-day rolling average for cases was nearly 15 percent higher last week than it was a month prior.

Dr Birx warned that the trajectory of case increases seen in many US states looked alarmingly similar to the trends seen in the UK when its B117 variant was becoming dominant.

CDC officials were quick to say in a statement that such a variant hadn’t been discovered and that Birx’s comments were pure speculation.

But research from Ohio and Illinois suggest otherwise.

Dr Dan Jones, who was among the scientists to discover the so-called ‘Columbus variant’ said similarities between the variant his lab found and the one reported by Southern Illinois University suggest they’re not identical but may be part of the same ‘outgrowth’ – perhaps a Midwestern variant?

In fall, the Midwest indeed became the hardest hit region of the US.

But now, states on the coasts and the Sun Belt seem to be back in the eye of the COVID-19 storm.

California is utterly overwhelmed, with more than 22,000 patients hospitalized for COVID-19. Los Angeles is resorting to field hospitals to hold overflow patients.

On the East Coast, coronavirus cases are surging in Connecticut and Rhode Island, which saw 3,529 and 1,092 new cases yesterday, respectively.

Louisiana’s daily cases fell slightly this week, with just shy of 2,900 added yesterday. But its hospitalizations remain high at more than 2,000 and 51 new deaths were reported on Wednesday.

In Georgia, daily fatalities in the past week have climbed by a whopping 116 percent, while deaths in Alabama have risen by 203 percent, according to COVID Tracking Project. 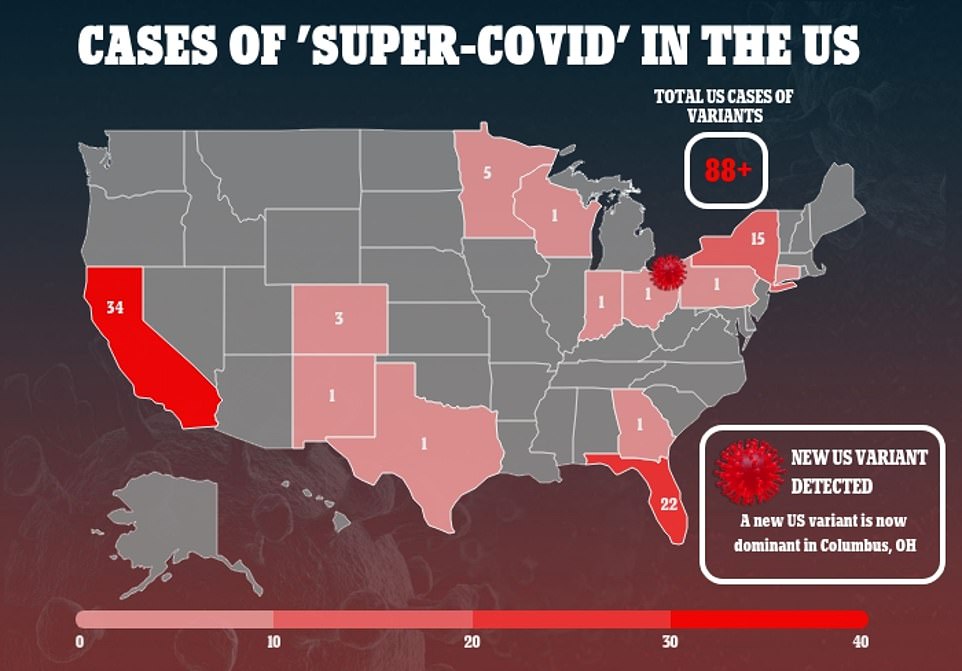 At least 88 people have the UK’s more infectious ‘super-covid’ variant in the US. One variant nearly identical to it, but homegrown, was discovered in Ohio, as was a second completely unique US variant (red spiky ball)

Disturbingly, separate data reveals that Alabama is the state with the lowest proportion of people who have had their first dose of the COVID-19 vaccine.The Yellowhammer state has administered doses to just less than 1.8 percent of its population.

The state is not in short supply of the vaccine either. It’s administered less than a quarter of the doses it currently has on hand.

In contrast, West Virginia is leading the way in the vaccination roll-out. The state has vaccinated nearly seven percent of its population.

In terms of raw numbers, Texas has administered the most doses of the COVID-19 vaccine, with 978,042 shots given.

However, given they have a larger population than many other states, the Lone Star state is still lagging when it comes to the overall percentage of residents who have received the jab.

As of Wednesday, more than 10 million Americans have now been administered with their first dose of the vaccine. 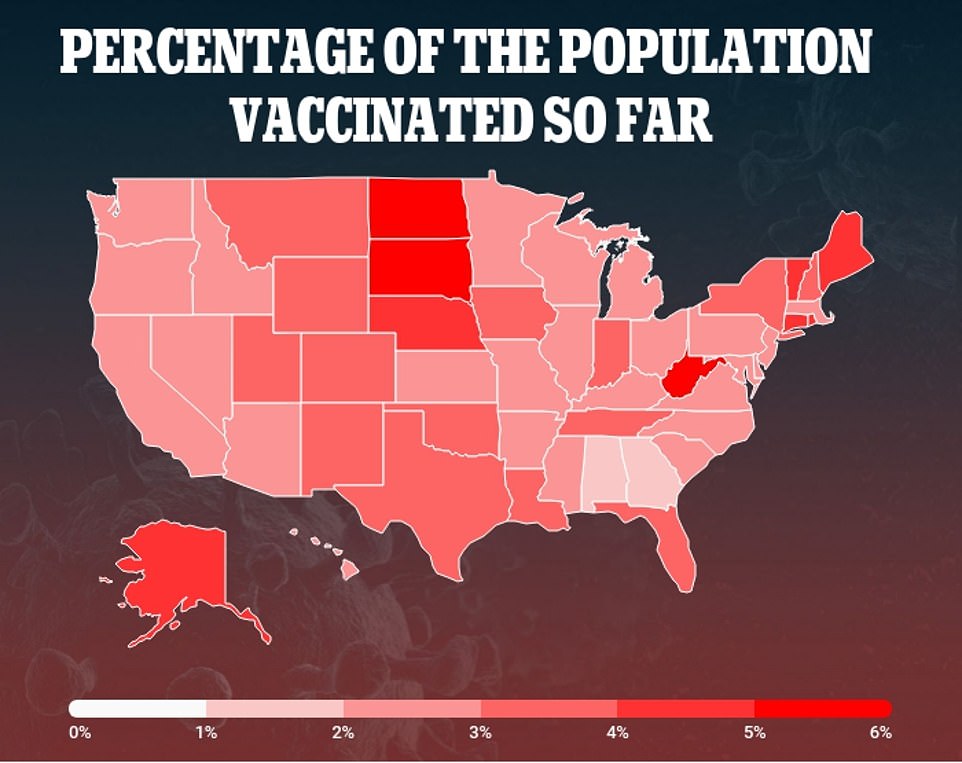 This map shows just how slowly the COVID-19 vaccination roll-out is going. Most states have administered doses to less than four percent of people 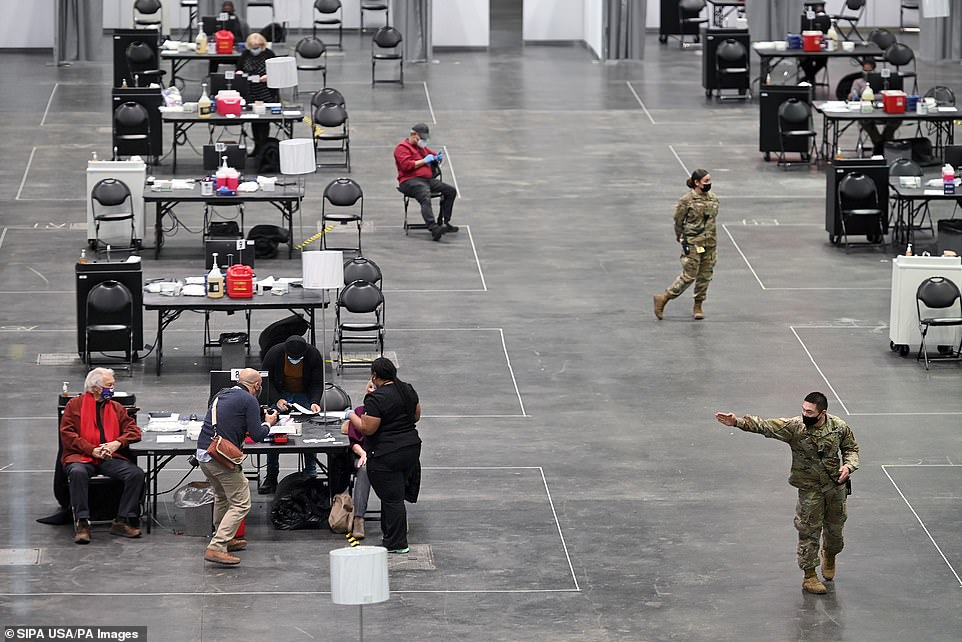 Big states such as California and New York are trying to accelerate their roll-outs by opening giant vaccination centers. Pictured: The Javits Center in NYC, which has been transformed into a large-scale vaccination site 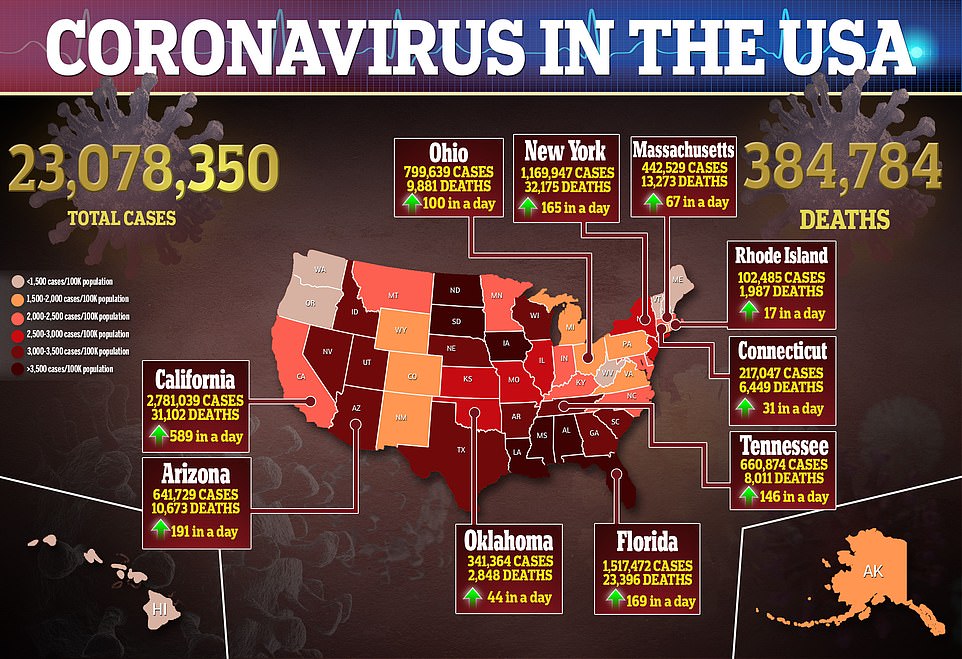 Big states such as California and New York are trying to accelerate their roll-outs by opening giant vaccination centers.

In the Golden State, a huge makeshift center has opened up in the parking lot of Disneyland in Orange County, while New York City has turned its Javits Center Field Hospital into a large-scale site to administer the shots.

Not only does the number of daily deaths remain high, but cases and hospitalizations are also surging.

On Wednesday, another 219,090 cases of COVID-19 were reported across the country. Now more than 23 million Americans have now contracted the contagious virus. 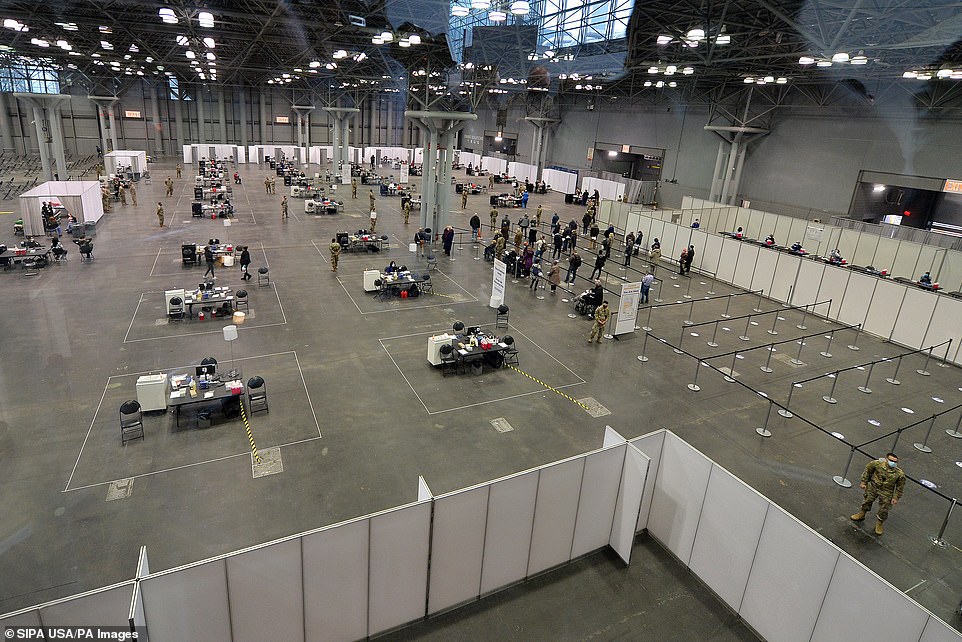 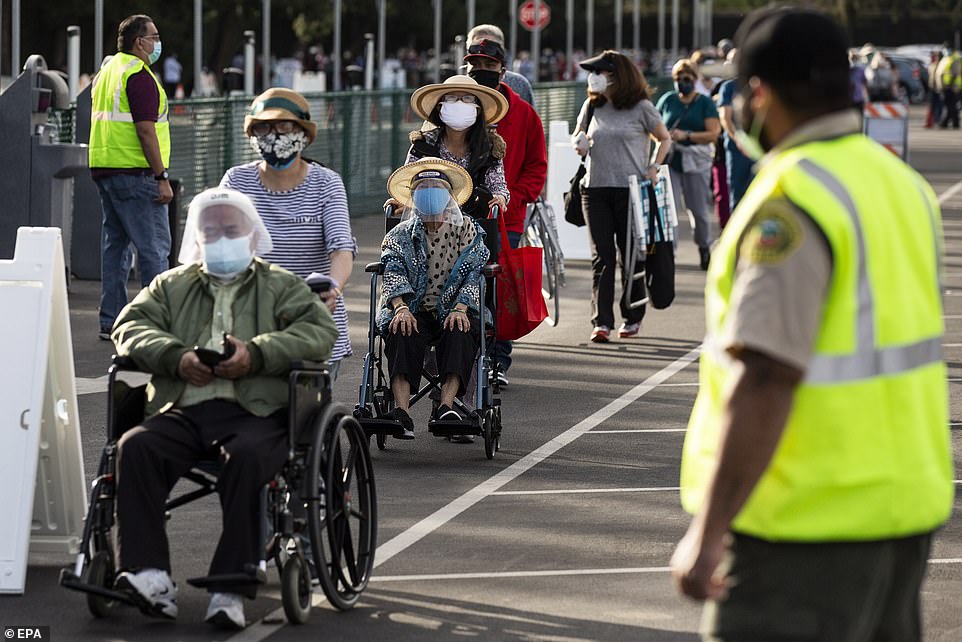 Residents are seen lining up for their COVID-19 vaccine at a makeshift vaccination center in the parking lot of Disneyland in Anaheim, California

Tributes flow for mother, Leonie Jackson, who died while trying to save her son in Congo Beach, NSW