Chelsea Clinton has been ridiculed on Twitter after she revealed a highly observant comment made by her four-year-old son about Joe Biden‘s inauguration.

Clinton, the only child of Bill and Hillary Clinton, said she told her son Aidan that ‘it’s the 21st day of the 21st year in the 21st century’. 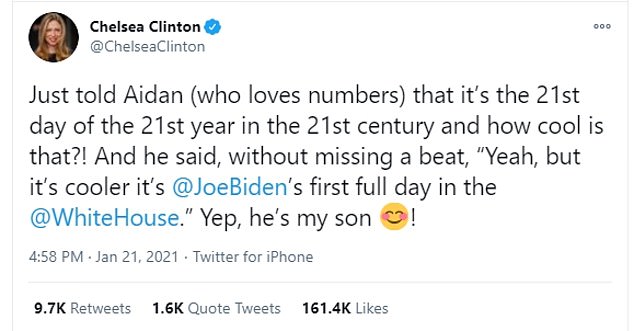 Chelsea Clinton said she told her son Aidan that ‘it’s the 21st day of the 21st year in the 21st century’. Her son then quipped: ‘Yeah, but it’s cooler it’s Joe Biden’s first full day in the White House’ 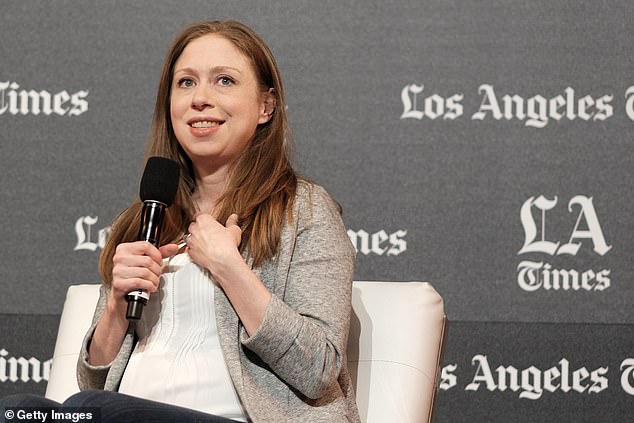 Clinton is the only child of Bill and Hillary Clinton. Above, Chelsea is pictured in a 2019 file image

Another Twitter user wrote: ‘Yes I too woke up today and said good morning to my 1 year old son and he said “yes father it is a good morning, as the sun rises and brings us a new day filled with hope and promise. As we move toward spring and the rebirth of plants giving us a new lease on life.”‘

One person joked: ‘So sweet! I just told my 2 year old daughter about Aidan and she just stared back at me and said: “Epstein didn’t kill himself!” And then we all clapped.’

‘Just told my 2 year old about this and she said “Yeah, that’s utter cods***.” Then, she went back to doing her Rubik’s Cube,’ another joked.

Others disputed whether the conversation between Clinton and her son ever took place.

‘I’m gonna go ahead and add this to “things that didn’t happen”,’ one person wrote.

Some people chose to praise Clinton on raising a ‘smart’ son. ‘What a very smart son! Yesterday, was just the best day for America!,’ one person said. 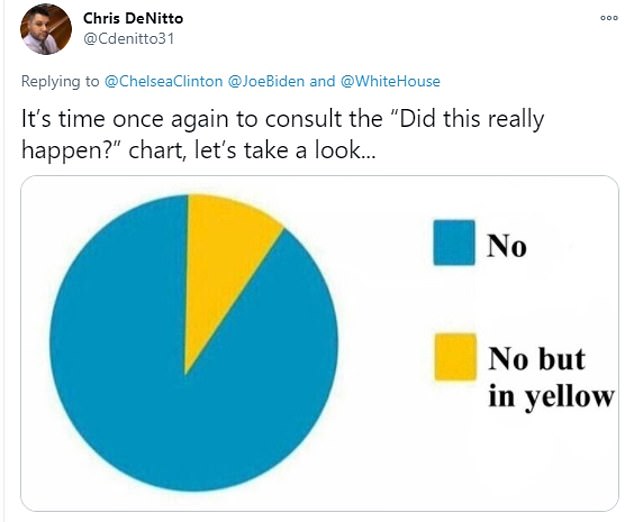 ‘It amazes me how children are so in tune with politics now in days!,’ another woman observed.

The Clinton’s were seated far back from Biden, in keeping with the regulations, and next to former Vice President Mike Pence.

The ceremony was different than in years past, with only a selected crowd of 1,000 people in attendance in line with social distancing rules amid the Covid-19 pandemic.

Trump, Biden both insist they will win

Australia’s economic growth surges by 3.1 per cent in the December quarter