Boris Johnson’s medical chief was so infuriated by a newspaper story which claimed that a single dose of the Pfizer vaccine might only be 33 per cent effective that he threatened to report it to a press watchdog, The Mail on Sunday understands.

Chief Medical Officer Chris Whitty – normally one of the more mild-mannered figures at No 10 press conferences – told colleagues The Guardian’s report was ‘total nonsense’ which could threaten the uptake of the jab.

The newspaper quoted ‘Israeli experts’ as saying only a third of people who have received one injection were protected.

No 10’s vaccine advisers say the real figure is 89 per cent, starting 14 days after the first jab. 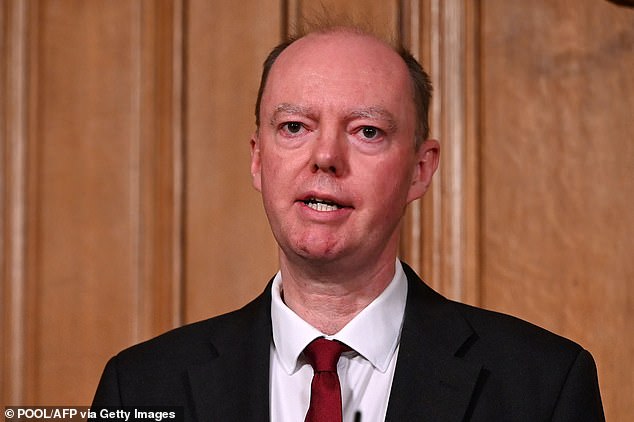 It was reported yesterday that a single shot of the Pfizer vaccine had led to a ‘major presence’ of antibodies in 91 per cent of doctors and nurses who received it in Israel within 21 days.

A source said: ‘It is not every day that a member of the liberal academic establishment is angered by The Guardian.’

No 10’s options were limited, however, because the newspaper has not signed up to the Independent Press Standards Organisation, which regulates newspapers and sanctions them for inaccuracies.

The report quoted Israeli Covid commissioner Professor Nachman Ash as saying that a single dose of Pfizer appeared ‘less effective than we had thought’, once cases of asymptomatic infection were included, although those who had received their second dose had a six- to 12-fold increase in antibodies.

Later in the week, the paper reported that Israel’s health ministry had ‘moved to row back on the comment’ by Professor Ash’s suggestion that single doses of the Pfizer Covid-19 vaccine had not given as much protection against the disease as had been hoped.

It quoted the Israeli Ministry of Health as saying that the ‘full protective impact of the vaccine’ had not yet been seen.

The Guardian said last night that it had reported both Professor Ash’s ‘initial comments’ and subsequent comments from Israel’s health ministry: ‘The Guardian’s independent readers’ editor has not received any complaints about either article.’

Fraud: Banks reveal the 10 coronavirus scams to be wary of