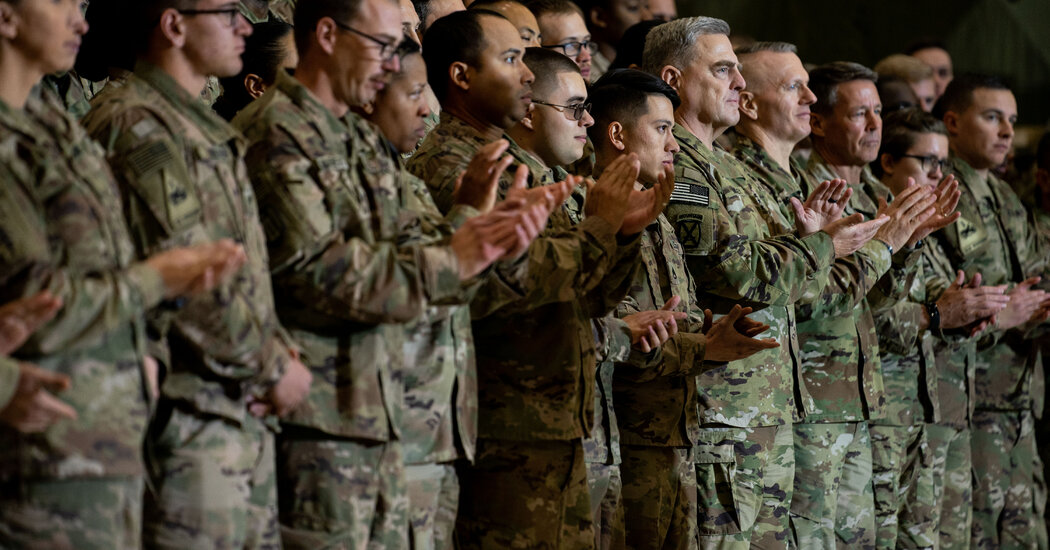 WASHINGTON — Leading Republicans and Democrats in Congress said on Wednesday that they would press ahead in advancing an annual military policy bill without adding a repeal demanded by President Trump of a legal shield for social media companies, defying his threat to veto the legislation over the unrelated issue.

Republicans’ determination to advance the measure over Mr. Trump’s objections amounted to a rare refusal by his allies on Capitol Hill to accommodate the president’s hard-line stance, which has threatened to imperil the bill that authorizes pay raises for American troops. And it raised the prospect of a possible veto showdown in the final weeks of Mr. Trump’s presidency — on a popular measure that has not failed to pass in 60 years.

“I don’t want it on this bill, because we can’t have a bill if that language is on it,” said Senator James M. Inhofe, Republican of Oklahoma and the chairman of the Armed Services Committee, describing what he told the president about the legal liability provision. “We just had an honest disagreement, very friendly.”

Mr. Trump threatened in July to veto the legislation over a provision requiring the removal of Confederate leaders’ names from military bases, a measure that drew broad bipartisan support and was included in both the House and Senate versions of the bill. But with his time in office winding down, the president has become increasingly fixated on the idea of using the popular, must-pass legislation to repeal Section 230 of the Communications Decency Act of 1996, which protects platforms like Facebook and YouTube from being sued over much of the content posted by their users, and how they choose to take that content down.

The provision has attracted increasing criticism from both parties, but especially from Mr. Trump and his allies, who say tech companies have hid behind it while suppressing conservative views. The White House had quietly floated the idea that Mr. Trump might drop his objection to renaming military bases if lawmakers would go along on Section 230. The notion met with swift opposition from members of both parties.

On Tuesday night, Mr. Trump took to Twitter to warn that he would veto the bill if it did not include the repeal.

Lawmakers and aides had worked for days to resolve the dispute, with Democrats refusing to accept any change to Section 230 and Republicans quietly discussing potential compromises even as many privately conceded such a provision did not belong on the defense measure. By late Tuesday night, Republicans had reached a breaking point, concluding that they had no choice but to move the bill forward without it.

It is not yet clear whether Mr. Trump will make good on his threat to veto the bill, and less clear still whether lawmakers could muster the two-thirds supermajority in both chambers to achieve what would be the first veto override of his presidency.

But in an interview on Wednesday, Representative Adam Smith, Democrat of Washington and the chairman of the House Armed Services Committee, hinted that such an outcome was possible.

“Lane No. 1, at this point, is the president comes to his senses,” Mr. Smith said in an interview. “Lane No. 2 is we get as strong a vote as possible and we override.”

“I think we get a two-thirds vote in the House and the Senate and we get it done,” he added.

Kayleigh McEnany, the White House press secretary, said on Wednesday that the president “is serious” about the veto.

“The president will always defend our military, ensure that we get adequate defense funding, as he’s gotten $2.9 trillion so far,” Ms. McEnany said, “but he is going to put the pressure on Congress to step up on this.”

At least one Republican, Senator Josh Hawley of Missouri, who sits on the Armed Services Committee and opposed the base-renaming amendment, deriding it as “woke fundamentalism,” said he would vote against the final bill.

Using the abbreviation for the bill, the National Defense Authorization Act, Mr. Hawley wrote on Twitter: “The NDAA does NOT contain any reform to Section 230 but DOES contain Elizabeth Warren’s social engineering amendment to unilaterally rename bases & war memorials w/ no public input or process.”

But Mr. Smith said that after initially digging in over the base-renaming language amid a national outcry for racial justice, Mr. Trump appeared to have lost interest in the issue.

“He got distracted, and the basic strength of the other side of the argument won the day,” Mr. Smith said. “It’s also possible that the president and the people around him realized this was not a fight that they wanted to have.”

On no other issue have Republicans been as willing to challenge Mr. Trump as on national security, expressing rare public disapproval over his attempts to end interminable conflicts overseas and his cozy relationship with dictators in violation of human rights abuses.

In defying Mr. Trump on the military policy measure, Republican leaders also may have their eyes on a pair of runoffs in Georgia that will determine which party controls the Senate. The state is home to a dozen military installations populated by personnel who would be denied a pay raise and improvements to military housing if the military bill were derailed.

The protections provided by Section 230 have allowed Silicon Valley’s giants to grow rapidly. But the companies’ critics say the law gave them a free pass from policing content like explicit images of children and videos produced by terrorist groups. That criticism is bipartisan: President-elect Joseph R. Biden Jr. has called for the protections to be “revoked.”

Over the course of negotiations, Republicans in the Senate suggested a wide range of changes to Section 230, none of which interested House Democrats, said multiple people familiar with the matter.

One proposal was to attach language, championed by Republican lawmakers who believe social media platforms are slanted against conservatives, that would narrow the liability shield. They also floated language drafted by the Justice Department to limit the protections.

Republicans also proposed adding more moderate language from a bipartisan bill that would require platforms to quickly take down content in response to court orders, said two people familiar with the matter. Senator Brian Schatz, a Hawaii Democrat who is an author of that proposal, said in a Tuesday night tweet that the idea that Section 230 should be “repealed, with no hearing, in the defense bill, is goofy.”

Many in the president’s own party privately agreed with Mr. Schatz’s assessment. When senior Republican lawmakers were first told of Mr. Trump’s demand, some initially responded by laughing out loud, according to officials familiar with the discussions.

I’ve spotted my stolen dog… so why won’t the police give her back?

Who’s on the Ballot in Georgia?