Cornwall braces for influx of 80,000 tourists as hospitality industry reopens on ‘Super Saturday’

Cornwall could see a staggering 80,000 tourists entering the county this weekend, as businesses open their doors on ‘Super Saturday’.

There is expected to be an influx of visitors as hotels, campsites, pubs and restaurants are allowed to open on July 4, for the first time since lockdown.

Hotels, AirBnBs, campsites and caravan parks are gearing up to welcome tourists opting for staycations, rather than travelling abroad, amid the coronavirus pandemic.

Visit Cornwall chief executive Malcolm Bell said there could be between 75,000 and 80,000 visitors coming to Cornwall. 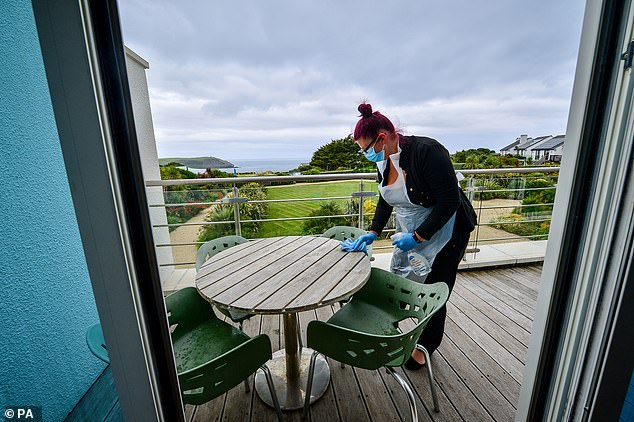 He said this was down 30% on usual tourist numbers at this time of year, but that this was expected to rise to 100,000 in the coming weeks, Cornwall Live reported.

Mr Bell said that not all accommodation providers plan to open this weekend, with some holiday parks and hotels opening next week.

He added that some would be running at 50% occupancy for the first few days to make sure they are ready for guests after bringing staff back from furlough.

He said: ‘It will feel a lot busier and the roads will feel busy as we haven’t had the run up that we normally have. But it won’t be as busy as normal at this time of year.

‘I have heard of people wanting to come down at midnight on Saturday but places have been sensible and said come down at the normal times.’

Cornwall Council leader Julian German said he was ‘incredibly impressed’ that hospitality businesses were able to adapt to ensure they are safe for customers.

Britain are set to see a rise in summer staycations this year, as cautious holidaymakers turn their backs on foreign trips and look closer to home for post-lockdown retreats. 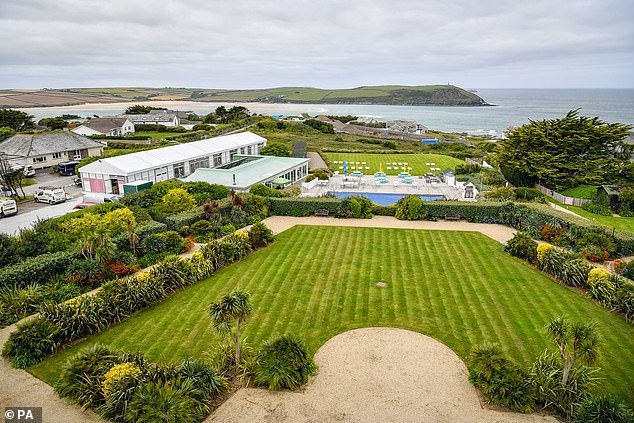 Millions are expected to desert their homes on Super Saturday to stay the night with friends and family for the first time in months.

Despite the efforts of ministers to establish dozens of air bridges to overseas tourist destinations, evidence suggests people are embracing holidays at home.

A Tripadvisor spokesperson told MailOnline: ‘We have seen a surge in Brits planning holidays in the UK this summer, which is a good sign for hotels and restaurants domestically.

‘Holidays at the seaside or in the countryside are in especially high demand – with travel searches for trips to the Lake District growing faster than anywhere else in the country.’

A total ten million people are expected to hit the road this weekend, a poll for the RAC found.

Nearly seven million are planning overnight stays with friends or family, while around two million drivers will head off for ‘staycation’ breaks at campsites. 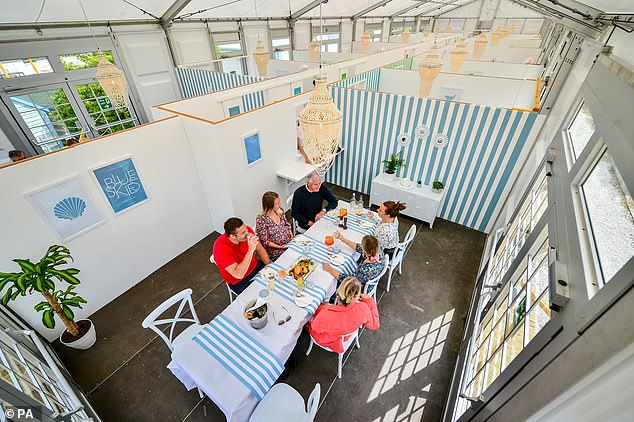 Diners take their places in family bubbles to test the UK’s only purpose built pop-up socially distanced restaurant, split into separate dining pods with serving hatches under one marquee, the Anti Social Club, in Polzeath, Cornwall

Some 680,000 drivers plan to visit caravan sites, while one million will stay in hotels, B&Bs or other self-catering accommodation.

Hotels have been overhauling operations to factor in social distancing while also giving rooms deep cleans.

Seaside resorts are preparing for a flood of beach-loving tourists and are drowning in bookings.

In anticipation of the surge in demand, a pop-up socially distanced restaurant has been built in Cornwall.

Diners at the Anti Social club in Polzeath, Cornwall, will be split into separate dining pods with serving hatches under one marquee.

And Hugh Ridgway, owner of the nearby St Moritz Hotel near Rock in Cornwall, which has been making preparations, said he has been inundated with bookings.

He said: ‘Our self-catering accommodations are full for July and August, which we would expect.

‘We are very lucky here in St Moritz that our architecture means all of our hotel rooms can be occupied in a safe and socially distanced manner.’ 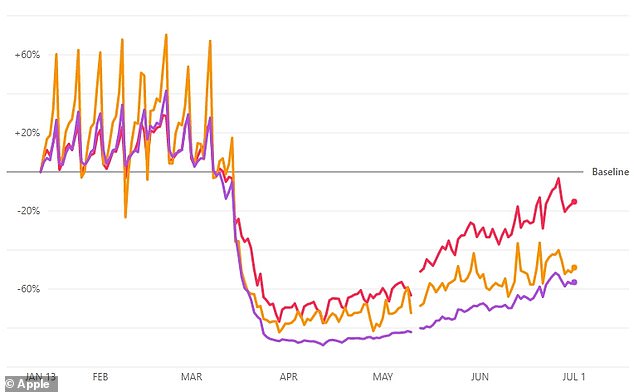 Travel in the UK has been creeping up as lockdown is loosened, and is expected to soar on Super Saturday as people go on retreats (London data, pictured) 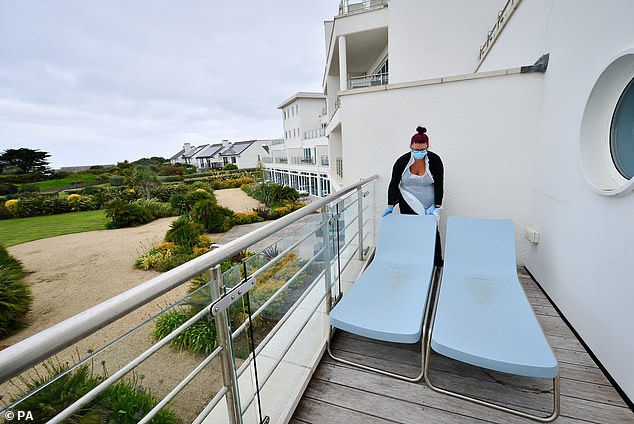 Hotels, AirBnBs, campsites and caravan parks are gearing up to welcome hundreds of thousands of tourists aching for a getaway after months cooped-up at home 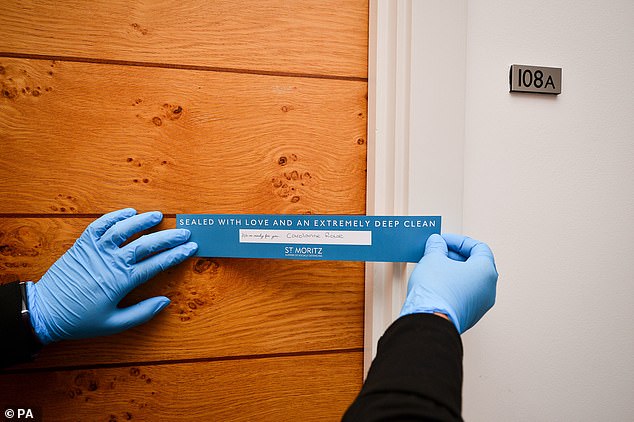 Confronted with the impossible problem of feeding guests at the restaurant while keeping diners two metres apart, the hotel has kitted it as a pop-up restaurant.

Up to 96 guests at the St Moritz Hotel & Spa will be seated in 16 private dining rooms, with staff wearing face masks serve food through service hatches in each room.

This ensures diners remain in their family ‘bubble’ and are separated from other guests and staff.

St Moritz’s surge in reservations is being replicated in hotels across the country.

UK Accommodation searches on Tripadvisor were growing at a faster rate than any other European country, with the exception of Ireland.

And the data also indicated that Britons were not willing to wait for their getaways –  half of all searches this week were for bookings this month. 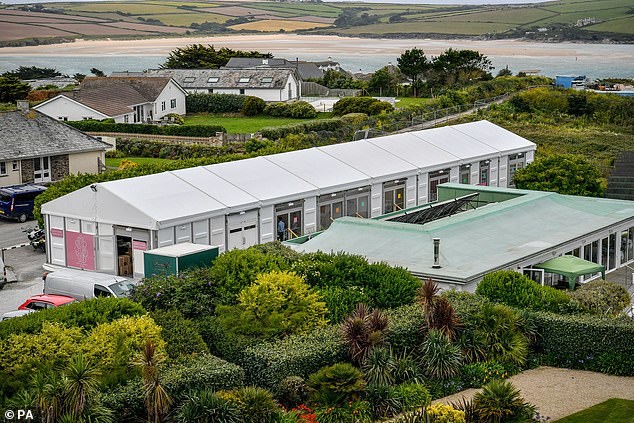 Seaside resorts are preparing for a flood of beach-loving tourists and are drowning in bookings (Polzeath, Cornwall, pictured) 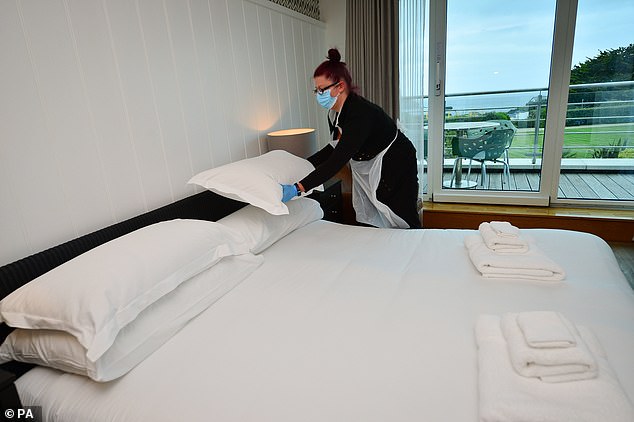 Countryside and seaside resorts were the most in demand places for tourists, with the Lake District a particularly popular hotspot (St Moritz pictured)

Countryside and seaside resorts were the most in demand places for tourists, with the Lake District a particularly popular hotspot.

Windermere, Whitby, Torquay, Bowness-on-Windermere and Newquay were the five towns where hotels attracted the biggest surge in traffic.

Picnic areas, cycling, hiking, canoeing and horse Riding were the most requested amenities, suggesting holidaymakers’ hankering to be outdoors.

Richard Leafe, the Lake District National Park Authority’s chief executive, today said he was delighted to be welcoming back guests to the Cumbria beauty spot.

He urged visitors to ‘be kind to one another and support our local businesses as we all get used to this new, post-lockdown, way of life’.

A New Museum Director’s First Challenge: Which Exhibits to Give Back