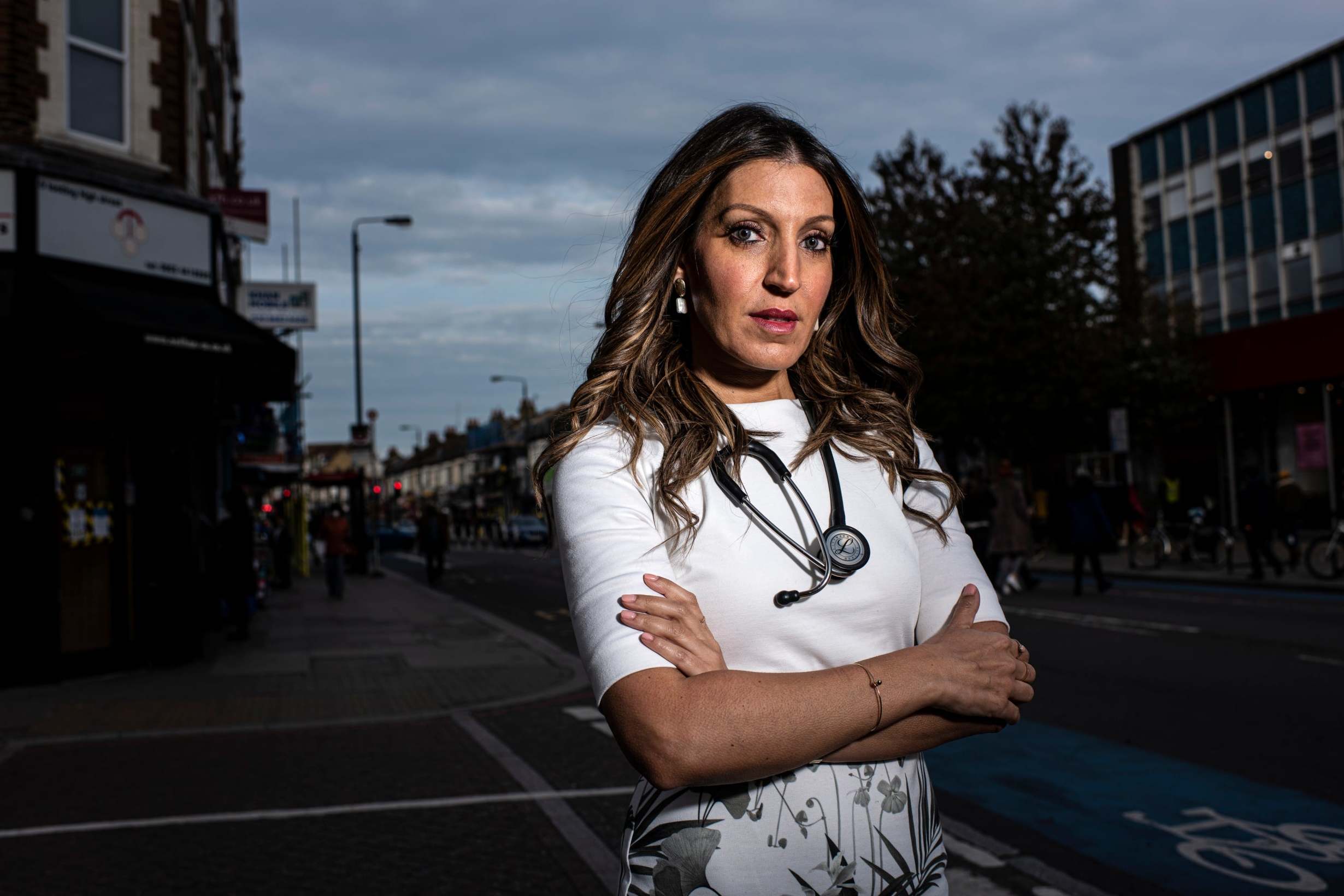 er Balham boxing gym hasn’t fully reopened but Rosena Allin-Khan – Labour MP for Tooting, former deputy leadership candidate and NHS doctor – has already ordered her new pair of gloves. They’re red, “obviously”, and a symbol she is ready for the next surge of battle as the country enters its first winter fighting Covid-19.

Allin-Khan, 43, might not look it when we speak, dressed in a bright yellow GAP hoodie on her rainbow-cushioned sofa in Tooting, but she is angry: angry that she still has to speak to her father through the fence at his care home; angry that ministers failed to implement an adequate Test and Trace system; angry at the Conservatives’ refusal to U-turn on free school meals.

Most of all, she’s angry at the government for rejecting her proposed Care For Carers policy, designed to support the mental health of over three million NHS and care workers in England.

When the pandemic hit, she dropped her Labour party deputy leadership campaign to spend more time working 12-hour shifts on the A&E wards at London’s Nightingale and St George’s hospitals, the latter of which she dubs “the lifeblood of Tooting”.

She trained as a junior doctor there before being elected to the House of Commons in 2016, and has since worked in humanitarian aid in Gaza, Israel, Africa and Asia. But none of that could’ve prepared her for the crisis she experienced at the height of the pandemic.

“I’ve seen genocide, I’ve seen mass starvation, I’ve seen everything,” Allin-Khan tells me, fresh from a socially-distanced weights class and still recovering from a long A&E shift at the weekend.

“I thought I was pretty sturdy – I am pretty sturdy – but I’m also human, and this experience was particularly heartbreaking because the families who were experiencing so much pain were feeling like their pain could’ve been avoided if this government had got on top of things sooner. That was a particularly tough pill to swallow.”

Also tough was seeing Covid expose existing inequalities. As a “proud British Muslim” who grew up with a Polish mother and a Pakistani father in a “turbulent” working-class household, Allin-Khan has spent a career fighting injustices.

During her campaign to be elected as an MP, she opposed friend and former Tooting MP Sadiq Khan to support women wearing the niqab face veil, and spoke out against the media for using her ethnicity to “try and humiliate” her (the Daily Mail claimed she’d been a secret swimwear model with a “glamorous past”).

Allin-Khan was voted in out of 119 candidates and her election coincided with the day of Jo Cox’s murder, which only fuelled her determination to be a voice for the voiceless in society.

When health secretary Matt Hancock famously told her to watch her tone during questions in the House of Commons in May, she turned the remark into her own anti-sexism slogan and posted pictures in a t-shirt emblazoned “how’s my tone hun?” outside parliament.

On Twitter (which she’s deleted on her phone for mental health reasons), she’s called transgender people her allies and regularly calls out the government for failing to stand up for working-class and BAME communities.

It’s been difficult, then, to watch the pandemic further widen many of these inequalities, says Allin-Khan. In Tooting where she grew up and now represents, she watched the economic effects of lockdown hit poorer households the hardest, and on the wards she saw how disproportionately BAME patients were affected. What got her through were the moments of unity, like the hospital chaplains and Imams who would stand in to pray for patients when their families couldn’t be there. “If someone from the right religion wasn’t available, one of them would stand in anyway,” she remembers, fondly. “I don’t think I’ve ever felt so proud to be part of a team.”

Allin-Khan got to know families intimately over the phone over those months and there are two that will always stay with her: one she spoke to every day to relay “increasingly desperate”messages to their deteriorating father, and another from which five family members turned up to say goodbye. “We knew very clearly we could only allow one in,” she says. “Watching the family have to make that choice… Yeah, it was pretty sobering.”

Naturally, the work took its toll. In a recent interview on Loose Women, Allin-Khan spoke of returning from her first shift on mothering Sunday and having to call ahead to make sure her daughters didn’t run to the door and cuddle her. “I had to ensure they stayed well away from me until I had taken off all my clothes and showered,” she said. “Some staff are avoiding their children. That’s desperately sad as you need human comfort when you return home from shifts.”

She also spoke of going home to cry after being forced to “rip live apart” with bad news. Wearing full PPE “stripped the humanity” from these moments, she tells me. “I’m definitely a hugger, so it felt very counterintuitive not to be able to give someone a hug or touch their arm or show a level of emotion in a physical way. You could just see how desperate people were. All the coping mechanisms for difficult experiences like this were really diminished for people and that upset me a lot.”

At home with her daughters and Welsh economist husband, Allin-Khan’s own coping mechanisms were similar to those of many across the country: she took up running for the first time using the Couch to 5k app, sweated through Joe Wicks workouts with the kids, listened to walking meditations on YouTube and binged TV like Big Little Lies and Grey’s Anatomy.

She struggled not being able to see friends, many of whom got sick. WhatsApp groups with her parliamentary football team and fellow GPs were a “lifeline”, but as the Labour party’s only doctor, the volume of messages in her inbox at 2am could be overwhelming. “[Colleagues] were all getting in touch with me because they knew I was speaking out about it and I had a platform,” she says. “I had this relentless self-imposed sense of responsibility.”

Even as someone who thinks of herself as “extremely resilient” and able to function on little sleep, Allin-Khan remembers the day the pressure all got too much. She’d just finished a Facebook Live event for people who were struggling with the effects of lockdown and realised: “Oh my goodness, this is how I feel”. The only time she’d experienced that feeling before was when returning from working in camps in Bangladesh. “It was crushingly exhausting. I got to the point where I just thought: ‘Rosena, you just need to stop for a minute because you’re only one person and you just need to take a break for a moment and just sleep.”

It’s a message she’s keen to hammer home as a mother (“my daughters’ life prospects aren’t going to be diminished because they hand in their homework on Monday instead of Friday”) and more publicly, in her role as shadow minister for mental health. She was elected in Keir Starmer’s first shadow cabinet at the height of the pandemic in April, so there wasn’t a moment to waste.

The Centre for Mental Health in England has predicted that 10 million people – almost a fifth of the population – will need mental health support as a direct consequence of Covid-19, with 1.5 million of those expected to be under-18s. She says ministers have made a “morally reprehensible” decision in not extending free school meals into the holidays for vulnerable children, and she is calling on education secretary Gavin Williamson to put an emergency mental health package in place for university students. Several of her best friends tried to take their own lives during her own time as a student at Brunel and Cambridge universities, so she finds the plight of current students “heartbreaking”.

Allin-Khan looks frustrated when I ask her about her Care for Carers plan being rejected by the Conservatives. “Mental health must not be a political football,” she says, listing the measures she hopes to see the government put in place: promotion of ways to improve mental wellbeing, ensured access to treatments despite restrictions, a commitment to collecting regular data on referral times. “It’s shameful of the government not to prioritise these. Clapping for the NHS on a Thursday is an empty gesture if it’s not followed up by a policy that will support our staff.”

More broadly, she wants to see ministers act more “humanely”. On the “shambolic” state of care homes, she thinks regular testing should be available for relatives so they can hug their parents and spouses (“people face being robbed of their last Christmas with their loved ones”), and she strongly supports leader Starmer’s call for two or three week circuit breakers – for mental health reasons as well as saving lives and the economy. “When the government says it could be like this for six months, that uncertainty breeds anxiety,” she says. “This way, they’d feel like there’s light at the end of the tunnel.”

That said, any circuit breaker must come “hand-in-hand” with some form of economic package for businesses, and tighter restrictions must not deter people from attending hospital. Allin-Khan is trying to remain optimistic about the winter ahead, but she is concerned about constituents missing crucial appointments because of Covid fears. For them and everyone across the country, her message is simple: “Please, please, please don’t hesitate to come and see us if you’re feeling unwell”. That’s the wonderful thing about the NHS, she smiles. Whatever winter brings, “our doors are always open.”

Vienna terror attack: Suspect on the run after three killed and 15 injured in gun rampage in Austria