Coronavirus UK: 68% of ‘shielded’ happy to return to workplace 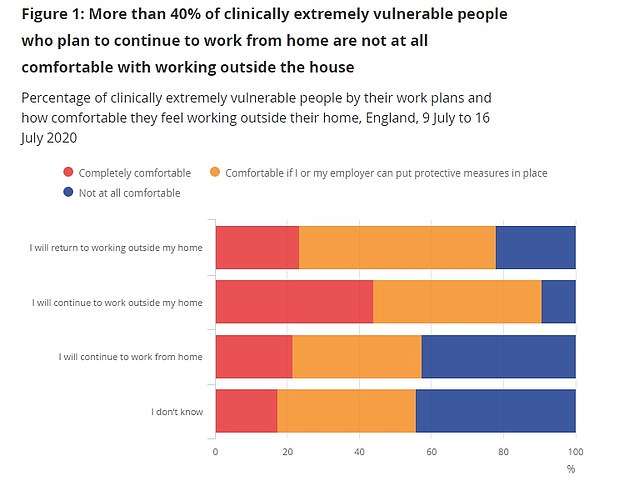 Two thirds of people who were shielding to avoid catching Covid-19 are happy to go back to work, a survey has revealed.

Twenty-four per cent of ‘clinically extremely vulnerable’ workers are now ‘completely comfortable’ going back to work outside the home.

Another 44 per cent are happy to return if protective measures are put in place, the Office for National Statistics (ONS) poll revealed.

But around one in 20 people in England who had been shielding to avoid catching the coronavirus are not planning on returning to work any time soon.

Some six per cent of those classed as extremely vulnerable, including those with rare diseases, did not intend on going back to their job this year.

A further 21 per cent said they planned to continue working from home as they had done during the shielding period, which started in March.

Some 35 per cent indicated they would return to their previous place of work in the next four months.

It follows a survey by leading charities which found 42 per cent of Britons who had been shielding would not stop on August 1.

Around one in 20 people in England who had been shielding to avoid catching the coronavirus are not planning on returning to work any time soon (stock, work setting where people wear masks)

A total of 2.2million people in England were identified by the Government earlier this year as being clinically extremely vulnerable (CEV) to the impact of Covid-19.

Their immune systems were deemed too weak to cope with the burden of a coronavirus, should they catch it.

They were advised to shield from others – not even leaving the house to buy food or medicine – until last Saturday, when the programme was officially paused.

UP TO 80% OF THOSE SHIELDING WILL NOT STOP

Up to 80 per cent of people who have been shielding said they would not stop on August 1, a survey showed.

Leading charities Asthma UK and the British Lung Foundation surveyed nearly 4,000 people who had been shielding in England.

They found that 42 per cent planned to continue shielding after August 1 – the date when shielding was paused.

Some 40 per cent are undecided.

When asked how long they will continue to shield for, two thirds said they will need to be happy the risk of catching coronavirus is low, with 21 per cent saying they will wait until there is a vaccine.

The majority also felt that shielding and lockdown has been lifted too soon with 78 per cent saying they thought  the government in England has been too quick to lift shielding restrictions.

The leading respiratory charities have heard first-hand from thousands of people whose lives have been turned upside down by shielding. For many it’s been extremely isolating and difficult and the charities fear those who want to remain shielding are at risk of being forgotten.

Approximately 623,000 (28 per cent) of CEV people were working before receiving shielding guidance.

The Office for National Statistics (ONS) conducted a survey between July 9 and 16 – before the guidance changed – on 4,081 people.

Six per cent were certain they did not plan to return in the next four months, despite Boris Johnson’s pleas to employers to get their staff back to work.

That means an estimated 38,000 shielders who were already working before Covid-19 will not return to work soon.

Tim Gibbs, from the ONS public services analysis team, said: ‘Before being advised to shield, almost a third of CEV people worked.

‘Of those who said they would return to work outside the home, 68 per cent reported they felt comfortable doing so, if either they or their employer put protective measures in place.’

The figures also show that, of those surveyed, 60 per cent reported completely following shielding guidance – the equivalent of an estimated 1.3million people.

Some 65 per cent said they had received no visitors, except for support with personal care.

On July 6 the Government advised that CEV people could form a support bubble with another household, as well as be in open spaces for exercise and other reasons.

The ONS survey suggests that, of those who had received a visitor in the previous seven days not providing personal care, 36 per cent only had visitors from their support bubble, while 35 per cent had chosen not to form a bubble at all.

T cells on the front line of COVID-19 response