Initial estimates made during the early stages of the pandemic ranged from around 4 to 7 days.

However, numerous reports have since emerged, estimating an incubation period of anything from one to 34 days.

Currently, governments are planning their mitigation strategies based on a maximum incubation period of 14 days.

Now, Prakashini Banka and Catherine Comiskey have conducted a modeling study highlighting the variability in this period, including the potential for incubation that extends beyond 14 days.

An accurate estimate of the incubation period distribution for SARS-CoV-2 is essential for modeling the virus’s spread and the effectiveness of control measures.

Banka and Comiskey warn that since the incubation period may be longer than initially estimated, detailed surveillance of self-isolation periods and other protective measures is now needed.

A pre-print version of the paper is available on the server medRxiv*, while the article undergoes peer review. 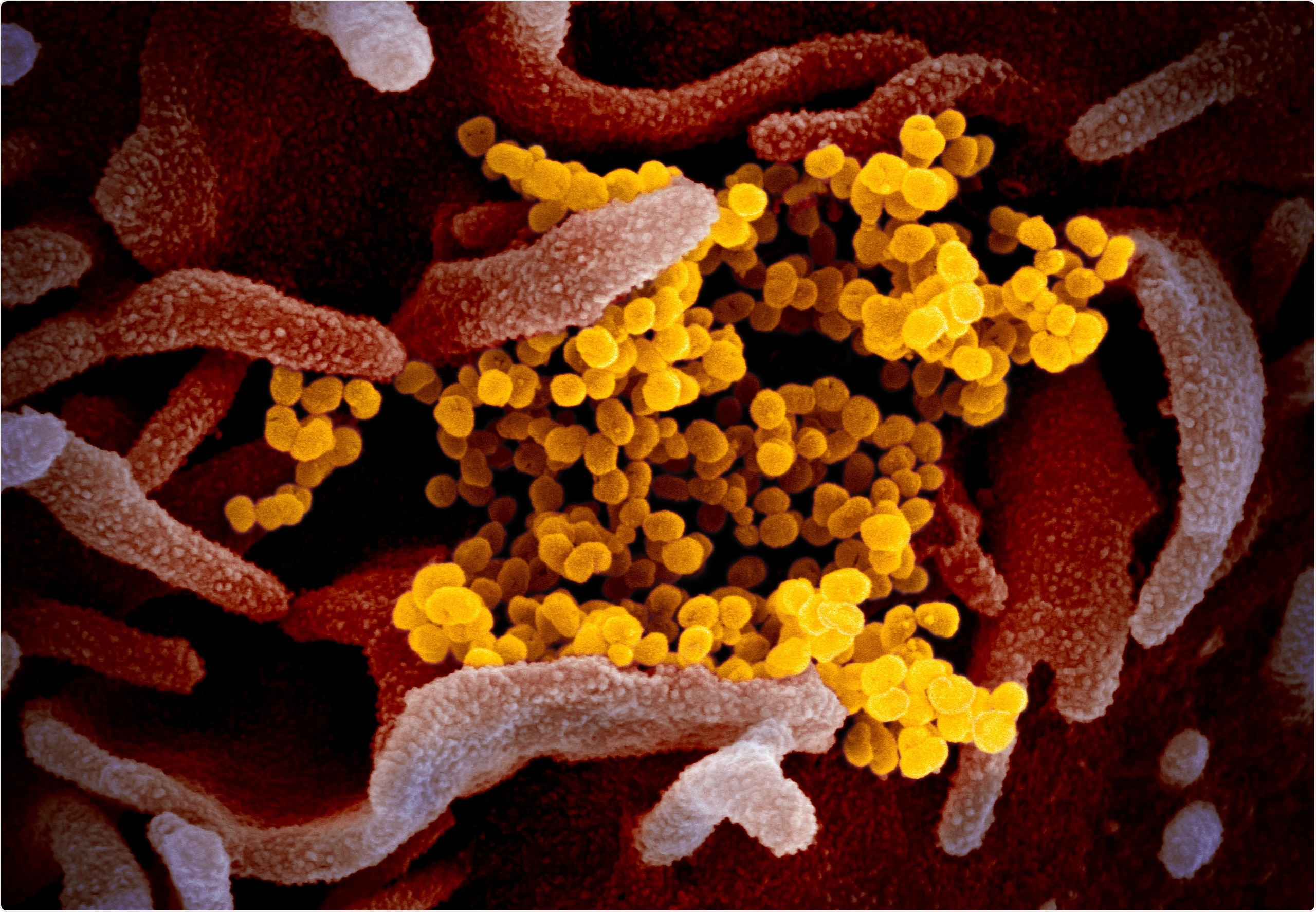 This scanning electron microscope image shows SARS-CoV-2 (yellow)—also known as 2019-nCoV, the virus that causes COVID-19—isolated from a patient in the U.S., emerging from the surface of cells (pink) cultured in the lab. Image captured and colorized at NIAID’s Rocky Mountain Laboratories (RML) in Hamilton, Montana. Credit: NIAID

The challenges faced in modeling the spread of SARS-CoV-2

When an epidemic results in both symptomatic and asymptomatic infections, it becomes difficult to establish disease prevalence and transmission.

“Mathematical modeling of the effective reproductive number R of an epidemic, the spread of infection, and the subsequent decisions on planning and mitigation is fully dependent on accurate and up to date estimates of the key modeling parameters,” say the researchers.

Given the improvements in surveillance and monitoring since the first cases were identified, Banka and Comiskey have now conducted a scoping review and meta-analysis of the parameters of the global incubation period of COVID-19.

The aim was to provide an updated estimate of the incubation period distribution that will help improve modeling estimates of the effective reproductive number R and, in turn, estimates of the prevalence of asymptomatic cases.

What did the researchers do?

A confidence interval (CI) is an estimate that indicates the range of values that the actual value could lie within. Therefore, the CI helps to quantify the uncertainty of an estimate when the true value cannot be known.

Banka and Comiskey say this study has found that the mean incubation period may be significantly longer than has previously been estimated.

“The findings highlight the variability in the mean period and the potential for further incubation beyond 14 days,” they write.

It is essential to maintain an accurate and updated estimate

The researchers say it is essential to maintain an accurate and up-to-date estimate of the SARS-CoV-2 incubation period as the virus continues to spread so that mitigation measures and advice to the general public can be properly planned.

“It is equally essential that the mitigation strategies on affected communities and hospital planning requirements that are determined from modeling scenarios are based on reliable and accurate global estimates of the incubation period,” they add.

“There is an ongoing need for detailed surveillance on the timing of self-isolation periods and related measures protecting communities as incubation periods may be longer,” concludes the team.

medRxiv publishes preliminary scientific reports that are not peer-reviewed and, therefore, should not be regarded as conclusive, guide clinical practice/health-related behavior, or treated as established information.

Americans are OVERESTIMATING their risk of getting coronavirus, claims California study

Meal Distributions And COVID Testing Ahead Of Thanksgiving

Aussies urged to post early ahead of ‘record-breaking’ Christmas