COVID-19: Number of people rushed to hospital with coronavirus symptoms has soared and experts worry

Experts have warned that more people will die from the coronavirus as the number of active cases rise in Australia.

Six of those remain in intensive care while another two people remain in hospital in New South Wales. 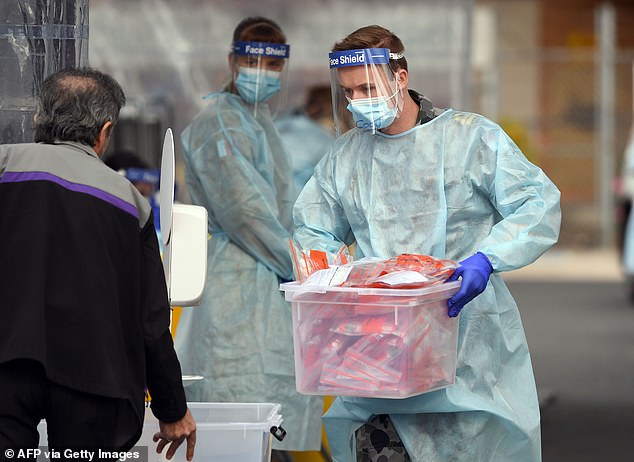 Twenty-six people are in hospital with coronavirus around the country. There are 22 people in hospital in Victoria, with six in the intensive care unit. Pictured: graph of hospitalisations in Australia as of yesterday. Two more people have been placed in ICU since it’s creation

Victoria’s Chief Health Officer Brett Sutton warned there is the possibility more deaths will happen after the state’s huge spike in cases over the last fortnight.

‘When you’ve got significant community transmission, when you’ve got 70-odd cases every day, there is absolutely a possibility, an expectation, that some of those people will die,’ he said.

Of the new cases in Victoria, seven are linked to outbreaks at schools as of Thursday.

With 17 schools closed in recent weeks for cleaning following COVID-19 cases, Professor Sutton said he will review whether students in the locked-down areas should return to school.

A large proportion of the state’s recent cases have been traced back to infection control breaches by security staff at hotels hosting returned travellers.

Thirty-six north Melbourne suburbs have now been locked down to contain the outbreak.

The lockdown will last for four weeks and came into force from 11.59pm on Wednesday, with locals urged to avoid any non-essential travel.

Meanwhile, Coles has been forced to impose a two-pack limit on products including butter, cheese and fresh milk in Victoria, Tasmania and parts of NSW after several staff members tested positive to COVID-19 at their Laverton distribution centre.

A Marvel Stadium security contractor also tested positive to COVID-19, but AFL matches at the venue will go ahead as planned.

Mary-Louise McLaws, a UNSW epidemiologist and expert on the World Health Organization Experts Advisory Panel, told Daily Mail Australia the numbers lead people into a false sense of security and the pattern over the last 14 days is ‘frightening’.

She said we have gone from an average of cases in the high 90s to being in triple digits.

Professor McLaws said Victoria is a particular place of concern but the government needs to be commended for its actions.

‘Locking down those areas is an important step. When you manage an outbreak it’s never a pleasant thing to do. If you don’t act fast enough you end up in a place you can’t come back from but if you act fast, like two weeks ago, complaints start to roll in,’ she said. 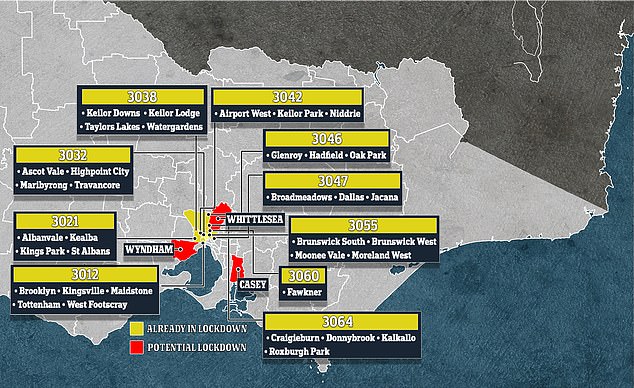 Thirty-six north Melbourne suburbs have now been locked down to contain the outbreak. Pictured: the locked down postcodes 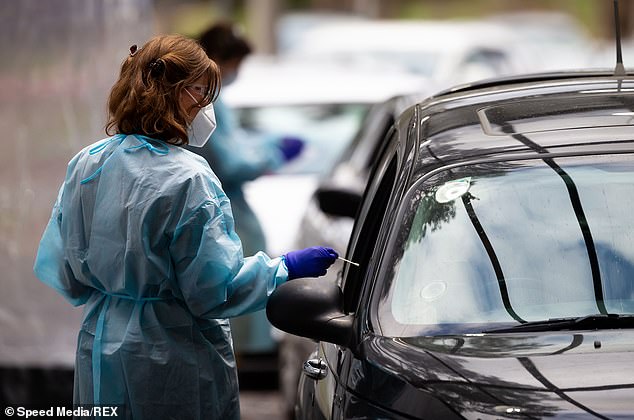 Victoria’s Chief Health Officer Brett Sutton warned there is the possibility more deaths will happen after the state’s huge spike in cases over the last fortnight. Pictured: testing clinic in Melbourne

She said the government needs to take it a step further and prevent people from leaving for work or study as studies suggest people are contagious two weeks before symptoms show.

Professor McLaws said if the government is unwilling to do that then they should make it mandatory for anyone leaving the area to wear a cloth mask on their way to and from their place of employment regardless of whether they are sick or not.

The World Health Organisation updated their guideline on masks on June 5 to state they can: ‘either for protection of healthy persons (worn to protect oneself when in contact with an infected individual) or for source control (worn by an infected individual to prevent onward transmission)’.

Almost 400,000 young Australians have completely wiped out their superannuation amid the pandemic