Australians may not get a coronavirus vaccine for more than a year, despite the government claiming to have secured millions of doses.

Prime Minister Scott Morrison last month announced a deal had been struck to buy 30 million doses of the AstraZeneca vaccine from the UK once it was approved.

About 3.8 million of the doses were expected to arrive on Australian shores in January if trials proved successful.

The government has also agreed to buy a University of Queensland/CSL vaccine on track for mid-2021 that began trials in July. 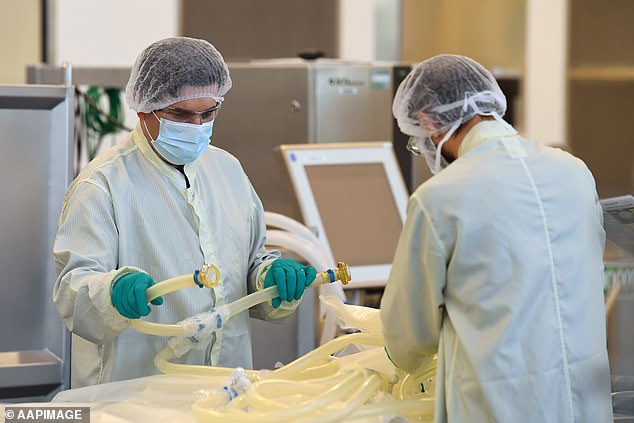 The government has also agreed to buy a University of Queensland/CSL version on track for mid-2021 that began trials in July. Pictured: Scientists are seen at work inside of the CSL Biotech facility in Melbourne on September 7

But Federal Industry Minister Karen Andrews warned it could take longer until a safe formula is developed.

She said biotech company CSL has already produced protein-based vaccines which could be rolled out immediately once approved, but there would be ‘significant’ work to do if the vaccine needed to be non-protein based.

‘I would hope that we would be able to do it in about the nine to 12-month time frame, but I think we need to be really conscious that with a vaccine, there are a lot of variables in there,’ she told ABC’s Insiders.

But Health Minister Greg Hunt said Australia is in a very strong position with the AstraZeneca protein-based vaccine, and that Ms Andrews was responding to a hypothetical question.

‘When you take away that hypothetical, when you look at the broad reality, Australia is on track for first quarter commencement of that roll-out,’ he said.

This month’s federal budget forecasts rely on a coronavirus vaccine being available by late 2021.

The jab being developed at Oxford University is the only overseas candidate that Australia has agreed to buy while other developed countries have signed several deals. 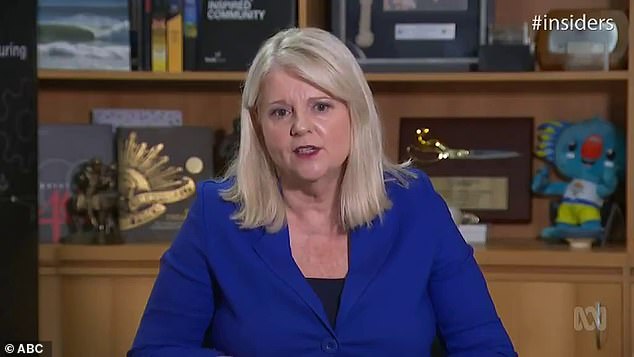 Federal Industry, Science and Technology Minister Karen Andrews (pictured) has warned a vaccine could take longer to produce if it proves to be non-protein based

Last month, the opposition slammed Mr Morrison for ‘putting all of Australia’s eggs in one basket’.

The Oxford University/AstraZeneca vaccine is in the third phase of trials and is considered one of the best hopes in the world, with regulatory approval expected to be sought shortly.

However, doubt was cast over the candidate’s future when trials were paused in September over safety concerns after a patient became seriously ill.

After a month-long hiatus, the UK drug maker announced on Saturday the trials would resume after investigators found the illnesses were unrelated to the virus.

It wasn’t just Ms Andrews who delivered disappointing news on the COVID-19 crisis, with Victorian Premier Daniel Andrews telling Victorians they will have to wait a further day or two for details on the much-anticipated reopening from lockdown.

Mr Andrews quickly drew the wrath of business groups after he stalled on Sunday in announcing the promised steps to reopening by up to 24 hours.

Health authorities are waiting on results of about 1,000 swabs after 3,000 people were tested over an outbreak in Melbourne’s north.

Mr Andrews said it would have been irresponsible to ‘wing it’ when so many tests haven’t been cleared.

But he clarified the state is still on track to be to have an opening before November 1.

‘We had intended to be able to make announcements today, but it is just not appropriate while we wait for these test results to be assuming we know what the results are,’ the premier said. 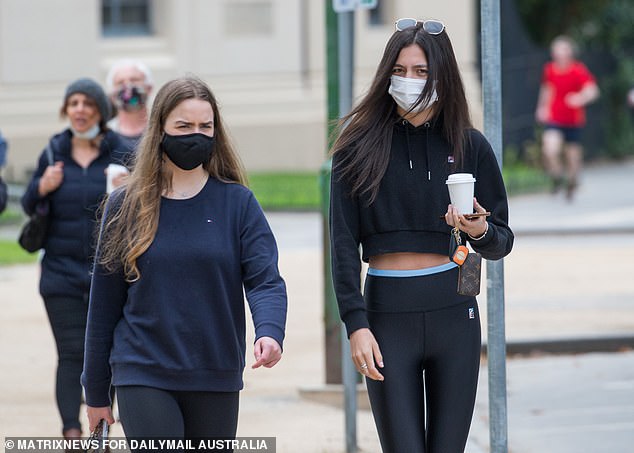 Victorian Premier Daniel Andrews told Victorians on Sunday they will have to wait a further day or two for details on the much-anticipated reopening from lockdown. Pictured: People exercising in Melbourne  amid COVID-19 restrictions

But the federal government said Victoria’s public health system is either up to the task of dealing with future outbreaks or it is not.

‘The decision to keep businesses closed suggests that there is still not sufficient confidence within the government that their systems can support reopening,’ Prime Minister Scott Morrison said in a joint statement with Treasurer Josh Frydenberg and Health Minster Greg Hunt.

‘This is a profound disappointment.’

‘We cannot go on like this. Victorians cannot hang on week to week. People are at a financial and mental breaking point,’ Ms Westacott said in a statement.

‘That a city of five million people can continue to be locked down because of a handful of cases in a contained geographic area beggars belief,’ Mr Willox said.

Victoria reported seven new cases on Sunday, with six linked to the concerning outbreak in the city’s north which involves 39 people across 11 households.

Elsewhere, NSW has recorded no new locally transmitted cases for a third consecutive day while seven new infections were reported in overseas travellers in hotel quarantine.

What is the government doing to secure a vaccine?

3. There is participation in the international Covax facility, which is an international consortium to give participant nations access to a variety of potential vaccine candidates.

4. Onshore manufacturing in Australia either directly or under licence, including through CSL.

A health department spokesman said: ‘We are confident that these investments and actions will secure early and sufficient access to a safe and effective vaccine.’

Covid-secure eating and drinking: The top restaurants and bars with heated terraces and blankets

A boy who bonded with Biden over stuttering will write a children’s book.

CHRISTOPHER STEVENS: Back to the seaside with a bang, and a most unexpected murder