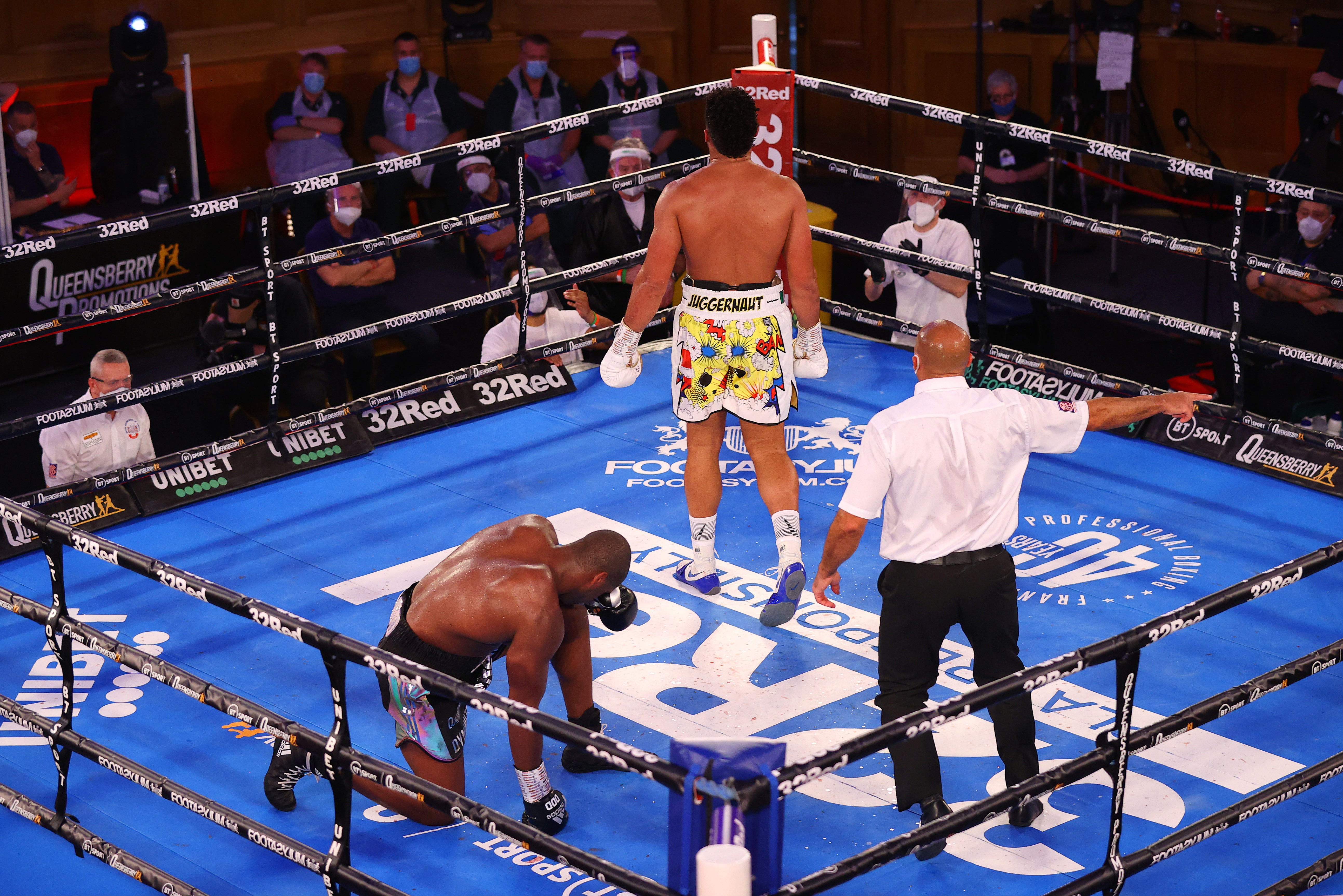 Joyce produced the best performance of his career to stop Dubois in the tenth round of tonight’s eagerly-anticipated all-British heavyweight clash and enhance his credentials for a world title shot.

The 35-year-old ended his younger opponent’s unbeaten 15-fight start to his professional career and claimed his British and Commonwealth titles, as well as the vacant European belt at London’s iconic Church House.

Joyce, who only turned professional at the age of 31 after winning a silver medal at the Rio Olympics in 2016, has now set his sights on a clash with Ukraine’s Oleksandr Usyk for the WBO world heavyweight title.

Meanwhile, Dubois was taken to hospital immediately after his first loss due to a horrible eye injury inflicted by Joyce’s stinging and consistent jab.

Follow all the reaction with Standard Sport’s LIVE blog!

An update on Daniel Dubois – the 23-year-old has been taken to hospital for further assessment concerning that eye injury.

“I’ve taken some big shots before. Daniel has got some power but I’ve felt power like that before. With my experience I’ve learnt to ride them. I felt his power but I was happy to take, but also not to take it.

“I started looking at the eye and it was starting to swell up. I was trying not to get too close but also not get backed up on the ropes.

“He caught me with a good jab – I couldn’t see out of the eye. It just happens.

“I couldn’t see out of it – I was trying my best. I’ve been hit harder, but it was where I was positioned and he hit me on the eye.

“I was thinking of how to break him down. Joe rode his punches well. I was maybe a bit trigger happy. It is what it is, Joe won.”

Joe Joyce says his first emotion was just “glad it was all over”.

Daniel Dubois admits he needs to “be smarter” and is very gracious in defeat, but there’ll be plenty of criticism coming his way for the way that ended.

David Haye is not a happy man. “I’d rather get knocked spark out,” he says on BT Sport.

Carl Frampton agrees, saying he “quit” and he’d “rather be dragged out”. He adds that he had Dubois a point ahead at the time of the stoppage.

It was rather anti-climatic in the end there. Joyce got through with another jab onto that eye and it swelled completely shut. Dubois took a step back before going down on one knee and deciding he wanted no further part in it.

“Nine minutes of concentration, nothing stupid,” say Joyce’s corner. They know this is there for him.

That’s better than nothing stupid! It’s all over!

A jab gets through onto that right eye and Joe Joyce has stopped Daniel Dubois in the tenth!

This is absolutely on a knife-edge at the moment, you could not call it, either on what’s gone before or by guessing what’s to come.

It feels like Dubois is running out of puff, the big shots are now few and far between, though as I write that a strong left jab gets through.

Joe Joyce will be thinking that the longer this goes on the more the balance swings in his favour. Three rounds to come after this and winning two of them may well end up being enough…

The tempo has dropped a little now. I’m not sure anyone, and most certainly not the Dubois camp, thought this would be going this far.

A couple of times Dubois is warned for low blows but nothing serious enough to bother Joyce, who is resolute. It’s been admirable stuff from both men.