An emotional Dean Smith paid tribute to his late father after securing Aston Villa’s Premier League survival on a pulsating final day of the season. A long and fraught campaign culminated in a 1-1 draw at West Ham, and it was only natural for Smith’s thoughts to turn to his father Ron, who died of Covid-19 at the end of May aged 79.

“It’s been an emotional period,” said Smith, after emerging from a jubilant Villa dressing room with a beer in hand. “I’ve just spoken to the whole family in their living room and they’re immensely proud. A lot of people have lost their lives due to the pandemic, including my father, and he’ll be looking out for us, I’m sure.”

Villa’s draw was enough to keep them in the division on 35 points, one ahead of Watford, who lost 3-2 at Arsenal, and Bournemouth, whose 3-1 victory at Everton was too little, too late.

“To be honest it feels better than getting promoted, because we had a big turnaround in the summer,” said Smith. “We’ve been written off by everybody. We had to build a squad, build a culture. To get to where we are is an unbelievable achievement for the whole of the group.”

Smith will meet the club’s owners on Monday to discuss plans for next season and the future of the captain Jack Grealish, who may leave. Pressed on Grealish’s immediate future, Smith replied: “Well, he goes out and gets drunk with me. That’s what happens now.”

Eddie Howe refused to commit his future to Bournemouth after their five-year stay in the Premier League ended in what the manager described as “the hardest moment of my career”.

Asked whether he was determined to lead the club’s fight to regain its Premier League status next season, Howe replied: “I am determined for Bournemouth to get back in the Premier League. In terms of the future and what it looks like, that is for another day. There is a lot to take in because it was not just about today, it was about the season as a whole.

“It has been a hugely frustrating one from my perspective as we have not hit the standard of performance we would expect from this group. There will be a period of reflection but it cannot be too long as the next season rolls in quickly.”

Howe added: “The next step for me is to speak to the owner and directors and see where we go from here. We need to have a strong vision of the future. I need to speak to the people in control at Bournemouth and see their vision and the best way forward for the club.”

A downcast Troy Deeney cast serious doubt on his future at Watford after they were relegated despite an improved performance at Arsenal. The captain, who has been dogged by knee problems but still scored his 10th league goal of the season with a penalty at the Emirates, suggested he may end his decade-long spell with the club, although he later scotched suggestions that he might retire at the age of 32. 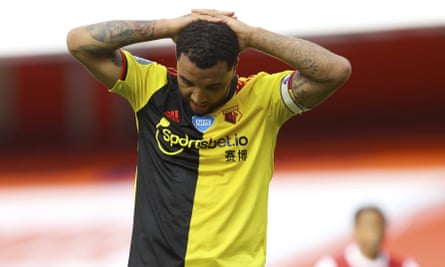 “I don’t know if this will be my last game for Watford,” he said. “I don’t know what the future holds. I have a knee operation next week. Then let’s see. Clubs can go in different directions, players can go in different directions. I’m not saying it’s my last game but, if it is, I’m happy I went out on my shield and gave everything I had … If this is my last game in the Premier League, I can say I’ve made a contribution to Watford and made it so Watford v Arsenal is a big game now.

Asked whether Watford’s rotation of managers – Javi Gracia, Quique Sánchez Flores and Nigel Pearson were sacked during the season – had contributed to their demise he admitted soul-searching would be required throughout the club.

“From top to bottom we do an audit and look at it,” he said. “We can’t say we got it right because ultimately we failed. There’s no point standing and dancing around it; it is what it is.”

Transport for London secures £1.8bn bailout to keep it operating over winter

Where your hard-earned taxpayer dollars will be spent

Hundreds Gather For Wedding At Hilton Chicago/Northbrook With No Masks — How Was This Allowed To Happen?