An explosive transcript containing intimate details about Gladys Berejiklian’s relationship with her secret boyfriend was accidentally published by ICAC on Thursday – as cranky late night phone call between the couple was revealed.

Former MP Daryl Maguire was cross-examined about his relationship with the NSW premier at the Independent Commission Against Corruption (ICAC) on Thursday afternoon.

The ex-politician admitted he had an ‘on again, off again’ love affair with Ms Berejiklian which began sometime about ‘2015, 2016’ and ended in ‘August, September (of this year) … I can’t be clear’.

He confessed to discussing his ‘problems in life’ with Berejiklian, 50, including the prospect of a future spent together. 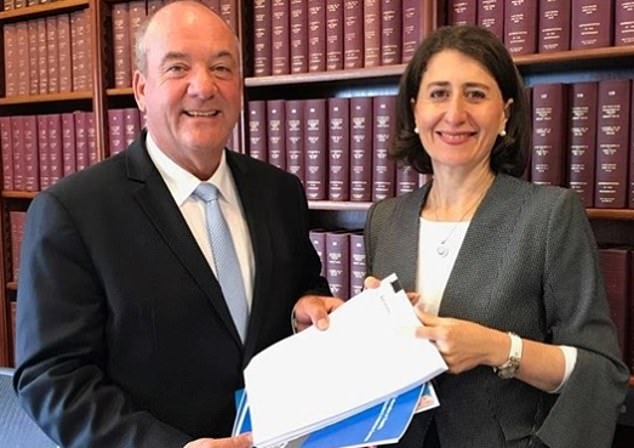 A two-hour closed hearing was also held for counsel assisting ICAC Scott Robertson to examine information on the pair’s relationship which ‘significantly outweigh the public interest’.

ICAC then accidentally published details from the private examination to their website on Thursday afternoon.

The transcript was online for more than 30 minutes and it is not known how many people saw its contents.

‘An erroneous version of the transcript from this morning’s session was uploaded to this website today at approximately 4.45 pm,’ an update to the ICAC website read.

‘That version was removed from the website at approximately 5.18 pm.

‘A corrected version has since been published.’ 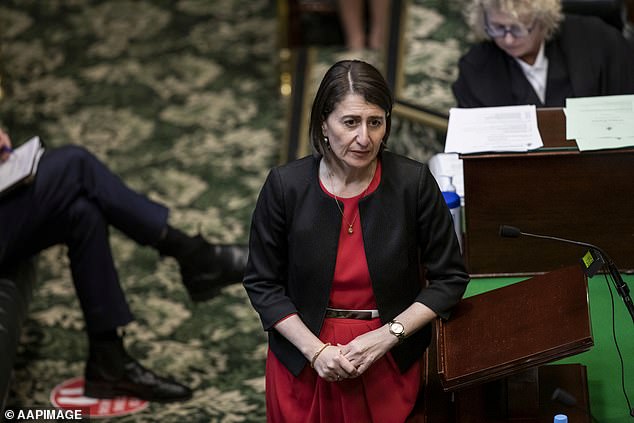 Earlier on Thursday, a late night call between the premier (pictured on Thursday) and her former boyfriend revealed they were planning a future together

Earlier on Thursday, a transcript of a call intercepted by corruption investigators appeared to show Ms Berejiklian and Mr Maguire planning for the future.

Mr Maguire was full of complaints as he spoke to the premier just before bedtime at 9.23pm on February 14, 2018.

‘I’m working bloody hard because (indecipherable) Garden has fallen through,’ he fumed, according to a document before the inquiry.

The call came months before Ms Berejiklian sacked Mr Maguire following a scandal over him trying to broker property deals, including for Chinese developer Country Garden.

In an apparent reference to him needing ‘somewhere to go’ after state politics, Mr Maguire told the premier ‘I can’t not go to nothing’.

He added there was ‘no future’ for him in government.

The premier said: ‘Hokis … I need you to process in your head what you want to do right and I also need to come to a realisation that it’s not got anything to do with me (…).’

Ms Berejiklian said: ‘But that’s a bigger picture issue I need to figure out.

Mr Maguire replied: ‘I just got to sort out you know with these kids and stuff what’s going to happen that’s all I’m worried about.’

‘I’m just trying to process things in my own head that’s all. You’ve got think about your stuff and I’ve got to think about my stuff that’s all,’ she said. 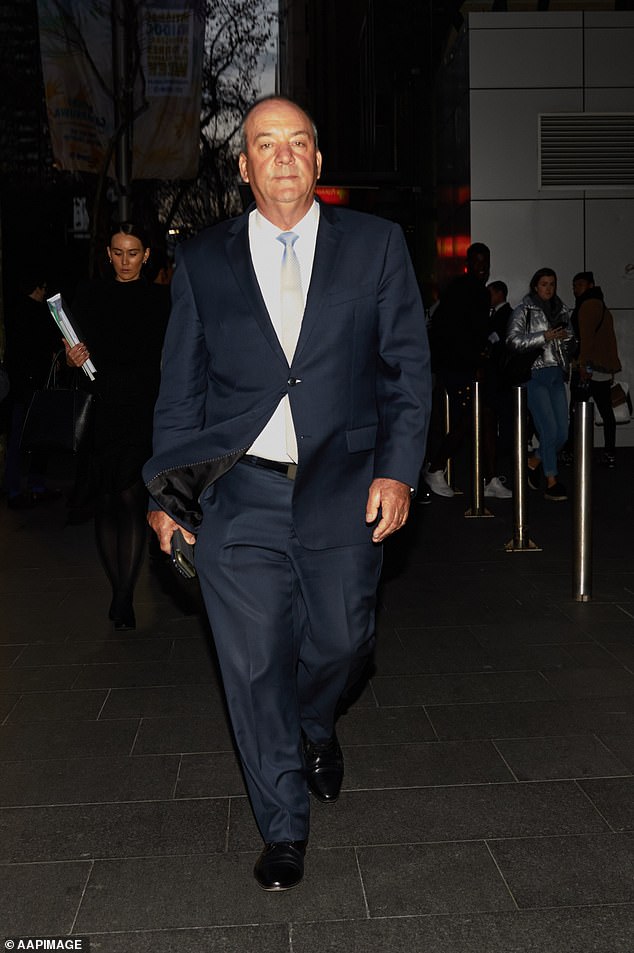 Daryl Maguire admitted he had an ‘on again, off again’ love affair with Ms Berejiklian which began sometime about ‘2015, 2016’ and ended in ‘August, September (of this year) … I can’t be clear’

Maguire said: ‘Hmm well I am working on that Gladys. I’m going to bed see ya later.’

ICAC is attempting to pin down what the Liberal leader knew about Mr Maguire’s financial dealings, including a sale of land at Badgerys Creek, near the site of Sydney’s under-construction second airport.

The inquiry has heard then-Wagga Wagga MP Mr Maguire hoped to make up to $1.5million in the sale of land – which was owned by racing heiress Louise Waterhouse.

He could therefore clear his debts before retiring from Parliament and embarking on a new life, possibly with the premier.

In sensational evidence, Mr Maguire this week admitted ‘monetising’ his parliamentary position as an MP, parliamentary secretary and chair of the ‘friends of the Asia-Pacific’ committee.

He confessed to running a cash-for-visa scheme from his office and being a secret director of a company, G8way International. G8way ‘ultimately’ sought to sell access to the highest levels of government. 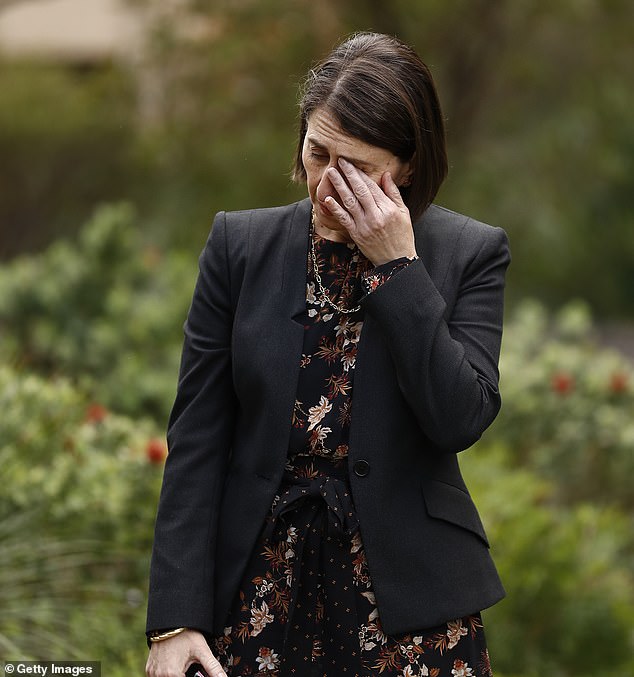 On Monday, the premier admitted being in a five-year ‘close personal relationship’ with Mr Maguire – and candidly denied wrongdoing. ‘I stuffed up in my personal life,’ she said

ICAC also heard Mr Maguire took Ms Berejiklian for a feed at a pub in Wagga Wagga and to a private dinner party with G8way International boss Phil Elliott and his partner Karen Barbey.

Ms Barbey was questioned by investigators at Wagga Wagga Police Station on July 9, 2019.

She told them Mr Maguire was a friend who she and her partner often enjoyed ‘quite a bit’ of red wine with.

Ms Barbey said she met the premier on multiple occasions, including at Mr Maguire’s home.

‘We had dinner at night as well and I’m trying to think. And we went to Romano’s for dinner one night,’ she said.

She confirmed to officers that four people – herself, Mr Elliott, Mr Maguire and Ms Berejiklian – attended Romano’s, a pub in Wagga Wagga.

At Mr Maguire’s house for dinner, there were ‘some other security’ people in attendance, Ms Barbey said. 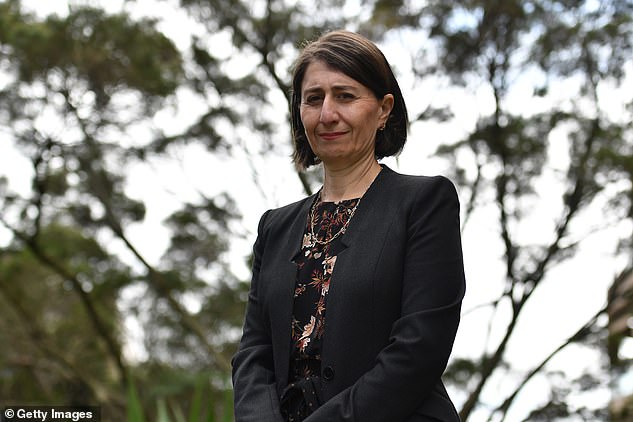 Former MP Daryl Maguire was cross-examined about his relationship with the NSW premier at the Independent Commission Against Corruption (ICAC) on Thursday afternoon. Ms Berejiklian is pictured on Wednesday

Ms Berejiklian has refused to disclose whether she met up with her former boyfriend on taxpayer-funded trips to the New South Wales country town.

On Monday, the premier admitted being in a five-year ‘close personal relationship’ with Mr Maguire – and candidly denied wrongdoing.

‘I stuffed up in my personal life,’ she said.

At one point during Thursday’s hearing, Mr Maguire was asked if his relationship with the premier continued to the present day.

‘Are you still (in a relationship?)’ Mr Robertson asked.

‘Not after this I wouldn’t be,’ he said, drolly. 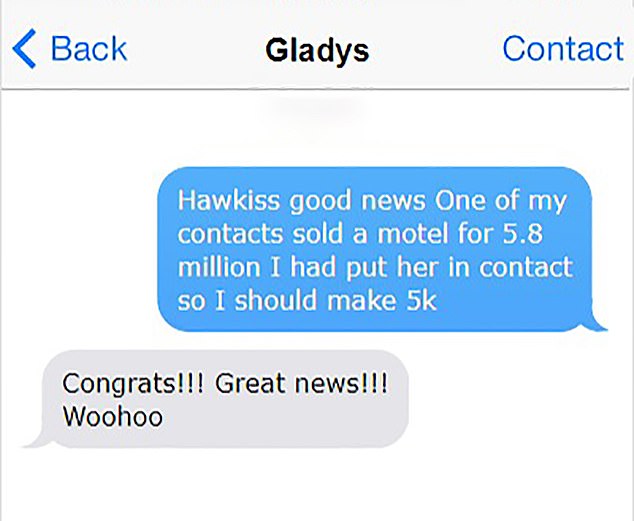 In a text message from 2014, before Ms Berejiklian became premier, Mr Maguire told her that he had brokered the sale of a motel for $5.8million and that he would get a $5,000 fee

In a text message from 2014, before Ms Berejiklian became premier, Mr Maguire told her that he had brokered the sale of a motel for $5.8million and that he would get a $5,000 fee.

‘Hawkiss good news. One of my contacts sold a motel for 5.8 million I had put her in contact so I should make 5k,’ he wrote.

Hawkiss, or hokis, is an Armenian term of affection meaning ‘my soul’ or ‘my beloved’.

MARCH 2015: Ms Berejiklian and Mr Maguire begin a ‘close personal relationship’ around the time of the NSW election. Ms Berejiklian was the transport minister while Mr Maguire, a parliamentary secretary, was separated from his ex-wife.

SEPTEMBER 7, 2017: Ms Berejiklian is heard in a telephone intercept saying she ‘didn’t need to know about that bit’ as Mr Maguire discusses his financial interests at Badgerys Creek Airport, and a land deal which would net him a large windfall. A day earlier, Mr Maguire texted Ms Berejiklian that ‘we clinched the land deal’.

NOVEMBER 2017: Louise Waterhouse, a western Sydney landowner, twice emailed Ms Berejiklian after being given her private address by Mr Maguire. She requested help with rezoning changes around Badgerys Creek Airport that would benefit a parcel of her land. Ms Berejiklian did not respond.

JULY 13, 2018: Mr Maguire appears before ICAC, with evidence heard that he sought payments to help broker deals for property developers.

AUGUST 3, 2018: Mr Maguire resigns from the Berejiklian government at the behest of Ms Berejiklian and other frontbenchers, with Ms Berejiklian saying she is ‘pleased’ and ‘relieved’ but privately she remains in contact with Mr Maguire.

SEPTEMBER 13, 2020: Ms Berejiklian cuts off all contact with Mr Maguire and agrees to support an ICAC inquiry into his business interests.

Officer reunited with elderly woman he rescued from floodwaters