A mother with four young children has been left devastated after her home dramatically collapsed into a sinkhole.

One mother-of-four, whose home has collapsed, said she has been forced to leave behind everything she owns.

The ordeal began on Wednesday night when a car was swallowed up by a hole that opened up in the middle of the road.

Residents did not know who the car belonged to, or what happened to the driver, but there were no reports of anyone injured. 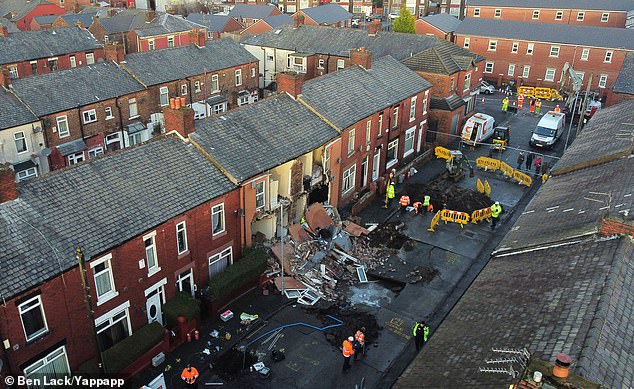 Pictured: Families have been left devastated after engineers discovered homes were severely damaged and two collapsed when sinkhole opened up in Abbey Hey, Greater Manchester 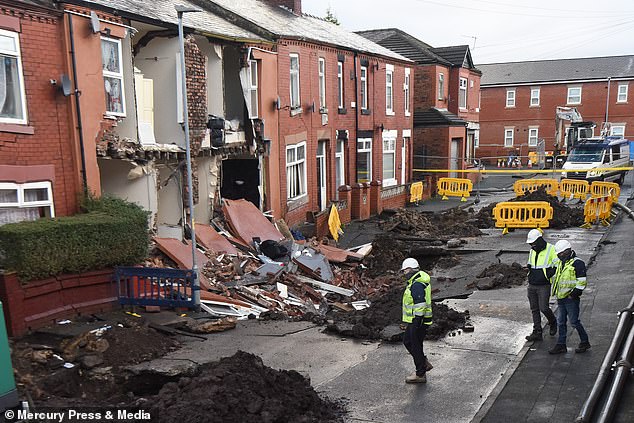 A mother-of-four, who lived in one of the collapsed homes, fears she has lost everything

Police and fire crews attended the scene before United Utilities engineers were called in to assess the problem.

The company initially said on Thursday afternoon they were dealing with a ‘collapsed sewer’.

However United Utilities now says ‘it is not known what caused the sinkhole’ and an investigation is ongoing.

Late on Wednesday evening, four families were evacuated from their homes after emergency services realised they had suffered serious structural damage.

Engineers remained at the scene throughout the night, but at around 11am on Thursday, the front of two houses collapsed as the sinkhole widened.

Horrifying footage showed the moment the exterior of the properties fell away, leaving the interior entirely exposed.

It is understood the two homes that collapsed belong to two young families with children.

A 26-year-old mother who lives in one of the properties now fears she has lost most of her possessions.

The mother-of-four said: ‘I’m hoping some things might be salvageable but it looks like the roof will collapse.

‘The upstairs looks like it’s going to come down as well – it’s got everything I own.’

The mother, who asked not to be named, has been put up in temporary accommodation and friends and family have rallied round to support her.

Engineers have been working at the scene since Wednesday evening

The woman added: ‘People are trying to donate things to help. We went out with my son’s pram and two bags of clothes for all of us.

‘The kids are a bit upset, my mum’s neighbour has donated a few toys. 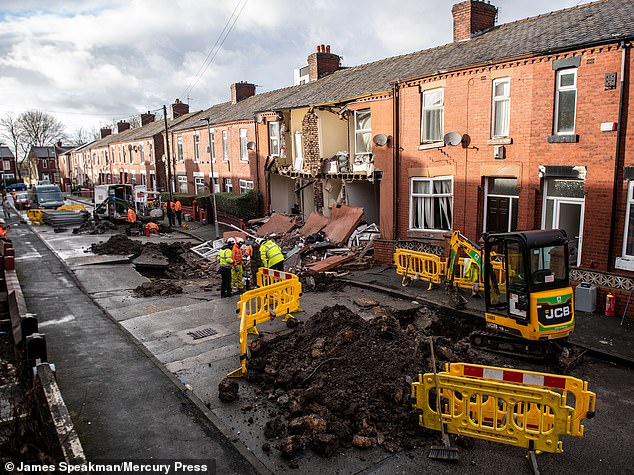 ‘I don’t understand how my house has come down. I’m just trying to get it to sink in.

‘When I saw the video I was just concerned thinking my kids could have been in there.’

Her neighbour, Bernie Scanlon, spoke of the moment her house started to collapse.

Bernie said: ‘I ran to the front window and they were like: ‘Get out, get out!’

‘I ran to my front door and couldn’t open it because it had obviously been affected by the collapse, so I ran through the back room.

‘I was going to throw a few bits in a bag but then my ceiling started to go – all the plaster started splitting off the walls and I could hear all these cracks.

‘It was scary. It was a split-second decision to leave. I thought: ‘If I don’t get out now, I’m not getting out’.

‘Within minutes, my house started to split, the masonry split, the walls separated from the window – it’s going to go.’ 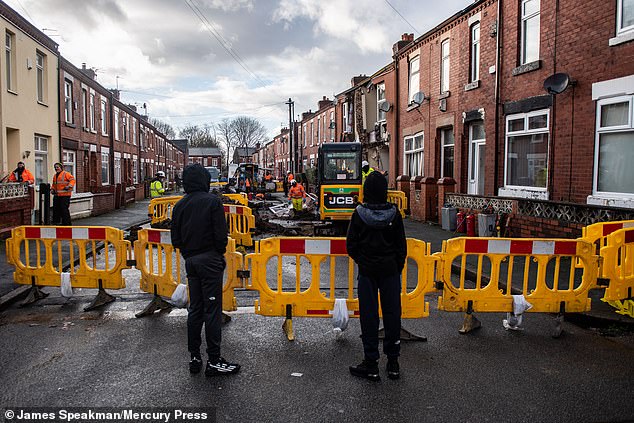 Houses on Walmer Street in Abbey Hey, Greater Manchester, have fallen into a giant sinkhole

Resident Declan O’Connor said he had been worried for the state of the houses for several hours before the shocking destruction began.

Declan said: ‘You could see all the walls were buckled. It did look like they were going to collapse.’

Other Walmer Street residents who were evacuated said they had no idea where they would be staying, or when they might return to their properties.

Barry Lock said: ‘There needs to be a full investigation as to why this happened.

‘I think it’s 50:50 whether my house will be condemned. Everything escalated very quickly.

‘I would like more communication. It’s crazy, I’m still in shock I think but we will make the best of it.’ 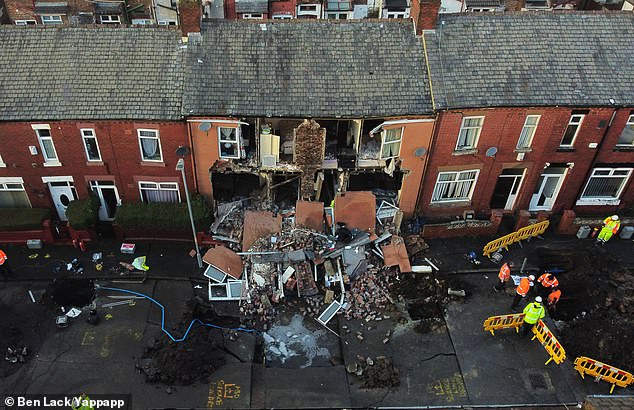 Louise Kennedy told how her elderly mother was at home on Walmer Street at the time the houses fell down.

Louise said: ‘She just heard this loud bang. They came out and the houses have just collapsed.

‘My mum’s owned that house for 40 years and we’re stood here waiting to see if it will collapse as well.’

Afzal Khan, Labour MP for Manchester Gorton, visited the scene yesterday and is calling for an urgent investigation into what caused the destruction

Mr Khan said: ‘The situation at Walmer Street is incredibly distressing, and my thoughts are with those whose properties have sustained damage or have been evacuated as a result of the sinkhole.

‘I am grateful for the quick response of the emergency services to the situation, and I am hugely relieved that no one has been hurt.

‘It is critical that we understand how and why this sewer collapsed, and if steps could have been taken to prevent the scale of damage we have seen. 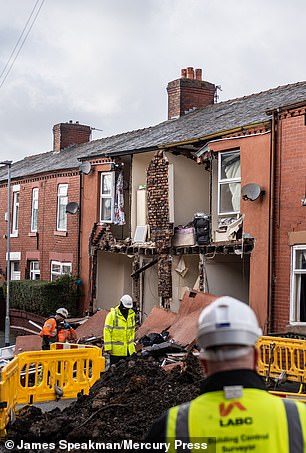 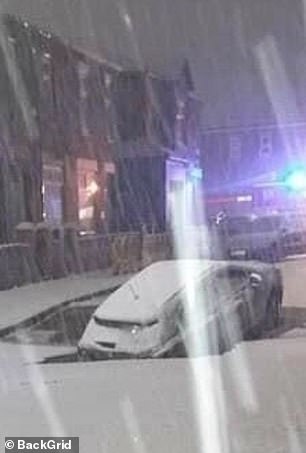 ‘United Utilities must do more to support residents in the area.’

Nikola, 26, lives at another of the badly damaged properties with her step-mother, Renata Chroma.

Nikola said the family, who have lived in the property for around five years, decided to evacuate in the early hours of this morning.

Nikola said: ‘We could see the car and we could hear the cracks in the road.

‘We were told stay in the back of the house but that was not an option so at about 2am we decided to leave.

‘We went to my auntie’s house because we could see the water was starting to come in. 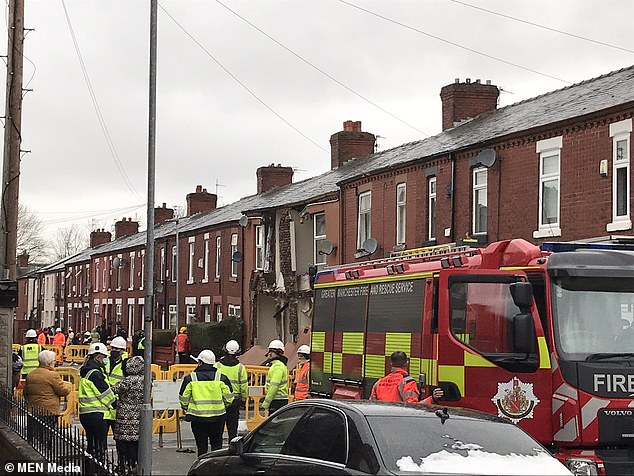 ‘We just grabbed our coats and shoes and went because we were scared.

‘We heard the men talking outside and it seemed that it was dangerous to stay there. The walls were cracking.

‘I had to go back today to get my passport and other stuff today. Renata and her children are staying with family until they can be rehoused.

‘We don’t know what’s going to happen next. I think they are going to find us another house. It’s not like it was our fault.

‘We are not the only ones affected. Other families have lost their houses too.’

Bernie said she also fears she’s lost most of her possessions if her house cannot be saved.

Bernie said: ‘We’ve lost everything, me and my son. If we can’t get back in to get a few bits, we’ve got nothing.’

Asked what she has lost, Bernie said: ‘Lots of memories in that house, all my photos, all my mum’s stuff.

‘I’m not bothered about clothes, TVs, they can be replaced. It’s the sentimental stuff. 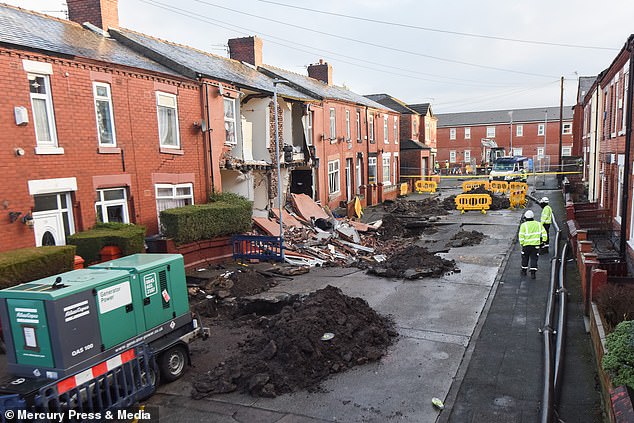 ‘It’s everything. All my personal things. It’s my life. I’ve literally run out of the house in what I’ve got on and my handbag.

‘It was my first home, I worked hard for that, I’ve been a single parent and I’ve slogged my guts out to pay that mortgage so I had something to leave the kids.’

A United Utilities spokesperson said: ‘Our engineers are on site at Walmer Street with emergency services and Manchester City Council dealing with a sinkhole and the associated damage.

‘The first priority is safety and the area had been evacuated so fortunately no-one was injured.

‘We are working with officers from Manchester City Council to ensure that anyone who needs to be evacuated has accommodation.

‘When it is safe for engineers to go back into the immediate area we will set up emergency drainage and water supply connections to restore services to the area and begin to assess how best to carry out repairs.

‘It is not known what caused the sinkhole but this will be investigated.’

Greater Manchester Fire and Rescue Service said: ‘Firefighters from Gorton station were soon at the scene and acted swiftly to erect a cordon around the hole, which measured approximately 10ft in diameter. 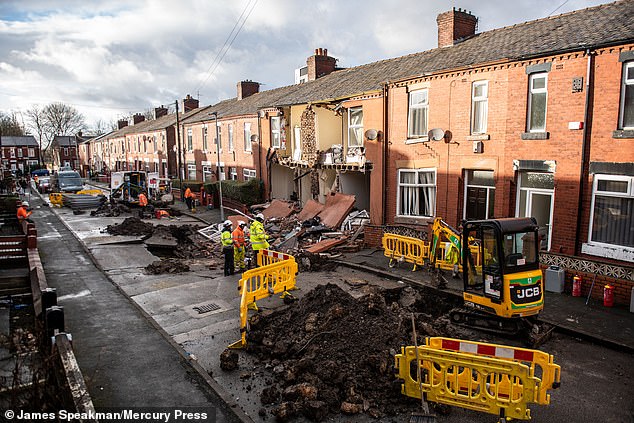 ‘Working with colleagues from Greater Manchester Police (GMP), Manchester City Council and United Utilities, several other vehicles were removed from the street. Residents from four nearby homes were evacuated as a precaution and accommodated locally.

‘Yesterday, GMFRS was called back to the scene at 11.10am following reports that two of the evacuated buildings had sustained partial collapse.

‘Upon arrival, a crew on the Technical Rescue Unit from Ashton station worked to keep members of the public from approaching the potentially dangerous structures.

‘Neighbouring residents were helped from their homes and firefighters remained at the scene until relieved by colleagues from building demolition. GMFRS was at Walmer Street until 2.30pm.’

Hyde station manager Andrew O’Brien, who attended the incident today, said: ‘I want to praise firefighters for their swift work in making the scene safe this lunchtime, and in doing so preventing a risk to local residents’ health and safety.

‘Crews also worked through the night at this scene, during the height of the stormy weather, and their hard work is testament to their professionalism.

‘The safety of the public was our primary concern overnight and again today, and I’m pleased to say no-one has suffered any injuries.’

Gynecologist performed hysterectomies on ‘everybody he saw’ at Georgia ICE center, nurse says