Between spending more time at home in lockdown and the current cold snap, many of us have the heating on almost constantly, but there is a way to boost the cosiness of your homew without running up a huge fuel bill.

Kyle James, who lives in Portsmouth, and shares DIY hacks on his TikTok and Instagram accounts, That Property Guy, has shown how to use foil in order to get more heat out of your radiators.

In a short video he showed how putting foil at the back of a radiator will help to reflect the heat back into the room, saying the hack works well on heating units fixed to exterior walls.

People were blown away by the quick trick, with many saying they had never heard of it. 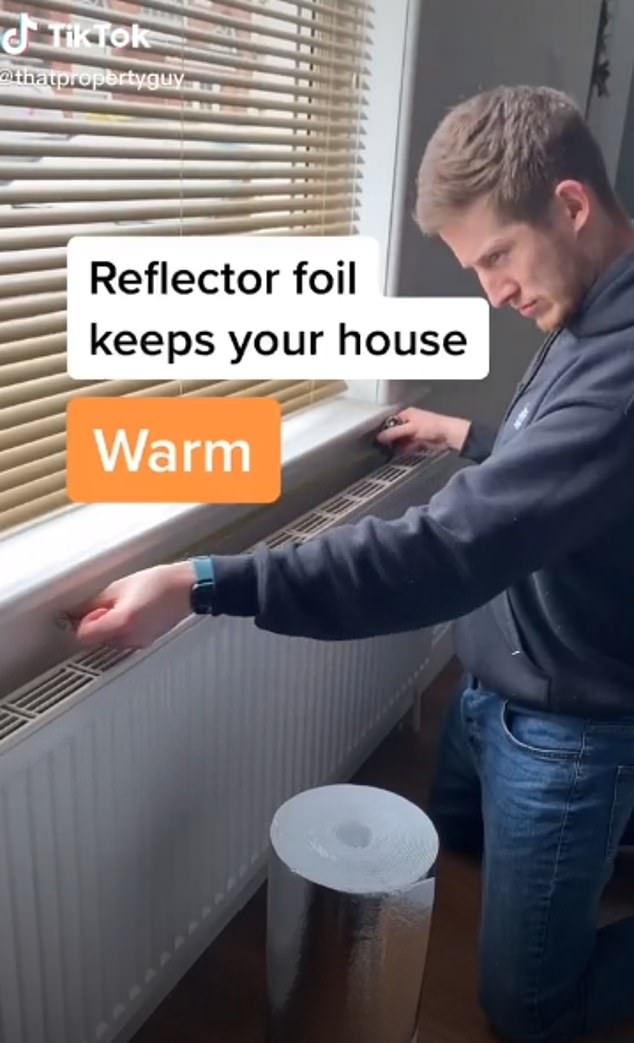 Kyle James, who shares DIY hacks on his TikTok account, That Property Guy, has shown how to use foil in order to pack more heat into your radiators. 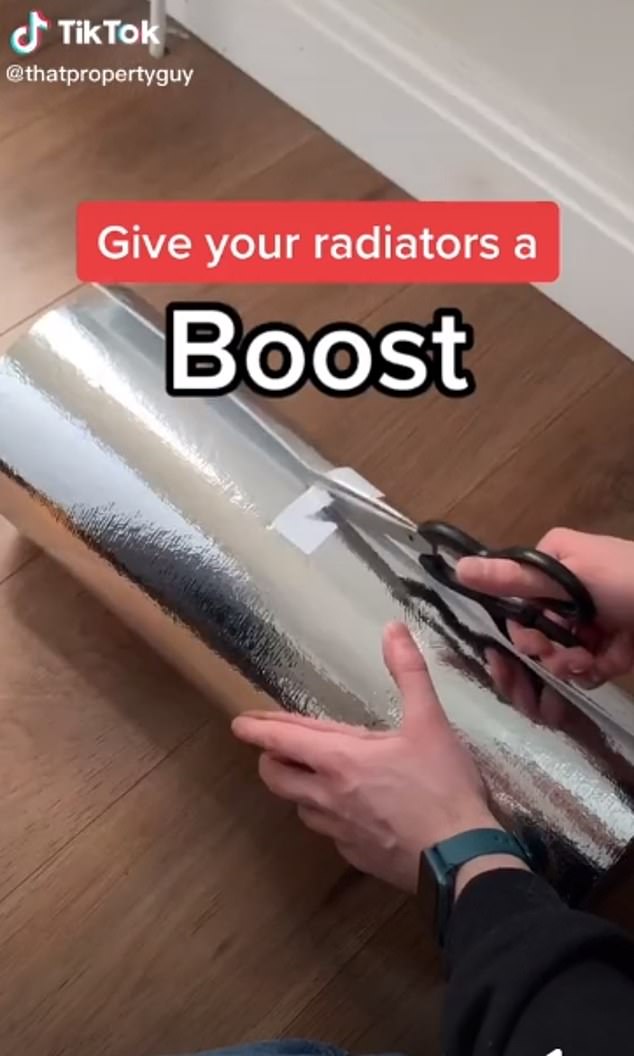 He explained tapping foil at the back of your radiator would reflect the heat back into your room (pictured: the foil used by Kyle)

‘Give your radiators a boost this winter. Radiator reflector foil is one way to keep your house warm,’ the DIY expert said on TikTok.

The clip showed Kyle cutting a sheet of foil from an industrial roll he’d purchased at B&Q for £11 and placing double-sided tape at its corner, before slotting it behind his radiator.

‘It reflects radiator heat back into the room. It’s really simple to install behind radiators,’ he explained.

‘It’s a good idea to do it on radiators on external walls,’ he added. 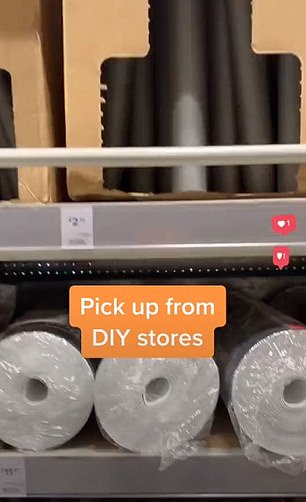 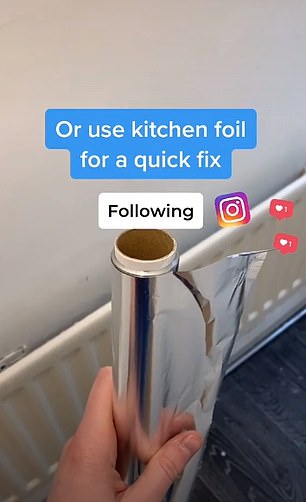 DIY-wiz Kyle explained the reflector foil could be picked up from DIY stores, left, but that kitchen foil could also do the trick, right 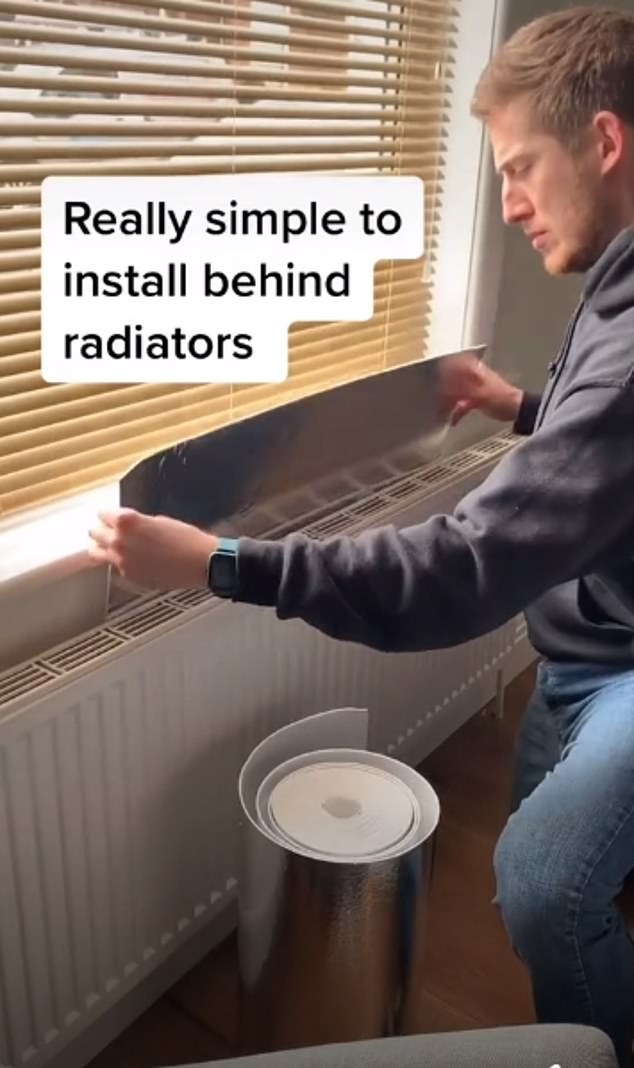 After putting the double-sided tape onto the foil, Kyle carefully tapped it to the back fot he radiator

The expert also said that the special reflector foil could be purchased from DIY stores such as B&Q.

But he also said that simply kitchen foil, which can be purchased for less than a pound at the supermarket, could also be a ‘quick hack,’ and would work in the same way.

‘Pick up foil from DIY stores, or kitchen foil is a quick fix,’ he said.

The video blew everyone away on TikTok, where it was liked more than 60,000 times.

‘Wow, never heard this before,’ one said.

‘Picked up from local Screwfix and fitted easy peasy and noticed a different very happy,’ said another.

‘Made such a difference for me,’ agreed another.

People were blown away by Kyle’s simple hack. Some who tried it said they were happy with the results 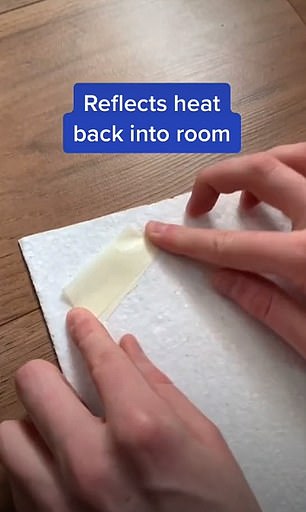 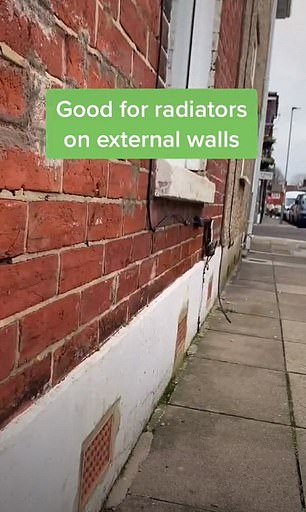 Kyle showed how to place the double-sided tape at the corner of the foil sheet, left, and said the hack would work well for radiators placed on external walls