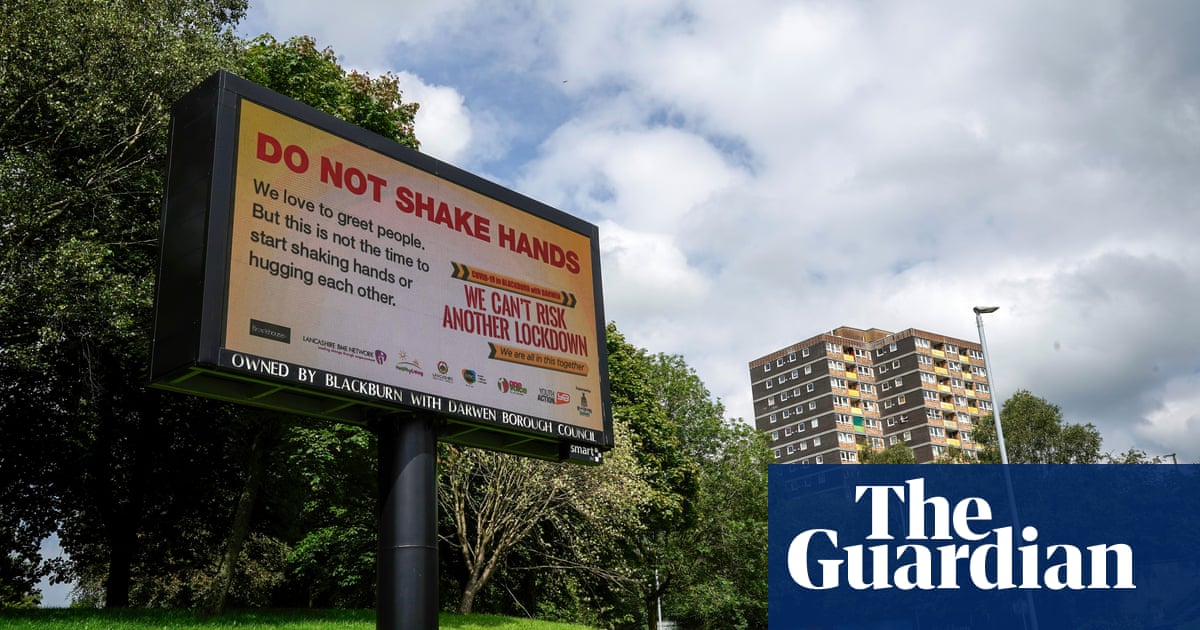 Councils with the highest Covid infection rates in England have launched their own contact-tracing operations to plug holes in the “world-beating” £10bn government system, with some reaching 98-100% of people who fell through the gaps.

Blackburn with Darwen council in Lancashire established its own model on Tuesday when its public health chief said national test and trace was “simply not tracing enough cases and contacts fast enough”.

Calderdale council in West Yorkshire, which has the sixth highest infection rate in England, told the Guardian it was hoping to launch its own team next week, while neighbouring Kirklees council said it was considering doing the same.

In total, local authorities in eight of the 10 worst-hit areas in England have launched or are planning to launch supplementary versions of the government’s flagship test-and-trace system amid concerns that it is failing to reach the most vulnerable residents.

Andy Burnham, the mayor of Greater Manchester, said local areas should be given more powers to track and trace. “I don’t know about elsewhere but it’s not a ‘world beating system’ in Greater Manchester. It is able to do really straightforward cases but the minute they get more complicated it struggles,” he said.

Burnham said that in more deprived areas people were not returning calls from contact tracers because they cannot afford to self-isolate, and did not want to hand over contacts for them also to be told to miss work.

He added: “The only way you can deal with these problems is a more local approach – door knocking and support for all employees to self-isolate. If anyone gets a request to isolate from test and trace, they should be able to do it immediately on full pay on the same principle as jury service.”

Under the national system, call handlers aim to make contact with all infected people and those they have come into contact with, to advise them to self-isolate. If they cannot make contact after 10 calls, they are advised to move on to the next case.

The government’s Scientific Advisory Group for Emergencies said the programme needs to reach at least 80% of people within 48 hours to be effective. The government says it is contacting 81% of Covid-positive people each week and reaching 75% of their contacts.

However, researchers said on Tuesday that only 50% of contacts were being traced, according to an analysis of government figures. The researchers, from UCL and the London School of Hygiene and Tropical Medicine, said the national system must improve significantly if schools were to safely reopen next month.

Tim Swift, leader of Calderdale council, said there was “two or three gaps” in the national system that it would plug with its own model, which it hopes to begin next Wednesday.

He said the national call centre-based approach was fine for some areas, but was failing to understand “something as basic as getting names right” in communities where full names do not always “fit neatly into a first-name-surname function”.

“We understand that and find it easier to handle,” he said. “You don’t want to just know someone is a private hire driver, but also where they work. And also you want to be able to follow up when people do not give full information and sometimes the only way to do that is to knock on a door.”

Ben Leaman, consultant in public health at Calderdale, said the council would use native speakers of Urdu, Czech and Slovak to knock on the doors of people the national system had been unable to reach. All positive cases would get a text message from the council with a local number to call –– a recognition of the fact many people were unwilling to call an 0300 number, often believing it to be a hoax. If they don’t reply within 24 hours they get a knock on the door.

It is understood that the government is looking to ramp up its support for the worst-hit areas in England, including by assigning ring-fenced groups of contact tracers and providing them with scripts supplemented with local information.

In Greater Manchester, which accounts for five of the 10 worst-hit areas in England, a large team of specialist contact tracers has been established to track down complex cases such as rough sleepers and asylum seekers. The region’s director of public health, Kate Ardern, said it had managed to reach 98-100% of the cases referred to the regional team.

A spokesman for the Greater Manchester Combined Authority said it was in discussions with Public Health England about establishing a similar operation to Blackburn, enabling it to contact people the national system had not been able to reach “of whom there are still too many”.

In Leicester, the first city in Britain to be placed in a local lockdown on 29 June, the council’s own test-and-trace system has contacted 122 of the 136 people referred to it by the national system, a success rate of 89%, a council spokesman said. “Our success rate locally shows that such work can be done far more effectively at a local level, by people who know the communities in which they are working, than by relying on it being done nationally,” he added.

Cumbria launched a local test and trace system at the end of May, when its director of public health, Colin Cox, was “deeply worried” that England’s lockdown restrictions were about to be relaxed without a national system in place.

Cox said its programme was “making connections between cases that the national system is not making” and he would be happy to take on all contact tracing for the region “if we had the resources”.

An example of the locally-driven approach, he said, was how they dealt with an outbreak in a pub. The national system would have simply told the infected person’s contacts to self-isolate, whereas local officials would contact the pub and try to reach all of its customers and issue a targeted local appeal.

A government spokesman said: “Our priority is to curb the spread of this virus and save lives, and local action to tackle outbreaks and keep people safe is a crucial part of the national NHS test and trace service.

“We continue to work closely with all local authorities and are providing targeted, additional support where needed, including in Blackburn with Darwen where we have assigned a ring-fenced group of NHS contact tracers to follow up positive cases.”

Dixons Carphone to get rid of 800 managers across UK stores

Gabriel to Arsenal latest: Mikel Arteta optimistic transfer will be completed but warns it's not done yet

Anti-China sentiment in US at ‘historic high’, Pew Research survey finds, amid friction over trade, coronavirus and human rights

‘You can’t do that’: Trump argues with reporter over Covid-19 death figures – video