Sheryl Sandberg has thanked her fiancé Tom Bernthal for helping her find love again after the death of her husband in an emotional open letter that she penned a year into their engagement.

In the tribute published in the March issue of Good Housekeeping, the Facebook COO, 50, opens up about the death of her husband Dave Goldberg in 2015 and her life-changing first date with Bernthal, a marketing CEO and father of three.

‘Dear Tom, A year has passed since we got engaged — one of the most transformative and fastest-flying years of my life,’ wrote Sandberg, who has two children of her own. 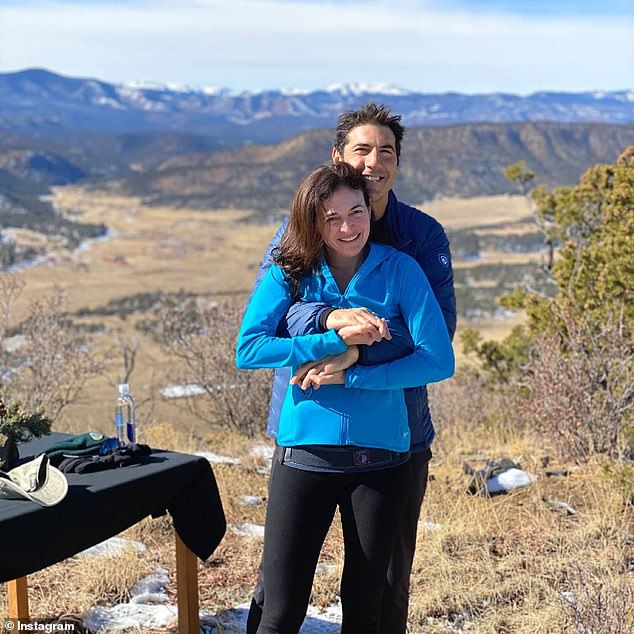 Gushing tribute: Sheryl Sandberg has published an open love letter to her fiancé Tom Bernthal (pictured), thanking him for helping her find love again after her husband’s death 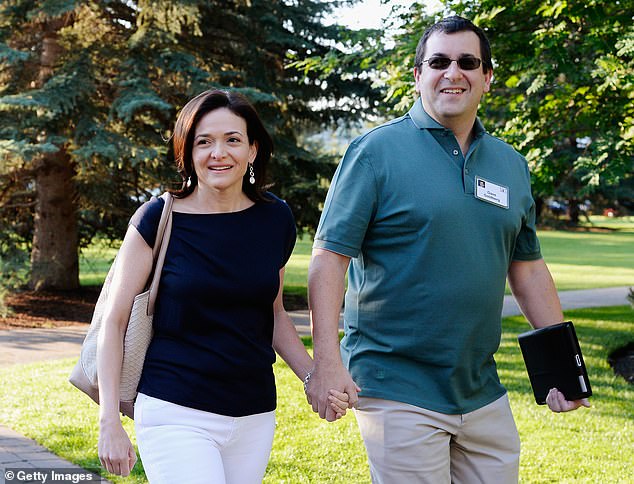 Traumatic loss: The Facebook COO’s husband Dave Goldberg (pictured in 2013) died suddenly at age 47 while they were on vacation in Mexico in 2015

‘I look at where we are today and how the seven of us have come together as a family during an incredibly difficult time for our country and world, and I can’t quite believe we did it.’

Sandberg explained that she and Bernthal were both pushed to their ‘breaking points’ before they fell in love. He was going through a divorce that had left him heartbroken, and she was grieving the sudden loss of her husband.

The Lean In author and her husband were vacationing in Mexico when he died at age 47. The businessman was working out on a treadmill when he fell. An autopsy later revealed that he had died of a coronary arrhythmia, a symptom of undiagnosed coronary artery disease.

‘I really wasn’t sure I could ever devote my heart to another person like that,’ Sandberg wrote in her letter to Bernthal. ‘When Dave died, I could barely imagine dating again, much less getting married.

‘I distinctly remember tucking the kids into bed and sitting by myself at the kitchen table where Dave and I once played countless games of Scrabble together,’ she continued. ‘I’d picture myself at that table, alone, for the rest of my life. It was a sad and frankly scary thought, but I knew it could end up being my fate.

‘And if it were, I’d count my many blessings and savor all the joy life sent my way — but I’d always be at least a little bit brokenhearted about continuing this journey alone.’ 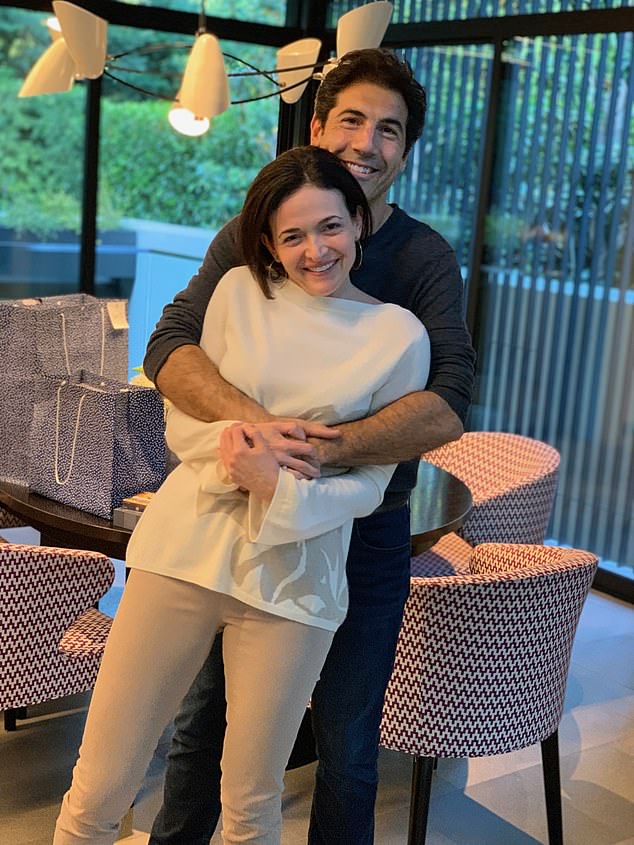 Finding love again: In the letter, Sandberg opened up about her grief and how she wasn’t sure if she’d ever be able to devote her heart to someone else again 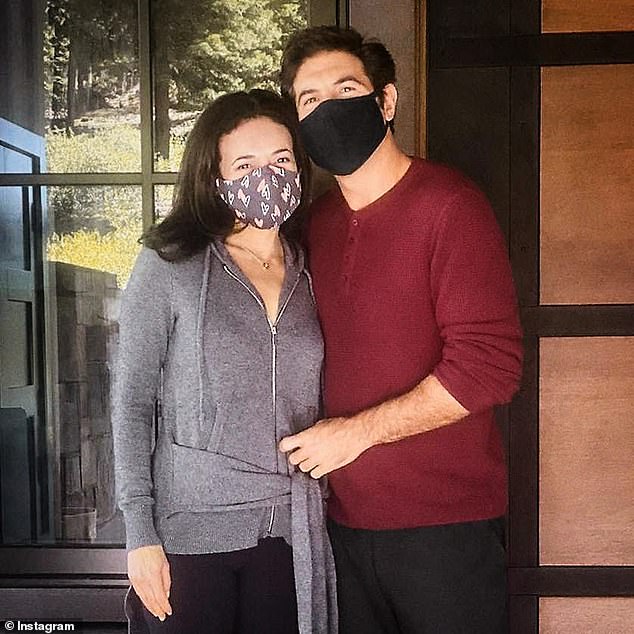 Look of love: It was Goldberg’s mother who insisted she would get married again, and it was his brother, Rob, who introduced her to his ‘good friend’ Bernthal

Sandberg wrote about her grief and overcoming adversity in her second book Option B, which she co-authored with psychologist Adam Grant.

She named the book after something her friend had told her two weeks after Goldberg had died. While crying that she wanted her husband, her friend explained that ‘Option A is not available,’ but promised to help her make the best of Option B.

The business executive told Good Housekeeping that it was Goldberg’s mom who insisted that she would find love again.

‘Dave’s mother said to me really early on, “You’re going to get married again, and I’m going to dance at your wedding,”‘ she recalled. ‘This was such a gift … because I think you need permission. Someone needs to say, “It is OK; it is not your fault.”‘

It was her late husband’s brother, Rob, who introduced her to Bernthal, telling her she had to meet his ‘good friend Tom.’

‘When I shook your hand for the first time, I had no clue that you would be the one to change my life,’ Sandberg wrote to her husband-to-be, recalling how he took her on a hike on their ‘first real date.’

‘You insisted on holding my water bottle the entire time. It was a small thing, but it really struck me,’ she said. ‘Whenever I retell this part of the story, you laugh and say, “What a low bar. I’m so glad I jumped over.”

‘But the truth is, I don’t think anyone had ever held my water bottle before for an entire hike. It felt like a metaphor: I didn’t need someone to pull me up the mountain, just someone to make the uphill trek a bit easier.’ 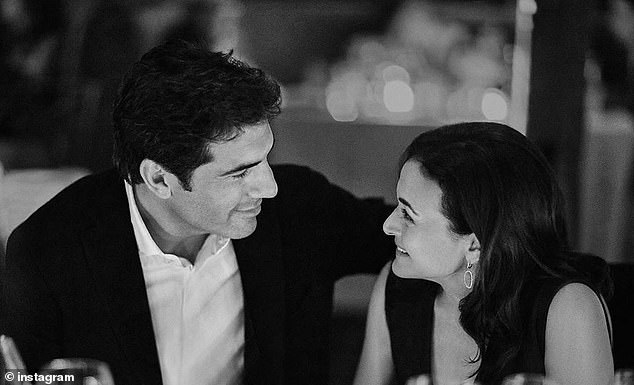 Wedding bells: After less than a year of dating, Bernthal proposed to Sandberg on February 1, 2020, after a hike that recreated their first date. They announced the news a few days later 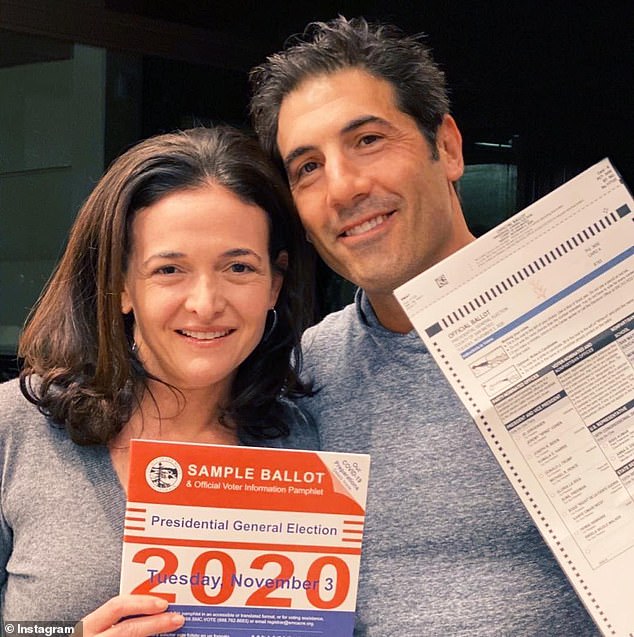 Perspective: Sandberg noted that their story ‘will never be Option A,’ but he has helped her ‘discover that Option B can also be filled with profound happiness’

Sandberg went on to gush about Bernthal’s ‘remarkable generosity’ and how ‘involved’ he is in their kids’ lives. She even joked that her son and daughter have him to thank for their ‘less-strict bedtimes.’

‘The truth is, I was just so tired before you, Tom,’ she admitted. ‘Tired of my chest pulling every time my little girl or boy would say “Dad and me.” Tired of making big parenting decisions alone. Tired of wondering if I’d ever find lifelong love again,’

‘But together, we have found a new path forward, one filled with so much gratitude and optimism.’

After less than a year of dating, Bernthal proposed to Sandberg on February 1, 2020, after a hike that recreated their first date.

The engagement ring he gave her is believed to have five diamonds, one for each of their five children.

‘Our story will never be Option A. When you got divorced and I lost Dave, Option A was taken off the table,’ Sandberg wrote at the end of her letter.

‘Every Father’s Day will be a little bittersweet in our house — but now, also filled with the happiness you’ve brought to my kids’ lives,’ she continued. ‘And there will likely always be grief in my heart for Dave. But you know that, and you understand and respect it, which makes me love you even more.

‘Thanks to you, I have come to discover that Option B can also be filled with profound happiness. There is so much joy to squeeze out of this new game plan. Thank you for helping me choose to see it.’