The Federal Bureau of Investigation and the Georgia law enforcement are investigating threats made against the state’s top election officials, Deputy Secretary of State Jordan Fuchs announced Sunday.

The probe comes as election workers across the country have complained that President Trump’s unfounded accusations of widespread voter fraud have been putting them at risk.

The FBI and the Georgia Bureau of Investigation’s joint probe is specifically targeted at threats made against Secretary of State Brad Raffensperger and members of his team, Forbes reported.

Fuchs declined to specify the exact nature of the threats. A Dailymail.com request for further comment has not yet been returned by Fuchs’ office. 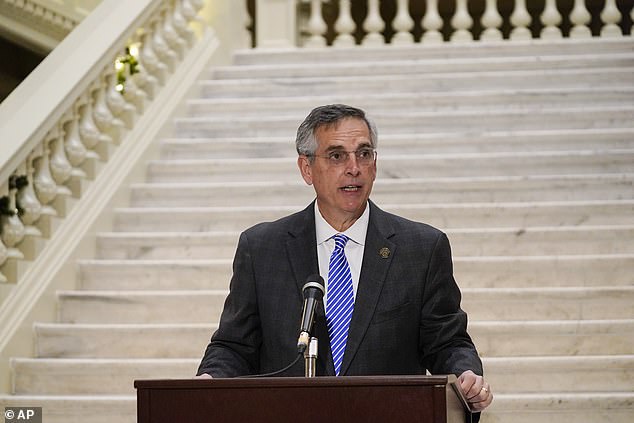 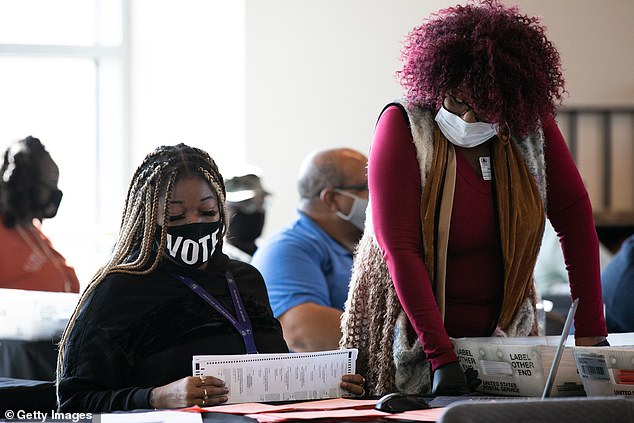 On Saturday, Georgia’s voting system manager Gabriel Sterling took to Twitter to reveal that he had been subjected to ‘multiple’ attempted email hacks, leading him to have a police security detail station outside of his home.

‘So this is fun,’ Sterling wrote. ‘multiple attempted hacks of my emails, police protection around my home, the threats. But all is well…following the law, following the process…doing our jobs.’

The President has repeatedly blasted the officials who oversee elections in Georgia, including Gov. Brian Kemp and fellow Republican Raffensperger on Twitter.

Trump claims both Kemp and Raffensperger have failed to uncover widespread voter fraud that he insists, without evidence, is responsible for turning the state blue for the first time since 1992.

Two of Georgia’s Republican Senators, Kelly Loeffler and David Perdue, have also piled on top of the president’s criticism, calling on Raffensperger to resign.

The Secretary of State, meanwhile, has continued to insist that Georgia’s vote tally was completely free of corruption, leading to both him and Gov. Kemp certifying Biden’s win in the state on Friday, following a week-long audit and by-hand recount. 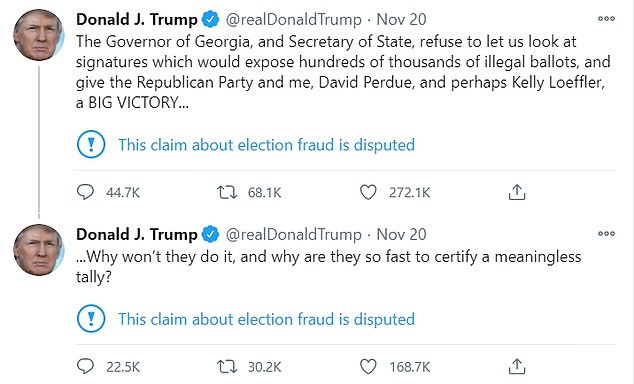 The President has repeatedly blasted the officials who oversee elections in Georgia, including Gov. Brian Kemp and fellow Republican Raffensperger on Twitter

In an op-ed published in the Washington Post on Saturday, Raffensperger said that Georgia’s voting system has ‘never been more secure or trustworthy’.

Raffensperger then added that, despite the state’s ‘gold standard in election integrity’, a number of ‘politicians and pundits have tried to mislead voters here and elsewhere about Georgia’s outcome.’

‘The truth is that the people of Georgia—and across the country—should not have any remaining doubts about who was elected governor two years ago or who won the presidential election earlier this month,’ he wrote.

‘The presidential outcome was remarkably close, but the new paper-ballot system, the strong election security and integrity mechanisms in place, and the audit and hand recount should combine to put to rest any doubts about the final outcome.’

As the state’s recount found that the margin between Trump and Biden was less than 0.5 percent, Trump has requested a second recount, which is expected to commence next week.

But Georgia’s election officials are not alone in reported threats against their safety as a result of Trump’s election fraud claims.

While a number of battleground states – including Michigan, Arizona and Nevada – were still tallying their votes earlier this month, local officials in each reported being ‘harassed’ and ‘threatened’ in light of Trump’s claims that Democrats were trying to ‘steal’ the election.

On Saturday, Georgia’s voting system manager Gabriel Sterling took to Twitter to reveal that he had been subjected to ‘multiple’ attempted email hacks and other threats

The harassment reportedly included a threatening phone calls, in addition to heated rallies outside of vote counting centers where Trump supporters called for the vote count to be stopped.

Arizona Secretary of State, Katie Hobbs, said last week that the president’s claims had prompted ‘ongoing and escalating’ threats against her family and her staff.

One user of the conservative social media platform Parler reportedly threatened to burn down Hobbs’ home and kill her family to ‘teach these fraudsters a lesson’.

Hobbs said her home address and her son’s cell phone number were also posted online and a group of people gathered around her home, chanting, ‘We are watching you.’

Police are said to be investigating the incidents.

Hobbs, meanwhile, has called the actions ‘utterly abhorrent, especially when directed at my family and staff.

‘They are a symptom of a deeper problem in our state and country—the consistent and systematic undermining of trust in each other and our democratic process.’

Similarly, Dana Nessel, the attorney general of Michigan, complained of ‘harassing’ and ‘threatening’ calls to her staff in a tweet earlier this month.

‘They are kind, hardworking public servants just doing their job,’ Nessel said in response to the calls. ‘Asking them to shove sharpies in uncomfortable places is never appropriate & is a sad commentary on the state of our nation.’

Reports of rough sleeping in UK rose sharply during lockdown

10 Republicans Voted to Impeach Trump. The Backlash Has Been Swift.

Willian Jose: Things to know about the Wolves frontman

Are pilotless planes the future for domestic flights?