There are some among the critics of Frank Lampard who accuse him of favouritism towards Mason Mount. They say that Mount is the teacher’s pet at Stamford Bridge.

They wring their hands when Mount appears in the starting line-up because they say he does not deserve his place. They are wrong, of course, and on Saturday, for the umpteenth time in his short career, Mount proved they were wrong.

Victory seemed to be slipping away from Chelsea at Craven Cottage against a Fulham team reduced to ten men before half time and the vultures were starting to circle around Lampard when Mount came to the rescue with a nerveless strike late in the second half that lifted his team back to seventh and the fringes of the Champions League places. 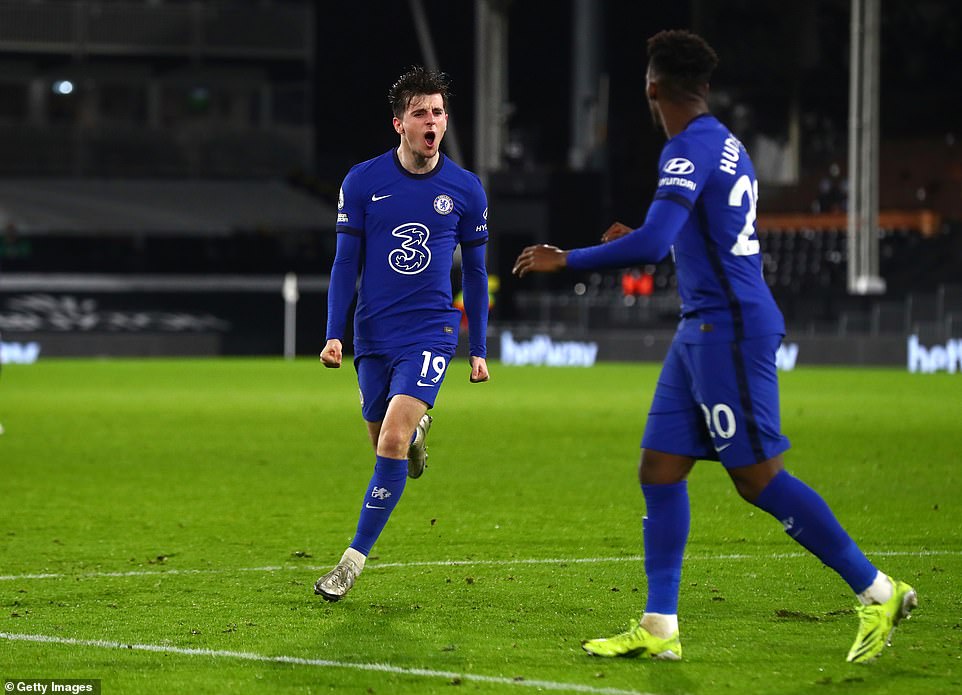 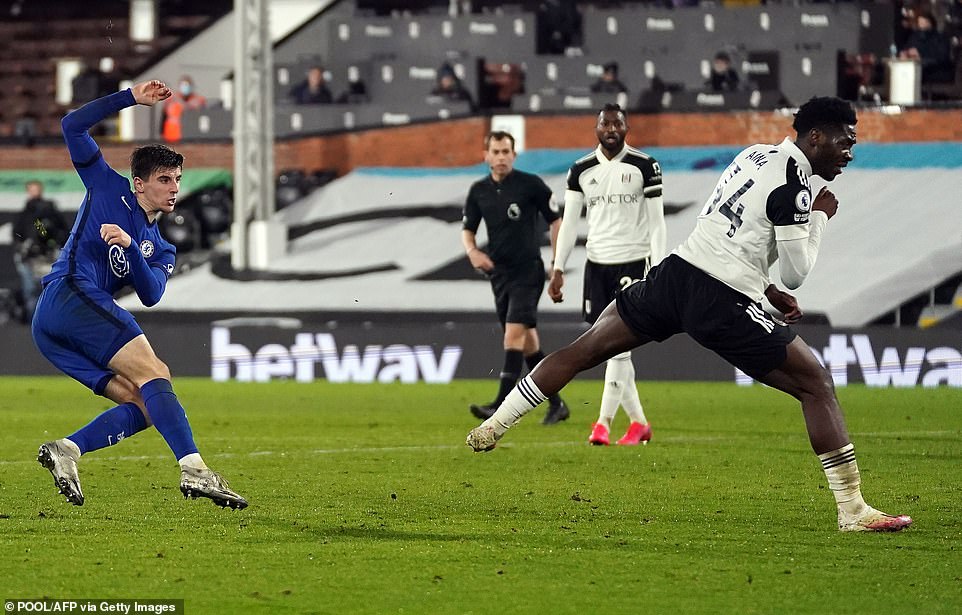 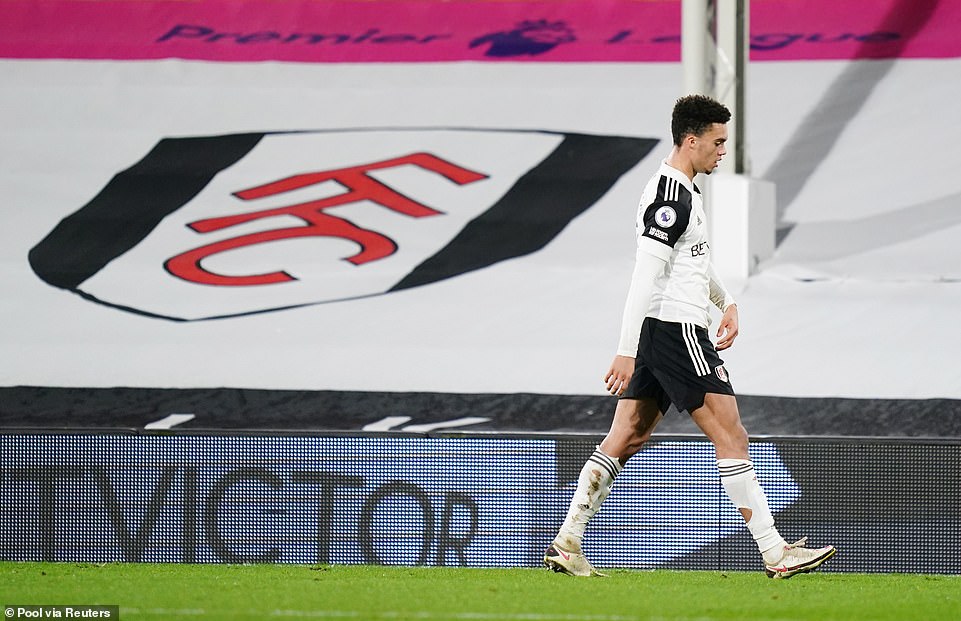 It was a reminder, if one was needed, of why Lampard values Mount. He seems to have been damned by association with the more exotic skills of Jack Grealish when the two compete for a midfield berth with England but he possesses plenty of class of his own and he delivered when his manager needed it most in this west London derby.

The victory will buy Lampard more time to find the right blend from the playing riches he has at his disposal although it was a sign of the problems he still faces in incorporating his summer signings when substitute Timo Werner, who has not scored in ten league games, wasted a glorious late chance to double Chelsea’s advantage. Werner’s confidence is shot to pieces.

The defeat brought Fulham’s run of five successive draws to an end and meant they have now won only one of their last 39 matches against Chelsea. It was a setback for Fulham boss Scott Parker after his side’s fine performance against Spurs last Wednesday but there were more promising signs that they will put up a spirited fight against the prospect of relegation.

After four losses in their previous six games, Chelsea had started the game in tenth place and looked tentative in the opening stages. Olivier Giroud forced a good save out of Alphonse Areola with a flamboyant shot hit with the outside of his left foot that swerved towards the bottom corner of the Fulham net before the goalkeeper tipped it around the post. 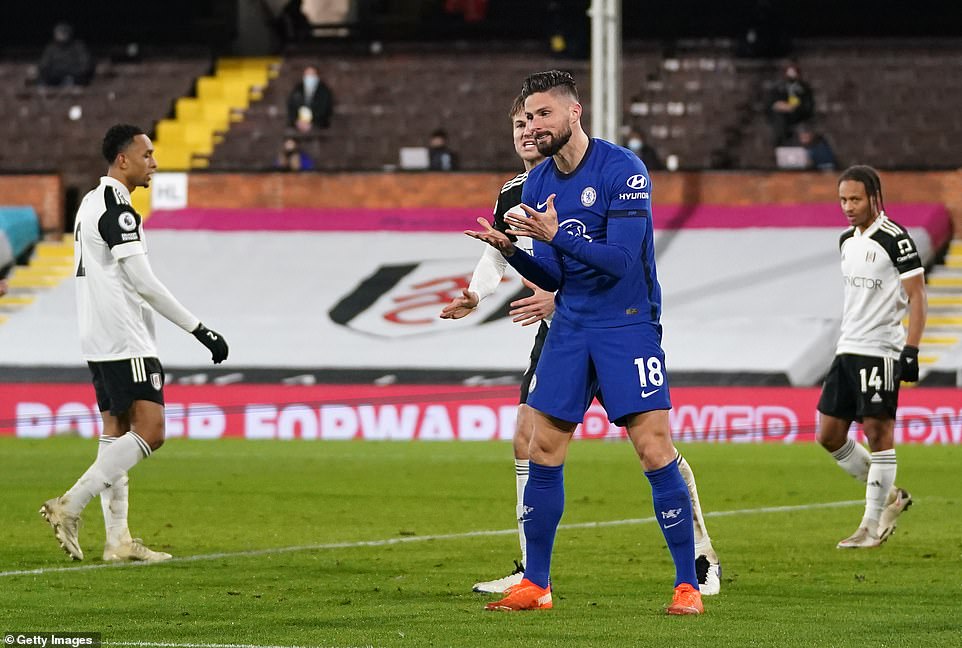 The Blues were frustrated as Fulham held firm despite their one-man disadvantage, as Chelsea still looked out-of-form 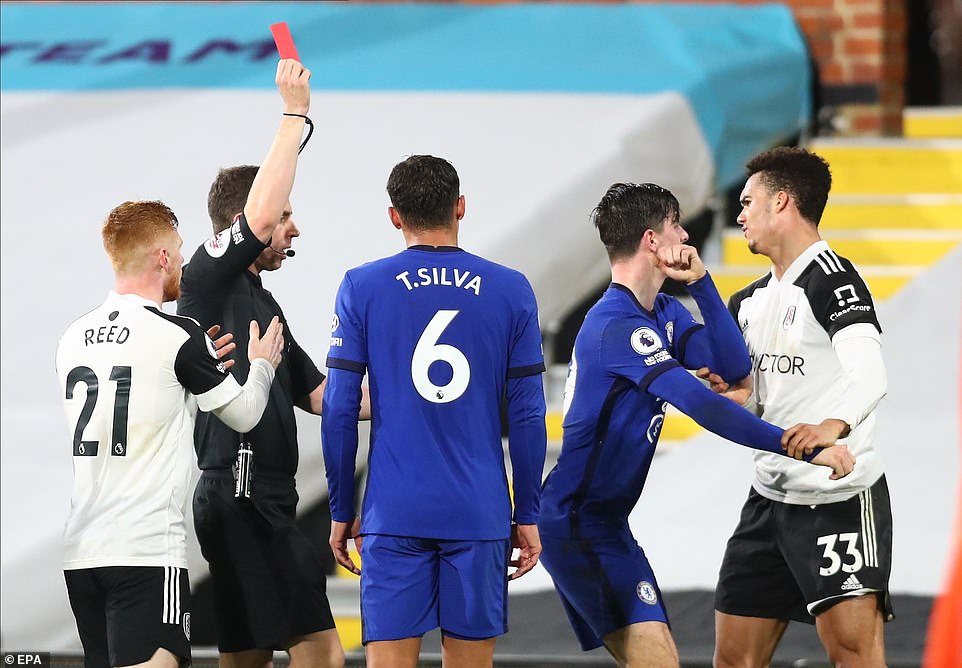 But Fulham had not lost the composure they showed against Spurs and as the half wore on, they attacked more confidently. Antonee Robinson made ground down the left and both he and Lookman saw shots blocked in quick succession. Ivan Cavaleiro, Fulham’s goalscorer at Tottenham, was also thwarted by a late clearance.

Midway through the half, Chelsea came close to breaking the deadlock. Robinson could only nod a weak header from a Ben Chilwell cross into the path of Mason Mount on the edge of the Fulham box and Mount took one touch to control it before smashing his shot against the face of the bar. His yell of despair drifted across the River Thames to Putney.

Fulham should have taken the lead four minutes before half time when Lookman backheeled the ball into the path of Robinson near the halfway line and Robinson advanced on the Chelsea defence.

Robinson played in Kenny Tete on the right and his cut back found Cavaleiro unmarked eight yards out. Cavaleiro hit it with his right foot but miscued it so badly that it hit his left leg and trickled apologetically into touch.

Tete turned away and held his head in his hands but worse was to come for the home side. On the stroke of half time, deep in Chelsea’s half, Robinson flew into a tackle with Cesar Azpilicueta who flew through the air before landing in a heap. 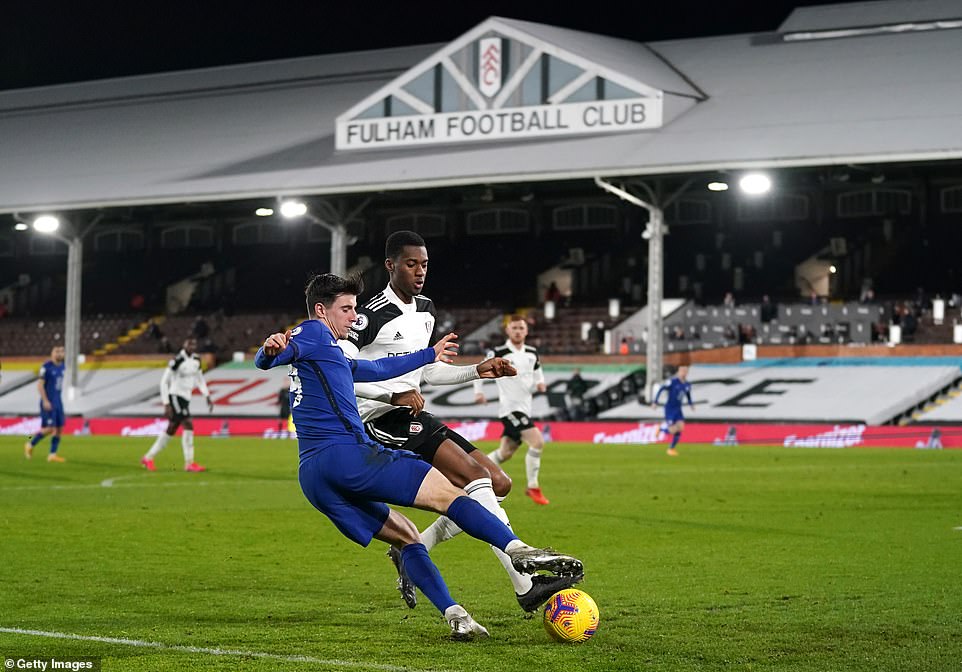 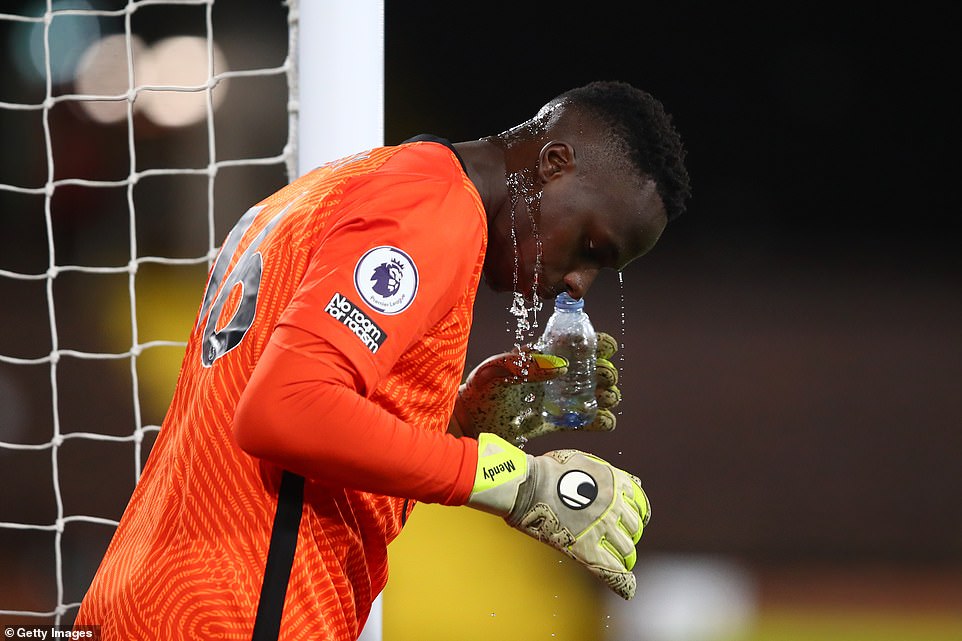 Edouard Mendy kept a clean-sheet but still endured a couple of shaky moments, with one particular second-half mix-up 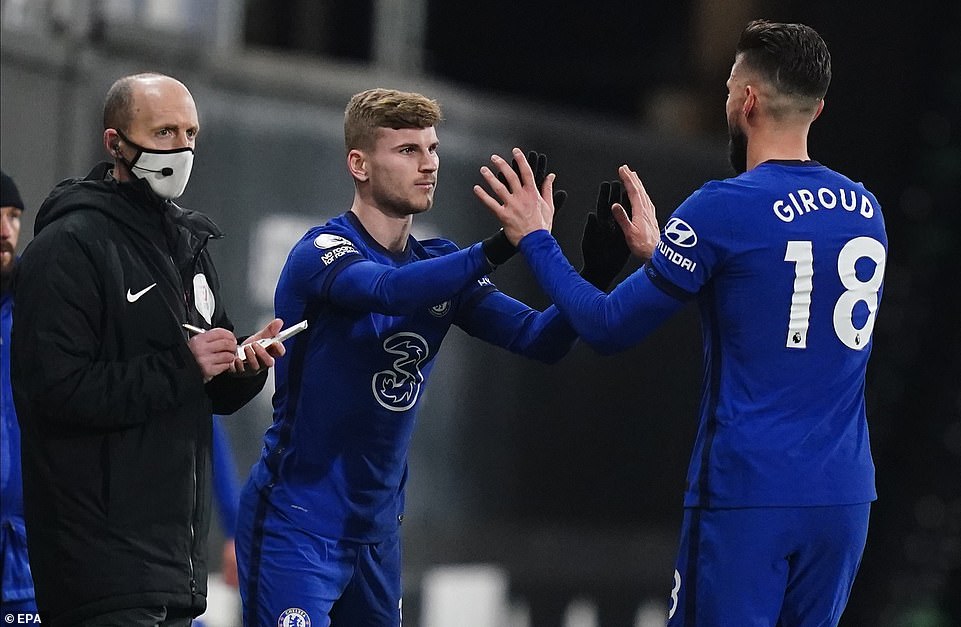 Timo Werner came on as a late sub and again had chances thanks to his blistering pace, but his confidence is still missing

Quite how much contact there was appeared to be in doubt but VAR did not overturn the decision. The odds were stacked high against Fulham now. Robinson had been their best attacking outlet and just as his side had started to grow in confidence and show real intent, they had been emasculated by the dismissal.

Chelsea were still lacking creativity, though, and for all the pressure they started to exert through their numerical advantage, it was still Fulham who forced the first chance of the second half. Cavaleiro held the ball up well and fed Ola Aina as he burst forward. Aina cut inside on to his right foot and let fly with a fierce right foot drive from just outside the area that flew over the Chelsea bar.

Chelsea were dominating possession completely now but their build-up play was predictable and laboured. There were too many square passes and not nearly enough urgency when they trying to move the ball forwards. 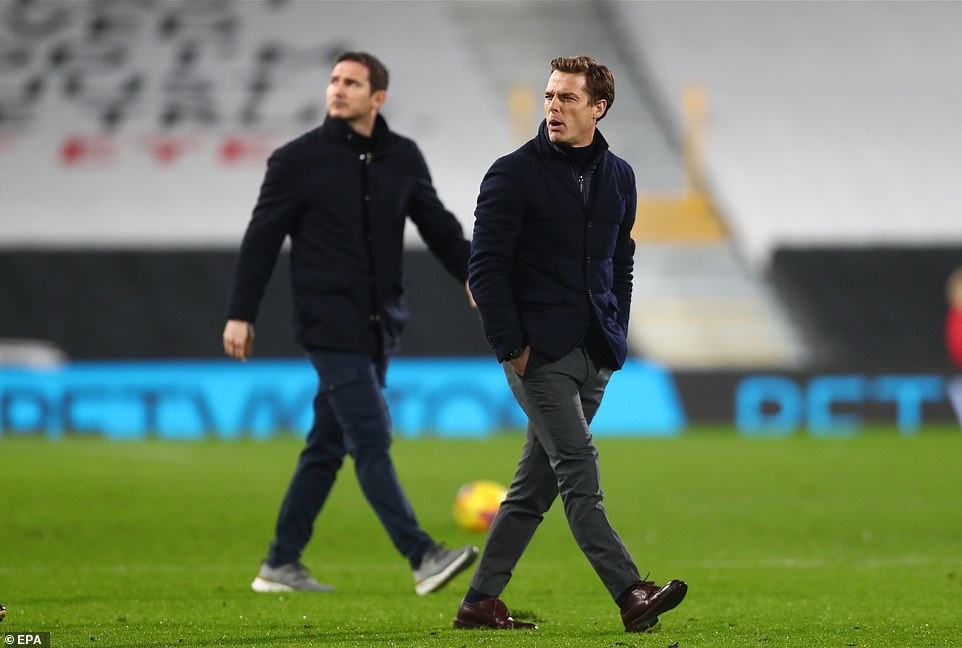 Scott Parker’s side are fast-improving and pushing to leave the drop-zone, but it was a much-needed win for Frank Lampard 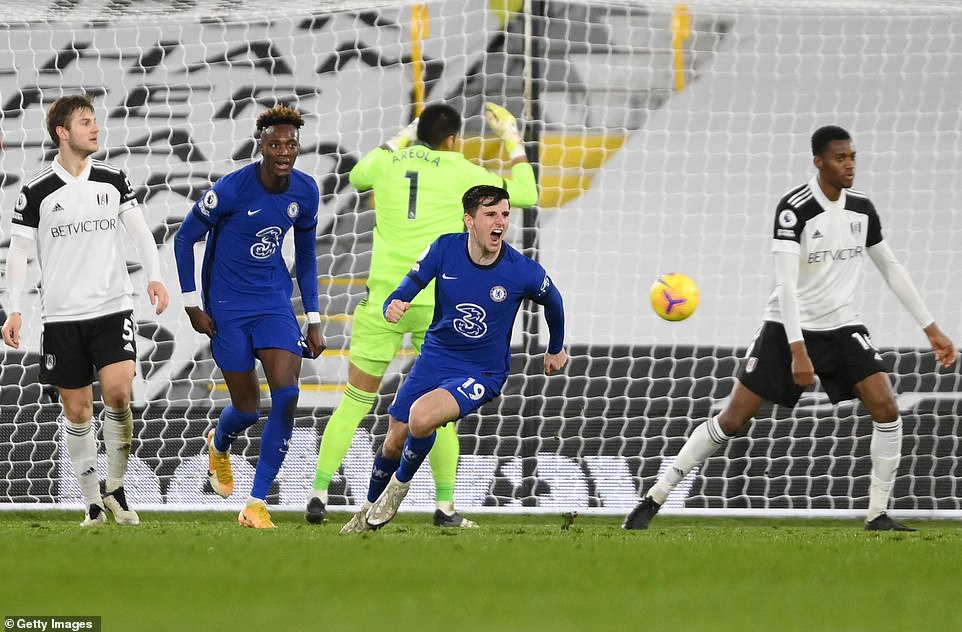 Not before time, Lampard substituted Jorginho with 25 minutes to go and brought on Tammy Abraham. Abraham’s first touch was to head a cross from Antonio Rudiger straight at Areola. He should have scored.

Chelsea nearly gifted Fulham a goal out of nothing. Edouard Mendy was caught off guard by a backpass from Azpilicueta and played the ball straight into the path of Cavaleiro. Cavaleiro turned and tried to chip the ball into the empty goal but it was blocked by the body of Thiago Silva and hacked away to safety.

An air of desperation began to enter into Chelsea’s play. They brought on Timo Werner for Giroud and with 12 minutes to go, they finally made the breakthrough.

Chilwell picked up a loose ball on the edge of the Fulham box and instead of shooting, he took the ball wide and crossed it. Areola flapped at it and his parry sent it to Mount, who drilled it straight back past him.