A Republican member of Congress on Thursday was prevented from bringing a gun onto the floor of the House of Representatives after new security measures were instituted after the MAGA riot on January 6.

House Rep. Andy Harris, a Republican from Maryland, set off the metal detectors near the entrance to the House chamber.

When a Capitol Police officer scanned Harris with a metal detector wand, it beeped, indicating that Harris was carrying a gun that was concealed by his suit coat.

Police refused to allow Harris to enter and the officer indicated to a nearby security agent that the congressman was armed, according to the Huffington Post. 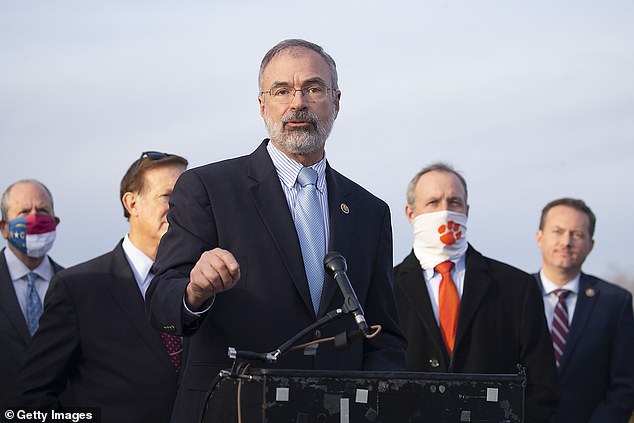 House Rep. Andy Harris, a Republican from Maryland, set off the metal detectors near the entrance to the House chamber as he tried to bring a gun onto the floor on Thursday. He is seen above on December 3 in Washington, DC 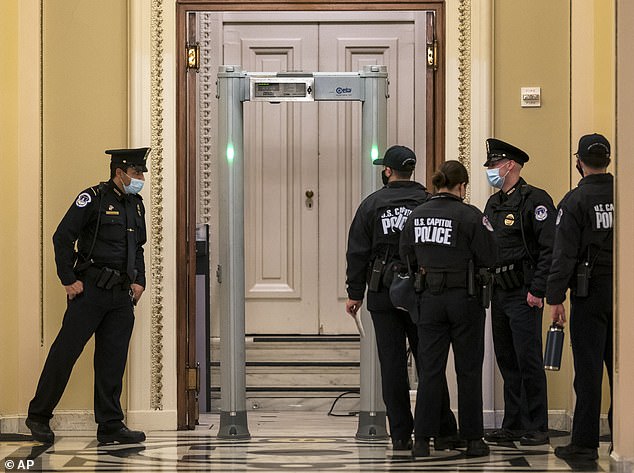 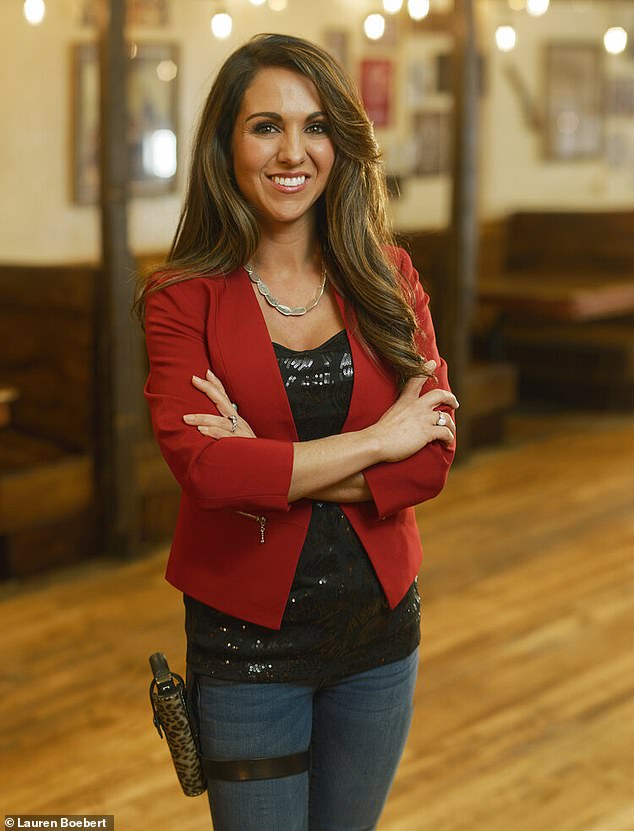 Rep. Lauren Boebert, who has bragged about her desire to carry her Glock pistol into the Capitol, got into a standoff with Capitol Police on January 12 and wouldn’t let them search her bag after she set off the security alarm on Tuesday night before she entered the House floor

Harris then tried to get a House colleague, Rep. John Katko, a Republican from New York, to take the gun from him so that he could get to the floor in time to vote.

But Katko told Harris that he didn’t have a license and refused to hold the weapon for him.

Harris was reportedly heard complaining to other members of Congress that his staff failed to remind him about the screenings.

He then left the area by taking nearby elevators. A few minutes later, he returned to the House chamber.

While walking through security, he placed his cell phone and keys on a desk to the side. This time, the metal detectors were not activated. 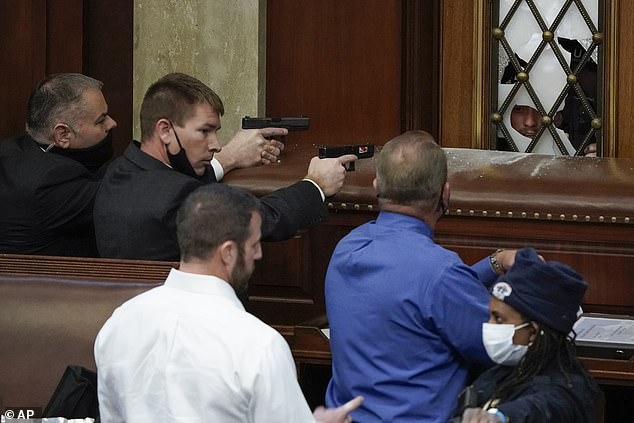 The new security measures were put in place after supporters of then-President Donald Trump stormed the Capitol. The image above shows Capitol Police with guns drawn watching as rioters try to break into the House chambers on January 6

Harris was allowed to enter the floor of the House, where he and other members voted on granting a waiver that would let retired Army General Lloyd Austin serve as President Joe Biden’s defense secretary.

It is legal for members of the House to carry a gun in office buildings, in the Capitol, and on Capitol grounds.

But they are not permitted to bring guns onto the House floor.

Firearms that are brought into the Capitol cannot be loaded as bullets must be carried separately.

They were instituted days after the January 6 riot on Capitol Hill that left five people dead and a trail of destruction through the building, including smashed windows, torn papers, and broken furniture.

‘Effective immediately, all persons, including Members, are required undergo security screening when entering the House Chamber,’ acting House Sergeant at Arms Timothy Blodgett wrote in a memo to lawmakers obtained by DailyMail.com.

Lawmakers returned to the House on January 12 to take part in their first votes since the MAGA riots.

On that day, most members went through metal detectors, but several Republican lawmakers, including Harris, sidestepped them or refused to allow officers to scan them after setting off the metal detectors.

Rep. Lauren Boebert, who has bragged about her desire to carry her Glock pistol into the Capitol, got into a standoff with police and wouldn’t let them search her bag after she set off the security alarm.

Boebert, who supports QAnon theories and made a name for herself carrying her firearm on the campaign trail, walked through the screening process with her bag, which set off the magnetometer.

She refused to hand the bag over to be searched.

Capitol Police eventually let her in the House chamber and it appears her bag was not searched before they did so.

‘I am legally permitted to carry my firearm in Washington, D.C. and within the Capitol complex,’ Boebert tweeted after the incident. 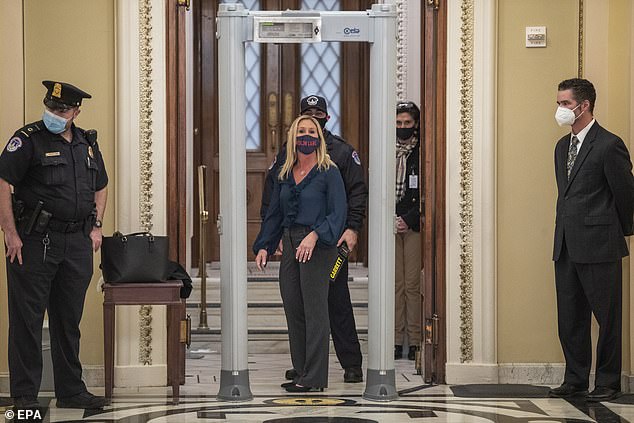 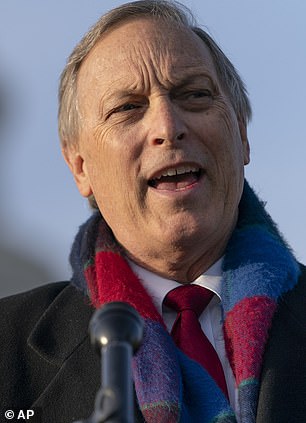 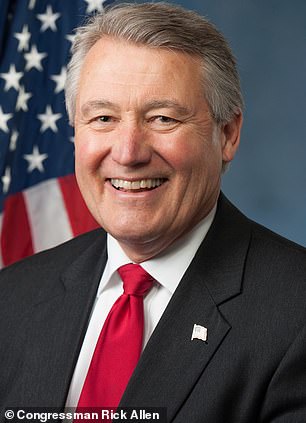 According to Huffington Post, three Republican lawmakers – Andy Biggs of Arizona (left); Rick Allen of Georgia (right); and Boebert – refused to be scanned after they set off the magnetometers on Thursday

‘Metal detectors outside of the House would not have stopped the violence we saw last week – it’s just another political stunt by Speaker Pelosi.’

Congresswoman Debbie Lasko tweeted: ‘For members of Congress to enter the floor of the U.S. House, we now have to go through intense security measures, on top of the security we already go through. These new provisions include searches and being wanded like criminals. We now live in Pelosi’s communist America!’

In response, Capitol Police put desks and velvet ropes on the sides of the metal detectors that would prevent members from walking around the machines.

House Speaker Nancy Pelosi said she would fine members who bypass the screenings $5,000 for their first offense and $10,000 for their second infraction.

The fines are not yet being enforced since they have not been adopted by the House.

According to Huffington Post, three Republican lawmakers – Andy Biggs of Arizona; Rick Allen of Georgia; and Boebert – refused to be scanned after they set off the magnetometers on Thursday.

A spokesperson for the Capitol Police told Huffington Post that ‘USCP is investigating this matter.’

When asked if USCP was aware that Harris tried to bring a gun onto the House floor, the spokesperson declined to comment citing an ongoing investigation.

Harris, the only Republican lawmaker in Maryland’s 8-person congressional delegation in the House, is a strong supporter of former President Donald Trump.

He supported Trump’s claims of rampant voter fraud in the November 3 presidential election even though state and federal courts said there was no merit to the allegations.

Covid-19 vaccine second doses may be scheduled ‘up to 6 weeks’ later, CDC says

Contactless payment limit will rise from £45 to £100