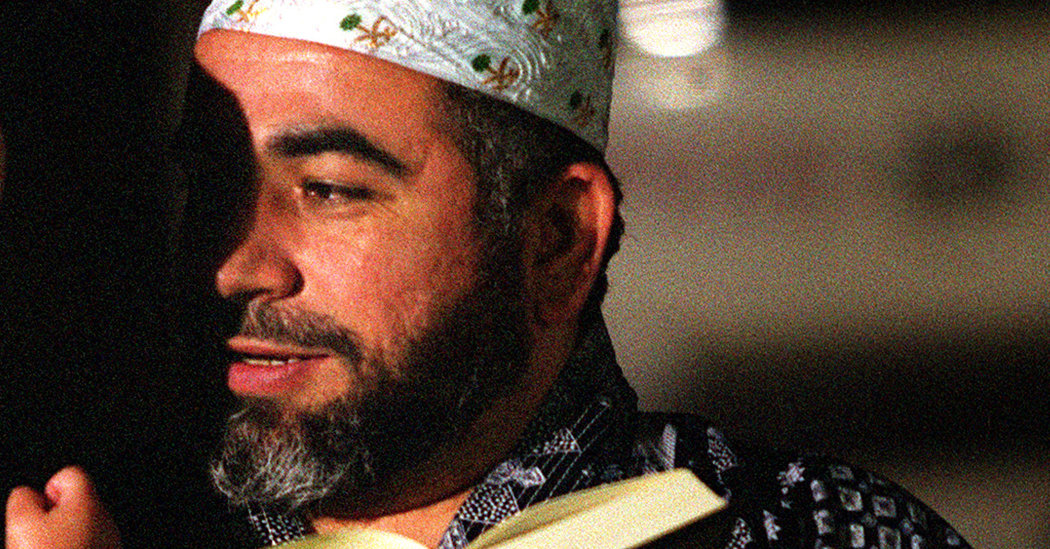 This article was produced in partnership with the Pulitzer Center on Crisis Reporting.

WASHINGTON — The Justice Department moved to block the release of a Palestinian man from immigration custody on Thursday in a continuing legal fight over the government’s power to indefinitely detain a noncitizen who was convicted of a terrorism-related offense.

The case centers on Adham A. Hassoun, who was convicted of providing material support for terrorism in 2007 for sending aid to Muslim militants in conflicts in places like Bosnia, Kosovo and Chechnya in the 1990s. Mr. Hassoun, 58, completed a prison sentence early for good behavior in 2017.

But his immigration status presented the government with a legal issue. Although he has lived in Florida, he was not a United States citizen and he was also stateless, having been born in Lebanon but not holding citizenship there, either. So deportation, the normal course of action in the case of a noncitizen who has completed a sentence on terrorism charges in the United States, was not an option.

Not wanting to free him in the United States, the Justice Department put him in an immigration prison in 2017 after he completed his sentence on the terrorism charges.

But a federal judge in Rochester, N.Y., Elizabeth A. Wolford, ruled Monday that the Trump administration had provided no proof that he was dangerous and ordered him to be released on Thursday to family members in Florida under supervision like other convicts who completed their sentence.

Rather than let him go, however, Justice Department lawyers notified two different federal appeals courts of their intent to challenge Judge Wolford’s release order — the Courts of Appeals in the Second Circuit in New York and in the District of Columbia Circuit.

Justice Department lawyers were given a deadline of July 15 to provide written arguments on why Mr. Hassoun should not go free while they appeal Judge Wolford’s authority to release him. Mr. Hassoun’s lawyers agreed to the brief delay to his release to file briefs in both courts responding to the government’s effort to halt his release pending appeal.

The government claims that the Department of Homeland Security has unchecked administrative authority to invoke a government regulation established under the Patriot Act, and indefinitely imprison a noncitizen who is considered a danger to national security.

Mr. Hassoun came to the United States in 1989, and lived in Florida before his capture in 2002 for overstaying a student visa. With no place to send him, the Trump administration invoked the Patriot Act authority and has been holding him at the Buffalo Federal Detention Facility in Batavia, N.Y.

Justice Department lawyers for a time intended to justify Mr. Hassoun’s continued detention with testimony from a jailhouse informant who had described Mr. Hassoun as having made statements supporting radical causes. When the informant’s accounts were discredited, the government instead returned to its core argument that a court was obliged to defer to an administrative finding by the government that someone is a danger.

But Judge Wolford noted in her 43-page decision on Monday that the government “has conceded” it could not demonstrate to the court “clear and convincing evidence or even by a preponderance of the evidence” that Mr. Hassoun “would threaten the national security of the United States or the safety of the community or any person.”

She ordered six months of supervised release at the home of his sister, with an ankle monitor and other restrictions, including not associating with known terrorists or extremists.

In a filing on Wednesday to halt the release, the Justice Department said the F.B.I. had furnished a memo in June declaring it had assessed Mr. Hassoun as threat, and that was sufficient to justify his continued detention. It added that “release will profoundly burden the law enforcement agencies tasked with monitoring” him.

Civil liberties lawyers had argued that his continued detention was an abuse of executive power and that government lawyers had withheld information that would have helped Mr. Hassoun’s case for release. They also argued that federal judges do have authority to review evidence justifying detention, just like in the cases of Guantánamo prisoners who seek review of their indefinite detention through petitions of habeas corpus.

“He should not stay in prison a day longer,” said Jonathan Hafetz, a senior counsel at the American Civil Liberties Union and Mr. Hassoun’s lawyer. “The government is wildly incorrect that it has unreviewable authority to lock him up for the rest of his life based on executive say-so, and staying his release would be a manifest injustice.”

Brothers, aged 20 and 21, drown after being pulled underwater by a current in Delaware

Trump Stress-Tested the Election System, and the Cracks Showed