When Covid-19 and the lockdown struck, a two-acre stretch of a field on Barnwell Road just outside the centre of Cambridge, the most unequal city in the UK, was just bare soil.

But thanks to 110 volunteers and donated fencing to prevent rabbits from nibbling on the crops, an organic market garden was created to help stock seven local community food hubs with an abundance of tomatoes, pumpkins, broccoli, aubergine and much more by the end of July. 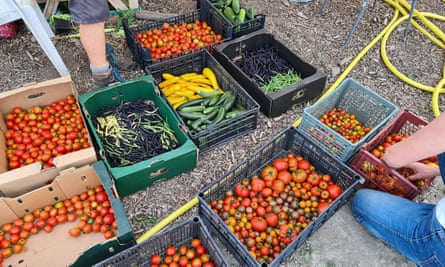 Volunteers sort through the harvest, in preparation for donating it to local community food hubs in August. Photograph: CoFarm Cambridge/Guardian Community

“We don’t agree you should have to pay a premium to have food that is delicious and nutritious,” said CoFarm Cambridge founder Gavin Shelton, who is aiming to establish a community farm in every local authority in the UK by 2030, using his own money, local donations and corporate grants.

“Something has gone seriously wrong in society if people cannot afford this food. We’ve focused on growing as much organic food as we can and for this year giving it all away free.”

There is no doubt, he added, that the impact of coronavirus brought the fragility of global supply supply chains into sharper focus, but Shelton believes there is now an unprecedented opportunity to address both public health and the climate crisis in tandem.

“We can improve our health by eating fresh organically grown local food that doesn’t include any chemicals, pesticides or nasties, while addressing the combined health, climate and biodiversity emergencies in the process.”

At the beginning of this year, the homeless charity Crisis warned that families on benefits in Cambridge may have to cut back on food to cover their rent, and some vulnerable people are known to have fallen even further into food poverty as lockdown affected incomes. 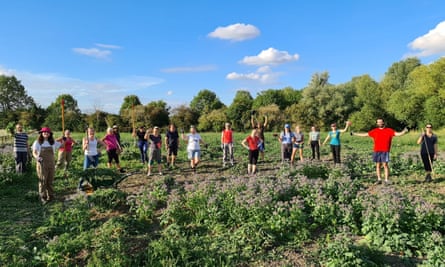 Shelton said the project, on the last sliver of greenbelt land in the city of Cambridge, which is leased from a church under a “farm business tenancy”, sought to both address food poverty and bring people together to reduce social isolation and improve mental health and wellbeing. “We were the first place some people had been besides their corner shop when they began volunteering during lockdown,” he said.

Across the UK, a number of other local food growing initiatives have sprung up and expanded during lockdown, amid concern about supermarket shortages, to help provide healthy food to vulnerable people. As many as one in 10 in England, Wales and Northern Ireland were forced to use food banks during lockdown, as some government food packages for the most vulnerable were lambasted for offering food of low nutritional value.

In Northumberland the week following lockdown, Ginnie O’Farrell, a school tutor who was left with no work after public exams were cancelled, launched Hexham Fresh Food Bank – a network of volunteer growers coordinated through a Facebook group – after being inspired by gardeners in a nearby village growing extra crops which are sold at a volunteer-run shop, with the funds raised reinvested in the community.

“Many people in Tynedale have allotments or gardens producing fruit and veg and they often have a surplus which they’re now passing on to us to be distributed to households in need of support,” she said.

“We started by donating produce to people straight from the ground, but now we’re producing jams, pies, crumbles, salad bags and herbs in upcycled tin cans. We’ve had such lovely comments from the food bank. People have been touched that strangers went to the effort of cooking for them.” 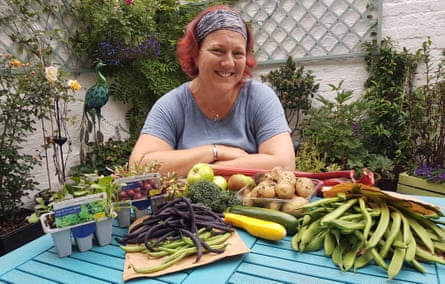 Ginnie O’Farrell with her homegrown produce, the surplus of which she donates to the fresh food bank. Photograph: Hexham Fresh Food Bank/Guardian Community

A network of up to 200 food growers has been established and is providing free produce to some 280 households in the west Northumberland area, with fears that the end of the furlough scheme and further unemployment could cause demand to rise yet further.

“I hate the fact food banks exist, its shameful in a developed country, but I feel if they have to exist we should make sure people get some decent food out of it,” O’Farrell added. “Nobody should have to mainly eat tinned food because they cannot access good produce.” 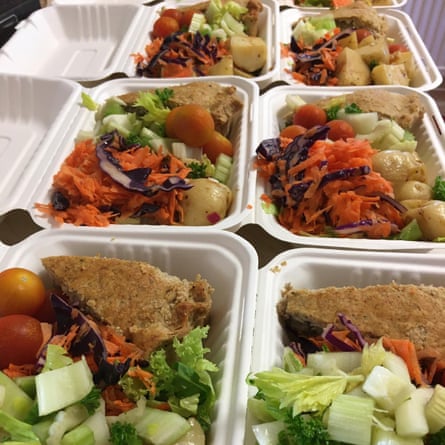 Lunch boxes that have been prepared at Solhaven using the organic farm produce. Photograph: Solhaven/Guardian Community

In Northamptonshire, a community permaculture farm set up in 2018 by a couple who have both experienced homelessness began delivering meals prepared with their own beetroot, broccoli, kale, pak choi, spinach, tomatoes, cucumbers, courgettes and butternut squash to dozens of homeless people in hotels under the banner the Loving Chef.

“One of our friends runs a local Covid support group which has grown to about 3,000 people who either couldn’t go out to get food or needed donations,” said co-founder Sammuel Yisrael.

“We’ve also been helping them to deliver to key workers, people in safe houses due to domestic abuse, people with learning-disabilities and older people unable to leave home”

Of his mission at Solhaven, which is partly funded by the National Lottery, government’s Covid-19 support fund and profits from the events space, he said: “Our aim is to connect homeless and vulnerable adults together with mother earth to improve people’s mental and physical wellbeing, while also giving something back to nature.”

The project is continuing to distribute vegan snack boxes packed with produce from the community farm to rough sleepers in and around Northampton, with growing visible homelessness on the East Midlands town’s streets, according to Yisrael. 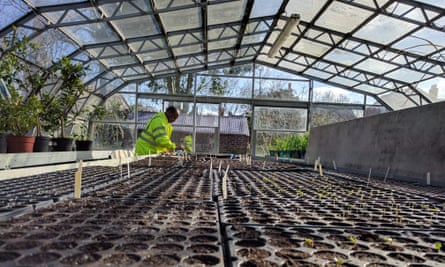 At Myatt’s Fields park in Lambeth, south London, staff and volunteers came together in response to Covid-19 and grew approximately 40,000 cavolo nero, spinach, pumpkins, lettuce, tomatoes and bean seedlings in a greenhouse and handed them out to a wide variety of households for free at the height of lockdown.

“Since then we’ve been growing and handing out seedlings; working with people on estates and other parks to grow food in community spaces, in estates, on roadsides and in back gardens thanks to funding from City Bridge Trust,” said Tori Sherwin, the development manager at the park.

“Hundreds of people in our area are growing for themselves, for their neighbours in need and for community emergency food projects. We also worked with Incredible Edible Lambeth, which distributed seeds, compost and pots to 170 new growers throughout the borough over lockdown.” 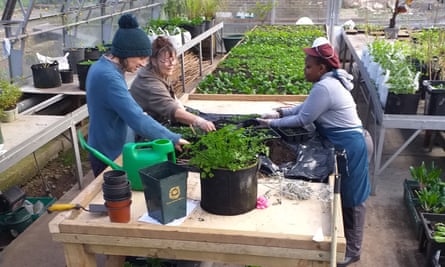 Sherwin said she witnessed a renaissance of interest in people growing their own produce during the lockdown as some feared they may not be able to depend on commercial food systems and demand for growing spaces soared.

“The idea of needing to rely on yourself for food has hit people for the first time,” she added. “Plus, it’s often extremely cheap, and with a bit of help everyone can grow quite a lot of delicious food.”

Naturists make an exhibition of themselves at Paris film library