He knew everyone worth knowing and had a witticism for them all. Of Princess Margaret, he once remarked, ‘She’s a very high-strung girl who wants to be royalty on one hand and on the other a hippy.’

Mick Jagger he described as moving ‘like a parody between a majorette girl and Fred Astaire’.

Even Elizabeth Taylor, whom he got to know well and had profiled for a magazine, describing her eyes as ‘so liquid with life’, was defined as having ‘an extraordinary inferiority complex, and it’s difficult to get through’.

But then Truman Capote was not for nothing hailed as one of the sharpest writers of the 20th Century.

His 1958 novella, Breakfast At Tiffany’s, was adapted into the Oscar-winning movie starring Audrey Hepburn (though he hated her in the role), while his 1966 true-crime novel, In Cold Blood, is to this day regarded as one of the greatest examples of the genre. 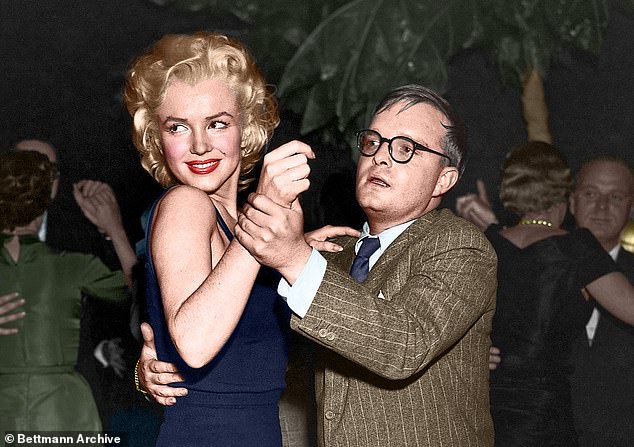 Truman Capote is pictured above with Marilyn Monroe. Though Truman had lobbied for his friend Marilyn Monroe to play Holly in Breakfast At Tiffany’s, Paramount had, he said, ‘double-crossed me in every conceivable way and cast Audrey [who] was just wrong for that part’

Even writer Norman Mailer, a contemporary who was not without ego himself, was forced to admit, ‘He wrote the best sentences of anyone in our generation’.

Now, a new documentary, The Capote Tapes uncovers the man behind the razor-sharp words and reveals a life far more intriguing than those he captured in print.

Abandoned by his mother when a small boy and despite a turbulent upbringing, he always knew he wanted to be a writer and ‘be rich and famous’, and he achieved both aims after the publication of In Cold Blood.

It gave him increased cachet in New York high society where he had a coterie of female friends — his ‘Swans’ — who included Jackie Kennedy’s sister, Lee Radziwill, and Gloria Guinness, who had married into Britain’s famous banking family. Yet those same friends would ultimately prove his undoing.

As soon as he published a chapter from his long-awaited novel, Answered Prayers, where he not-so-subtly divulged all the scandalous secrets they had told him over the years, he was ostracized.

Much of the late 1970s was spent in drug rehab clinics and in famed New York nightclub Studio 54, where he partied with the likes of Debbie Harry, Jerry Hall and Andy Warhol. He died in 1984, a month before his 60th birthday, having been shunned to the end by the very people he had once lauded. 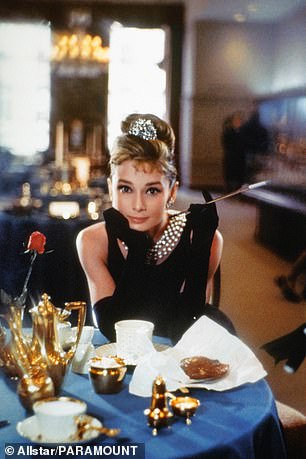 More than their money and style, he had been fascinated by the socialites’ stories and their ability to reinvent themselves from often humble beginnings — a talent he himself possessed to a high degree.

Born Truman Streckfus Persons, he was four when his parents divorced and was sent to live with his mother’s relatives in Monroeville, Alabama — a period that made him feel like ‘a spiritual orphan’. His best friend at the time was the little girl next door, Harper Lee, who went on to write Pulitzer Prize-winning novel, To Kill A Mockingbird, even basing her strange yet intensely smart character Dill Harris on the young Truman.

By the time he was eight, his mother Nina had married second husband, businessman Joe Capote, and Truman was eventually brought to New York to be with them.

Beautiful, yet an unapologetic social climber, according to the documentary, Nina ‘made a splash as a hostess’ in New York, even living on Park Avenue for a time until in 1952, her husband was accused of embezzlement and the family was forced to move out. Unable to face her reduced circumstances, she committed suicide two years later — Truman was 29.

His relationship with his mother and her abandonment of him affected him deeply all his life. His most famous work, Breakfast At Tiffany’s, was thought to have been inspired in part by Nina.

Holly was, as he wrote, ‘an American geisha’ who had no job, but accompanied well-to-do men to the best restaurants and nightclubs, ‘with the understanding that her escort was obligated to give her some sort of gift, perhaps jewellery or a cheque … if she felt like it, she might take her escort home for the night.’

As writer and friend Jay McInerney points out in the documentary, ‘I think there’s a lot of Truman’s own mother in Holly Golightly. Truman’s mother was, like Holly, from a small Southern town. She was also a bit of a courtesan.’

Like Holly, Nina had left a husband she’d married as a teenager and abandoned family members she loved in pursuit of wealth and glamour. Though Truman had lobbied for his friend Marilyn Monroe to play Holly in the film, Paramount had, he said, ‘double-crossed me in every conceivable way and cast Audrey [who] was just wrong for that part.’

The film nonetheless was a huge success, securing Audrey Hepburn an Oscar nomination in 1962.

In the meantime, Truman had started work on In Cold Blood — that consumed six years of his life and was set a world away from New York society.

It centred on the real-life murder of four members of the Clutter family — wealthy Kansas farming folk slain by raiders in 1959. Accompanied by Harper Lee, he travelled to Kansas where they conducted countless interviews with the shell-shocked residents and investigators, amassing 8,000 pages of notes.

That they all took him into their confidence says much about Truman’s inherent charm and his ability to prise a story out of even reluctant subjects. Openly gay, at a time when it wasn’t widely accepted, and with his distinctive high-pitched, lisping Southern drawl, he walked into the community of Bible-belt farmers and according to a friend, ‘managed to seduce that whole town’.

He also conducted extensive interviews with the killers — Richard Hickock and Perry Smith — forming a particularly close bond with the latter. After witnessing their eventual execution by hanging in 1965, Truman was so distraught he pulled his car over to the side of the road and cried for two hours. ‘He was really in love with Perry,’ explained a friend, socialite Nancy ‘Slim’ Keith.

The book had its detractors, with some claiming that certain facts and dialogue were changed to suit Truman’s narrative (‘Don’t let the truth get in the way of a good story’ was his oft-repeated mantra), but it turned him into a literary star.

The year it was published, he held what later became the legendary Black and White Ball at New York’s Plaza Hotel for 500 of his ‘very closest friends’. They included the Duke of Windsor and his wife, Wallis Simpson, ‘Lady Bird’ Johnson the then U.S. First Lady and Frank Sinatra and his wife, Mia Farrow. 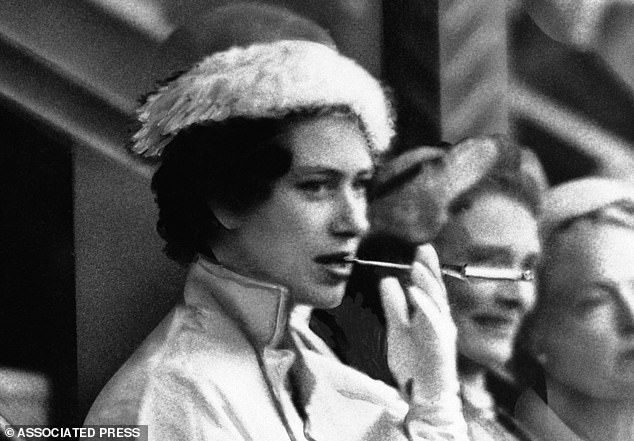 What these women didn’t expect was that Truman would eventually betray them by releasing these secrets to the world. In 1975, Esquire magazine published one of the finished chapters, La Côte Basque, 1965, which either mentioned the women personally or under a fictitious name. He describes Princess Margaret almost putting one character to sleep on account of being ‘such a drone’, but compared to the others, she got off lightly

While the ball was a huge success, it also marked a slow drift from writing towards celebrity: he would never complete another novel.

Capote did however embark on several intriguing writing assignments, including tagging along with The Rolling Stones on their colourfully-named Cocaine and Tequila Sunrise Tour of America in 1972.

Answered Prayers, the cause of his downfall, was never finished. The satirical novel which he had been working on since 1958, was to be his magnum opus — a portrait of the New York glitterati he knew so well.

He was fascinated by its beautiful women — such as Lee Radziwill, fashion icon Slim Keith and his closest friend, Babe Paley, wife of media mogul, William Paley — and they found him hugely entertaining.

What these women didn’t expect was that Truman would eventually betray them by releasing these secrets to the world. In 1975, Esquire magazine published one of the finished chapters, La Côte Basque, 1965, which either mentioned the women personally or under a fictitious name.

He describes Princess Margaret almost putting one character to sleep on account of being ‘such a drone’, but compared to the others, she got off lightly.

Babe Paley’s husband William was known privately in New York circles as a philanderer, but Truman made the mistake of alluding to his proclivities in print. Babe never spoke to him again.

Similarly, he alludes to the real- life 1955 shooting and killing of banking heir William Woodward Jr by his wife Ann, who claimed that she had mistaken him for a burglar, although was suspected by many of out-and-out murder. After discovering that the chapter was to be published in Esquire, Ann killed herself by taking cyanide.

The publication of the Answered Prayers extract led to Truman’s immediate dismissal from New York high society, yet further ignominy was to follow.

Although Lee Radziwill had defended him during the Esquire debacle, in 1979 when writer and nemesis Gore Vidal launched a million-dollar libel suit against Truman over the accusation that he had been thrown out of the White House for being drunk, Lee stunned him by signing an affidavit for Gore Vidal instead. Truman in turn labelled her ‘treacherous’.

Having failed to anticipate the backlash that the La Côte Basque, 1965 would inevitably cause, Truman went into a decline.

Although he partied at Studio 54 with a new set of friends, including artist Andy Warhol who had developed an obsession with him, his reliance on drugs and alcohol grew. In and out of various rehabilitation clinics and hospitals, he died in 1984 of liver disease and drug intoxication.

To the end, he would repeatedly voice his shock at the immediate social distancing that took place after he had aired his friends’ dirty laundry (‘I’m a writer, what did they expect?’ was his familiar refrain), yet the documentary puts forward an intriguing theory as to why he should have committed such a blatant act of social suicide.

His biographer, George Plimpton, whose taped interviews form the basis of the new documentary, says, ‘Truman felt that what had killed his mother were her aspirations to be in high society. He felt that his mother should be avenged in some way’.

What better revenge to inflict on image-obsessed socialites than to expose all their darkest secrets?

The title of Truman’s unfinished novel, Answered Prayers, was taken from the teachings of the 16th-century Carmelite nun, St Teresa of Avila, who said, ‘More tears are shed over answered prayers than unanswered ones.’

Truman Capote’s own prayers for fame, wealth and literary success were answered in full. But it was the tears he shed afterwards that hastened him to his grave.

The Capote Tapes will be available at altitude.film and on digital platforms from today.