‘I thought I was dead’: Paramedic tells of escape after parent’s house blew up in gas explosion

A gas explosion destroyed a terraced house in a Cornish seaside town last night with a bed left hanging outside.

Three people – Darren, Alan and Josie Cornish – were taken to hospital after the blast in Traly Close, Bude, Cornwall, and only suffered from shock and minor injuries.

One of the trio inside the home as it exploded described it as ‘like a bomb’ going off, saying: ‘I thought I was dead.’

Darren, 48, said: ‘The house is ready to fall to bits. It was really scary. I saw my life flash before before my eyes. I thought I was dead, I really thought I had died.’

Fire and police rescue teams said it was ‘a miracle’ nobody was killed when the end-of-terrace ‘virtually blew up’.

The explosion rocked other homes in the street just after 9pm last night when families were tucked up indoors, sheltering from Storm Christoph raging outside.

Glenn Thorne, Wales & West Utilities Gas Emergency Service Manager for Bude, said the cause of the explosion is still being determined but it is not believed to be related to the mains gas network. 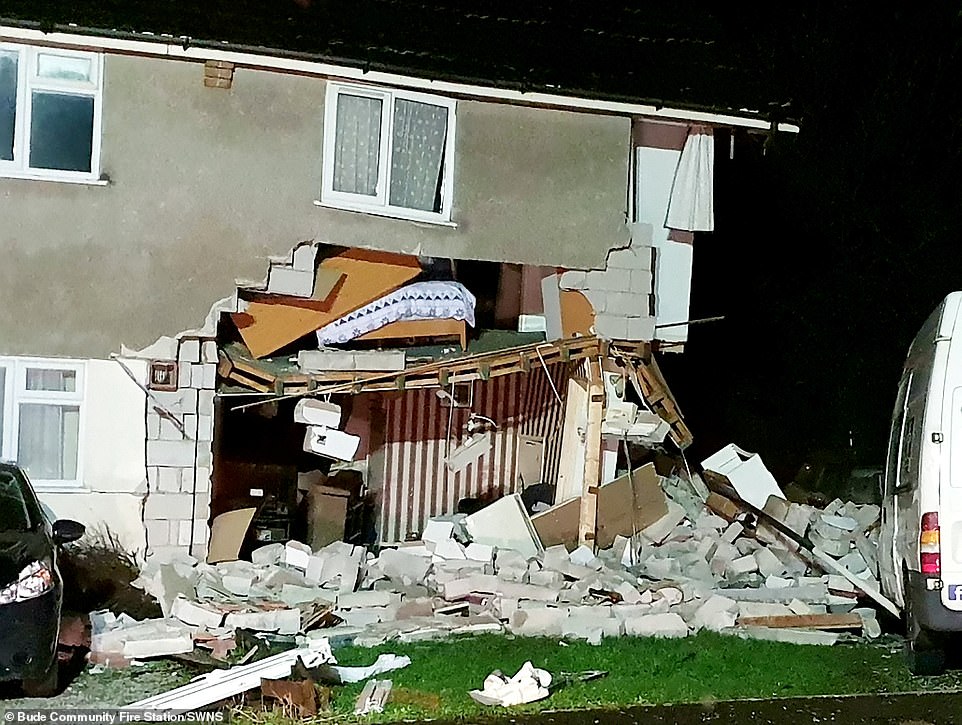 Dramatic images show the house in Traly Close, Bude, Cornwall, which was left destroyed with a bed hanging outside after a gas explosion at around 9pm last night 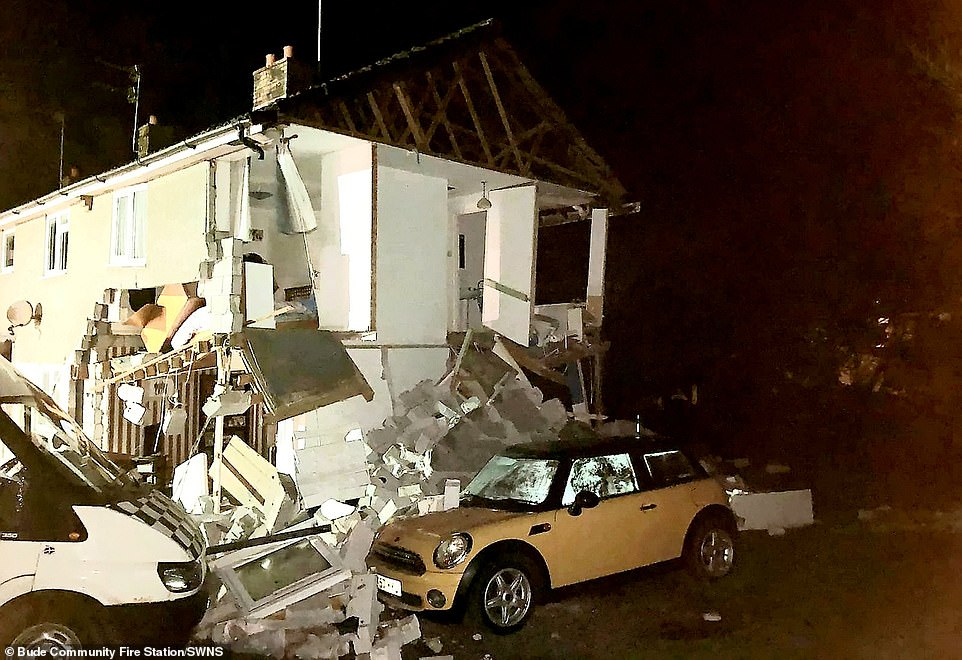 A side view of the devastated home in a Cornish seaside town. Three people – two men and a woman – were taken to hospital and escaped with no serious injuries

The property is owned by Darren’s parents Alan, 73, and Josie, 75, who were enjoying an evening in at the time.

Darren, a paramedic, has now given a dramatic account of the explosion and revealed his elderly parents had ‘lost everything’ as the home was not insured.

He said he feared there was a gas leak so went to investigate with his mum, who instinctively turned on the cooker to try and show it was working correctly.

Darren said he tried to stop her but it was too late, and the pair were thrown against a wall and suffered burns to their face and hands – and had their hair singed.

Darren said: ‘I’m okay, alive. I was up with my mum and dad and we were sat in the lounge watching TV.

‘Me and my dad kept falling asleep which I thought was odd, then I thought I could smell gas so I asked if the cooker was working.

‘I went to check and my mum came with me. It was all off and mum went to show me that the oven was working OK and before I could stop her she lit the oven and bang – up it went.’

The force of the explosion knocked Darren and his mum off their feet, and in that moment he thought he had died – and said he saw his whole life flash before his eyes.

But he regained his composure when he heard his mum screaming, and rushed into action.

He added: ‘It was like a bomb had gone off. I could hear mum screaming. I grabbed her and took her outside. Dad was still in the front room sitting in his chair watching the TV – although the television had gone off by this point. 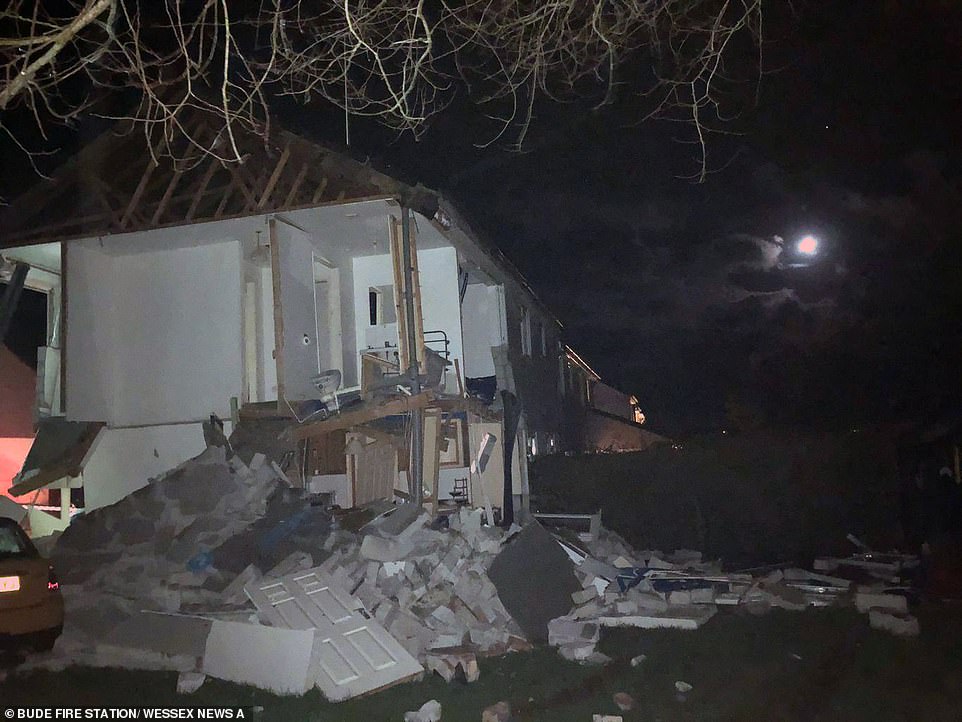 Rubble and other furniture can be seen hanging outside the house in Cornwall. The cause of the explosion is not believed to be related to the mains gas network

‘I lifted mum over the rubble and one of my mates who lived opposite came over to help get them out. We had to man handle my dad out because he’s a big guy.

‘There was water everywhere and gas was hissing, so then I just got myself out and waited for the fire brigade to arrive.’

Despite being in the room with the explosion, Darren said he only suffered superficial injuries including singing his hair. His mum was taken to hospital to be checked, and his dad, who recently had a heart attack, was thoroughly examined by paramedics.

Darren continued: ‘Mum went to hospital, she had some burns to her face and hands. Dad was unscathed. It was just instinct to get out and get everyone out the house.’

Alan and Josie, who have three children and six grandchildren, didn’t have any home insurance on their property and many of their possessions were destroyed.

Darren added: ‘We’ve been nagging them to get insurance for years but they’re old school, never had a mortgage and didn’t have insurance.

‘They’ve lost everything, their house and their belongings.’

Cornwall Fire and Rescue Service arrived to find the bed and other furniture hanging from the devastated house, for which the damage bill will run into tens of thousands of pounds.

There were reports of a strong smell of gas in the area as fire teams from Bude and Holsworthy, backed up by specialist shoring equipment, tried to stop the two-storey house collapsing completely.

A fire spokesman said: ‘On crews arrival they confirmed that there were no casualties trapped within the damaged structure and the incident was sectorised.

‘Crews remained on scene until the property had been assessed by a structural surveyor. The incident was left in the hands of police.’

Neighbours were evacuated as the smell of gas persisted, and were found emergency accommodation for the night.

Ms Thorne told Cornwall Live: ‘On arrival we found that the property had been damaged and emergency services were in control of the scene.

‘We worked with the emergency services to make the area safe and carried out all necessary gas safety checks. We have found no evidence of a mains gas leak in the area and the property itself was not connected to our gas network.

‘The cause of the explosion is still being investigated by the emergency services, however, we do not believe it is related to the mains gas network.’

Devon and Cornwall Police said this morning: ‘Police were called at 9pm yesterday evening, Wednesday 20th January, with a report that a gas explosion had occurred inside a residential property on Traly Close, Bude, resulting in the partial destruction of the property, an end of terrace house.

‘The fire service, ambulance service, and a structural engineer attended. Three occupants, two men and a woman, were taken to hospital with minor injuries.

‘The next door residents were evacuated. All those affected have found alternative accommodation. The house remains cordoned off this morning.’

A spokesman for Bude Community Fire Station added: ‘Shortly after 9pm on Wednesday, we received multiple calls to a serious incident involving a gas explosion at a property in Bude, with people potentially trapped inside.

‘Thankfully on arrival it was quickly established that all persons were accounted for, and remarkably, there were no serious injuries – those involved were left in the care of the South Western Ambulance Service NHS Foundation Trust crews.

‘Due to the instability of the dangerous structure, a strict cordon was put until place, the gas and electricity supplies were isolated and the nearby properties were evacuated.

‘Fire crews and officers from Bude Police monitored the building closely whilst a structural engineer carried out checks. Once it was deemed that there was no further risk of danger, our crews left the scene shortly after midnight, and the incident was handed over to the police and gas safety engineers.’

Coronavirus: ‘I was given a lung transplant during lockdown’

Jessica Mulroney Stands Up for Meghan Markle After Fallout