This is the dramatic moment an unlucky impala struggled free from the jaws of a crocodile only to fall into the clutches of a hungry leopard.

Angela and Craig Weeks recorded the footage during a trip to the Kruger National Park, South Africa, with their two sons – aged eight and 11 – and grandfather.

The footage showed the young impala successfully escaping the crocodile before being killed by another fierce opponent just seconds later.

In the clip, recorded by the couple at the beginning of the year, the impala can be seen flailing between the jaws of the crocodile on a river bank.

The pair tussle with one another and eventually plunge into the murky waters.

Muffled gasps can be heard from onlookers before the impala then tentatively emerges from beneath the water seemingly unscathed.

It struggles to mount the muddy bank and as it waits to catch its breath a leopard is suddenly spotted lurking in the nearby undergrowth. 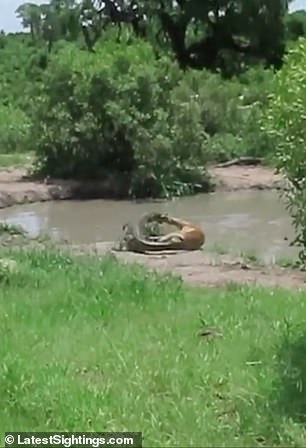 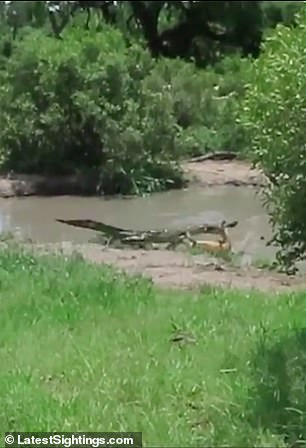 In the clip, recorded at Kruger National Park, South Africa, the impala can be seen flailing between the jaws of the crocodile on a river bank

The predator remains still as it stalks its prey which has finally scrambled back on to dry land.

Then the leopard pounces and the impala is in a life-or-death battle once again but is this time unsuccessful.

The leopard eventually drags the impala’s carcass to its original shaded hiding spot under the shelter of undergrowth. 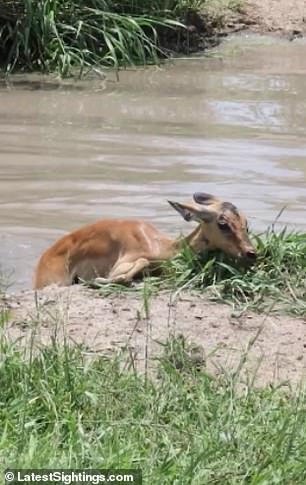 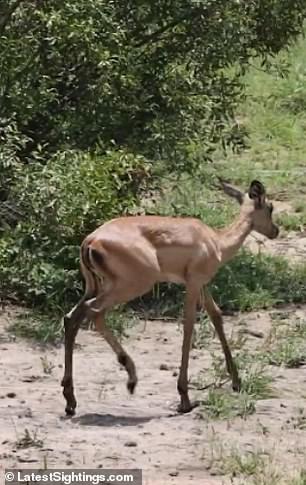 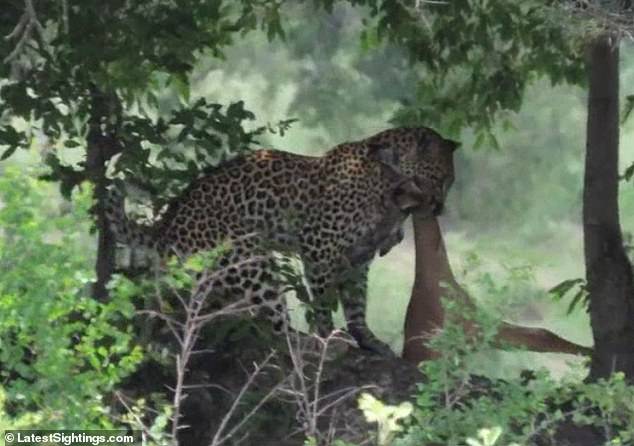 Doctor Angela and banker Craig told LatestSightings.com: ‘We were watching a herd of impala drinking at a large muddy pond that had formed next to the road after recent heavy rains near Biyamiti Weir.

‘We had stopped to take a closer look at one impala that had a broken leg.

‘Suddenly a four-foot crocodile shot out of the water and grabbed a young impala, dragging it into the muddy water and submerging it.’

They continued: ‘A struggle ensued for about two minutes but the impala was able to break free and jump out of the water.

‘The impala herd had been alarm calling really loudly during the impala-crocodile struggle, which is basically a call for food for any predator in the area, as something most likely has just been caught.

‘This time, a nearby Leopard heard the alarm calls and came to see if it meant a free meal for it.

‘We were shocked by the unexpected impala takedown and really surprised that a crocodile was lurking in such a small mud pool.

‘When the impala eventually escaped the croc, we were relieved but seconds later totally surprised by the leopard’s stealth ambush. It was an unforgettable sighting and a once-in-a-lifetime experience for us.’

‘After all the commotion, the leopard proceeded to consume the impala in the shade of a nearby fallen tree. We were able to watch this sighting with our two boys, 8 and 11, and their granpa’.

If I get vaccinated, do I have to go back to the office? Not necessarily

Number of private school tutors paid more than £100,000-a-year soars by 25 per cent in two years

The best things to do in Munich, from royal palaces to buzzing beer gardens