In Michigan, a Dress Rehearsal for the Chaos at the Capitol on Wednesday 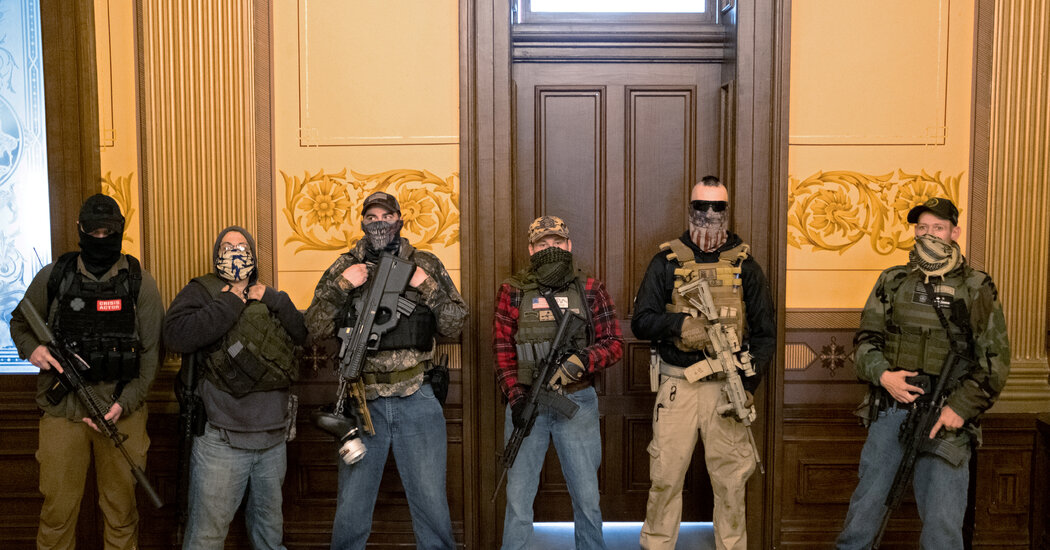 But State Representative Beau LaFave, a Republican from Michigan’s Upper Peninsula, said it’s a stretch to connect those dots. “There were a lot of angry people at both things, but nobody did any damage or hurt anyone in Michigan,” he said. “They were angry and yelling, but they didn’t punch any cops, and they didn’t do any damage inside the building.”

Indeed, while the protest in April was loud and tense, it did not get violent, although one person was arrested after an altercation between two men outside. But the rhetoric in the crowds at protests in April and May was heated. One protester carried a sign that read, “Tyrants Get the Rope,” and another carried an American flag that had a doll made to look like Ms. Whitmer hanging from it.

Meshawn Maddock, head of the national organization, Women for Trump, and in line to become the vice-chair of the state’s Republican Party, helped organize that “Unlock Michigan” rally in April and recently organized busloads of Michiganders to travel to Washington. Photos and videos from the rally in the nation’s capital filled her social media pages and, while walking toward the U.S. Capitol, she praised the “most incredible crowd and sea of people I’ve ever worked with.”

While she attended the rally outside the Ellipse, she said she was not at the Capitol when the mob of Trump supporters stormed the building, and she later condemned the violence.

On Wednesday, while Ms. Maddock was in Washington, several hundred people gathered outside Michigan’s statehouse to protest the election certification happening nearly 600 miles away. The statehouse was closed, though, to comply with Covid rules that it be shuttered when the Legislature is not in session. The rally, which featured Trump flags and hats and a handful of men armed with weapons, remained peaceful — and pointed. One protester waved a Trump flag that had four bobblehead dolls hanging from it: Bill and Hillary Clinton, Barack Obama and U.S. Supreme Court Chief Justice John Roberts.

Michigan is an open carry state, so it is not unusual to see armed individuals walking the halls of the state Capitol. The Capitol Commission, the body that sets rules and approves maintenance projects for the building, debated banning guns in the Capitol after that April protest, but no action has been taken.

MAFS; Jake Edwards says he regrets cheating on his ex-fiancée