The Western Australian government is set to shut down Fremantle’s controversial tent city after two alleged child sexual assaults were linked to the growing homeless camp.

More than 100 vagrants staying in up to 75 tents set up in Perth‘s Pioneer Park have now been offered temporary hotel stays as authorities prepare to dismantle the site.

The move comes after police responded to 77 calls for assistance since Boxing Day, linking a number of serious allegations including assaults and child sex offences to the camp. 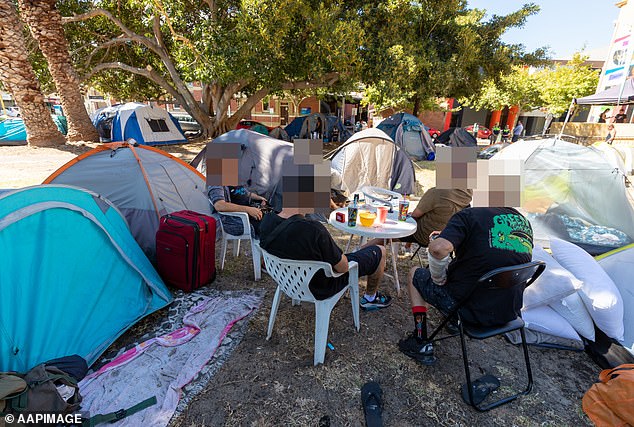 But homeless advocates dispute the connection between some of the alleged criminal activity and the camp, claiming Mark McGowan’s Labor government has failed to address the housing crisis in any lasting way.

The Premier remained staunch on the issue Friday and renewed his claims that those living in tent city are being lured there by ‘professional protesters’ and ‘anarchists’ from groups like radical environmental action network Extinction Rebellion.

‘They’ve been pulling people out of supported accommodation with false promises and putting them in this campsite,’ he said.

‘It’s a rotten exploitation of vulnerable and needy people that the organisers have engaged in here.’

Earlier this week McGowan said the homeless families crowding into tent cities were being attracted to the site by extravagant ham lunches.

‘They’re organising lunches there with ham off the bone and quite attractive food in order to attract people there,’ he said.

‘Rather than helping people, they are exploiting them… they are coordinating this as some sort of protest movement.’ 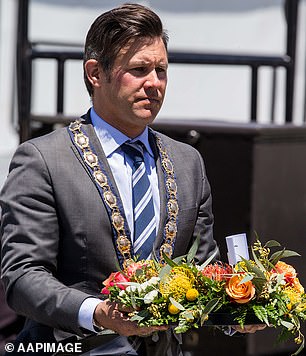 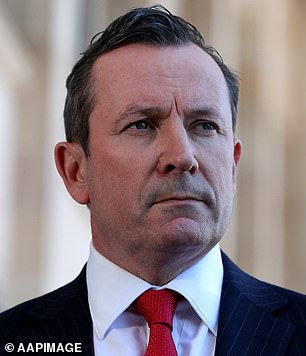 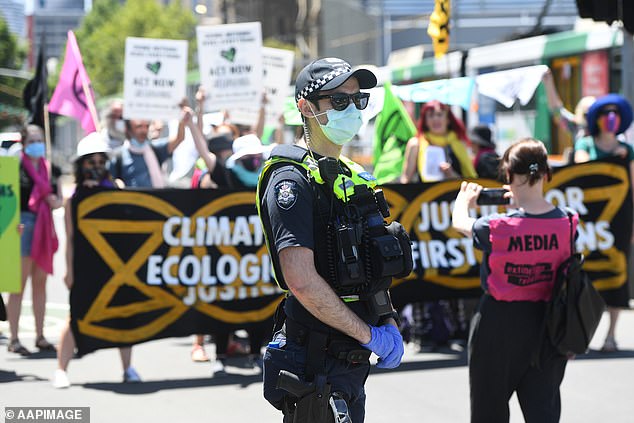 A working group set up to deal with the problem detailed the circumstances of 100 people, aged 21 to 71, living there and found 90 per cent were genuinely homeless.

Officers have issued move-on notices and fines for alcohol and minor criminal offences at two tent cities in Pioneer Park and in the CBD, as locals raised fears about growing violence, theft, and piles of rubbish and discarded syringes.

Police said on Thursday there were ‘reportable incidents in the area’ in recent weeks resulting in significant charges being laid.

They included two men, aged 44 and 41, allegedly raping two girls aged 13 and 14 on Fleet St in the early hours of January 1. 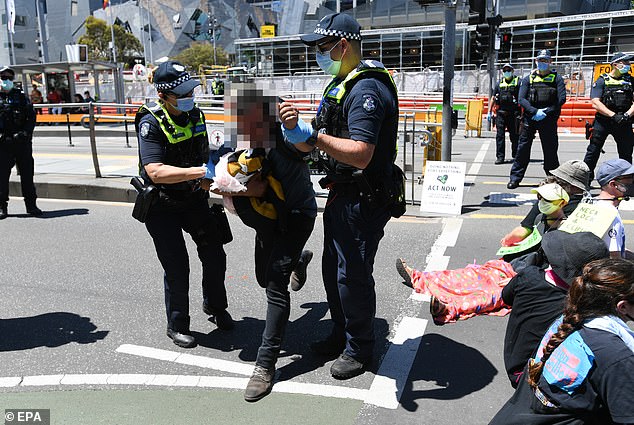 ‘Some of the charges are very, very disturbing,’ Mr McGowan told reporters.

‘This is a bad situation. Innocent members of the public are being victimised, the local businesses are being attacked.’

Police also highlighted several alleged assaults in Fremantle, including on a man struck in the head with a rock at Pioneer Park and a 51-year-old woman threatened with a knife, as well as a police officer being attacked. 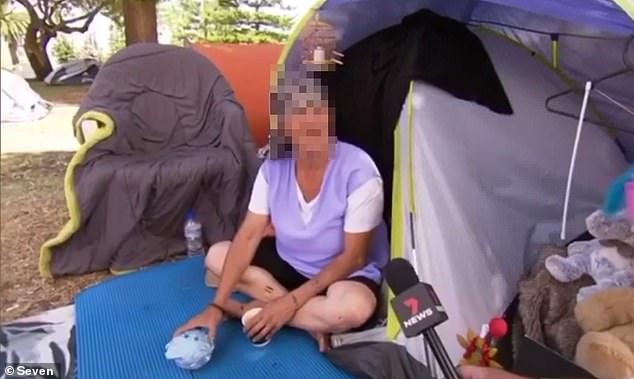 ‘Every person who is willing to accept support and is sleeping rough at Pioneer Park is being offered appropriate accommodation,’ director general Michelle Andrews said in a statement.

But House the Homeless WA spokesman Jesse Noakes said there had been a systemic failure by the McGowan government to address the state’s housing crisis.

‘One week’s accommodation is not a solution to homelessness. It is a road to nowhere,’ he said. 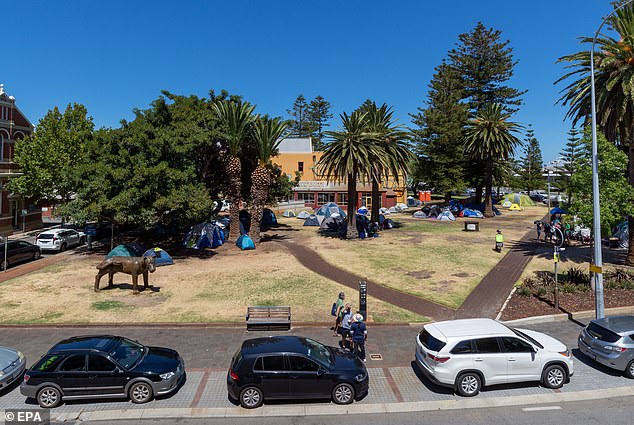 ‘Every person who is willing to accept support and is sleeping rough at Pioneer Park is being offered appropriate accommodation,’ WA’s Department of Communities director general Michelle Andrews said

Fremantle mayor Brad Pettitt – who is running for the Greens at the March state election – also took aim at the state government, noting that rates of rough sleeping has increased since the onset of the coronavirus pandemic.

‘It is the premier and the WA state government who are responsible for ensuring this housing and the necessary wrap around services are provided and, so far, they have failed to do so,’ he said.

But Mr McGowan said the state government was powerless to clear out the camp as Fremantle council had allowed them to stay, so they were not trespassing.

‘The council needs to step up here… the council has created a difficult and dangerous situation,’ he said. 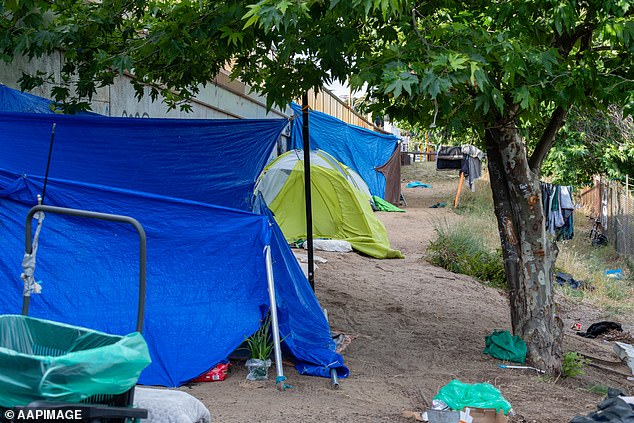 With voters set to go the polls on March 13, homelessness is expected to be a key election issue. Pictured: A homeless camp in Perth’s CBD near the Lord Bridge

Mr Pettit remains confident the situation can be resolved without force.

‘We are meeting regularly with the police in terms of how they deal with it. They are quite clear they have no interest in resolving this by going in with force,’ he said.

With voters set to go the polls on March 13, homelessness is expected to be a key election issue.

Shelter WA estimates there are about 15,000 on the social housing wait list and more than 1,000 sleeping on the street.

At the same time rental vacancies in the resource rich state have reached record lows.

Indigenous leaders and homeless advocates, including Megan Krakouer from the National Suicide Prevention and Trauma Recovery Project, have also questioned the premier’s claim that there are adequate beds available for the homeless.

‘I strongly urge Mr McGowan come to the Fremantle camp and speak to the people themselves to find out the truth about desperate people abandoned by his government,’ Ms Krakouer said.

Church of England paves the way for same sex marriages