An Instagram influencer has apologised after being blasted for scrawling her account handle on the chalk cliffs at a Durdle Door beauty spot in Dorset.

Alexandra Milam, 24, travelled from London to the Jurassic Coast World Heritage site, where she was snapped during a photo shoot in front of the 180-million-year-old rocks.

Lulworth Rangers and teams of volunteers were left to clean up the mess left by Alexandra and hundreds of other tourists who flocked to the coast to enjoy the hot weather. 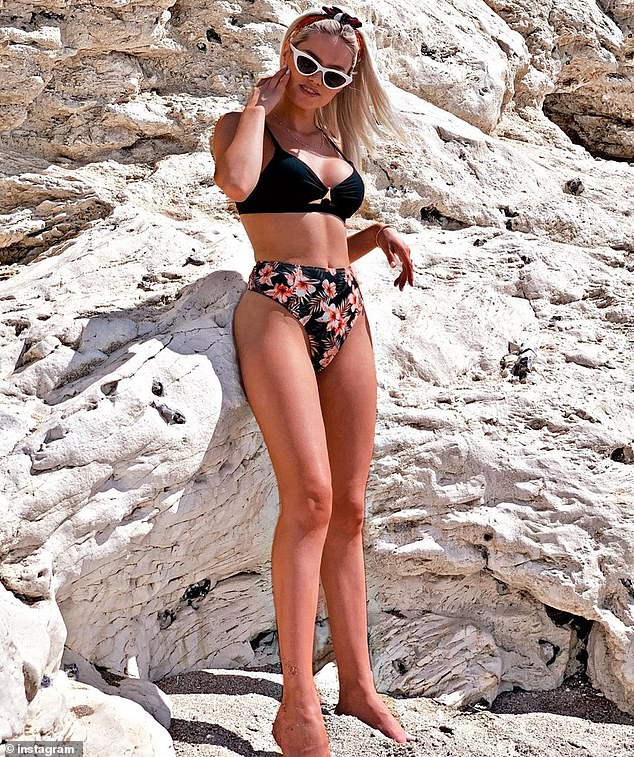 Alexandra Milam, 24, visited the Jurassic Coast World Heritage site in Dorset for a photoshoot, where she was snapped, above, in front of the 180-million-year-old rocks 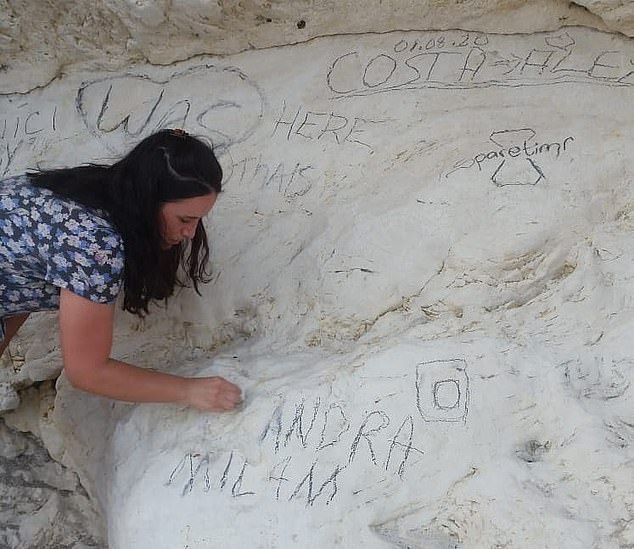 One volunteer posted a photo on Instagram, which shows ‘Andra Milam’ scrawled across the cliff. She wrote: ‘Don’t mind me, just cleaning graffiti off a UNESCO world heritage site!’

They filled 90 bags of litter and spent several hours scrubbing graffiti off the rocks.

As well as apologising, Alexandra has now pledged money to a charity fundraiser set up to clean the beach.

She said: ‘I feel awful because of this horrific event in my life and I wish to express my deep regret for the damage by my name written on the Jurassic Coast.

‘I have learned a huge lesson, one which will forever mark me. I reached back to the community to meet all the people who sacrificed their precious time to fix this disaster.

‘I want to spread the awareness to everyone who doesn’t understand the beauty and importance of this place. I am disappointed that I didn’t understand it at the time and I don’t want anyone else making the same mistake.

‘Maybe nothing will undo the damage the writing caused but I will try to make things better and I hope people will give me the chance.’ 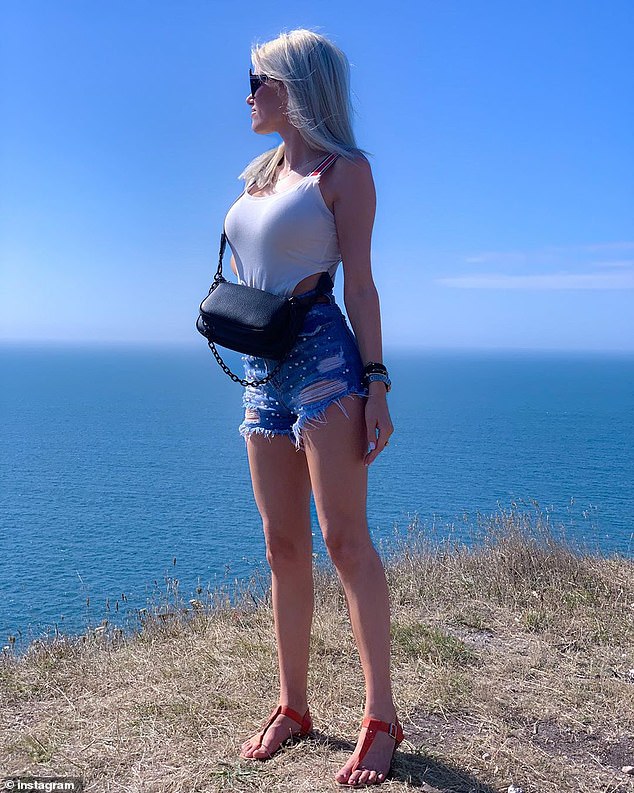 As well as apologising, Alexandra, above, has now pledged money to a charity fundraiser set up to clean the beach and said she wishes to express her ‘deep regret’

‘And if you ever wanted to know what scrubbing off a hundred tags in 30 degree heat for over 2 hours looks like, well the last photo says it all (a pair of blistered hands).’

Another volunteer posted a picture showing ‘Andra Milam’ written across one of the rocks, captioning: ‘Don’t mind me, just cleaning graffiti off a UNESCO world heritage site!

‘I feel physically sick after every clean but this area makes me feel so much worse. It’s horrific.’

James Weld, owner of the Lulworth Estate which owns Durdle Door, described scenes over the weekend as ‘horrendous’.

He said: ‘We have a support team that are litter picking day and night and there are some fantastic volunteers as well. 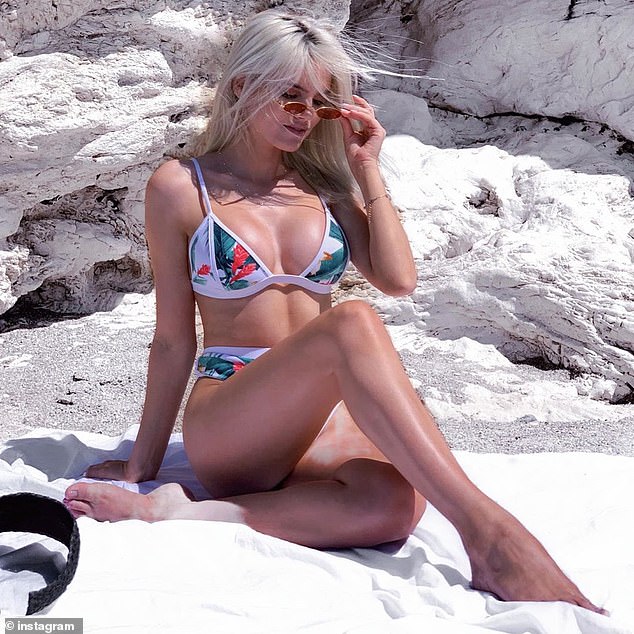 The fashion and make-up influencer, pictured, said: ‘Maybe nothing will undo the damage the writing caused but I will try to make things better and I hope people will give me the chance’ 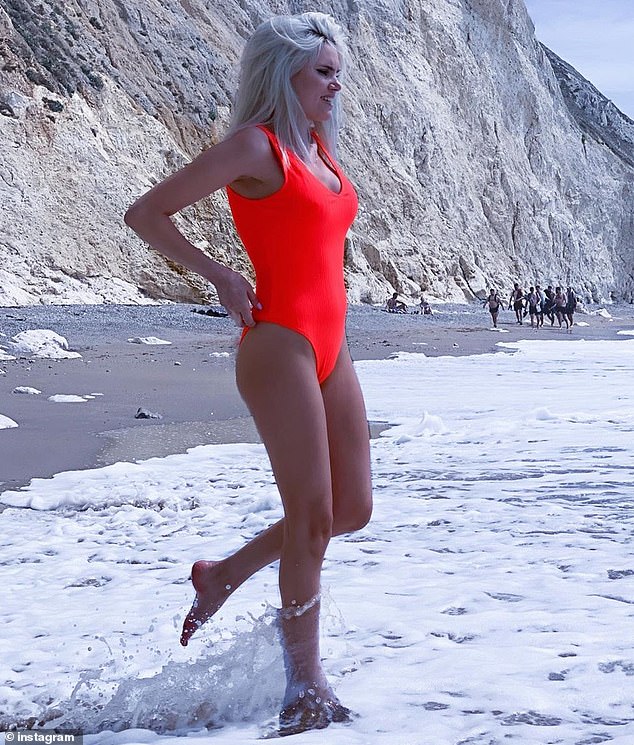 Alexandra pictured in Dorset. The social media influencer said she will donate £30 monthly to the fundraiser which was set up by artist Erin Tyrrell, a volunteer beach cleaner

‘They don’t just clean up after people, they offer advice and hand out rubbish bags to people on the beach. We try and educate people but we can’t speak to every person.

‘It’s constant. On Sunday morning we took about 50 bags and there was about 40 from Friday. It’s horrendous.

‘It is a natural environment and managing it is a complete nightmare. It’s extraordinary how some people are behaving.’

Alexandra, who is a fashion and make-up influencer, said she will donate £30 monthly to the fundraiser which was set up by artist Erin Tyrrell, a volunteer beach cleaner.

Erin said: ‘It’s really heart-warming to see when someone has done wrong makes up for their actions.

‘She apologised and I felt that she really wanted to help and meant it.’

Coronavirus US: Florida father and son doctors, 89 and 57, die