Iowa Governor Kim Reynolds on Friday signed an order which rolled back COVID-19 restrictions, lifting the state’s mask mandate and capacity limits in bars and restaurants.

The conservative lawmaker ‘strongly encouraged’ residents with medical conditions and those over the age of 65 to limit activities outside of the home as she signed a new Public Health Disaster proclamation to ease existing public health measures from Sunday.

Iowa also no longer calls for businesses to limit the number of customers or keep them socially distanced.

Despite the easing of the state regulations, Reynolds still encouraged businesses to take health measures as advised by the Iowa Department of Public Health, which has warned that the governor has pulled back the restrictions prematurely.

It is not known why Reynolds has decided to relax the regulations now, less than a week after the new, more transmissible version of the coronavirus from the U.K. was confirmed in three Iowa residents. 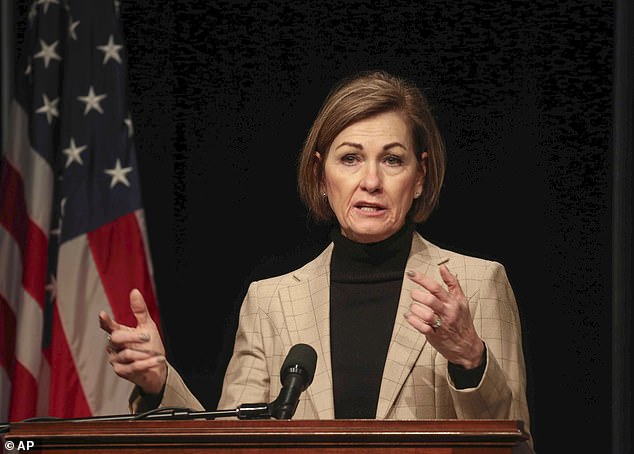 Iowa Governor Kim Reynolds on Friday signed an order which rolled back COVID-19 restrictions, lifting the state’s mask mandate and the limit on capacity in bars and restaurants 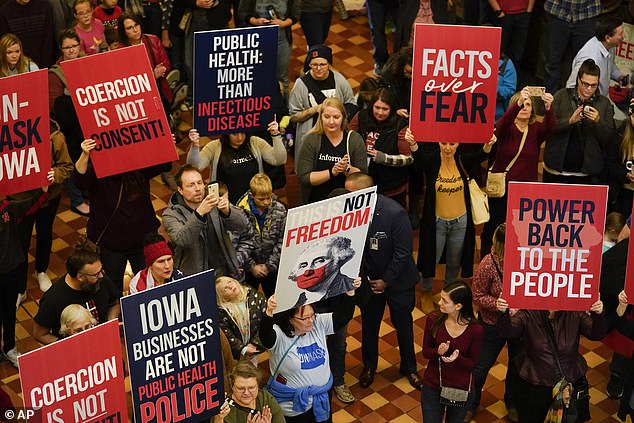 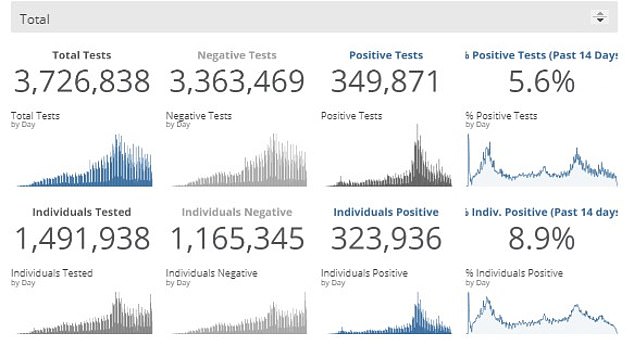 Daily cases in Iowa have been dropping since the November peak but the positive test rate still remains at 5.6 percent as three cases of the U.K. variant are confirmed in the state

The state has also led one of the slowest rollouts of the vaccine in the country.

Iowa is currently ranked 47th in the country in per capita vaccine distribution from the federal government, according to Reynolds.

It is 46th in the rate of administering vaccines to residents.

As of Saturday, only 7.1 percent of residents had received one dose of the vaccine and 2.6 percent had received two doses.

Despite the new variant and the slow vaccine distribution, Reynolds is also easing the restrictions just after she announced that students could be brought back for in-person schooling.

On January 29, Reynolds signed legislation that allowed parents the option to send their children back to school full-time.

It means that from February 15, all K-12 schools in Iowa will be required to offer 100 percent in-person instruction to all students.

Prior to this schools had been operating entirely online or through a schedule of instruction days alternating between online and in person.

New daily cases of the coronavirus in Iowa and the state’s hospitalizations from the virus have dropped since its peak in November.

Yet 804 new infections were still reported on Friday, just a day after its death toll reached 5,000.

‘I don’t think it’s a good idea, to put it bluntly,’ Lina Tucker Reinders, executive director of the Iowa Public Health Association, told the Des Moines Register of the easing of the restrictions.

‘We have so many people wanting a vaccine, which is fantastic,’ she said.

‘This isn’t the time to let our guards down. This is the time to just, head-down, trudge on as we have been to make sure we get everybody through it.’ 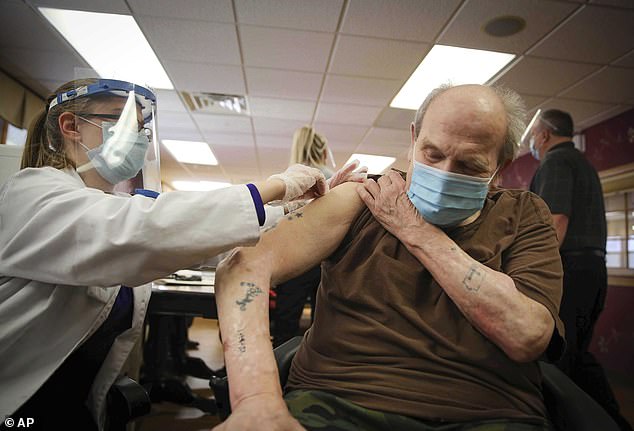 Iowa has also led one of the slowest rollouts of the vaccine in the country. Pictured, pharmacist Hayley Perrin administers a Pfizer-BioNTech COVID-19 vaccination in Iowa in January 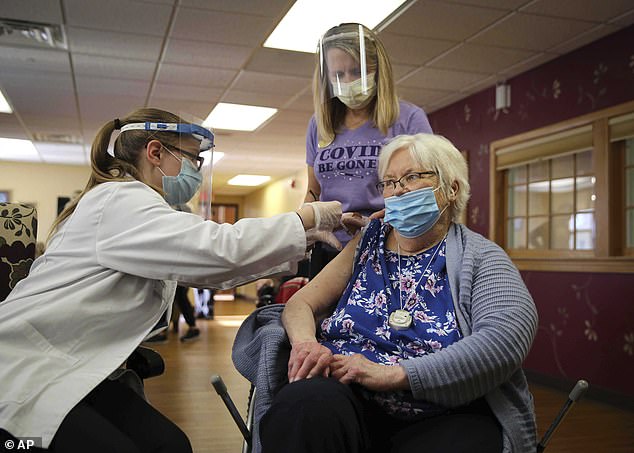 As of Saturday, only 7.1 percent of residents had received one dose of the vaccine and 2.6 percent had received two doses. It ranks 46th in the country for vaccine administration

Rep. Cindy Axne, the only Democratic member of Iowa’s congressional delegation, also argued that the governor’s move is ‘short-sighted, ill-conceived, and dangerous.’

‘In recent weeks, I’ve spoken to the governor and our federal health partners about increasing Iowa’s vaccine allocations to bring us closer to ending this crisis,’ Axne said in a statement.

‘But this new proclamation undermines all of those efforts — disregarding the lagging vaccinations of our seniors and other vulnerable populations and skipping ahead to a return to normalcy that is unwarranted.’

Reynolds is a supporter of former President Donald Trump and claimed in a video posted to social media last week that ‘the far left is taking over Washington D.C.’

Reynolds had first introduced a mask mandate in November – behind many other states in doing so – which required Iowans two years of age and older to wear masks if they were in indoor areas or were spending more than 15 minutes with people not in their household. 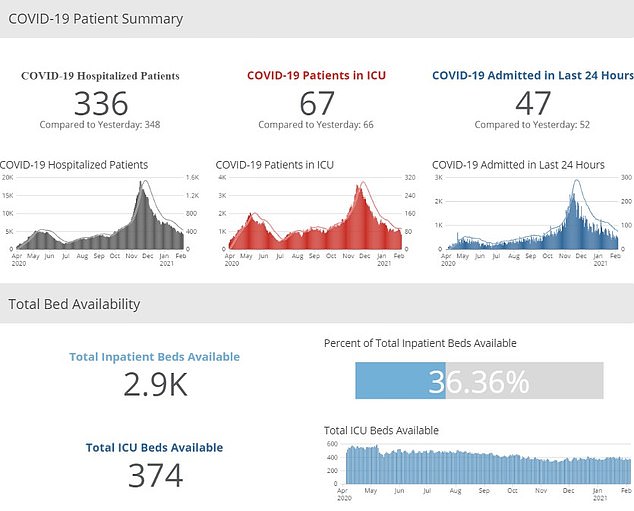 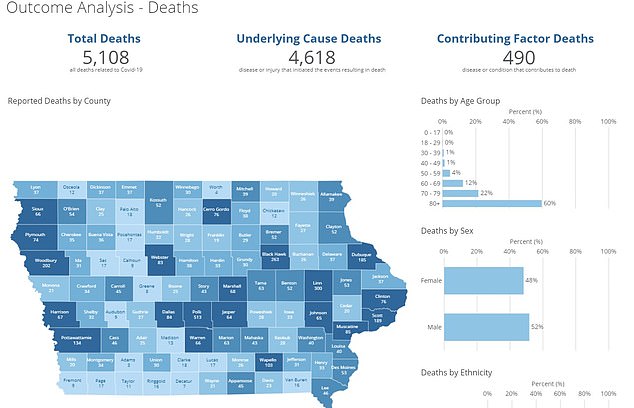 The state reached more than 5,000 deaths from coronavirus on Thursday

The relaxing of the rules in Iowa was criticized by some residents, earning Reynolds the nickname COVID Kim, which began trending on social media on Friday evening.

‘We all know Kim Reynolds lifted restrictions because she has a Super Bowl party to throw this weekend. Let’s see how Iowa is doing in 3 weeks or so,’ wrote one Twitter user.

‘This, as the U.K. variant has been confirmed in Iowa & districts are required to offer 100% in-person learning option this month.’

Residents in nearby states were also unhappy that they could be exposed to the virus due to their neighbor’s abandonment of the restrictions.

‘@GovPritzker can you please close all inbound traffic from Iowa into IL starting Sunday please?’ one Illinois resident asked. ‘Kim Reynolds shouldn’t be allowed to kill us, just because she doesn’t give a s*** about Iowa’. 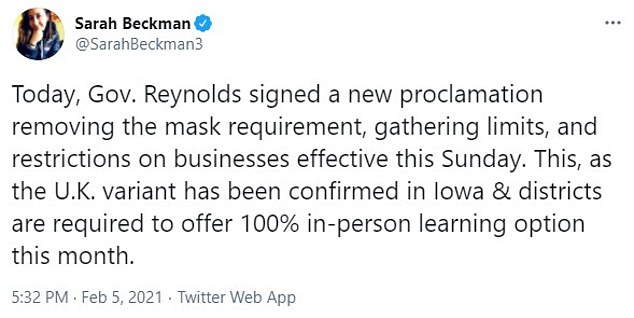 Gov. Reynolds order was criticized on Twitter where she earned the nickname Covid Kim 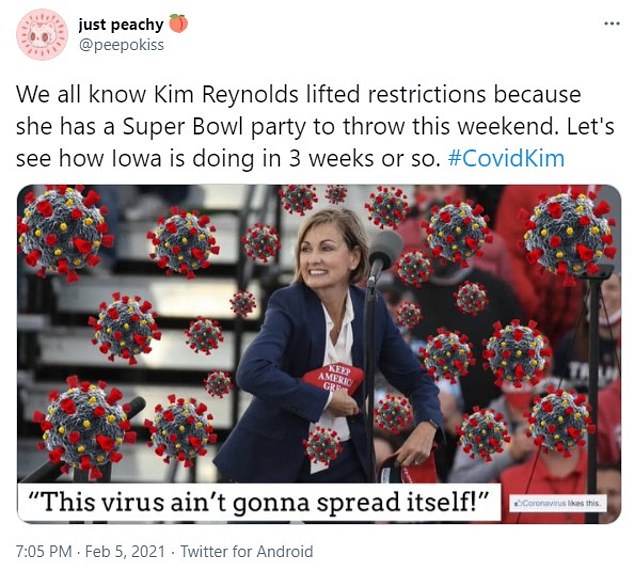 However, the governor’s order was welcomed by Jessica Dunker, president, and CEO of the Iowa Restaurant Association.

‘Quite frankly, it allows us to go back to doing business at a really critical time,’ she said.

‘We are … one day before the Super Bowl, which opens up a lot of businesses for crowds to come in and safely watch the big game.’

Some restaurants and businesses have said that they will continue with a mask mandate on their own premises as entities can still institute their own rules.

‘I’m not a doctor and (not) a disease specialist, so I don’t know all these things, but I can say that the strength of the restaurant and bar business depends on us coming out of this the right way,’ Jeff Bruning, co-owner of Full Court Press told the Register.

Shannon Breyfogle of Quarter Barrel Arcade & Brewery told KCRG, ‘I thought it was kind of premature, but we are going to continue wearing our masks and trying to ask customers to as well.’

Nationwide, there have been 26.8 million Americans infected and 461,262 fatalities. 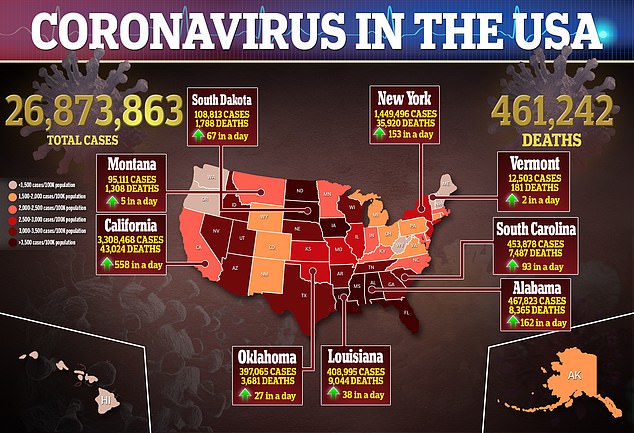 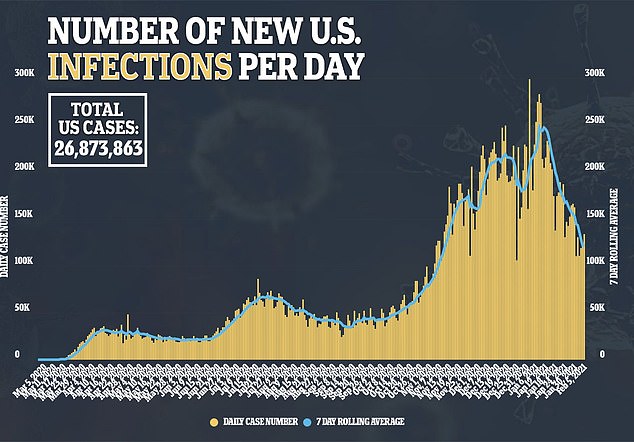 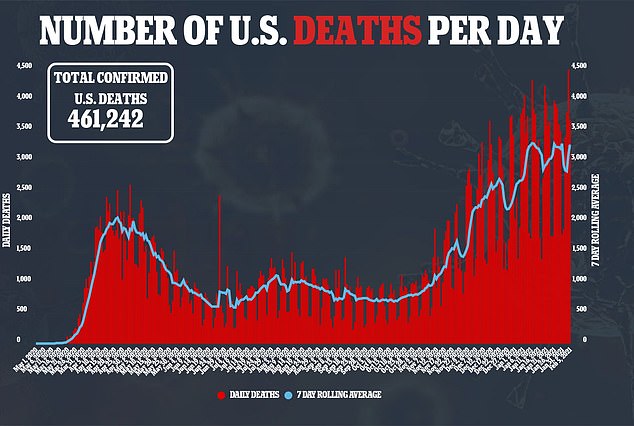 Young people reveal how Duke Of Edinburgh Award inspired them

How to turn self-doubt into global success by Anya Hindmarch