Is President Biden Ready for the New Senate? 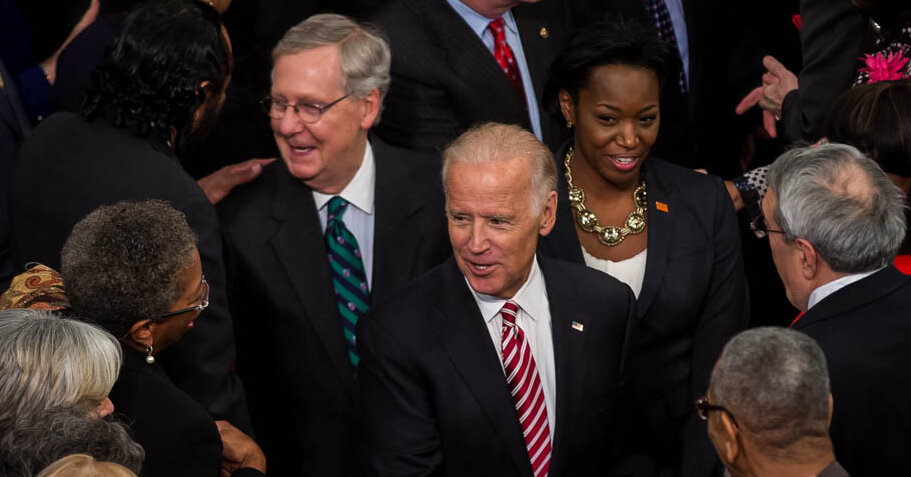 Sign up here to get On Politics in your inbox every weekday.

It was the Senate version of a gold watch.

As the Obama administration wound to a close in December 2016, Joe Biden’s old pals gathered around their water cooler — the dais on the Senate floor — and threw what passes for a retirement party in Congress.

The event was a bipartisan lovefest. Ten Republicans praised Mr. Biden as a “wonderful man,” “God-fearing and kind,” “a genuine patriot” with “boundless energy and undeniable charm.”

Even Senator Mitch McConnell, Republican of Kentucky, shared the love, recounting tales of legislative wrangling and shared stages, including one at a University of Louisville center founded by the Senate minority leader.

“You have been a real friend, you have been a trusted partner and it has been an honor to serve with you,” he said. “We are all going to miss you.”

Four years later, Mr. Biden’s old stamping grounds has become a far less collegial and productive place. Just days after Mr. Biden called for unity in his inaugural address, the Senate is already locked in a stalemate, with leaders of the two parties unable to agree on basic rules of operation.

“I look back with nostalgia to how we used to work together,” said Harry Reid, the former Democratic majority leader who retired from the Senate the same year that Mr. Biden left Washington, musing on the Congress of the 1970s and 1980s. “Now the Senate does nothing.”

Much has been made of Mr. Biden’s extensive experience in government, a central part of his pitch to voters during the presidential campaign. After serving 36 years in the Senate and another eight in the White House, the new president enters with a deeper understanding of the legislative process and politicians than any president since Lyndon Johnson, a former Senate majority leader.

The question is whether Mr. Biden’s legislative prowess is, well, a little bit sepia toned. When Mr. Biden talks about bipartisanship now, a fair number of Democrats in Washington quietly roll their eyes.

In the Senate, more than a quarter of the seats have changed parties in the past four years — including five of the Republicans who praised Mr. Biden at that 2016 event. Many of the new members are products of the deeply polarized Trump era and have never served in a more functional Senate.

Some of Mr. Biden’s closest aides believe the attack on the Capitol broke the fever within the Republican Party, creating space for its elected officials to work across the aisle. Yet, there are plenty of signs that former President Donald J. Trump’s influence on his party may linger.

While the former president’s approval rating dropped sharply among Republicans after the attack, Trumpism remains embedded in the firmament of the party. Plenty of Republican state officials, local leaders and voters still believe Mr. Trump’s baseless claims of election fraud and view Mr. Biden as illegitimate. They’re threatening primary challenges against Republicans who work with Mr. Biden, complicating the political calculus for members of Congress, including several up for re-election next year, like Senators Rob Portman of Ohio and Lisa Murkowski of Alaska, who might be inclined to cut some legislative deals.

“We just passed a program with over $900 billion in it,” Senator Mitt Romney, Republican of Utah, told reporters shortly after the inauguration. “I’m not looking for a new program in the immediate future.”

And then, there’s the issue of Mr. Biden’s own party. After four years of Mr. Trump, many Democrats are unwilling to compromise on their agenda. A vocal portion of the party is pushing to pass Mr. Biden’s rescue package through a budget resolution that would allow the legislation to clear the Senate with just 51 votes, instead of the usual 60 votes.

Mr. Reid is urging Mr. Biden not to waste much time trying to win over his former Republican colleagues. Like many Democrats, he’d like Mr. Biden to eliminate the legislative filibuster — the 60-vote requirement for major bills — allowing Democrats to pass their agenda with their slim majority.

It’s that very prospect that worries Mr. McConnell, who refuses to sign an operating agreement until Democrats guarantee that they will not change the rules — essentially disarming the new majority before major legislative fights even begin. Although Democrats have no firm plans to gut the filibuster, many believe the threat of that possibility remains a powerful lever to force Republicans to compromise.

A staunch institutionalist, Mr. Biden has been leery about eliminating the filibuster, though he expressed some openness to the idea in the final months of his campaign. Mr. McConnell’s opposition could change his views, some Democrats argue, as the new president becomes frustrated with his stalled legislative agenda.

“Knowing Joe Biden the way I do, he will be very patient and try to continue how the Senate used to be,” Mr. Reid said. “I am not particularly optimistic.”

We want to hear from our readers. Have a question? We’ll try to answer it. Have a comment? We’re all ears. Email us at onpolitics@nytimes.com and follow me on Twitter at @llerer

Last week, 10 Republicans voted to impeach Mr. Trump. Now, many face battles of their own.

Trump allies, donors and political aides are rushing to support primary challenges against House Republicans who crossed the former president.

“Wyoming taxpayers need a voice in Congress who will stand up to Nancy Pelosi and the Democrats, and not give them cover,” State Senator Anthony Bouchard said in a statement. He’s one of several Republicans expected to announce campaigns against Representative Liz Cheney of Wyoming who was the only member of House Republican leadership who supported the impeachment effort.

The primary challenges are part of a broader push by Trump supporters to maintain control of the Republican Party, which now faces deep internal divides over whether to stick with the populist ideology and divisive rhetoric that defined the party’s message during the Trump administration. Many establishment Republicans would like to embrace a more inclusive platform that could help them win back suburban voters who fled the party in the 2020 elections.

Trump allies believe such a move would be a mistake, costing them the backing of white working class voters who turned out in droves to support the president.

In Michigan, a key battleground state that Mr. Biden won in 2020, Trump allies are supporting the candidacy of Tom Norton, a military veteran who is challenging Representative Peter Meijer in a rematch of their 2020 primary race.

“I said, ‘Peter, if you impeach him, we’re going to have to go down this road again’,” Mr. Norton said on Steve Bannon’s podcast to promote his candidacy. “The morning of the impeachment vote, he called me and said: ‘Tom, you might have to put your website back up. I’m voting for impeachment.’”

… That’s the number of executive orders, memorandums and proclamations by Mr. Biden on his first day in office.

Thanks for reading. On Politics is your guide to the political news cycle, delivering clarity from the chaos.

On Politics is also available as a newsletter. Sign up here to get it delivered to your inbox.

Is there anything you think we’re missing? Anything you want to see more of? We’d love to hear from you. Email us at onpolitics@nytimes.com.

Barr Defends Right to Intrude in Cases as He Sees Fit