Israeli police deployed water cannon and arrested 55 people overnight at a protest in Jerusalem against the country’s indicted prime minister, Benjamin Netanyahu, and his government’s handling of the coronavirus pandemic.

A few thousand people had gathered in the city for what have become frequent rallies against Benjamin Netanyahu.

The prime minister, facing an ongoing corruption trial that includes a serious charge of bribery, is fighting fresh public discontent after a recent surge in the number of Covid infections.

Demonstrators have rallied near Netanyahu’s official residence on Balfour Street in recent weeks. On Thursday night, the last day of the working week in Israel, mostly young people in masks and bandanas gathered at a nearby intersection for a predominantly peaceful protest, including a small outdoor orchestra performance.

Several hours later, there was a standoff, with police attempting to disperse the protesters, some of whom stood their ground. Later, authorities drove large white lorries into the area and turned water cannon on the crowds. Protesters complained were pinned down even when they attempted to leave.

Officers arrested 55 people for causing public disorder and disturbances, a police spokesman said. Many people were released, but 20 appeared in court on Friday morning.

Anti-Netanyahu rallies have been held for months, mostly focused on his trial, which began in May. The prime minister is alleged to have accepted hundreds of thousands of pounds in luxury gifts from billionaire friends and intervened in media legislation in exchange for favourable news coverage.

Netanyahu, the first serving Israeli leader to go on trial, has denied any wrongdoing, alleging he is the victim of a politically motivated witch-hunt. In polls, his governing Likud party retains significant support, albeit damaged. Smaller pro-Netanyahu gatherings have also been held in Jerusalem. 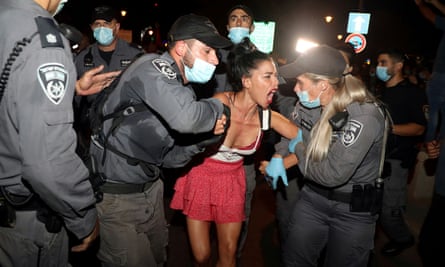 Police in Jerusalem detain a woman during a protest early on Friday. Photograph: Ammar Awad/Reuters

However, the rallies against him have grown in size and frequency after a second surge in coronavirus cases hit the country this summer. The government has been accused of mishandling its economic response.

Unemployment has risen above 20%, and aid packages have been slow to roll out. Netanyahu has said he intended to give cash handouts to all Israelis, but the proposal was swiftly criticised as impractical. One prominent Israeli columnist criticised the plan as the equivalent of “handing out bribes to the masses”.

On Wednesday, Israel’s parliament, the Knesset, passed a law granting the government extra powers to declare a state of emergency, further angering the protesters.

Israel, with a population of 9 million, has reported almost 58,000 coronavirus cases and 442 deaths, with recent daily infection figures rising close to 2,000.

Malaysia to hold inquest into Nora Quoirin’s death next month