The Nigeria international striker could be the next high-profile star for the domestic league, with his departure from the French top-flight club

Desire Oparanozie has revealed it ‘will not be a big deal’ for her to join a Nigeria Women’s Premier League club after she parted ways with French outfit Guingamp.

The abrupt end of the Division 1 Feminine 2019-20 season in France due to the coronavirus pandemic brought an end to her six-year-long journey with the club.

The 26-year-old had joined the French top-flight club from Turkish women’s side Ataşehir Belediyespor in 2014 and scored 45 goals in 106 appearances during her sojourn.

Having confirmed her exit this week, the striker, who is now a free agent, admits she is open to the possibility of moving on to join a Nigerian club.

“My contract with my French club ends in June, so I decided not to renew it because I needed to explore other avenues,” Oparanozie was quoted by the Guardian.

“Some clubs want me to join them, but I have not taken any decision. If there is a need to come back to Nigeria to play in the women’s league, I will play.

“Nigeria’s league is tough and competitive, but the only issue is inadequate facilities. I started my football career in the Nigerian league, so coming back home will not be a big deal for me.” 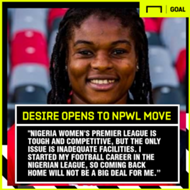 Oparanozie had previously starred for Bayelsa and Delta Queens in Nigeria, winning two titles with the Warri based outfit before making her move to Europe in 2011.

The former Super Falcons captain, who led the team to the Women’s World Cup Round of 16 for the first time in 20 years last summer, also appealed for improved support to the women’s team.

“The French women’s national team worked very hard under a conducive atmosphere to get to where they are now,” she continued.

“For Super Falcons to get it right, the administrative aspect has to be okay, but the team does not have all the time in the world considering the level of competition we are getting from other African countries now.

“The federation should pay Super Falcons’ allowances and bonuses in line with the girls’ output and honour they bring to the country.”

‘Nothing is impossible’ – Gerald Phiri on Malawi’s World Cup ambition

In Waukegan, 50 Businesses Were Looted, 16 Arrested During Violent Protests

‘This is another important step for justice,’ Klobuchar tweets

Should El Hadji Diouf be considered an African great?

In Waukegan, 50 Businesses Were Looted, 16 Arrested During Violent Protests

‘This is another important step for justice,’ Klobuchar tweets

Should El Hadji Diouf be considered an African great?