A thug who murdered his girlfriend’s three-month-old baby because she started looking like her biological father has been jailed for at least 18 years.

Davey Everson, 23, claimed Millie-Rose Burdett had choked in Hertfordshire in December 2018 while her mother, Kirsty Burdett, 25, helped him cover his tracks.

But when the tot was rushed to hospital doctors found she had suffered a bleed to the brain, from being violently shaken and thrown into her cot.

Burdett witnessed Everson shove a bottle into Millie-Rose’s mouth so forcefully it began to bleed, but allowed him to keep feeding her daughter and continued her relationship with him.

Today at the Old Bailey, he was sentenced to life imprisonment with a minimum term of 18 years.

Burdett was jailed for six years after the court heard how she claimed bruises on Millie-Rose’s face were from a fall when in fact her boyfriend was responsible. 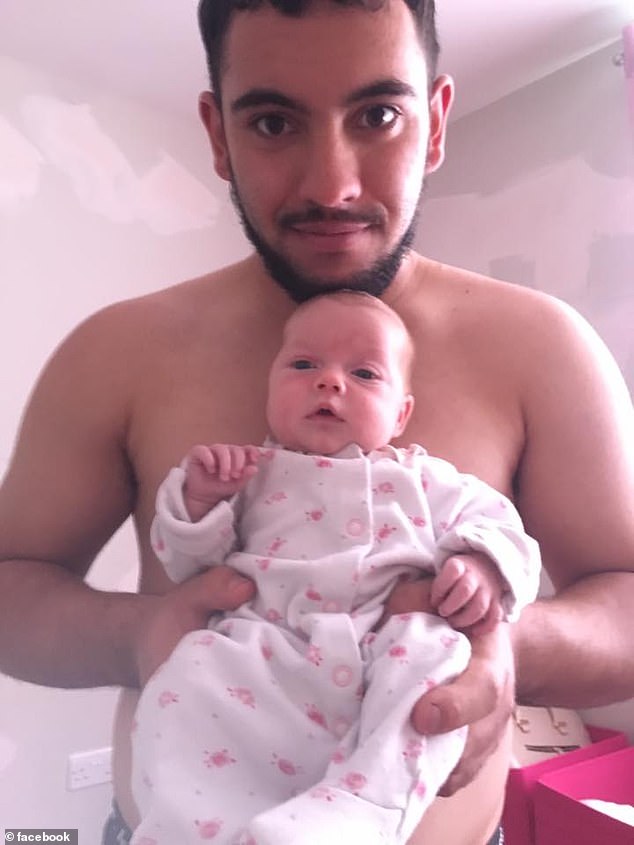 She has suffered horrific injuries including head trauma, 12 fractures to multiple ribs, leg fractures and compression fractures to her spine.

The fatal injury was caused by Everson by hurling her into a cot at the mother’s home in Hertfordshire.

He had become frustrated while feeding the baby girl, swearing at her when she struggled with a large bottle she could not fit in her mouth.

And despite initially volunteering to care for her, he lost interest when she began looking more like her biological father.

The judge said it was clear Everson had ‘deliberately’ killed the tot and not simply lost control in the heat of an impatient moment.

Jurors at St Albans Crown Court convicted him of murder and a separate charge of cruelty to a person aged under 16 involving another young child who cannot be named.

He was also convicted of a charge of cruelty to a person aged under 16 involving another young child who cannot be named for legal reasons.

Burdett was convicted or causing or allowing the death of her daughter and the neglect of a person under 16.

The mother, wearing a silver puffer jacket and black mask at the Old Bailey today, wiped away tears with a tissue as the court heard devastating facts of the case.

Everson sobbed alongside her in the dock wearing a Nike jacket as the court heard mitigation that he was ‘immature’ and ‘ill-equipped’ to care for a child.

Jane Bickerstaff, defending Everson, said: ‘In relation to the minimum term our submissions are these this offence happened within a very short compass of time. 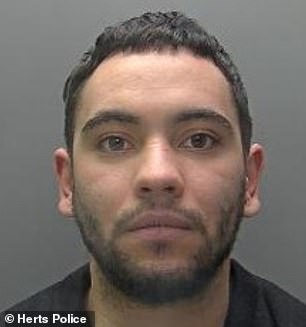 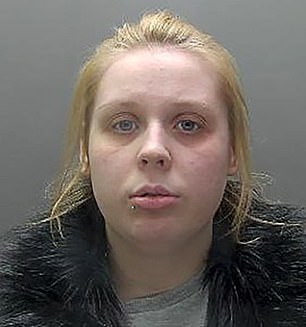 Davey Everson, 23, left, claimed Millie-Rose Burdett had choked in Hertfordshire in December 2018 while her mother, Kirsty Burdett, 25, right, helped him cover his tracks

‘Fourthly, that it was no doubt instantly regretted. This distinguishes it from many the court has dealt with in that Davey sought help immediately, in alerting the mother and ensuring emergency services were alerted immediately.’

‘He was 21… And certainly he was immature in his age and that can be seen in the sort of text messaging that went back and forth between him and Ms Burdett.

The court Everson has an IQ of just 65, placing him in the intellectual bracket of ‘mild learning disability.’

‘His age, immaturity and low intellect must have impacted on his ability to cope in this situation with a new baby and he is a completely inexperienced parent and we submit ill-equipped to cope,’ Ms Bickerstaff added.

Sean Larkin, defending Burdett, said she had suffered depression since the age of 16 and told the court Millie-Rose’s death had had a ‘devastating impact’ on her.

‘Although people say she brought that on herself the evidence was that she was a good mother. Millie-Rose’s father described her as a wonderful mother and the people who knew her best saw those qualities in her.

‘She did take a course on domestic violence and it’s set out in her letter she can now reflect on earlier relationships including with Mr Everson and see them in a different light,’ Mr Larkin said.

Passing sentence Mrs Justice Cheema Grubb said: ‘Millie-Rose Burdett was just two moths old when she was taken to hospital having collapsed in your care.

‘You Kirsty were pregnant by a previous partner. You were both hotheaded and as your text conversations show you would argue fiercely and then make up.

‘When Millie-Rose was born you [Everson] expressed the intention to step in and become a father to her.

‘You were both given advice by flanks of social workers, support visitors and senior midwives. Your mother Kirsty Burdett was round nearly every day when Millie Rose came home from hospital. You had many sources of help but all your promises were empty.

‘You continued use excessive force when feeding and playing with her. She was a young baby and she cried. You swore at her when she struggled with a large teet on her bottle.

‘When you Burdett finally admitted to police after arrest that you knew Davey was being violent to her it was not enough to protect Millie-Rose.

‘You could have protected Millie-Rose. Everson didn’t live with you every night. 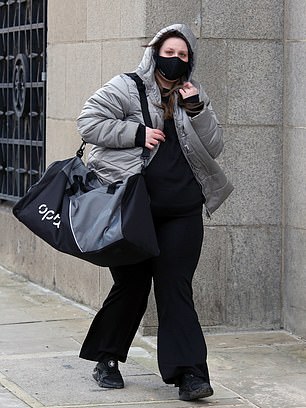 ‘You knew this young man was immature…But in reality you didn’t care enough to remove her from the risk he obviously posed of causing her serious harm.

‘You had an argument evidenced by texts exchanged. Millie-Rose was beginning to resemble her biological father and this riled you.

‘I am sure that in your mind this was a personal rebut to you and being a father figure to the child was no longer such an attractive prospect.

‘On 14 December the two of you argued again. Kirsty later told the police she was planning to end the relationship but needed Davey’s money to buy food.

‘You argued loudly and your neighbour heard shouting and screaming but then you went out shopping together.

‘Despite the ferocity of the argument and all you knew of you left him alone to feed her.

‘He didn’t want to feed. He was lying in bed ready to watch a film… Millie-Rose was fatally injured. He brought her into you and she was floppy in his arms.’

‘You Everson claimed variously that Millie-Rose had choked or lost consciousness while you were feeding her.

‘The truth is there was no reason for her to have lost consciousness without assault. You had shaken the baby violently leading to severe brain damage.

‘You had caused four fractures to her spine which would have required severe force.

‘You even denied you had shaken her when asked directly in interview.

‘I sentence you on the basis that you were angry and the baby was crying or not doing what you wanted to do.

‘The evidence is of a more deliberate and more extensive assault.

‘I am sure you inflicted these four different assaults… You have expressed no remorse.’

Sentencing Everson, Mrs Justice Cheema-Grubb described Millie as ‘particularly vulnerable’ and said Everson ’caused her acute and lasting pain for half of her short life due to forceful and sustained assaults’.

The judge said Burdett was able to seek help but didn’t and that although she loved Millie she put her own needs above those of her daughter.

Senior Investigating Officer Detective Inspector Iain MacPherson from the Bedfordshire, Cambridgeshire and Hertfordshire Major Crime Unit said: ‘This is a really tragic and heart-breaking case. Little Millie-Rose spent much of her short life in pain due to Everson’s cruelty. He has never shown any remorse or explained why he assaulted her.

‘I would like to recognise the dedicated work of medical staff who tried to save Millie-Rose, and those medical experts who in the absence of any explanation from Everson, were relied upon to determine what happened to her.

‘Thanks also go to Detective Constable Vicki Twyford who was commended by the judge today. The investigation team all worked tirelessly to establish how Millie-Rose came about her death and ensured that those responsible were brought to justice.

‘Our thoughts are with the family members who genuinely cared for and loved Millie-Rose.’

Following the sentencing Millie’s father said: ‘The loss I feel at the moment and have done for the last two years is something words can’t explain, there is a hole that will never be replaced.

‘I am glad that justice has been served.

‘I would like to place on record my thanks to the police and the Judge and jury for all their work in bringing justice for my daughter.’

Gay Man Who Had Two-Hour Sex With Partner Has Wife, Children— Delta Resident

The best sales to shop today: Samsung, Madewell and more