NRL star Jarryd Hayne’s alleged rape victim said she was too afraid to go to the police because ‘he would have the money to ruin’ her, his rape trial has been told.

The woman, now aged 28, told a Newcastle District Court jury on Wednesday she went to see the doctor three days after Hayne had sexually assaulted her in her bedroom.

She said the doctor inspected the injury to her vagina and told her: ‘It looks like a bite’.

The woman said the doctor spoke about reporting what had happened to the police but she was reluctant.

She had earlier sent a text message to a girlfriend saying she didn’t want to go to the police because Hayne would have the money to ruin her and the last thing she needed was for her life to be in the public eye. 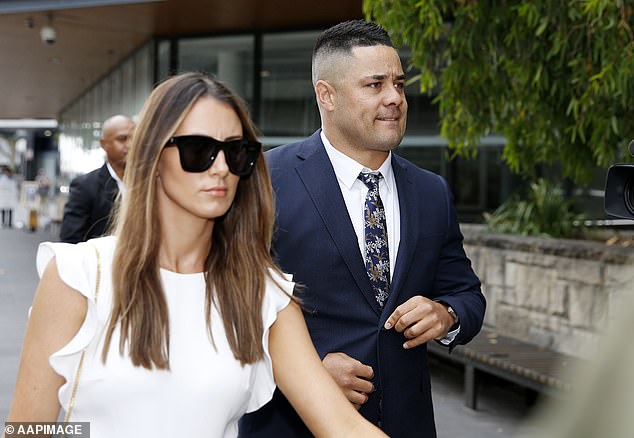 NRL star Jarryd Hayne’s alleged rape victim said she was too afraid to go to the police because ‘he would have the money to ruin’ her, his rape trial has been told. Hayne is pictured arriving at Newcastle Court on Monday

Hayne, who had been celebrating a friend’s bucks party in Newcastle, had paid a taxi driver $550 to take him to Sydney before asking her to stop at the woman’s house for 20 minutes.

On Tuesday the woman told the court she wanted to get to know Hayne and hoped they might have a future together, but he only had one thing on his mind.

She decided they were not going to have sex after hearing Hayne’s taxi driver waiting for him outside her house beeping her horn.

‘There was no way in hell I was going to touch him,’ the woman said.

‘I felt like it was obvious what he wanted. I felt sad and stupid for flirting with him.’

She told the jury she felt angry and hurt because ‘he was a sleaze’ and saw her as an object.

Crown prosecutor Brian Costello has told the jury Hayne attacked the woman in her bedroom after she invited him to her house on the outskirts of Newcastle on September 30, 2018 – the night of the NRL grand final.

Mr Costello said Hayne arrived at about 9pm and stayed for about 45 minutes, committed two sex acts on her and caused two separate injuries to her genitalia before leaving.

The woman’s mother was in the house watching the grand final.

The woman sent Hayne a text message about 20 minutes later saying: ‘I am hurting so much’.

She sent him another text message about 25 minutes later saying she knew they had talked about sex in previous messages on social media, but she ‘didn’t want to do that after knowing the taxi was waiting for you’.

The woman told Hayne she was sitting on her bed crying because she felt weird.

The woman sent Hayne a text message about 20 minutes after he left saying: ‘I am hurting so much’

The woman later sent text messages to a girlfriend saying she thought Hayne had bitten her vagina and she felt violated.

The woman said she sent a Snapchat message to Hayne telling him her girlfriend wanted her to go the police and he replied: ‘What?’

She claimed he sent her another message some time later asking: ‘Any allegations?’

When they were first in the bedroom Hayne was singing along to Ed Sheeran songs on YouTube which the woman thought was weird.

She told the jury Hayne tried to kiss her and she said ‘no’ before he pushed her face down into the pillow and pulled her pants down.

‘I was saying, ‘Don’t, no I don’t want to’ and then I was bleeding everywhere,’ she said.

‘I think I froze. I can’t remember a massive struggle. It was really confusing. He knew I didn’t want it. It wasn’t pleasurable, it wasn’t something I asked for.’

The woman said seeing the blood stopped Hayne and he went to the bathroom to wash the blood from his hands.

She said she had a shower before Hayne told her he had to go and didn’t apologise. 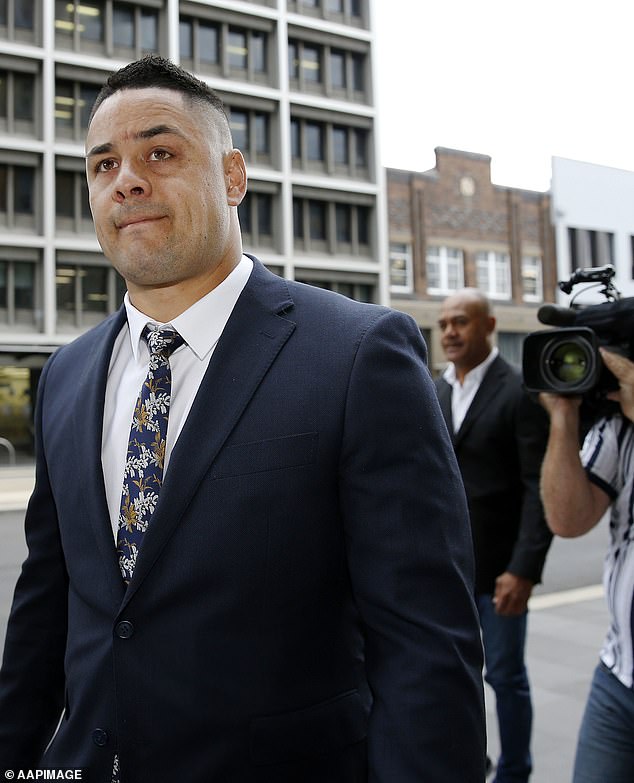 The woman did not initially go to police after the alleged sexual assault but eventually told her mother, sister and brother-in-law about it.

She said her brother-in-law was angry and later told her he had contacted the NRL integrity unit and asked if she was comfortable speaking to them.

The woman agreed, saying she was scared but eventually decided to speak to police who then asked the woman to send Hayne messages on Snapchat to see if he would respond.

She sent Hayne a message saying he knew she wasn’t OK from the damage caused to her on the night and he should have stopped when she told him ‘no’.

Hayne replied: ‘WTF are you on about? I stopped straught (sic) away and made sure you were OK. You’re starting to sound suss.’

The prosecutor had earlier told the jury police also tapped Hayne’s mobile phone and in one call to another rugby league player, Hayne said the woman ‘got filthy’ and ‘wigged out’ when she realised he had a taxi waiting for outside.

Hayne told the footballer they had been fooling around when the woman started bleeding and his fingernail must have clipped her. 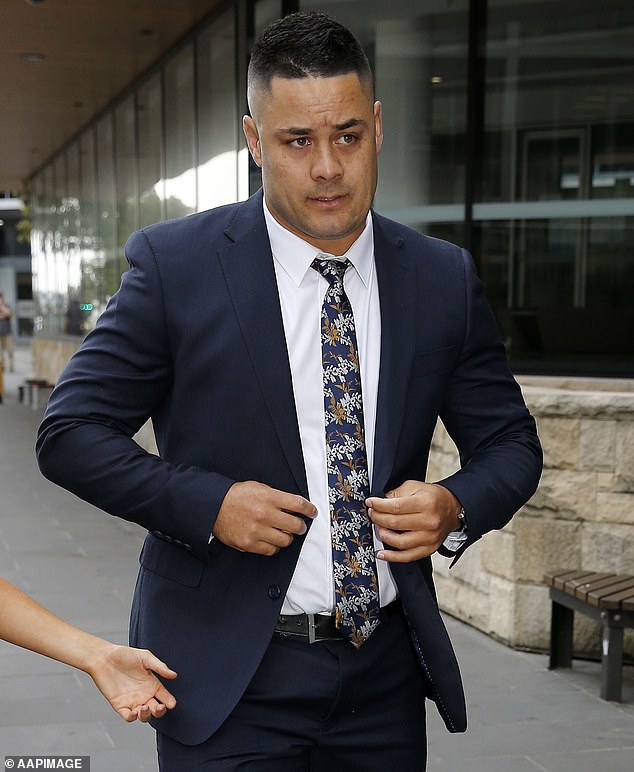 Hayne, who had been celebrating a friend’s bucks party in Newcastle, had paid a taxi driver $550 to take him to Sydney before asking her to stop at the woman’s house for 20 minutes

The woman had first contacted Hayne on Instagram on September 17 2018 when he was in Dubai saying: ‘You are absolutely gorgeous x”.

They began exchanging flirty messages on Instagram and Snapchat.

‘Some of the things I said were to get him to like me and that’s embarrassing,’ she said.

Mr Boulten said it appeared Hayne had accidentally scratched the woman with his fingernail causing her to bleed which shocked them both.

‘It was not a happy ending for either of them,’ he said.

‘They both intended to have sex. It was not going to be romantic unfortunately but it was going to be sexual.

‘He believed he was being invited to have sex and she expected it would happen.

‘He was not there to overbear her will.’

SHANE WATSON reviews last night’s TV: How to buy on Amazon without selling yourself down the river

Coffs Harbour: Body is recovered after a 20-year-old man was swept off a breakwall by a wave

Trump and Justice Dept. Lawyer Said to Have Plotted to Oust Acting AG